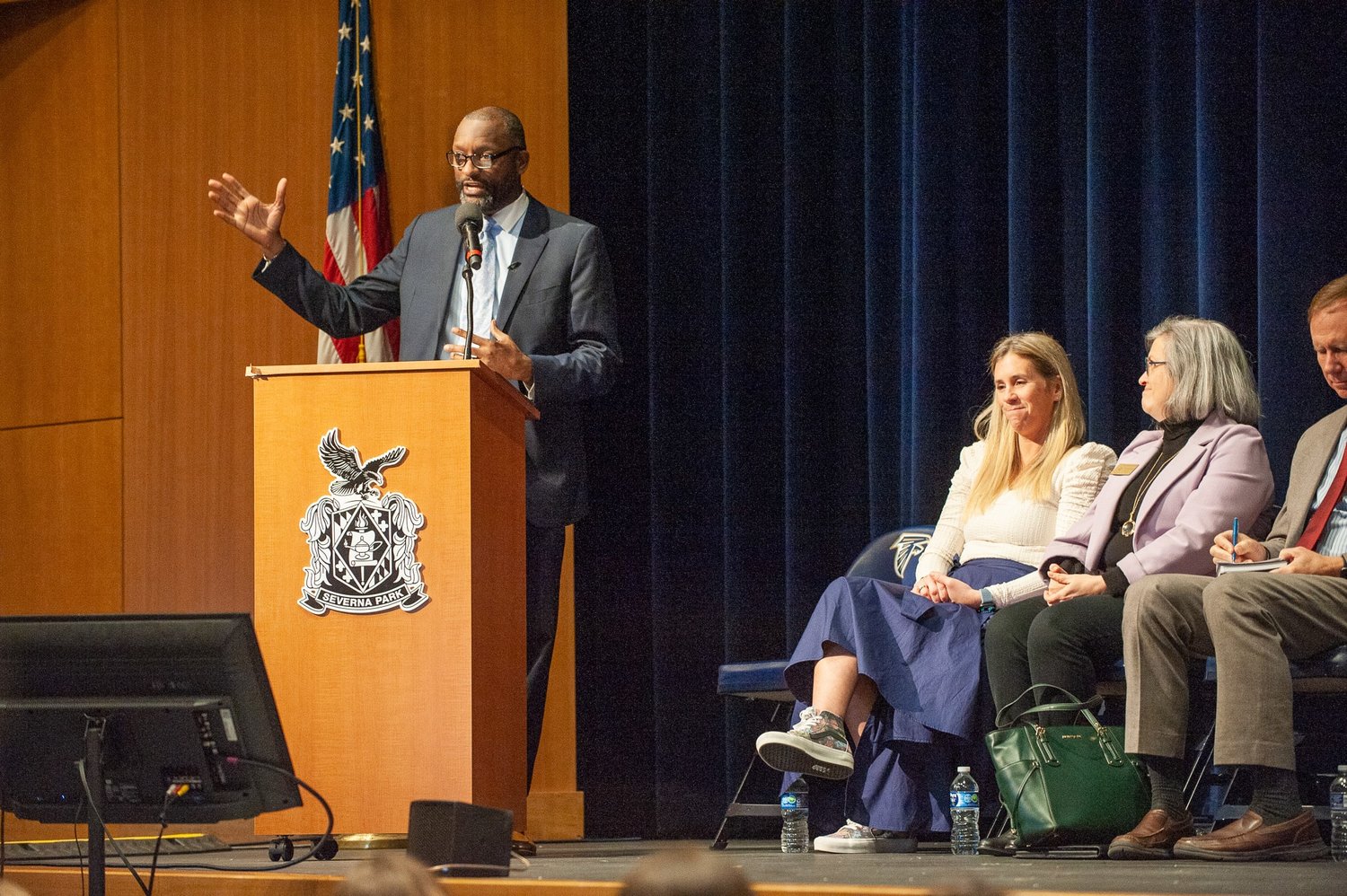 Superintendent Mark Bedell said he wants students to see themselves reflected in the curriculum from “a resiliency lens, not a deficit lens.”
Posted Tuesday, January 24, 2023 4:36 pm
Next Steps

Grade-level assemblies during the week of January 30 to address the responsibility of “see something, say something” and changing the narrative of Severna Park High School

Advisory lessons of being an upstander vs. being a bystander

A kindness and anti-bullying campaign

The event followed recent videos that were made public of a student at Severna Park High School bullying a special needs student with threatening, obscene and racist language.

“That’s not who we are,” said Severna Park High School Principal Lindsay Abruzzo. “I will not tolerate it moving forward.”

Abruzzo also informed the crowd that the perpetrator in the video is no longer a student at the school.

The original video was taken during lunch on January 4, according to an investigation. On January 10, the video was airdropped to students at Severna Park High School. Shortly after, students and staff members formed a line at the main office to report the incident. School officials said the bullying was reported to appropriate agencies and offices, including the police.

On January 13, Abruzzo addressed the student body over the intercom and requested that students look to their left and right and say a kind thing that will leave a positive impression on their classmates.

Abruzzo said she fielded phone calls from around the world in the following days as the video went viral.

She emphasized that she wants kids to feel proud to be Severna Park High School students.

“Sure, there are some ups and downs,” she said. “Sure, we have issues as does everyone else. But that video does not define my students and my children. It doesn’t define who we are. Severna Park is way bigger than that, and all my kids should be proud to say that they go here.”

Bedell stressed acceptance, accessibility and sense of belonging during his remarks while noting that he was meeting with the police chief the following day to address hate issues in the county.

“The perception is the reality,” Bedell said.

To that point, County Executive Steuart Pittman noted that Anne Arundel County had the highest number of hate bias reports in Maryland during his first year in office. As of 2021, Anne Arundel was No. 4 behind Montgomery, Baltimore and Howard counties according to the Maryland Department of State Police report.

During the break-out discussions that occurred at the high school, several parents expressed that Severna Park neighborhoods are tight-knit to a fault. A trait that some say bleeds over into the schools.

“There’s a lot of exclusion based on the neighborhood you live in,” said one participant.

Other attendees shared their beliefs that kids are segregated at lunch, teacher equity days are not effective, and the school system should provide more community service opportunities that empower kids to help people of different backgrounds.

“It’s a societal issue,” he said. “It’s not just one kid at Severna Park.”

Swann said he was optimistic following the community conversation.

“This event gives the community, the staff, the parents and the students a way to discuss these heavy-duty issues.”

Some Severna Park High School students say communication at their school must improve for meaningful change to occur.

“I didn’t know I could just walk into the counselor’s office without an appointment until I was an upperclassman,” said senior Elliot Gerig, who serves as the school’s Student Government Association ambassador.

Gerig added that information doesn’t always filter down to the student body, which causes compartmentalization of information that could benefit everyone.

“We need to come together,” Gerig said.

Severna Park High School senior Aidan Judge noted that he spent a lot of time interacting with special needs students during elementary school, but his tenure as a Falcon has been different.

“I can’t think of a single time I’ve interacted with a special needs student at our school,” Judge said.

Severna Park senior Jayna Monroe said she aims to foster diversity and inclusion with social justice as part of the school’s equity club.

“The people that need it the most weren’t going to be here,” Monroe said following the event.

Judge shared the pride he felt in Severna Park watching Parijita Bastola’s recent run on national television with NBC’s “The Voice” and how that pride changed as the recent video circulated around the world. He also recounted a recent swim meet, where he serves as team captain, that occurred soon after his school started making headlines for the wrong reason.

“It’s clear what you’re associated with,” Judge said. “How was I supposed to show school spirit?”

Monroe noted that students at her school each have their own clusters and it makes it hard to truly get to know a lot of their peers.

While many of the seniors at the discussion said they were pleased the video was released to bring attention to bullying, they also echoed a sentiment shared by Bedell during his remarks.

“What about the things that aren’t on video?” Judge said.

Gerig said the school’s SGA and student body are a resilient group as he listed off initiatives that students are spearheading in the face of the recent adversity.

Zach Sparks contributed to this story.