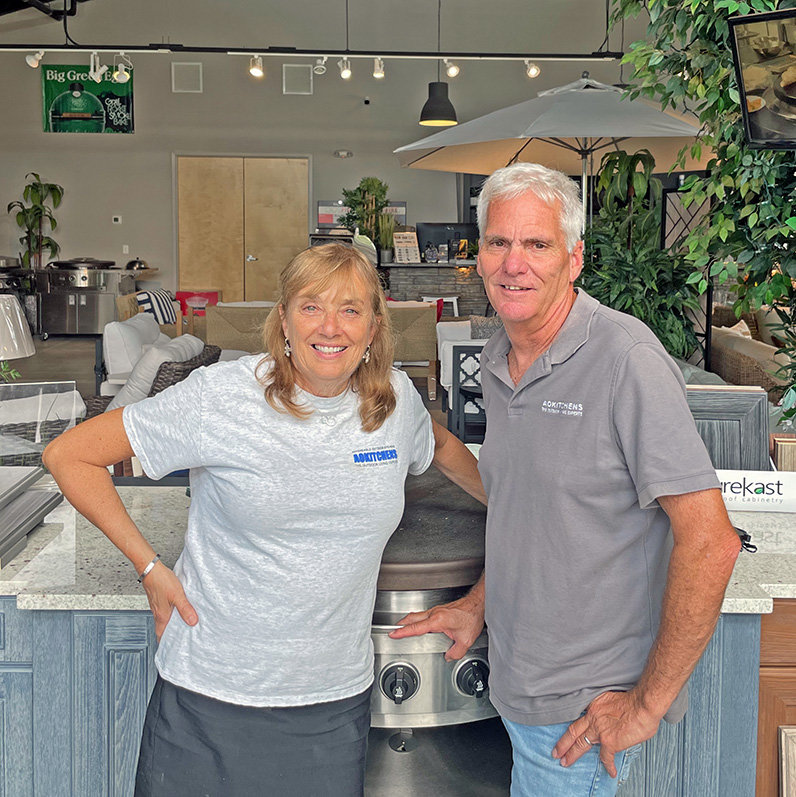 Years before Karen and Kevin Fox would sell their first outdoor kitchen appliance, they were on the hunt for their own.

“We loved the idea of the built-in grills — it was just kind of a new thing,” Karen said. “They were so expensive, I’m like, ‘Oh, we can maybe buy the grill, but we can’t afford these islands.’ I got down on my hands and knees and kind of crawled underneath it and I’m like, ‘These are steel studs! I feel like we can build this ourselves!’”

“The deck that never got used turned into the place where everyone hung out,” Karen said.

What began as a home improvement and change in their social habits had a ripple effect in the form of a booming family business – Affordable Outdoor Kitchens.

Kevin, who at the time worked in lighting, learned from the contractors with whom he worked that oftentimes homeowners were ordering various outdoor kitchen pieces online without much guidance, resulting in mismatched appliances that ultimately didn’t work together. After pitching his employer on the idea of carrying outdoor kitchens failed, he decided to go a different route.

“He said to me, ‘You know it’s not a conflict of interest; let’s take some money and we can buy a truckload,’” Karen recalled. “It was Bull barbecue [grill]. We still sell it.”

Their grill-selling side hustle lasted two years. By 2013, Kevin made it his full-time job, and within another year, they had a storefront.

“We just were like failure is not an option, so let’s just do this,” Karen said.

Today, Affordable Outdoor Kitchens is situated off Generals Highway in Millersville, still run by Kevin and Karen along with their adult sons and their families. The business has expanded from selling grills in the back of a pickup truck to having one of the largest selections of outdoor kitchen appliances and furniture within several states.

“There’s nobody else doing what we do in Maryland,” Karen said, and they have the clientele to prove it.

Their customer base sprawls in every direction: New Jersey, West Virginia, Virginia, and the Maryland and Delaware beaches. They’ve even sold an outdoor kitchen to a former president of the United States.

“I wanted to hide in the truck and meet him, but the boys talked me out of it,” Karen said.

The Fox family prides itself on, and attributes their business success to, excellence – in the brands they carry, their knowledge of the products and their customer service. Whether it’s teaching a contractor or homeowner how to use their appliances, inviting customers to come and try the grills for themselves in the store, or going to a customer’s home to cook with them, the team at Affordable Outdoor Kitchens ensures a quality experience for their customers.

“I always say that we’re a customer service company that sells things,” Karen said. “You can buy a picnic table or $60,000 worth of cabinets and grills, but you’re going to get the same level of service regardless.”

One could argue that another tenant of their success is the marriage on which it was founded – Karen and Kevin, who were high school sweethearts at Severna Park High School, will celebrate their 44th anniversary this October.

“I still love him to pieces,” Karen said of Kevin, who she also referred to as the heart and soul of their business. “Not many people could do seven days a week together, 24 hours a day.”

Kevin’s role has evolved with time – handing over much of the sales to his sons while he remains the problem-solver-in-chief. He joked in passing that he’s ready to retire.

While retirement may not be here just yet, the couple is confident that when the time does come, the company will continue to flourish.

“Watching my kids be successful, watching them start to take the reins and run with it and watching this business grow because of what they’re doing now, not because of what Kevin and I are doing … As a business owner that has employees, whether they’re your kids or not, to watch them embrace what you’ve built and do better, there’s nothing better than that. That’s the good stuff,” Karen said.