An MS Diagnosis When Things Don’t Add Up 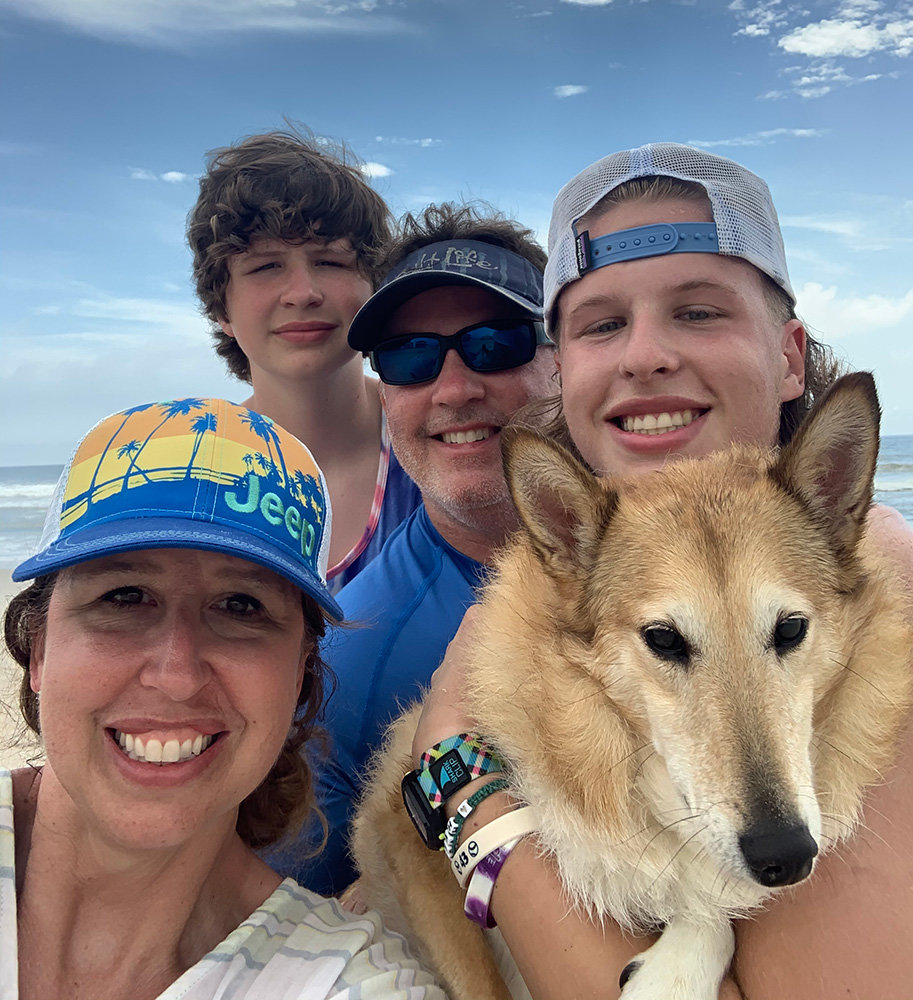 She’s the friend who drops everything to check on those in her circle. She’s the first parent to take charge when there is a need with her children, other children or their school. Her larger-than-life bouncy curls are understated compared to her exuberant personality. She effortlessly balances a large loving family, a vast net of close friends, a challenging and rewarding career, and endless community commitments with unmatched energy, joy and dedication.

There is nothing that Jennifer Whitlock cannot accomplish with flying colors, and no obstacle she cannot overcome — not even multiple sclerosis.

“It’s not the worst thing that could happen,” said Whitlock, who was diagnosed with multiple sclerosis on May 10, 2022. “I could ask ‘why me?’ but I am really just more grateful that I didn’t wait even one day longer before tackling this head on.”

After Whitlock spent too much time with strange symptoms that she chalked up to getting older or a random pain, the MS diagnosis was confirmed with two MRIs showing multiple lesions indicating demyelination. However, in hindsight, Whitlock feels she may have been living with the chronic disease for at least four years. With MS, the person’s immune system attacks the nerve fibers and myelin sheathing, which insulates the brain and spinal cord.

Then in her mid-40s, Whitlock was experiencing fatigue, symmetrical pain, brain fog, numbness and a pins-and-needles sensation. Although none of her blood markers indicated rheumatoid arthritis (RA), her symptoms did present as RA, and she was given an RA diagnosis. Medication provided minimal relief, but Whitlock believes she subconsciously minimized her symptoms and chalked them up to getting older or being stressed and busy.

After several people close to her were diagnosed with dementia, Whitlock started to wonder if maybe she was also losing her mind. She saw a specialist and was relieved when she passed all the cognitive tests. Still not convinced, Whitlock requested an MRI. The results were surprising: multiple brain lesions.

Whitlock was immediately referred to a brain neurologist whom she soon learned possesses the same take-charge attitude as she does. The immediate plan of action? Go in aggressively with the expectation to severely halt the progression of MS.

“I have an amazing neurologist who fast-tracked my treatment and have already received two infusions from a rockstar infusion nurse; however, it will take many months to feel the impact of the infusions,” Whitlock said.

Her concerned and large family encouraged her to post an update on Facebook so that relatives could follow her treatment. Whitlock had already discussed her diagnosis with her employer, but was she ready to make such a visible post by going Facebook-official to all of her network?

“God gave me a loud voice and an extended frame, so while I am not Selma Blair or Christina Applegate (both actresses living with MS), I will use those ‘gifts’ to bring awareness and treatment advancement as much as I can,” Whitlock said.

Bruton’s tyrosine kinase (BTK) inhibitors, an emerging type of disease-modifying therapy for MS, have given her hope.

“I’m excited about the late-stage clinical trial pipeline for a new class of BTK inhibitors, and if I’m a candidate, I’m absolutely enrolling,” she said.

After her Facebook post, Whitlock said she heard from many acquaintances, and been counseled by a few friends who have MS, advising her on how to best manage this disease. She monitors and records her triggers as best she can and provides that information to her physician.

“Physicians are the experts in their chosen fields, and we absolutely could not live without them,” she added. “They have all the diagnostic tools, the CTs, the MRIs, but they cannot judge what you are feeling. Be in tune with your body and how it’s feeling, and when those feelings change.”

Whitlock encourages everyone to be better patients by always carrying a notebook and taking notes, which can be shared with a medical team.

“Don’t let go of something that you think is awry,” Whitlock said. “Doctors are there for us, but we must do our job, too. Advocate for yourself. I have been blessed with an amazing group of physicians over the years, but I wish I had voiced my concerns louder and more often. You know your body better than anyone, and you need to use your voice to fight for answers.”

Whitlock is a team mom for the Severna Park High School unified bocce and tennis teams, roles she won’t give up. And she’s going ahead with starting her Master of Business Administration degree through the University of Oklahoma this fall.

“Jennifer is one of the most enthusiastic, energetic people I know! She is always willing to jump in and get things done, be there in full force and with a smile on her face,” Dennis said. “While I was devastated to hear the news of her diagnosis, I know if anybody can tackle this head on, it’s Jen Whitlock. She has such an upbeat, positive energy and spirit, which will help her manage this disease. She’s a wonderful person and a true friend. I look forward to working with her next year as team moms for unified sports.”

Whitlock knows that the long-term prognosis for MS patients looks different for everyone, but she feels the diagnosis has given her a new perspective on her life.

“I want to go do all the things with all the people I love. I want to dance with my sons at their weddings. I don’t want Albert to push me in a chair. I want to run again,” she added.

Facing the diagnosis with her trademark drive and exuberance, Whitlock, a health care consultant, added, “I have an overwhelming sense of privilege right now. I have great health insurance. I am an educated woman with health care and pharmaceutical experience. I am ready to move this forward.”