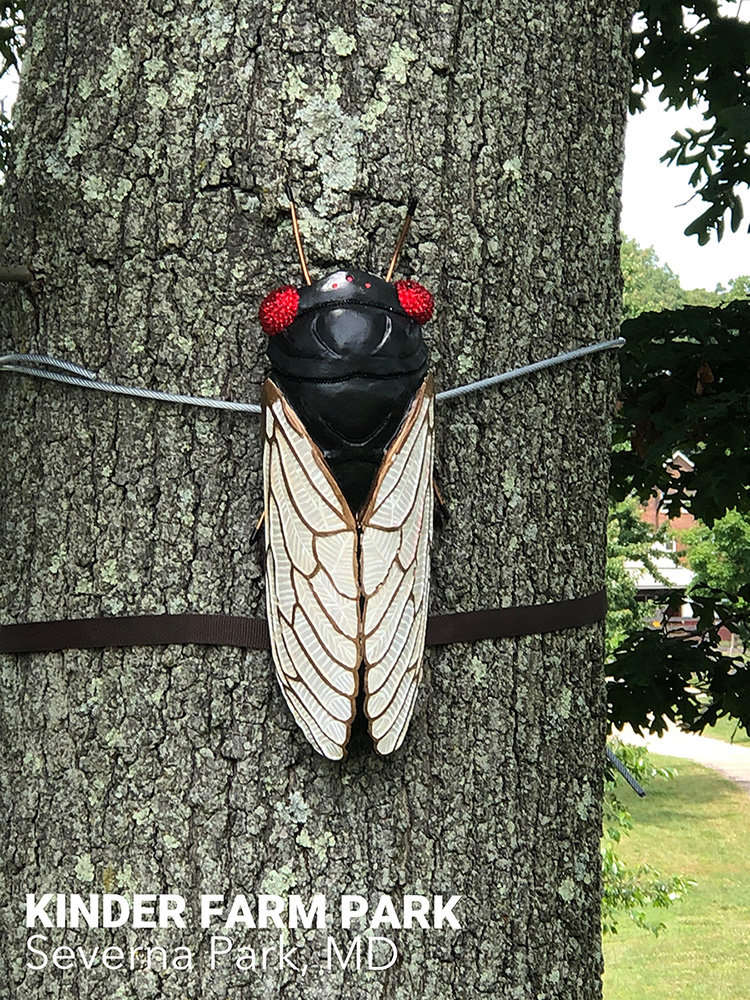 When she heard that artist Michael Bowman started the Cicada Parade as a tribute to the 17-year cicadas and America’s emergence from the pandemic, Severna Park’s Carolyn Fite knew she wanted to bring the art to Kinder Farm Park.

An artist from the Formstone Castle Collective in Fells Point, Bowman carved all the blanks from plaster of Paris and then made silicone molds.

“He intended to only make 100 plaster cicadas to be adopted and decorated by local artists to be displayed in downtown Baltimore,” Fite said. “When people heard the story on the local news, everyone from all around the state wanted to be involved. I certainly did!”

“My inspiration was a great-aunt who wore jewel-encrusted bug jewelry, and I thought it was a fitting tribute to an often-maligned little bug who is a true miracle of nature,” Fite said.

Wanting to represent Severna Park and Millersville, Fite contacted Kinder Farm Park Superintendent Brad Hunt, who allowed her to hang a plaster cicada on a tree near the swing by the visitor’s center.

“We are now represented on the map and the 18-inch, eight-pound cicada will be displayed at Kinder Farm Park until early September,” Fite said. “His name is Plácicada Domingo. He has red crystal glass rhinestone eyes. I hope people will be kind to him.”

To access a map and find other cicada art, visit www.cicada2021.com.

“I'm so grateful to Michael Bowman,” Fite said. “He had the vision, the talent and the generosity of spirit to share it. Artists, just like the bugs, have also emerged from all over to join in.”