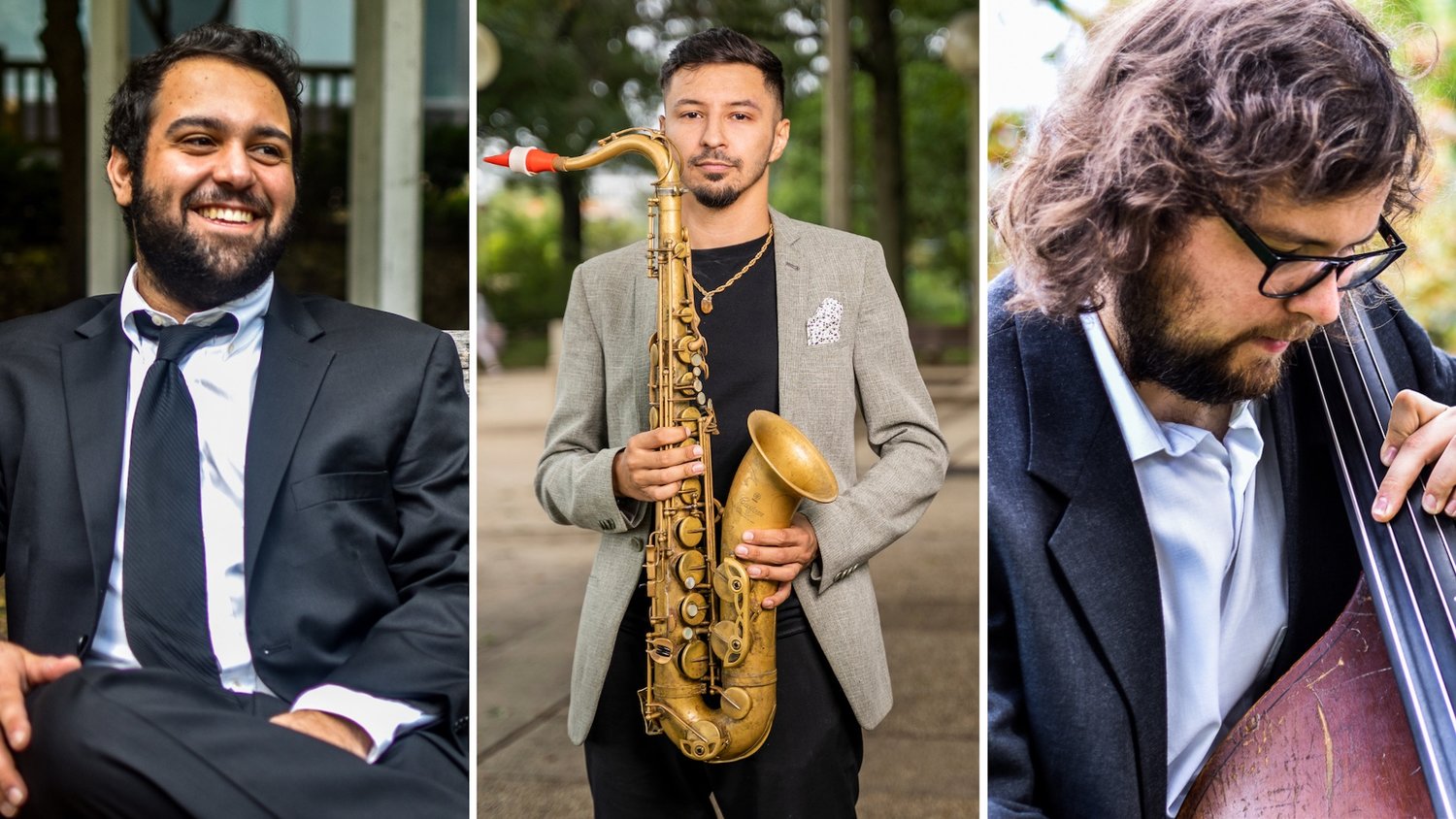 An die Musik, Cafe Mezzanotte and Jazz Beyond Borders are joining forces to host another jazz concert. Get ready for a thoroughly enjoyable evening of music featuring the Balbed/Arnold/Berkowitz Trio. The theme of their program is unity. View the concert online on Sunday, February 21, at 7:00pm.

The trio features international touring artist and saxophonist Elijah Jamal Balbed, bassist Stephen Arnold and drummer Julian Berkowitz. Armed with great tunes, great chops and the idealism of youth, they seek to encourage empathy and compassion, as we move forward together as a country and a planet. Familiar favorites and newly written compositions express diversity, invite unity and offer a taste of the music featured in their upcoming recording.

The unique instrumentation of this chord-less trio (without piano or guitar) offers a high degree of improvisation and experimentation, allowing the band to freely weave in and out of harmonies and rhythms. Enjoy creative arrangements of topical tunes, including classic standards and compelling originals.

Many music fans are especially fond of Brazilian music due to the role beloved musicians Charlie and Joe Byrd played in popularizing Brazilian jazz with their 1967 hit album “Jazz Samba.” In February, the month of Brazilian carnival, listeners will especially enjoy hearing bossa nova tunes by Antonio Carlos Jobim and Vinícius de Moraes.

The trio began performing “Chega de Saudade” (No More Blues) in weekly outdoor performances at Chi-Cha Lounge in Washington, D.C. last fall. Audiences there and in outdoor concerts at Malcolm X Park buoyed the trio’s popularity, and the tune became a favorite with their steadily growing audience.

You’ll hear two progressive jazz pieces by Balbed: “Keep Me from Fear” and “Song for Everything Wrong” from “The Karma Suite.” Featuring a catchy “Poinciana” groove, the latter piece portrays the times we live in, but its inspiring, hopeful tone points to better days ahead. Other highlights are Arnold’s “Waltz for Julian” and “To Wisdom, the Prize,” composed by the late Baltimore pianist Larry Willis.

Elijah Jamal Balbed is one of the District’s premiere jazz artists. Winner of the 2020 DC Jazz Prix Competition, he was named Best Tenor Saxophonist and Best New Jazz Musician by the Washington City Paper. He has since been featured by Capital Bop, Smithsonian Magazine and The Washington Post. An alumnus of the jazz studies program at Howard University, he has established himself as a top notch, versatile musician. Balbed performed with Chuck Brown, the “godfather of go-go,” from 2011 until Brown’s passing in 2012. Two years later, he founded The JoGo Project, a jazz/ Go-Go fusion band preserving the legacy of D.C.’s unique art form.

From 2013-2015, he performed regionally at The Kennedy Center, Strathmore, Bethesda Blues & Jazz and Bohemian Caverns. He has since toured internationally (Japan, the U.K.), Qatar and the Caribbean Islands, performing with such names as Lalah Hathaway, Eric Roberson, Jonathan Butler and Maysa. In 2018 and 2019, he went on cultural diplomacy tours in Russia on behalf of the U.S. State Department and U.S. Consulate in Yekaterinburg. He recently performed at PapJazz Festival in Port-au-Prince, Haiti.

Stephen Arnold is a bassist, composer and producer in Washington, D.C. Known for his open ears, earnest expression and unique musical voice, he is one of the region’s most in-demand upright and electric bassists. Hailing from Greenfield, Massachusetts, he studied jazz at George Washington University. Graduating in 2017, he dove headfirst into D.C.’s vibrant and diverse music scene, playing straight-ahead jazz, funk, Brazilian, rock and improvised music. In 2018 he was selected for Betty Carter’s Jazz Ahead program at the Kennedy Center.

Julian Berkowitz is a popular drummer, percussionist, and educator living in Washington, D.C. His music is rooted in American jazz, fusion, funk, and the rhythms of Brazil. Born and raised in Easton, Connecticut to a Brazilian mother and Jewish-American father, he enrolled at The George Washington University in 2013. There he studied with virtuoso Brazilian percussionist Alejandro Lucini whose mentorship played a crucial role in his development in straight-ahead and Brazilian/Latin jazz spheres. He graduated in 2017.

When health guidelines permit, the Café Mezzanotte series is presented live in Severna Park. The series has featured leading performing and recording artists from many countries since culture vultures Paulina Phillips and Theresa Sise from Jazz Beyond Borders began partnering with restaurant owner Kosmas “Tommie” Koukoulis in late 2019.

The restaurant’s Mediterranean cuisine and 100 seat-room are a perfect match for their diverse musical offerings performed by artists from Spain, Canada, United Kingdom, Russia and Brazil, as well as the U.S. After enjoying many sold-out concerts in early 2020, the series took a three-month hiatus from April through June, resuming in summer with outdoor concerts. It moved indoors in fall with social distancing, masks and seating at under 50% capacity. The presenters are currently offering online concerts, hoping to keep jazz fans in good health and waiting for state and county guidelines to stabilize.

Mark your calendars, purchase your tickets and join from the comfort of your home (a limited number of tickets will also be available for inside the theater at $25 each). Online concert admission is $10. Purchase tickets from www.andiemusiklive.com. To learn about future concerts and festivals, join the mailing list from www.jazzbeyondborders.com.