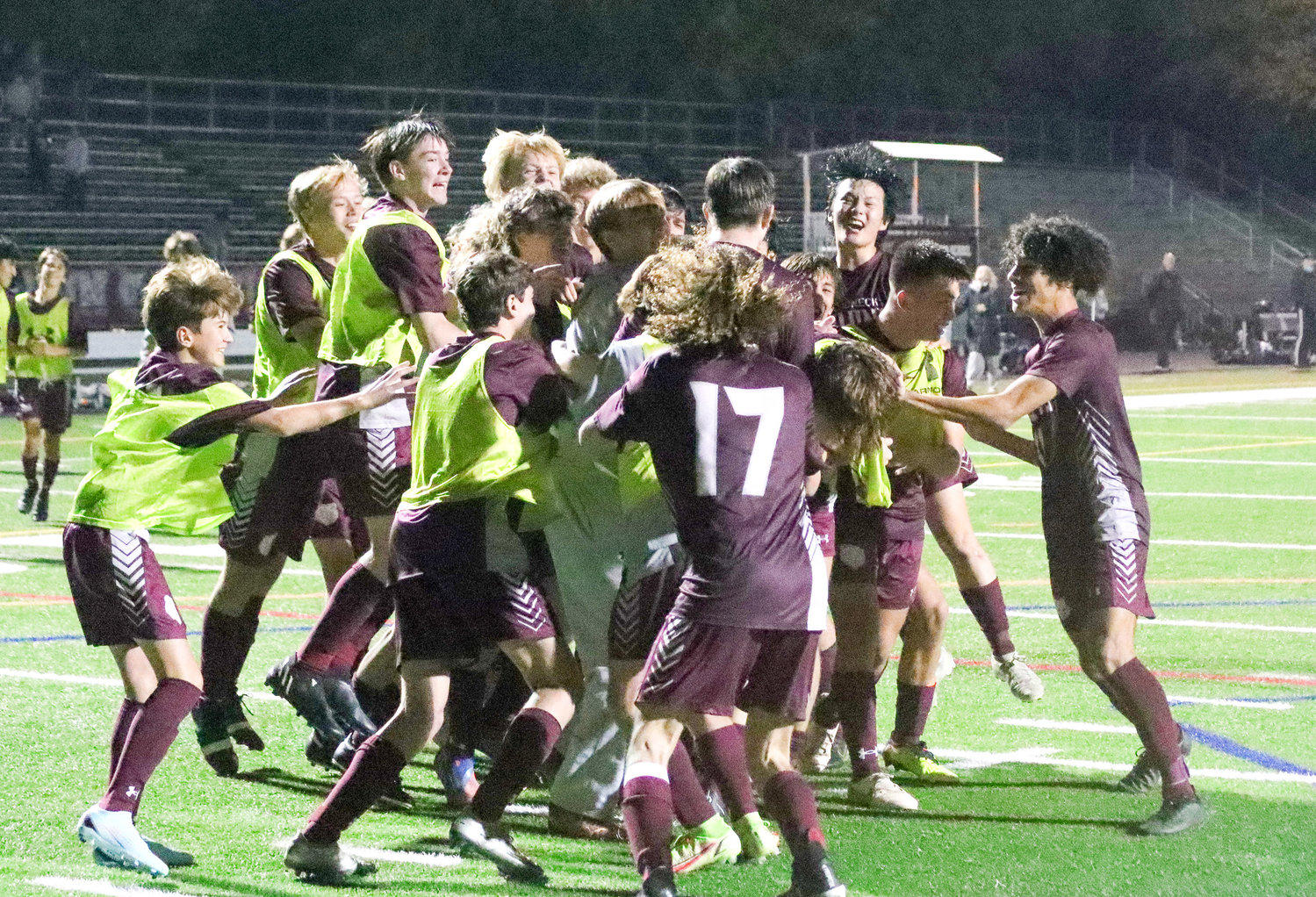 The Bruins celebrated after beating Annapolis 5-4 on October 26.
Photos by Dennis McGinley 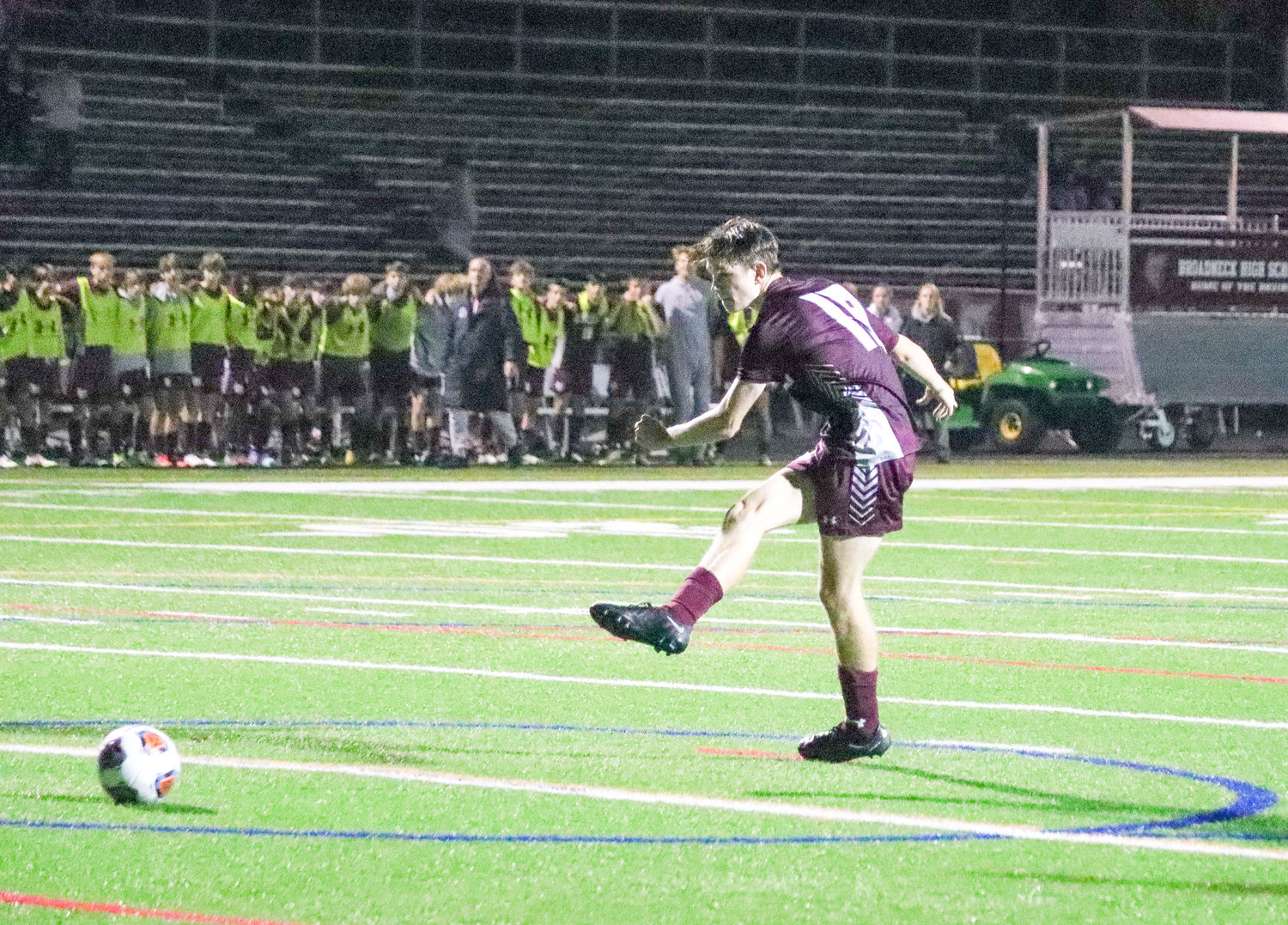 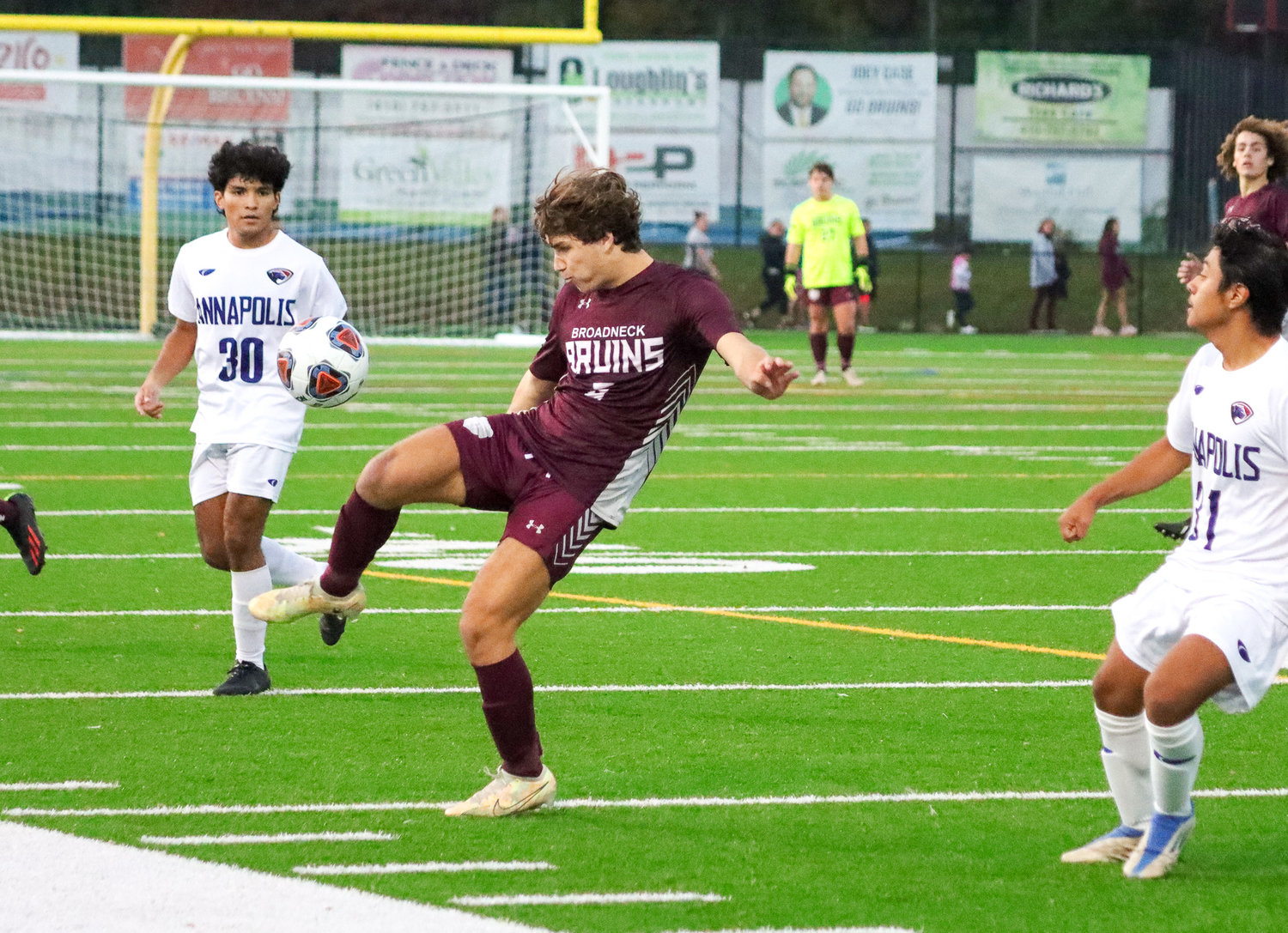 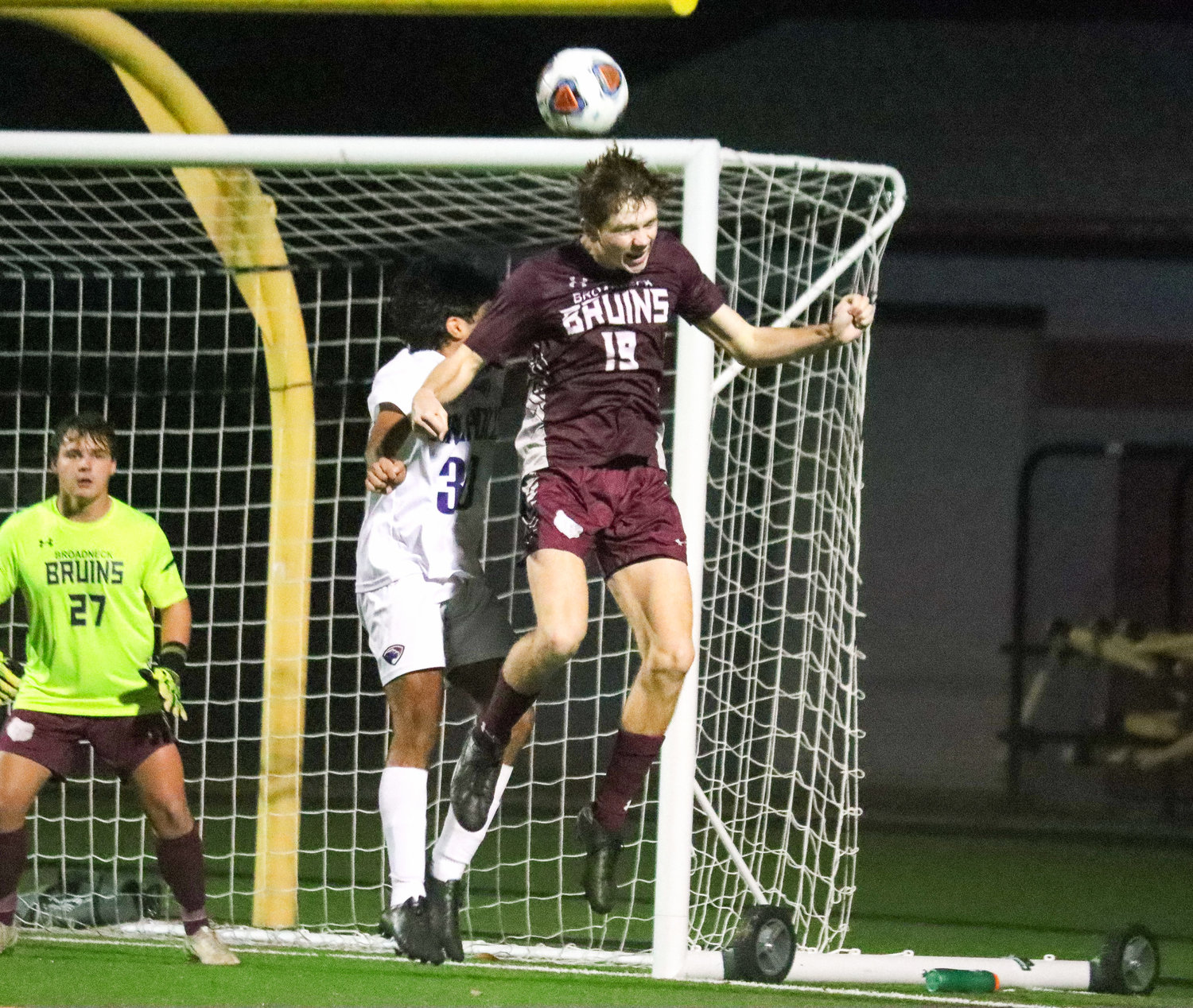 With a header, Riley Erbe kept the Panthers from a scoring opportunity.
Photos by Dennis McGinley 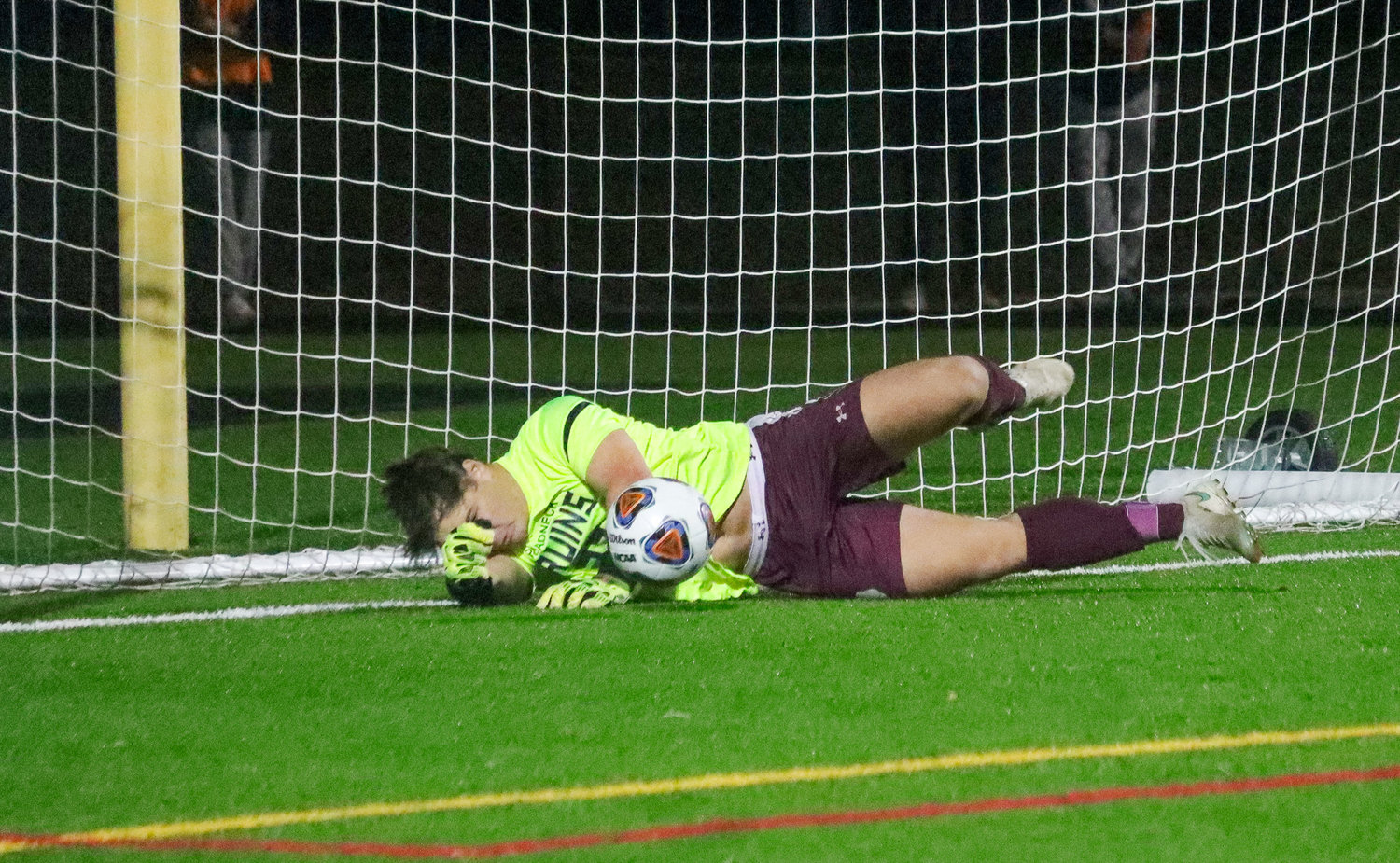 After 80 minutes of regulation and 20 minutes of overtime were not enough to settle their regional quarterfinal boys soccer playoff game on October 26, third-seeded Broadneck and sixth-seeded Annapolis went to penalty kicks. Thanks to a key stop by Broadneck goalie Matt Tettemer, the Bruins prevailed 5-4 in kicks after the two teams battled to a 2-2 tie. With the win, Broadneck has advanced to a regional semifinal matchup at second-seeded South River Friday night.

Tettemer (seven saves) kept the Bruins in the game with a few stops on point-blank chances by the Panthers. Not to be outdone, Annapolis goalie Olvin Martinez (five saves) made a nice save on a header to keep the Bruins off the scoreboard. As the end of the first half neared, it appeared the teams would go into halftime scoreless. However, on a last-minute corner kick, Annapolis' Noah Sotgiu found a loose ball in the box and tapped in the opening goal.

Broadneck came out in the second half with increased pressure and scored two quick goals in succession to take a 2-1 lead with 27 minutes remaining. Ethan Colon scored on a header off of his own rebound after Martinez saved the first attempt to tie the game. Less than a minute later, Harlan Welsh tapped in the go-ahead goal off a feed from Sam Myers. Just when it seemed Broadneck had taken control of the game, Annapolis increased pressure of its own, and with 18 minutes left in regulation, Dash Buckley headed in a corner kick to tie the game at 2-2. The teams continued to battle through the remainder of regulation and two overtime periods with neither team generating many scoring chances. In penalty kicks, Broadneck's Zach Madairy, Jayden Smith, Tanner Boone, Sam Petz, and Harlan Welsh all scored.

“I knew it would be a tough game,” he said. “We just played a one-goal game with Annapolis last week and it's so hard to come back and play somebody so closely together.

“I thought we showed some really good composure to tie and then take the lead.”