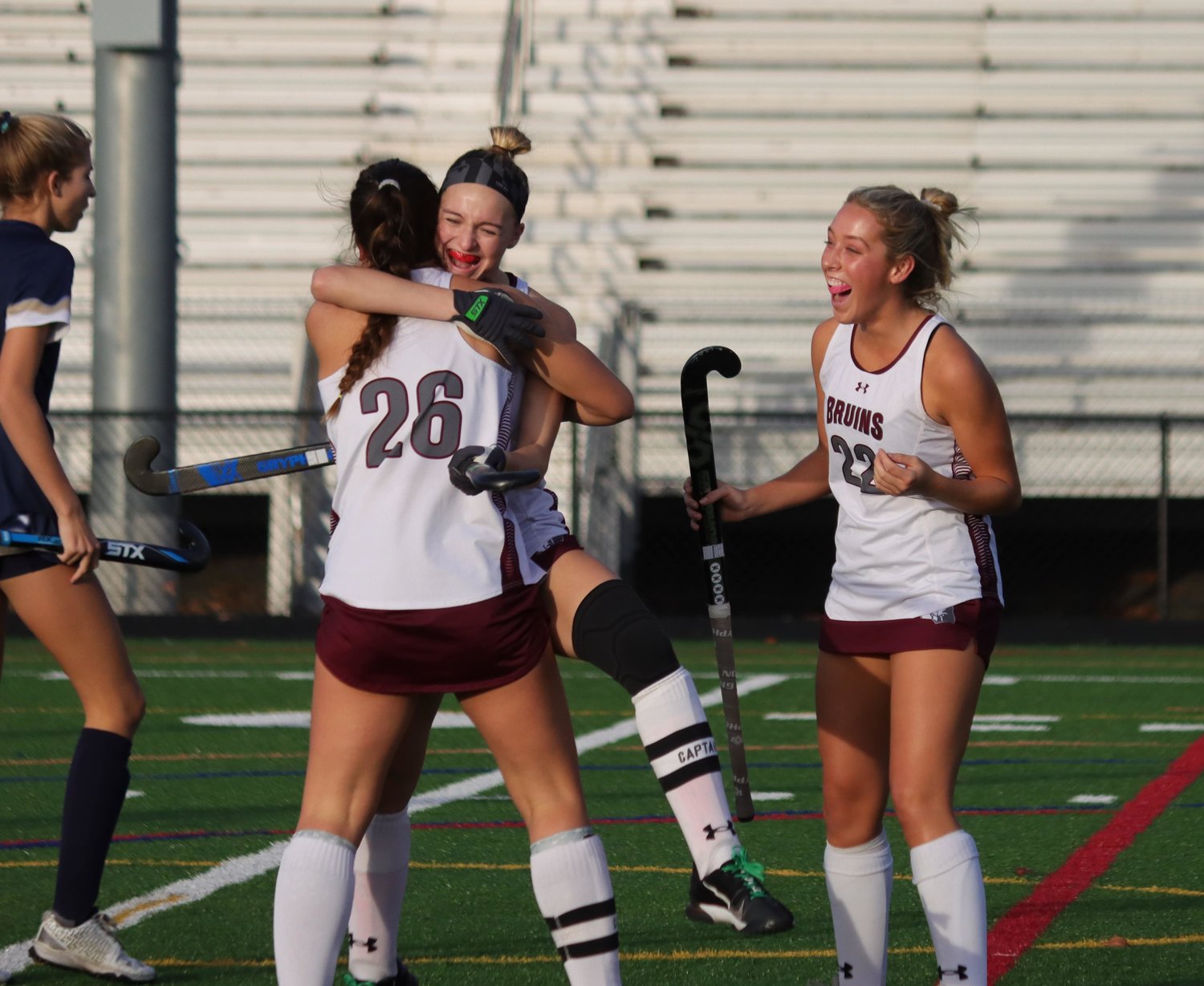 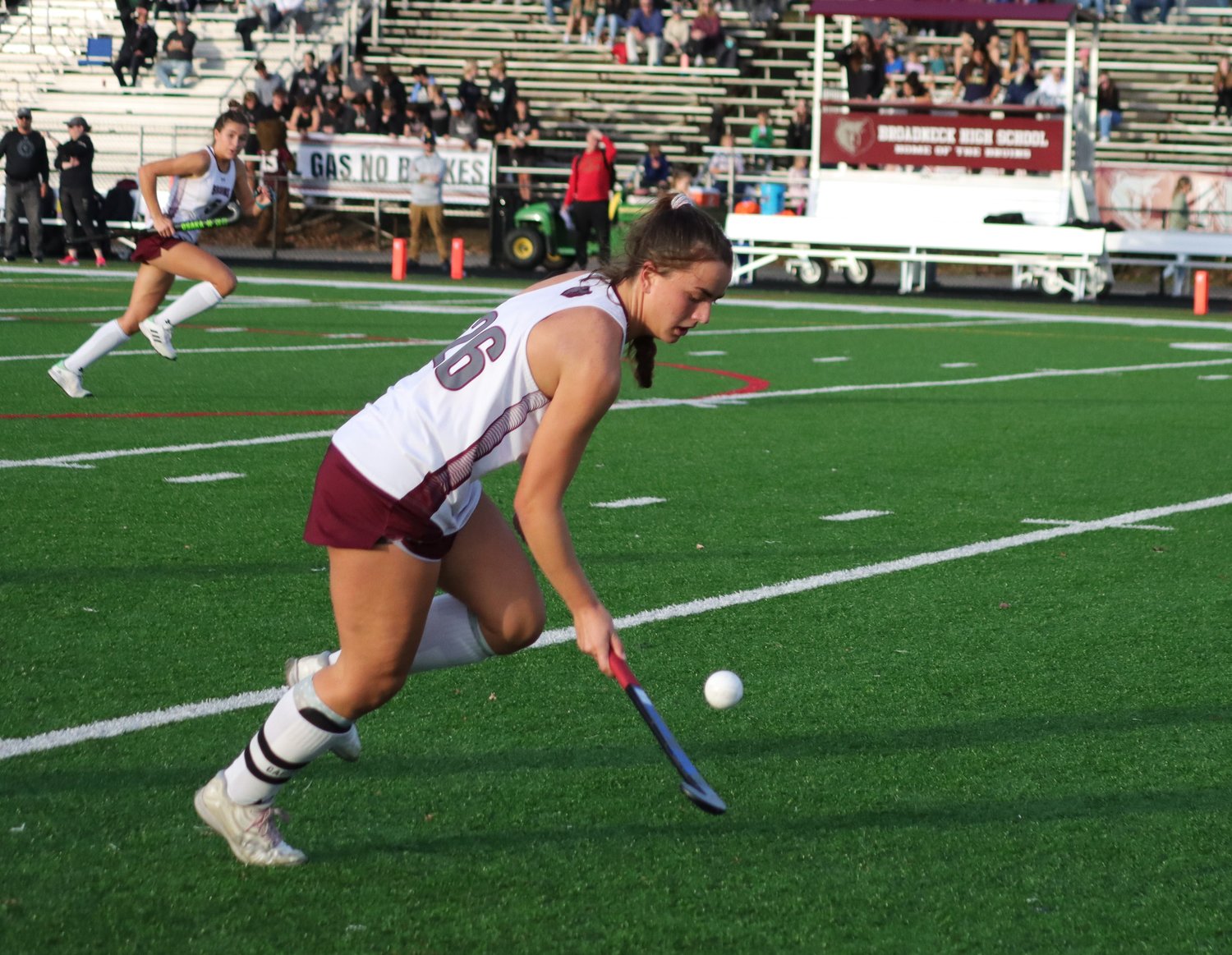 Arden Hunteman scored one goal and assisted on another to help the Bruins beat the Falcons 3-1 on November 4.
Photos by Dennis McGinley 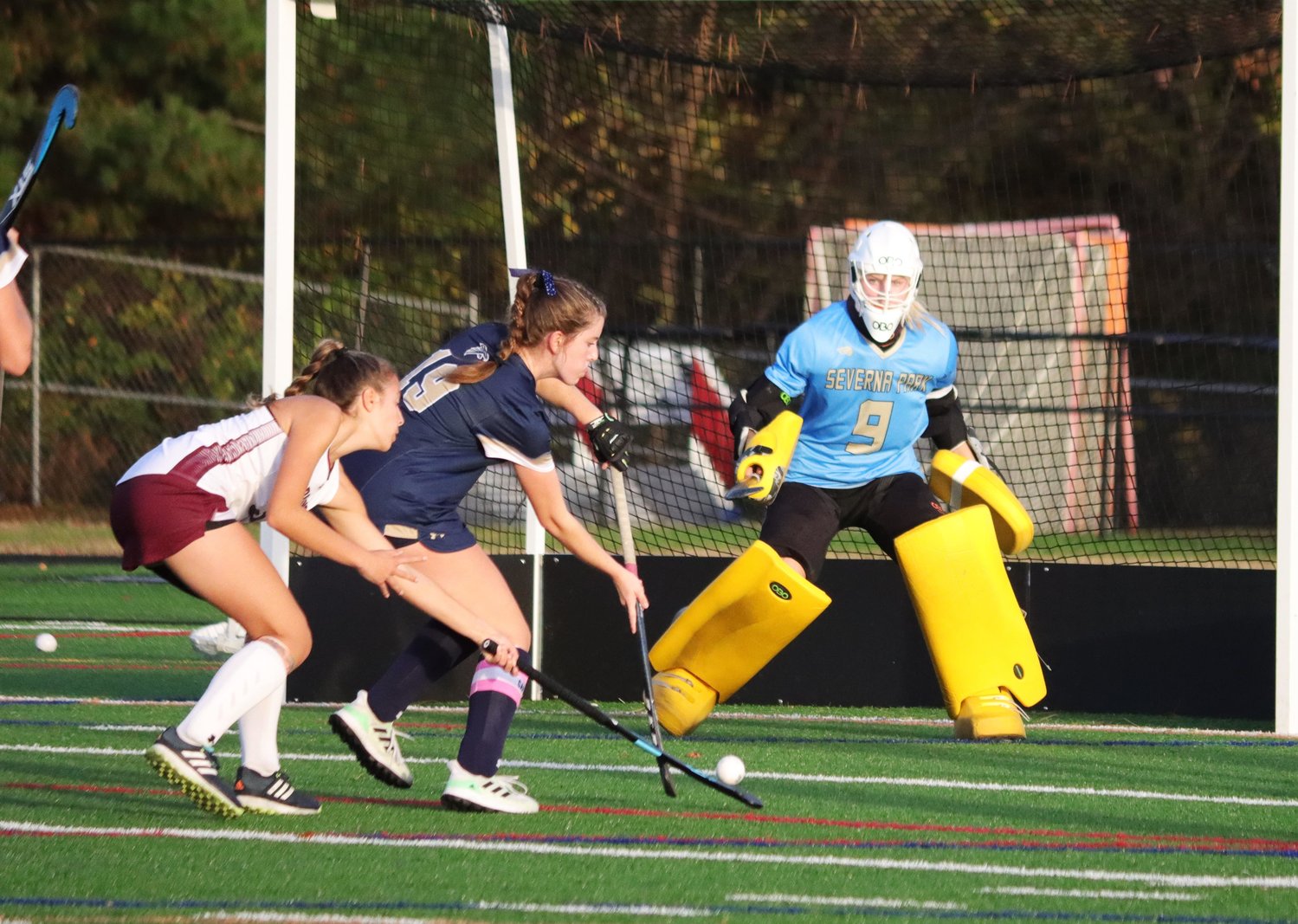 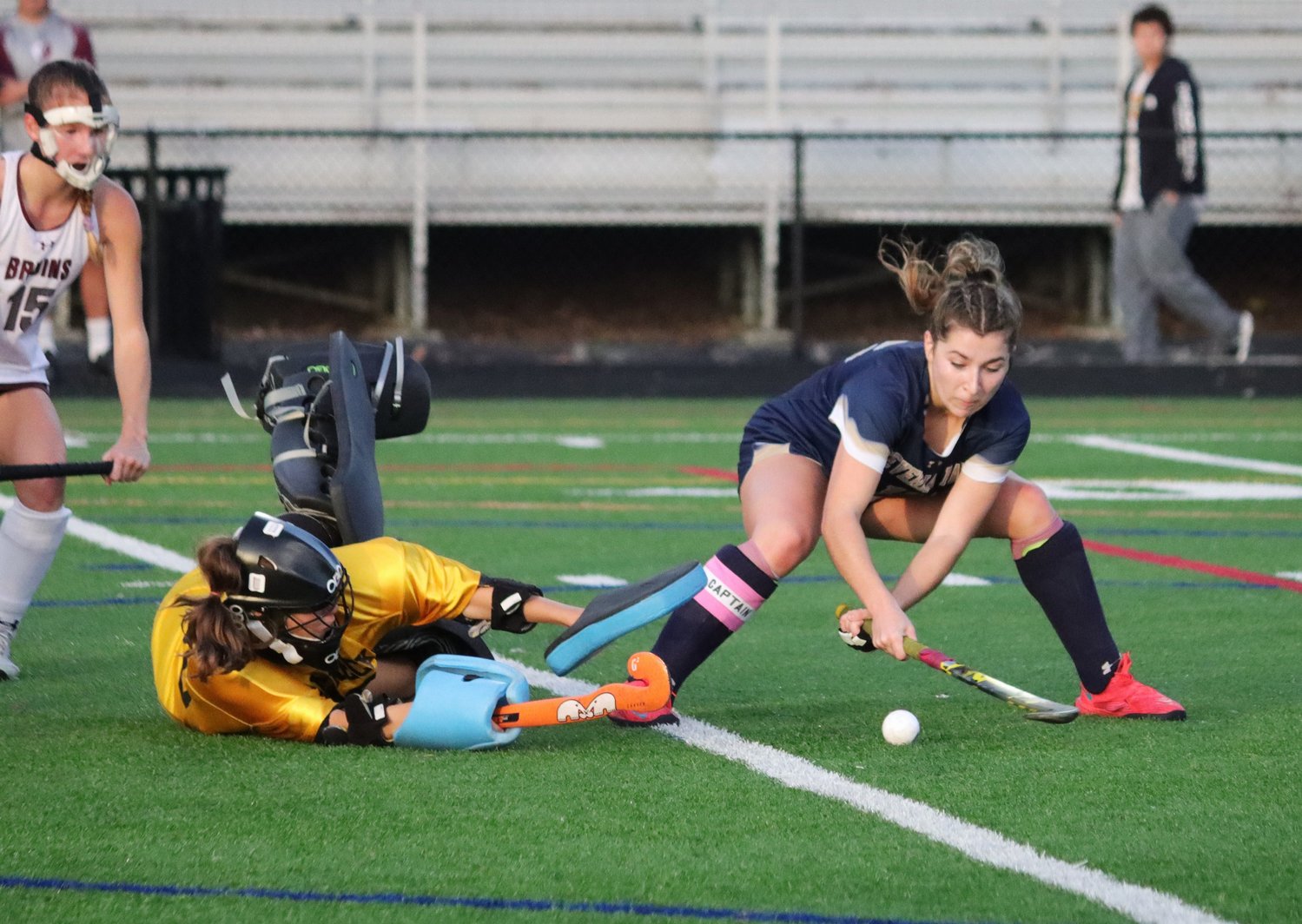 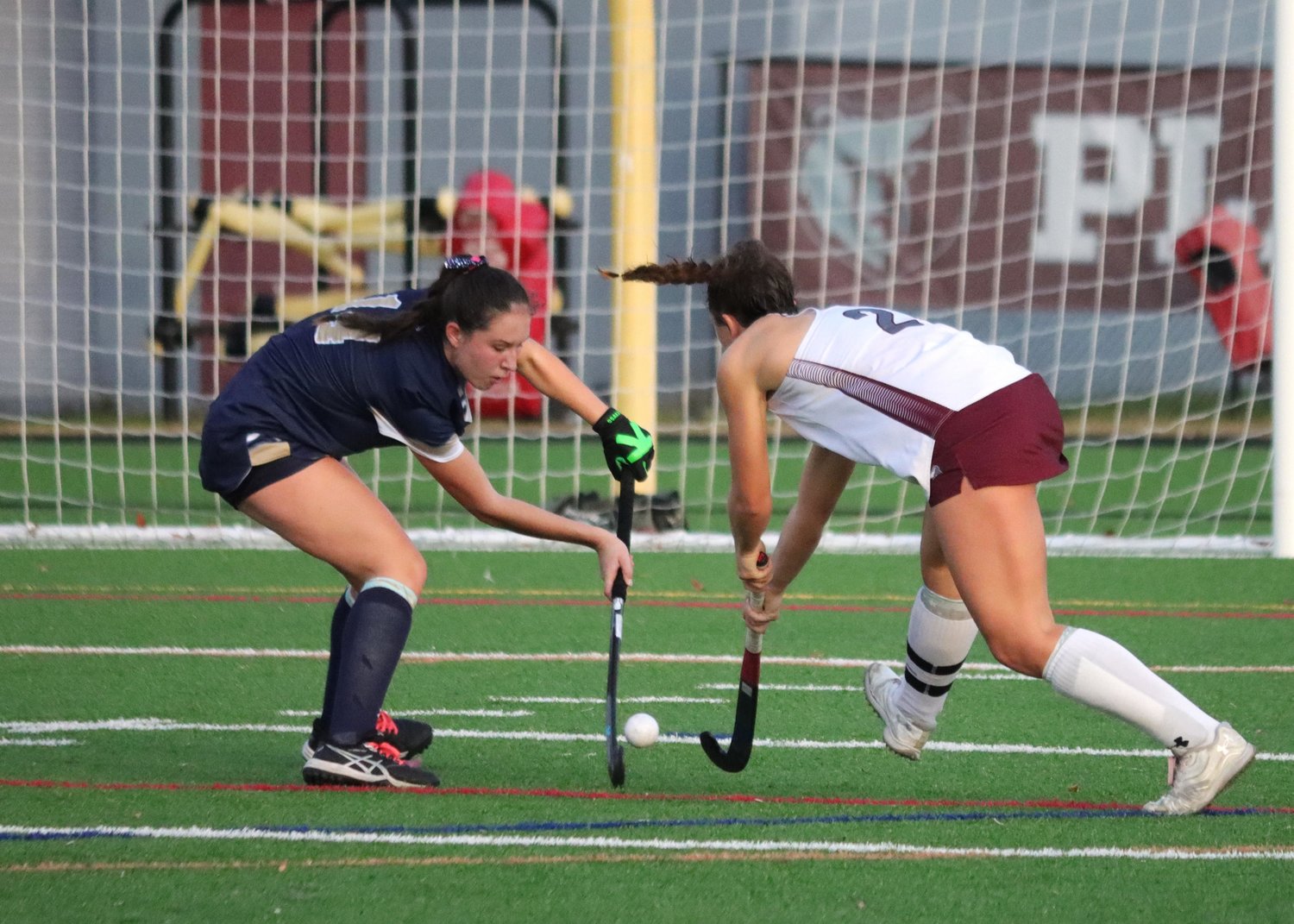 Emma Weber (left) and Maya Everett fought for control of the ball.
Photos by Dennis McGinley 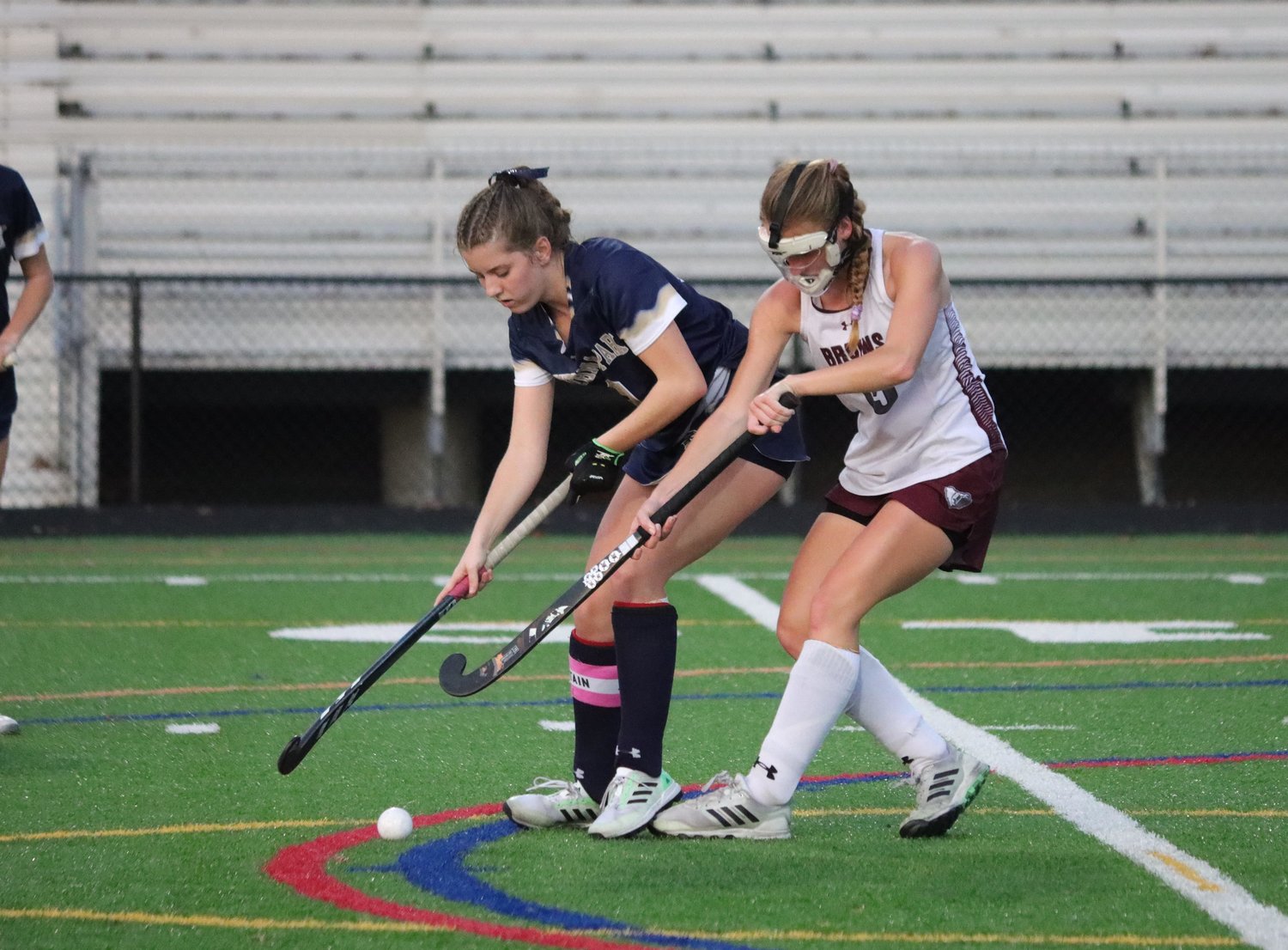 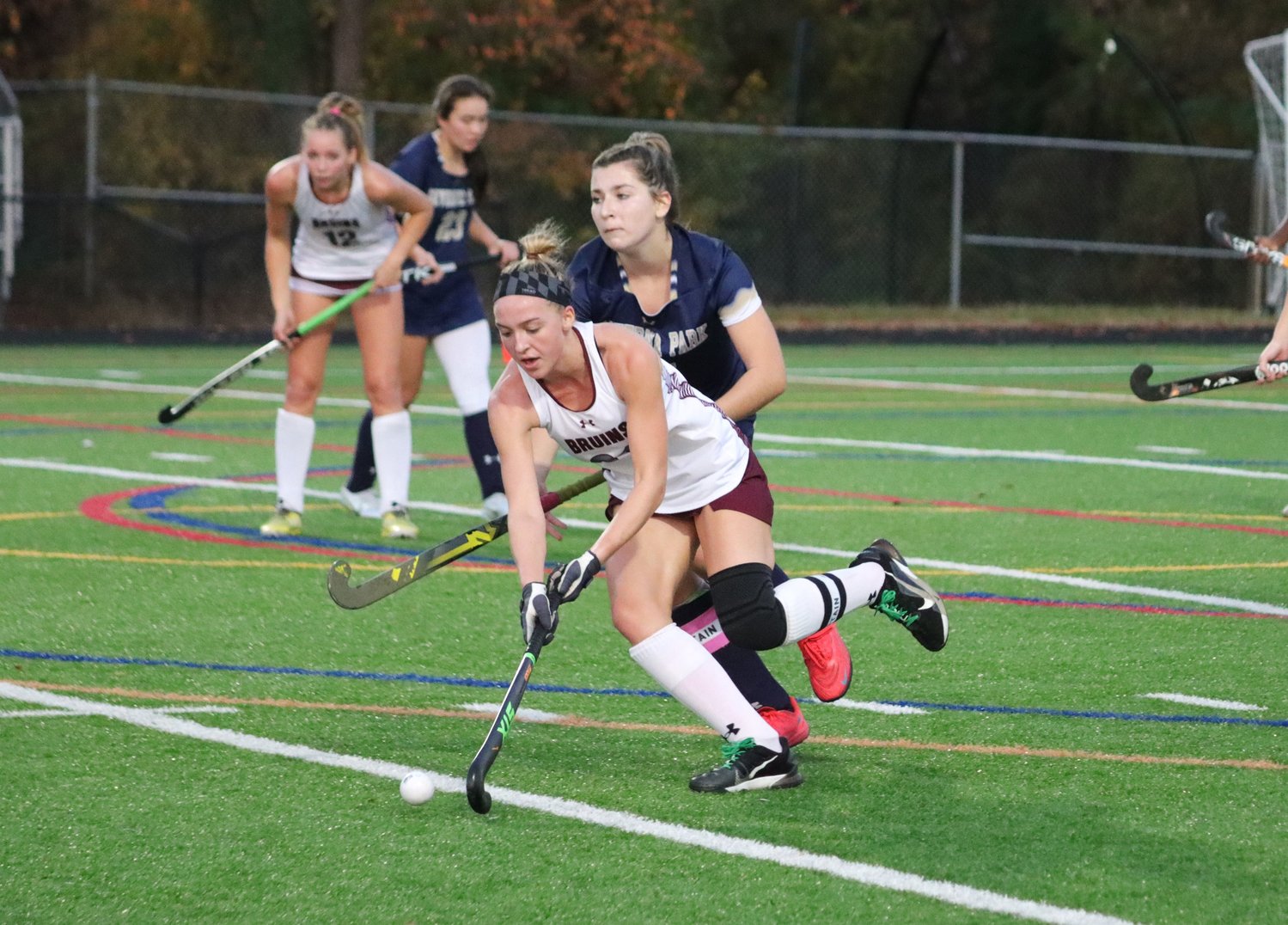 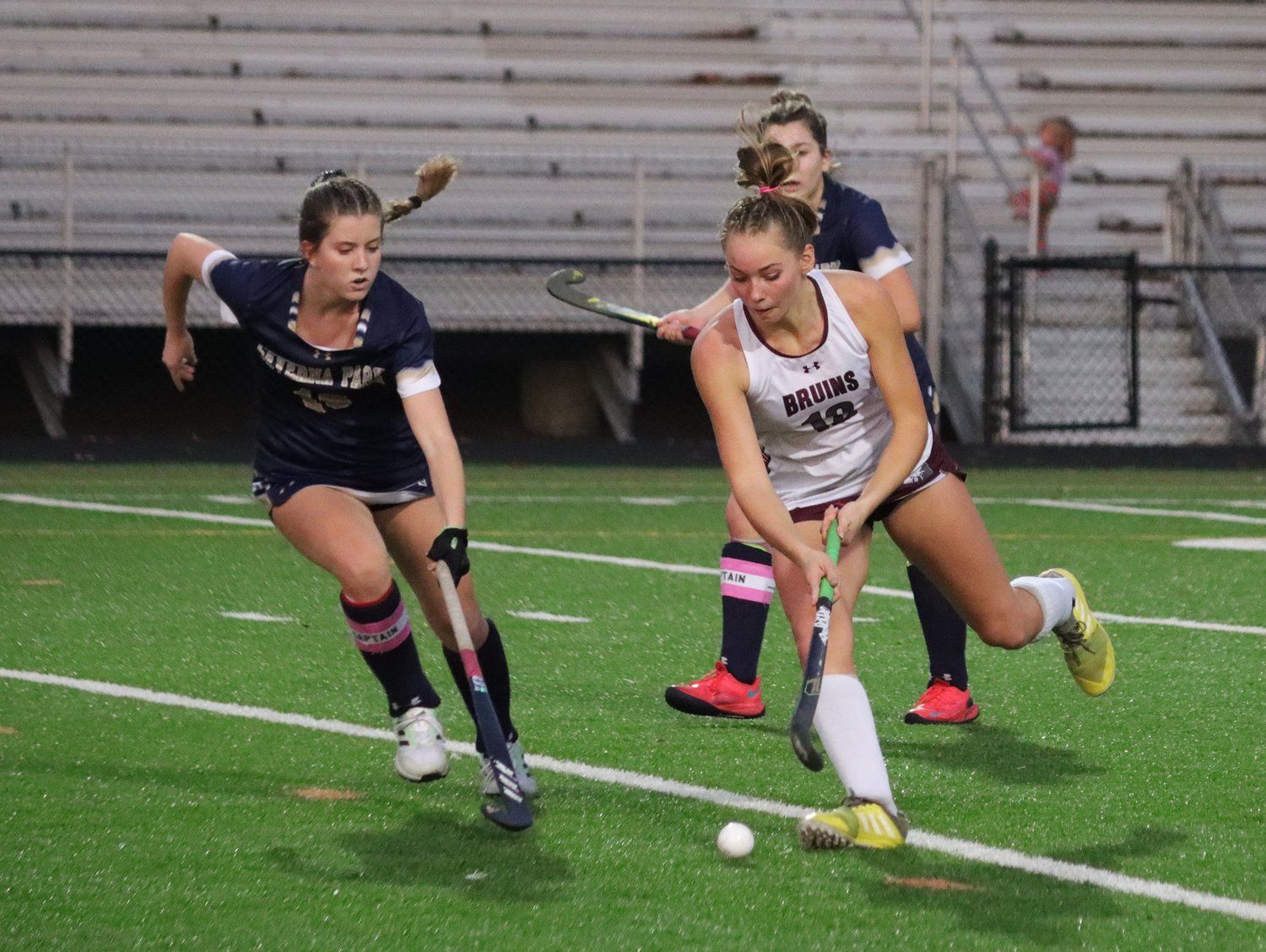 This celebration couldn't wait for the parking lot or a fast-food restaurant.

So, the Broadneck High School field hockey players raced out to congratulate goalie Mia Moody after Broadneck beat visiting Severna Park in the Class 4A playoff quarterfinal, 3-1, on November 4.

The loss to defending state champion Severna Park last year in a quarterfinal was etched in the minds of the Broadneck players.

“To lose off a stroke last year and miss out on our chances (for a championship), that’s all we were thinking about,” Broadneck senior forward Arden Hunteman said. “After that loss last year, we were (immediately) talking about this year — seeing them. It was a full-circle moment.”

Broadneck moves on to play Walt Whitman in the state semifinals on November 9 at Paint Branch High School in Montgomery County. The Bruins are seeking their first state title since 2002, and Broadneck assistant coach Melissa Quigley was a member of that team.

“There’s no doubt in my mind that team is going to win the state championship,” said Severna Park coach Shannon Garden, whose team finished 11-7. “They are a great team. An undefeated team.”

Broadneck’s intensity showed up in the opening minutes as the Bruins jumped out to a 2-0 lead.

From the right side of the 16-yard circle, Hunteman drilled a shot to the left corner, past goalie Charlotte Kramer, who finished with 16 saves, to give Broadneck a 1-0 lead with 13:51 remaining. It was Hunteman’s 18th goal of the season.

Then, Hunteman assisted on the second goal nearly two minutes later. Hunteman found senior Jess Kopernick near the left post and the midfielder knocked into the far corner.

“If a team were to do that to us,” Hunteman said of the quick lead, “we would have the same reaction. It would break us. When you score early, it sets the tone for the rest of the game.”

Broadneck, which outshot the Falcons 10-3 in the first half, added an insurance goal with 13:22 left in the second period to make it 3-0 – the halftime score. Sophomore Faith Everett scored an unassisted goal, intercepting a pass and drilling the ball into the goal.

Moody did her part to preserve the lead. She stopped a point-blank shot from Sydney Day about two minutes after the Broadneck goal.

On another point-blank shot, and with Moody on the ground, she rejected Ava Drexler-Amey’s attempt.

“They had chances, and if they have gotten a goal there, it might have swung the momentum in their direction,” Broadneck coach Shannon Hanratty said. “Mia really made some big one-on-one saves. Mia being patient and composed under that pressure kept the momentum on our side.”

In the second half, Severna Park stepped up its play offensively. In the first six minutes, the Falcons racked up four penalty corners and four shots. But they couldn’t find the back of the goal.

Severna Park finally broke through when Drexler-Amey tipped Meredith Schepens’ shot into the cage with 6:21 to go in the final period.

The Falcons had eight shots on goal in the second half.

“We actually won the second half,” Garden said. “We had a lot of opportunities, but we just couldn’t score.”