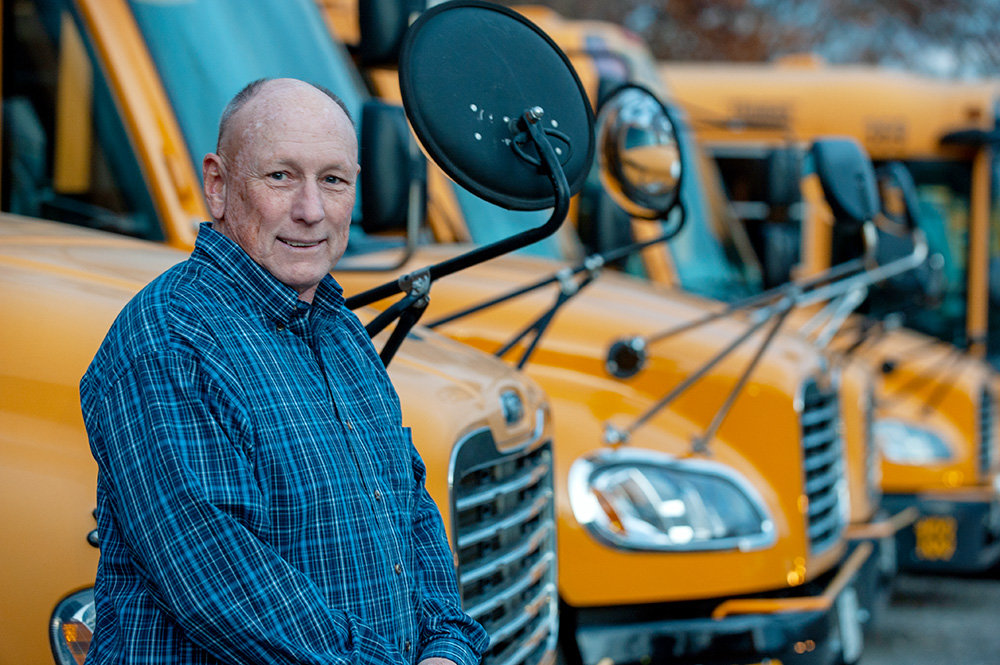 Each morning, parents wake up and wonder if they will get a text or email notifying them about a bus delay. Wondering if their children will be stranded on a sidewalk.

“While the reasons are many, the facts remain that our shortages represent 9 percent of our driver workforce, about 60 bus drivers, which is in line with the 10 to 15 percent shortage that has been widely reported in the press nationally within the news,” said AACPS Chief Operating Officer Alex Szachnowicz.

Often bearing the brunt of parents’ frustration are the current bus drivers who have not quit and who have covered extra routes and accepted unwanted shifts because they want to help kids get to school.

One of those drivers is Bill Lippincott from Severna Park. A driver for Fay’s Bus Service in Pasadena, he drove students to field trips and sports games prior to the pandemic. Now he’s working full-time, shuttling kids to Chesapeake High School, Chesapeake Middle School, Fort Smallwood Elementary and even as far as Reisterstown because some special needs students from Anne Arundel County attend schools outside the area.

“I’ve been with Fay’s close to 20 years,” Lippincott said. “We were three drivers short and they asked if I could do more.”

He said yes, without hesitation. But now the company is seven drivers short.

Fay’s is just one of several bus contractors used by AACPS. Lippincott estimated that 75 percent of the bus drivers who work for Fay’s are retired.

“Some of [the drivers] are retired and only want to do trips here and there, and they’re working 40 hours a week,” said Robin Pskowski, an owner of Fay’s Bus Service. “It’s been difficult.”

Lippincott has about 10 high school stops, 20 for middle school, and four to five elementary school stops. He does it to benefit the kids, he said, although he does not see an immediate resolution in sight. Many drivers feel that way despite recent actions by county government.

On November 4, County Executive Steuart Pittman and the Anne Arundel Workforce Development Corporation (AAWDC) announced they would use American Rescue Plan funds to give school bus drivers $5,000 retention or new hire bonuses, while aides would receive $2,000 retention or new hire bonuses. They called the bonuses “an immediate solution to challenges faced by school bus contractors in recruiting and retaining staff.”

“We can’t continue leaving kids stranded and parents’ work schedules disrupted due to a national shortage of school bus drivers,” Pittman said in a statement. “Dedicating $4.2 million of our county’s federal recovery funds to these bonuses is the right thing to do for parents and their kids.”

Maryland School Bus Contractor Association representative Erin Appel said, “This is the quickest and most efficient way to help our bus drivers and get our kids to school.”

That may have been welcome news for parents, but the problem is not resolved. Drivers must have a CDL (commercial driver’s license) and go through AACPS training to work for a contractor.

“Even if there was an influx of people who wanted to drive, it’s not something they can do overnight, getting a CDL and going through the county’s training,” said Lippincott, who got his CDL when he was a Montgomery County firefighter. “For somebody who has never driven a large vehicle, that can be intimidating and take a while to get used to.”

Many people also have misconceptions about the job.

“I ran into someone who was retired the other day and said, ‘We can get you a CDL,’” Pskowski said. “He looked at me like I had two heads before he would think about driving a bus. It’s amazing the impression people have about driving a bus. It’s not what people think. I think you see movies where kids are screaming, jumping, crawling, everything else. It’s really not like that, but I think that’s people’s impression.”

Many bus drivers quit during the pandemic. While Lippincott misses his old schedule, he does not want to give up on the kids who are depending on him and other bus drivers.

“I’ve had my shots. I’m in good health,” he said. “Some of us have had to step up our game and do things we wouldn’t normally do, and I’m OK with that.”