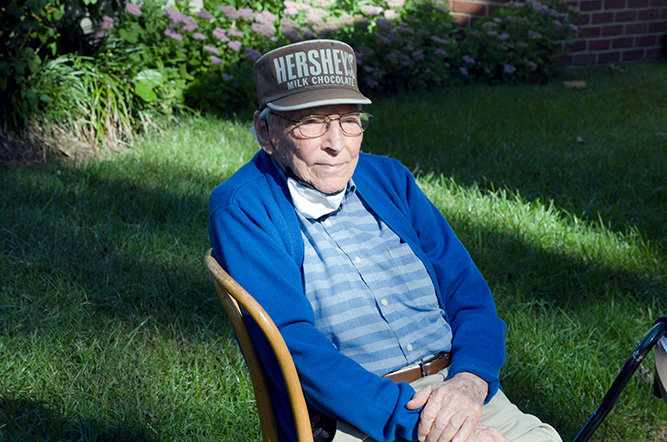 Ken Brady, whose birthday is October 9, regularly wears a Hershey’s hat as a tribute to the famous chocolatier who gave many boys a home.
Photo by Zach Sparks 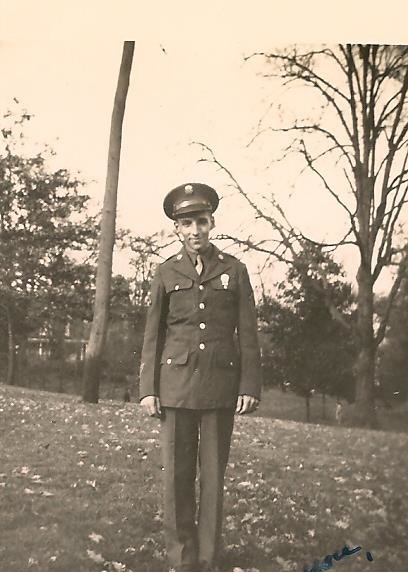 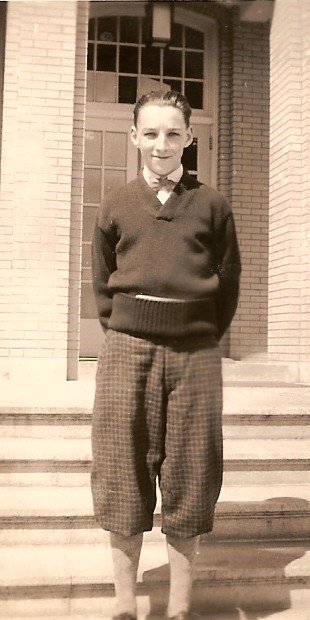 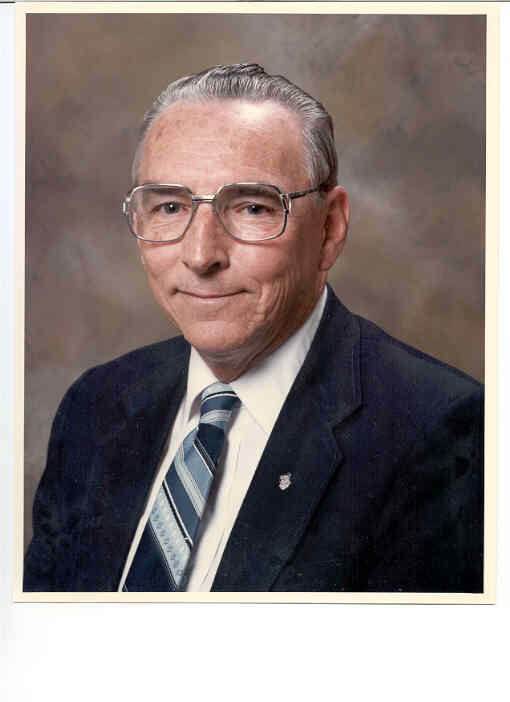 After 33 years with Westinghouse, Ken Brady retired in 1985.
Photos Provided 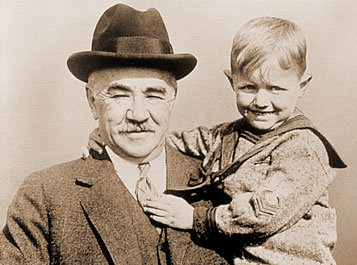 Ken Brady’s childhood was marked by tragedy, but he credits a series of lucky breaks for helping him live a meaningful life and reach his 100th birthday on October 9.

After his father died from cancer at age 37 in 1929, his mom was left with six young children. Unable to care for them all, she placed Brady and two of his brothers in the Hershey Industrial School, founded by Milton Hershey and his wife, Catherine, who were unable to have children of their own. Even though Catherine died in 1915, Hershey continued to expand the school and take in more orphan boys.

Brady estimates that the school cared for about 300 boys at the time, and Brady and his brothers were placed in different homes.

“He called us boys his children,” Brady said. “He would sit down sometimes and have dinner with us. Also, he would come unannounced to check on us and would come alone; he wasn’t trying to put on a show. He was concerned about our well-being.”

Brady lived at the institute for 11 years, graduating from high school in 1940. He spent three years in the military after being drafted in 1943, two years after the attack on Pearl Harbor during World War II. Roughly a year after joining the military, Brady married his girlfriend, Jeanne.

“When I got to the church, it was filled with people. I thought my wife must have had a large family,” he said. “It was D-Day, and people were praying for a successful invasion.”

Brady was thankful to not be involved in the invasion — one of the few “lifesaving events” to which he attributes his longevity.

“When I was drafted, most young men were being trained as foot soldiers for the invasion,” he said. “The casualties were going to be high, and I was hoping I would not be in the Army infantry.”

Instead, he was assigned to the Air Corps, which posed another possible outcome.

“Many bombers were being sent overseas,” he said. “There were 10 members on each bomber, and many of them were getting shot down.”

“I wasn’t shot down and I wasn’t involved in the invasion,” he said. “I was very fortunate.”

An estimated 2,501 Americans died on the opening day of the Normandy Invasion. Of the 92 people in Brady’s high school class, 15 were killed in World War II, he said. Eight decades later, he still reflects on a train ride that occurred after he was drafted.

After his service, he got a job manufacturing war planes, developed an interest in electronics and then spent six weeks in Douglas, California, teaching a group about a radar system that was being installed in Navy planes.

Brady was hired by Westinghouse Electric Corporation. BWI opened a plant to manufacture torpedoes for Navy submarines, and his manager asked him to join him in transferring. Brady was promoted to torpedo program quality manager.

“Now I was managing a product, not people,” he said.

Brady had three managers during his time at Westinghouse, and he said all three gave him great opportunities. One perk, a trip aboard a submarine, came while he was doing PR for Westinghouse.

“At 5:00am, it took off and it stayed on the surface, and at some point, it dove,” he said. “I got to watch Westinghouse torpedoes being test-fired. I don’t remember anyone else at Westinghouse getting that privilege.”

Later he was promoted to the company’s inspection division, allowing him to travel the U.S. wherever he desired so long as he produced his airline tickets. He ended his professional career in 1985 after helping to plan conferences in Detroit and Baltimore.

Brady was a Westinghouse employee for 33 years, and the company celebrated his career by throwing a party at La Fontaine Bleue in Glen Burnie.

“I had a very successful career at Westinghouse. Looking back, I’d say it’s based on what Mr. Hershey told me,” Brady said, noting that Hershey required boys to work on a farm. “Each boy had three cows and the cows were our responsibility. This taught us to be reliable and to be responsible for our actions.”

Brady lives in Severna Park, the same town as his son, Keith, and daughter, Michele. His wife, Jeanne, died in 2016 after 72 years of marriage.

“Her good cooking must have been nutritious for me to live this long,” Brady said. “She was so nice to me, and we took many good vacations.”

He also attributed his longevity to having a good primary care doctor.

In 1985, he purchased as many Hershey’s hats as he could. Even though the Hershey Industrial School was converted into a college prep boarding school in the 1990s, about 76 years after Hershey’s death, Brady does not want Hershey’s philanthropic legacy to be forgotten. He wants to pay homage to the man who gave him and many other boys a home.

“It’s amazing how many strangers say, ‘I like that hat,’” Brady said. “It gives me a foot in the door to tell them about Mr. Hershey. I want people to know what a good man he was.”