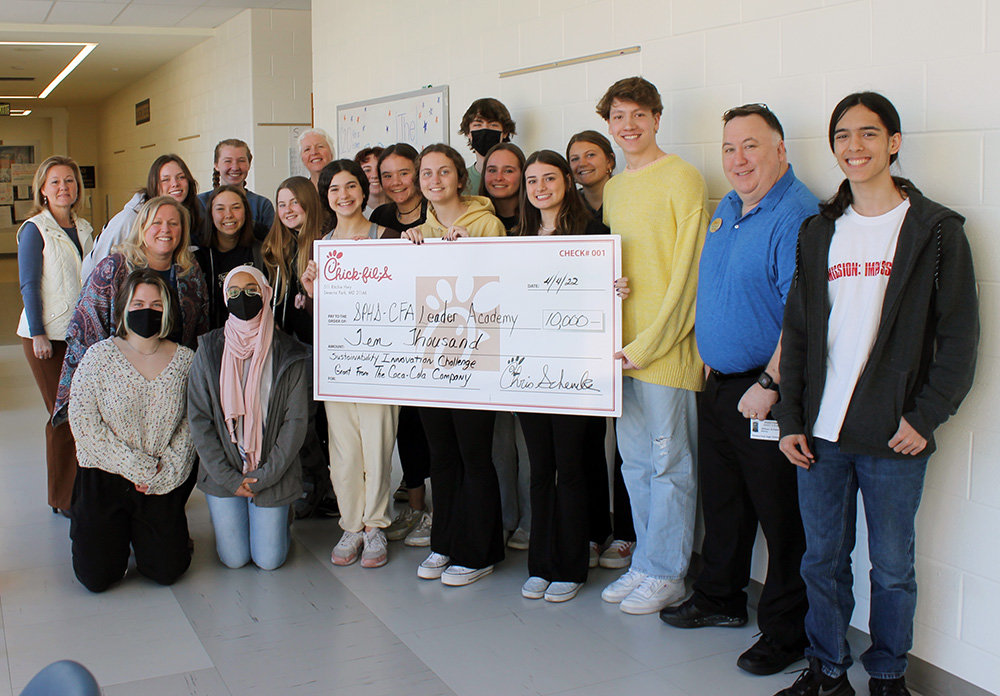 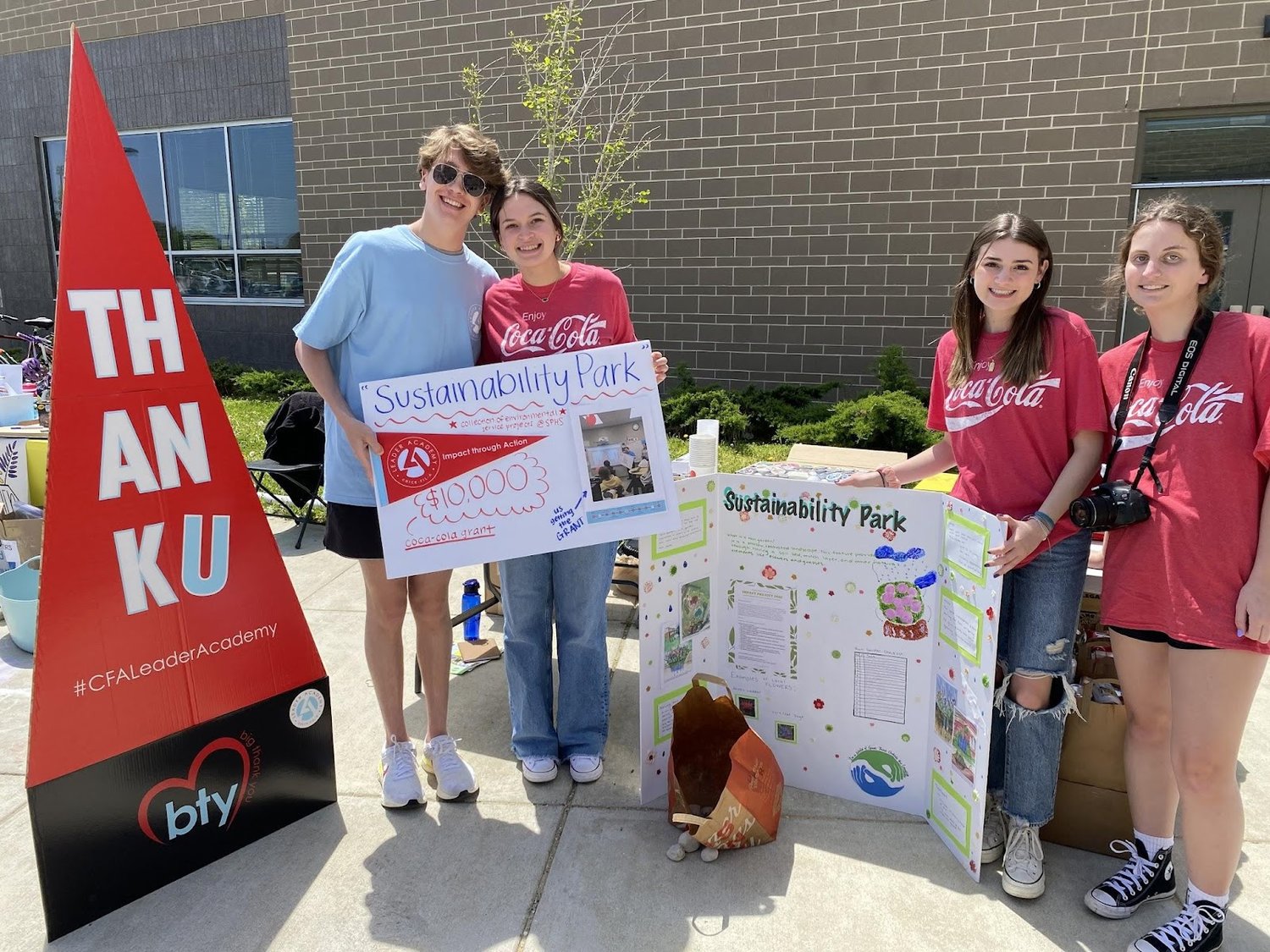 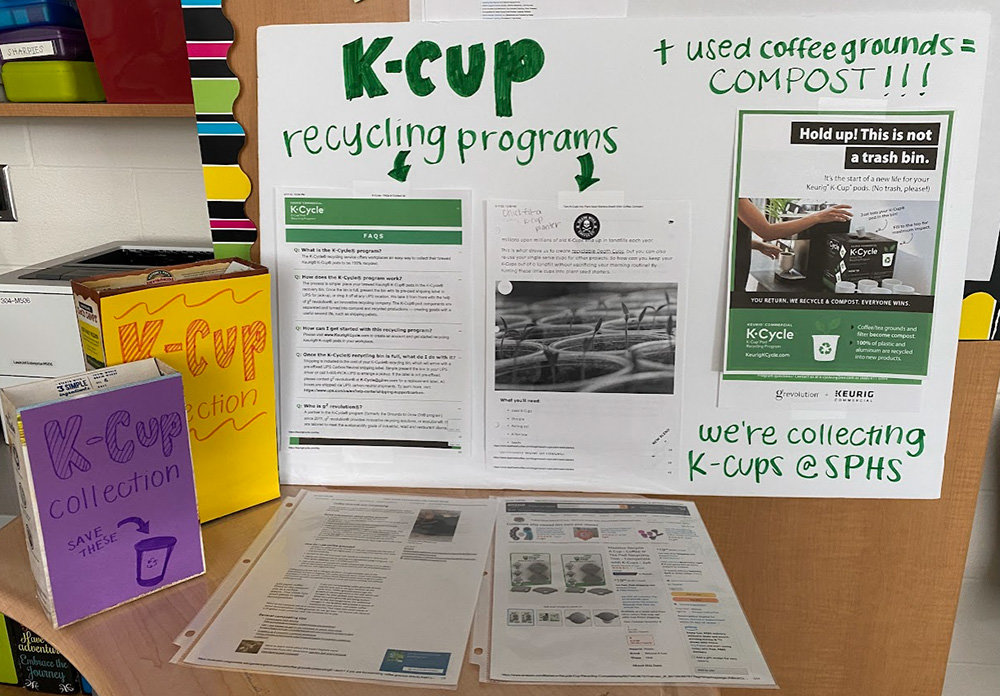 Students are collecting K-Cups at school and throughout the community.
Previous Next
Posted Wednesday, June 8, 2022 3:34 pm
By Zach Sparks l zach@severnaparkvoice.com

A world without waste — that’s the goal of Severna Park High School students who just got a boost from the Coca-Cola Company and Chick-fil-A in the form of $10,750 in grants.

The school has a Chick-fil-A Leader Academy, a national program and 30-member extracurricular club. Theirs is sponsored by the Severna Park restaurant and owner Chris Schenck, and it’s supported by the school’s Business, Innovation and Leadership Signature program.

Severna Park’s Chick-fil-A Leadership Academy created a capstone Make Impact project that won $750 from Chick-fil-A, which then encouraged the students to compete in Coca-Cola Company’s Sustainability Innovation Challenge. Severna Park was one of two schools nationwide to win the challenge and $10,000 for their project.

“Every December, the Chick-fil-A Leadership Academy students do a Do Good December project, which changes every December based on what the students want to do, and then they do their Make Impact project in the spring,” said Heather Barnstead, Signature lead teacher. “It’s built up throughout the year.”

Past projects have included a party for the school’s unified bocce team and housewarming kits for the residents of the Light House homeless prevention support center in Annapolis. For Do Good December in past years, students made 40 personalized bags for youth at a teen orphanage, supported Afghan relief, and held book and clothing drives.

This year, their Make Impact project will involve using K-Cups as fertilizer, creating a community makerspace with recycled materials, expanding the school’s butterfly garden and more. But before the finished product, the project was a seed of a concept. Students started by sharing ideas using Google Docs and researching the cost for items they wanted to purchase.

After club member Aidan Darling wrote the first application to the Chick-fil-A Foundation, students promoted and attended a cleanup day organized by the Magothy River Association on March 6. They were joined by their peers from Broadneck High School.

“Once we were told about the Chick-fil-A Foundation grant of $750, we began to make plans, only to have one of the Chick-fil-A Leader Academy representatives encourage us to go a step farther and apply for the Coca-Cola sustainability grant for $10,000,” Barnstead said. “So Aidan and the crew got to work and scaled up the original plan, and Amanda von Diezelski and Isabella Barr created a video about the project.”

“I think it’s good for them to do the grant writing,” Barnstead said. “The whole idea of planning a budget, that goes with the financial literacy piece of it and to understand that it takes money to do things and then to actually make a plan because flying by the seat of your pants doesn’t work when you’re trying to get things done, and in a small amount of time.”

In April, students were called to a club meeting, joined by several Zoom participants including guests from the Coca-Cola Company, Chick-fil-A and ADDO Worldwide, which makes the Leadership Academy curriculum. Lori Fowler, manager of service learning and mentorships for Anne Arundel County Public Schools, also attended. The guests asked students about the plan and how they were going to proceed.

Then Schenck and Chick-fil-A Severna Park marketing director Teresa Bennett walked in, along with the school’s Signature facilitator, JoAnne Brack, to present a large check for $10,000.

“The students were shocked, thrilled and at a loss for words!” Barnstead said.

The moment was just as exciting for Schenck and Bennett.

“It’s very important to us to go out in our community and give back,” Bennett said. “That’s who we are. We are a company that sells chicken sandwiches but does so much more.

"To help people, that's in our soul. We want to spread good news and make people smile.”

Throughout the year, Chick-fil-A team members deliver food to Severna Park High School Leader Academy meetings, lend their restaurant space for meetings, and support the students in any other way they can.

“We’re very proud of the service projects that the students do,” Bennett said. “We want to give them the learning tools so they know how it’s going to be [after high school] and prepare them for the next stage of their life and careers.”

The students weren’t done. They secured a table for the Earth Day Festival and Isabella Suhar created an informational poster to grab the attention of attendees.

“We then set out to create awareness for the project as well as pass out pollinators, seed bombs (made by service learning students at Broadneck High School) and to collect K-Cups and aluminum cans,” Barnstead said.

They have collected more than 200 K-Cups from neighbors, faculty and students.

“We will be ordering a recycling box to send out 175 of them to be 100 percent recycled, and the next set that we collect will be turned into fertilizer for our butterfly garden,” Barnstead said.

The butterfly garden will also be expanded. Students are currently working on the plan with community input.

Severna Park High School was recertified as a Green School before this project, so this will help for next year.

The project is not only getting the leadership students involved but also other clubs.

“The engineering department, Sara Smith was excited because she can teach kids who are interested in soldering and making solar panels for solar chargers,” Barnstead said. “The Impact project for Chick-fil-A is as many people as you can get involved with it. That’s their vision. There’s a lot of people who are excited and getting involved.”