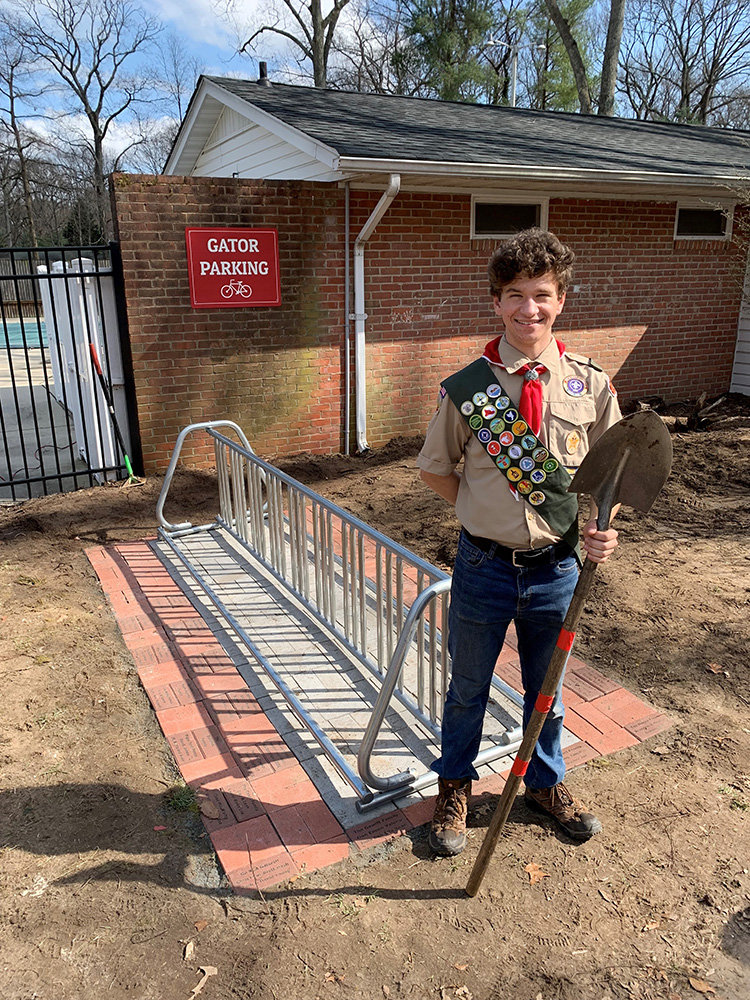 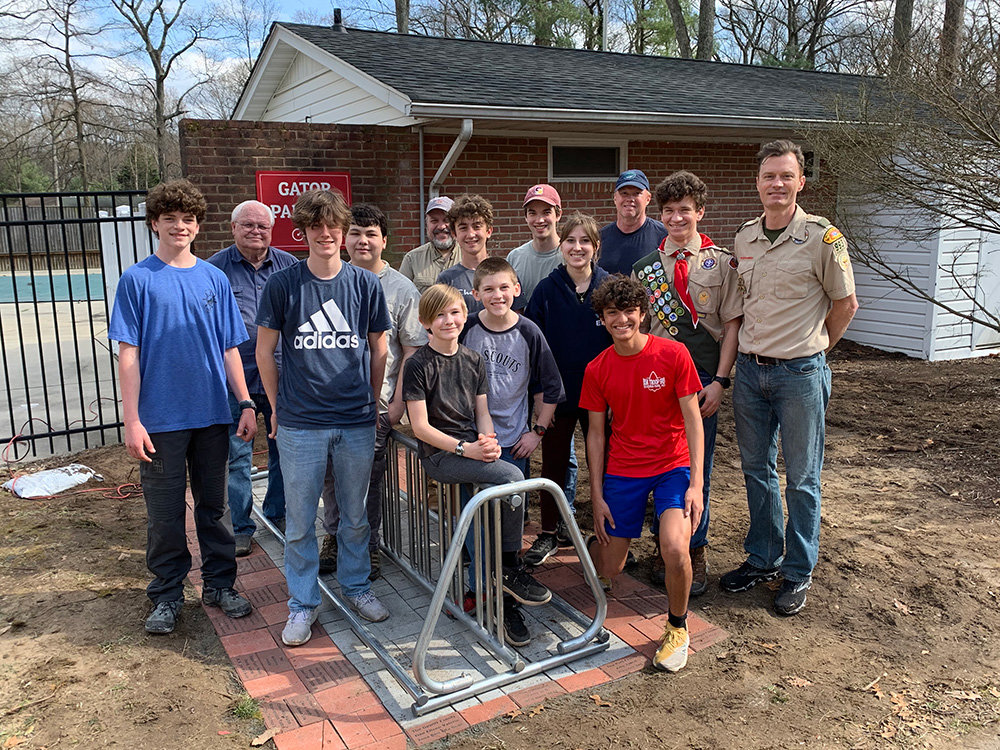 Scouts and scoutmasters from Troop 993 gathered after completing their project in March. Kenny Coleman and his father, Steve, are pictured on the far right.
Photos by Conor Doherty 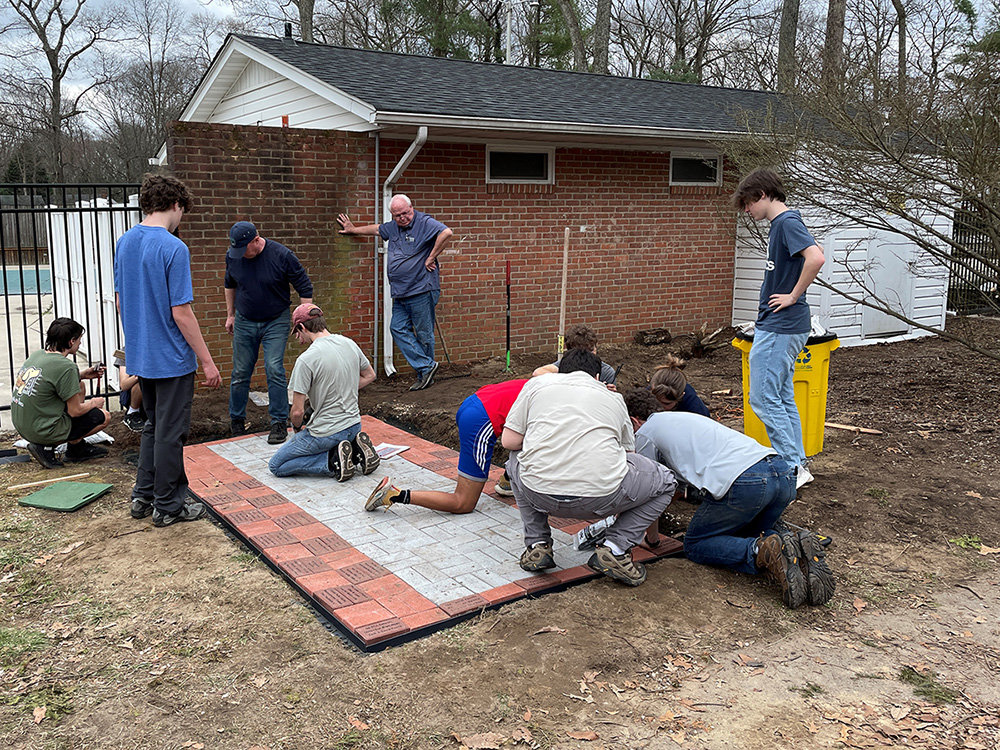 Members of Troop 993 laid down a brick patio for a bike rack in March.
Photos by Conor Doherty
Previous Next
Posted Thursday, April 14, 2022 10:38 am
By Conor Doherty

The Cape Arthur community swimming pool had a problem, one that the community wanted to find a way to mitigate. Kenny Coleman, a member of Troop 993, operating out of Severna Park United Methodist Church, felt that he could help.

According to Kenny’s father, Steve, an assistant scoutmaster for Troop 993, “Kenny wanted to make an impact in the community anyway he could and this project allowed him to do that.”

“We had this epidemic of bikes being stolen around here, which was a big problem,” Kenny explained. “So [community members] wanted a bike rack; we’ve had them before. They felt it would be a really productive thing to get done and stop the bikes from being stolen. And we chose the spot outside the pool because the lifeguard can also look over the bikes.”

Once Kenny chose the project idea and location, the next step was to secure funds to buy materials. Some scouts will try and get the support of a local business to provide funds or materials, while others, like Kenny, hold fundraising events.

As part of the project, red bricks would outline a patio that the bike rack would sit on top of. To raise funds, Kenny found a website that engraved bricks, so he sold the bricks to members of the community who then had personalized messages put into the brick.

“That kind of raised everything for the project,” he stated. “The rack, the rest of the bricks, a lot of the supplies that we needed. We were able to raise enough money to cover the entire project.”

Getting through the entire Eagle Scout process was a long journey for Kenny, made even longer by the pandemic. In fact, the brick outline for the patio has a cornerstone that says “2021” engraved in it as he had originally hoped to finish the project last summer.

“Our troop wasn’t doing as many Eagle Scout projects, and it was hard to get people to come out because the troop wasn’t having any meetings, so I couldn’t get the word out there,” he said. “On top of that was the typical Eagle Scout project litigation, getting signatures and approvals, so the pandemic just made those aspects more drawn out than they already usually are.”

Now that Kenny has finished his project, the final steps are to have a scoutmaster conference where his history in scouting is discussed, followed by the Eagle Scout Court of Honor. However, the biggest step has been completed and, for Kenny, it signaled the end of his scouting journey and the fulfillment of everything he had learned along that journey.

“It’s enormous because ever since I was a Cub Scout in the second grade, this has always been a goal of mine,” Kenny said. “It didn’t always feel attainable. Even as a new scout before I had reached any ranks, I was like, ‘There is no way I’m ever going to do an Eagle Scout project, get all of these merit badges.’ It just kind of seemed too far out there. But what I learned is that patience is probably your best friend with this whole process.

“On top of that, what I wanted to do was lead by example, but it’s more leading by delegation, and throughout my project and being a part of other Eagle Scout projects, you learn that there are a lot of different forms of leadership and it’s really important to know which form to apply and at which point.”