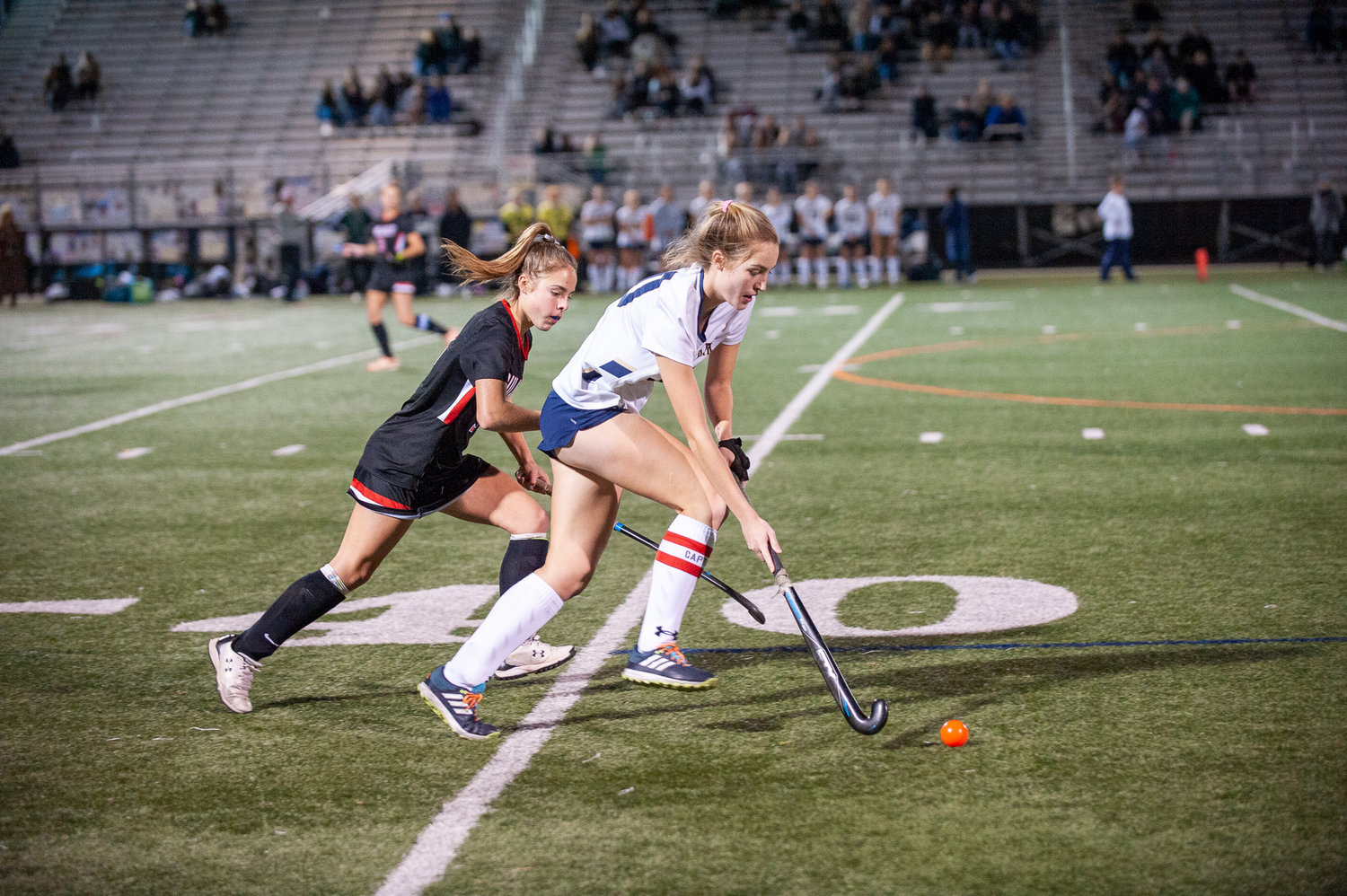 Senior Zoe Day helped keep the ball away from Dulaney during a 4-1 win in the 4A state semifinals.
Photos by Zach Sparks 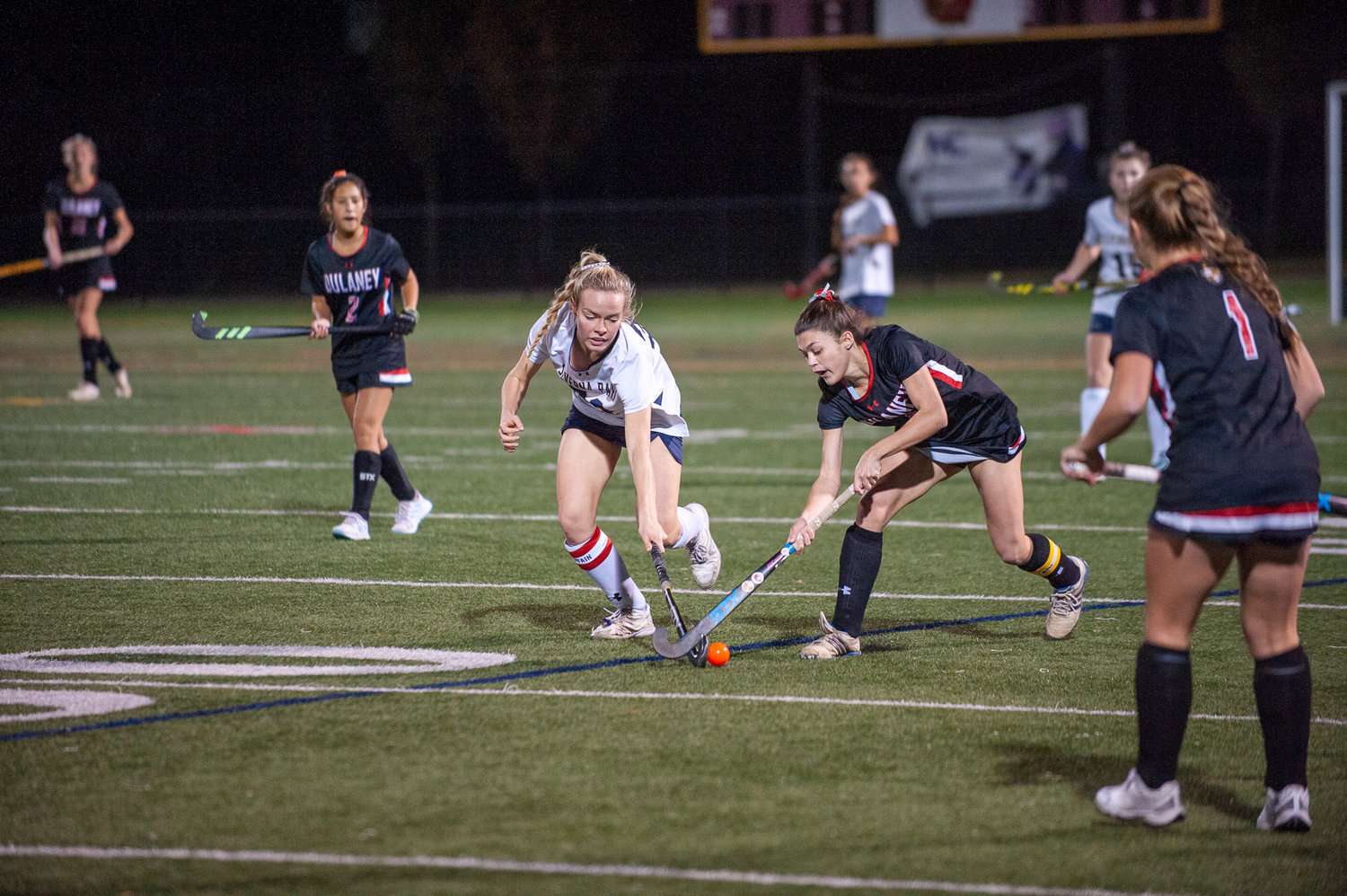 All season, the Severna Park field hockey team has won games without a star offensive player but with stellar defense, hustle and offensive contributions throughout the lineup. That was the formula during the Class 4A state semifinal match against Dulaney on November 9 as four Falcons scored in a 4-1 win at Paint Branch High School.

With that victory, No. 2 Severna Park advances to the Class 4A state championship Saturday against the No. 1 Churchill Bulldogs.

“We are not the high-scoring team normally,” said Severna Park field hockey head coach Shannon Garden. “We have won a lot of games 2-1, 1-0, 2-0, so to score four, it gives us so much confidence going into Saturday. Now we know that anybody can step up and score.”

Sophomore Noel Stefancik proved that early on, scoring with 4:13 left in the first quarter on an assist from Ava Drexler-Amey. The Falcons bested Dulaney in time of possession and had two penalty corners in the half, but the score remained 1-0 until, with 11 minutes remaining in the second quarter, senior Bekah Mayron assisted Maddie Evans on a penalty corner. Dulaney had their own opportunity to score off a corner before the half, but Severna Park’s defense smothered the Lions.

“As a team, we complement each other, working off of each other’s strengths and weaknesses,” said senior Gen Mullervy, when asked about the team effort. “Throughout the season, we’ve learned to bounce off each other and the benefits have shown through our consistency and our success.”

Mullervy added some insurance with 7:34 remaining in the third quarter, putting Severna Park ahead 3-0. But the Lions aggressively pushed their way downfield on several possessions, breaking through with 9:57 in the fourth quarter on a goal by Morgan Stolker. With a 3-1 lead, the Falcons did not slow down, looking for ways to keep the lead. Drexler-Amey found the cage with 3:36 left in the game, putting the game out of reach, 4-1.

“I dribbled through two girls, and I was one on one with the goalie, and it’s just about confidence shooting that ball,” Drexler Amey said.

“We made a lot of good passes to the center,” she said. “We had a good connection today. We got in the circle and we took a lot of shots today. It was a good outcome.”

That good outcome for Severna Park was also due to strong defense from senior Zoe Day, junior Meredith Schepens and others, all of whom were thrilled to see the offense clicking.

For Dulaney, the loss was a bittersweet end to the season. After losing their first three games against Garrison Forest, Hereford and Westminster, they nearly finished the rest of the season without another loss.

“I remember having a conversation with them like, ‘We have to turn the page and reset,’” said Dulaney head coach Meredith Lott. “And the growth I have seen in them, just in terms of their stick skills, the way they come together as a team, connecting passes, communication, it’s amazing and I am so grateful as their coach. In such a short amount of time, for them to progress so quickly is amazing.”

Lott said Severna Park had “insane passes” and she wished her team had more practice on turf fields and not just grass. But Severna Park, she said, was a tough opponent to prepare for regardless of the playing surface.

“The last couple practices, we focused on forcing corners,” Lott said. “We also focused on fast breaks. ‘How are we going to catch that defense — which is a great defense — off guard?’ So, the fact we were able to score one goal off them, it’s not a win in my book, but it is a positive spin to this loss.”

The game provided plenty of benefits for Severna Park too.

“Dulaney is such a good team,” Day said. “They brought on intensity too. It gives us great energy and great reassurance going into states.”

The Class 4A state final against Churchill will be played at 6:30pm on Saturday at Washington College in Chestertown. Garden said this week’s practices will be vital to her team’s success on Saturday.

“We really have to mark up and keep practicing our scoring,” Garden said. “Our defense is stellar. We need to get out and score first, and we’ll see what happens.”