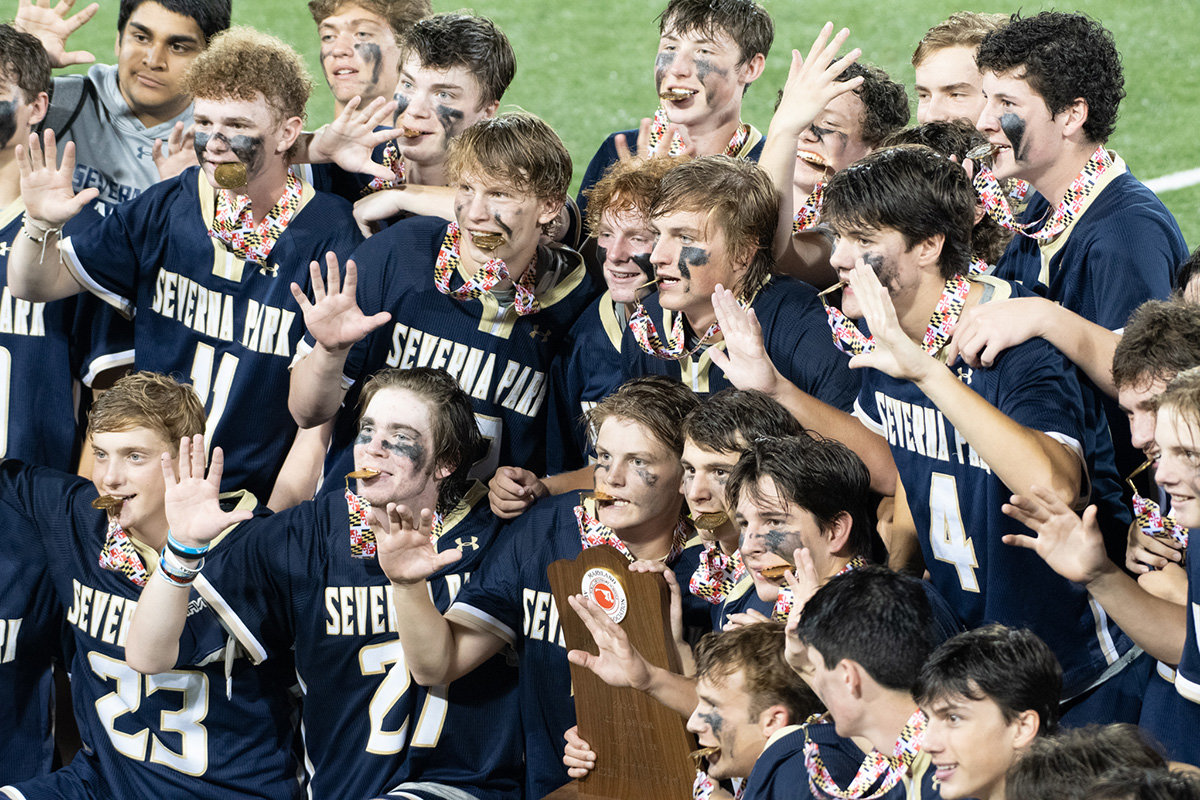 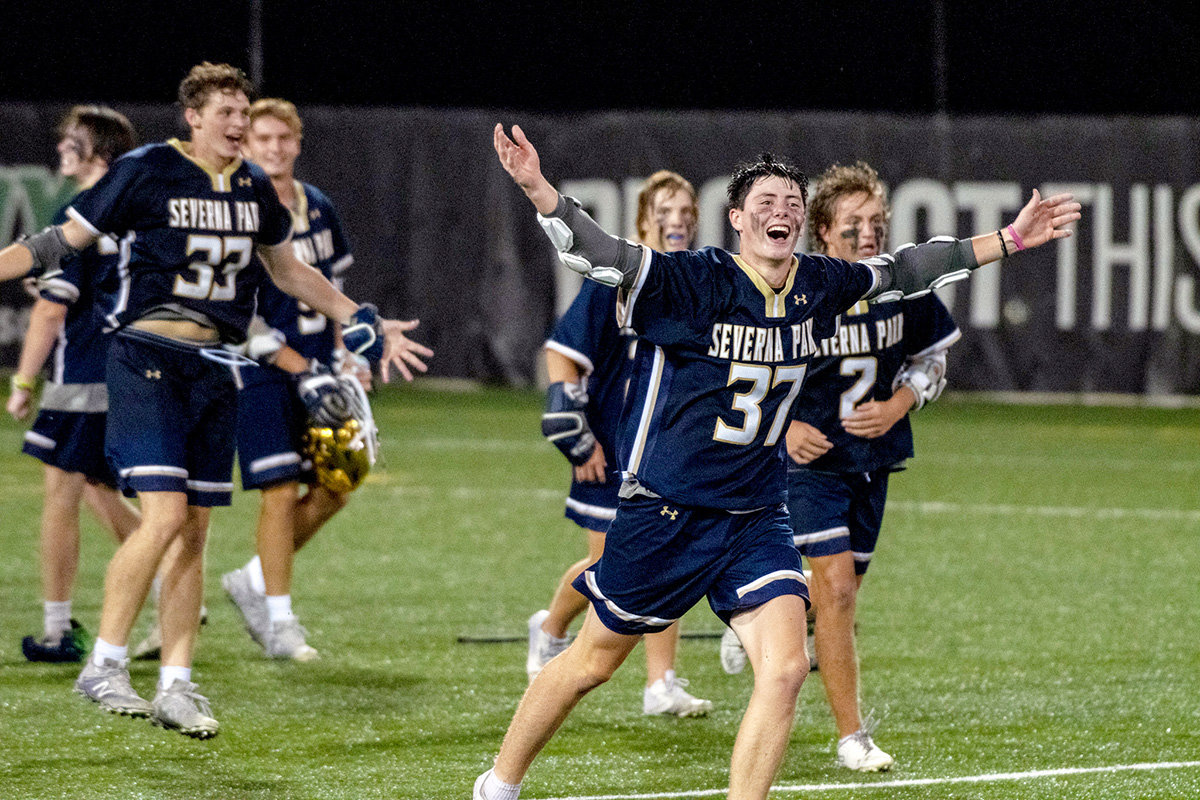 Parker Sealey (37) and his teammates were euphoric after the win.
Photos by Zach Sparks 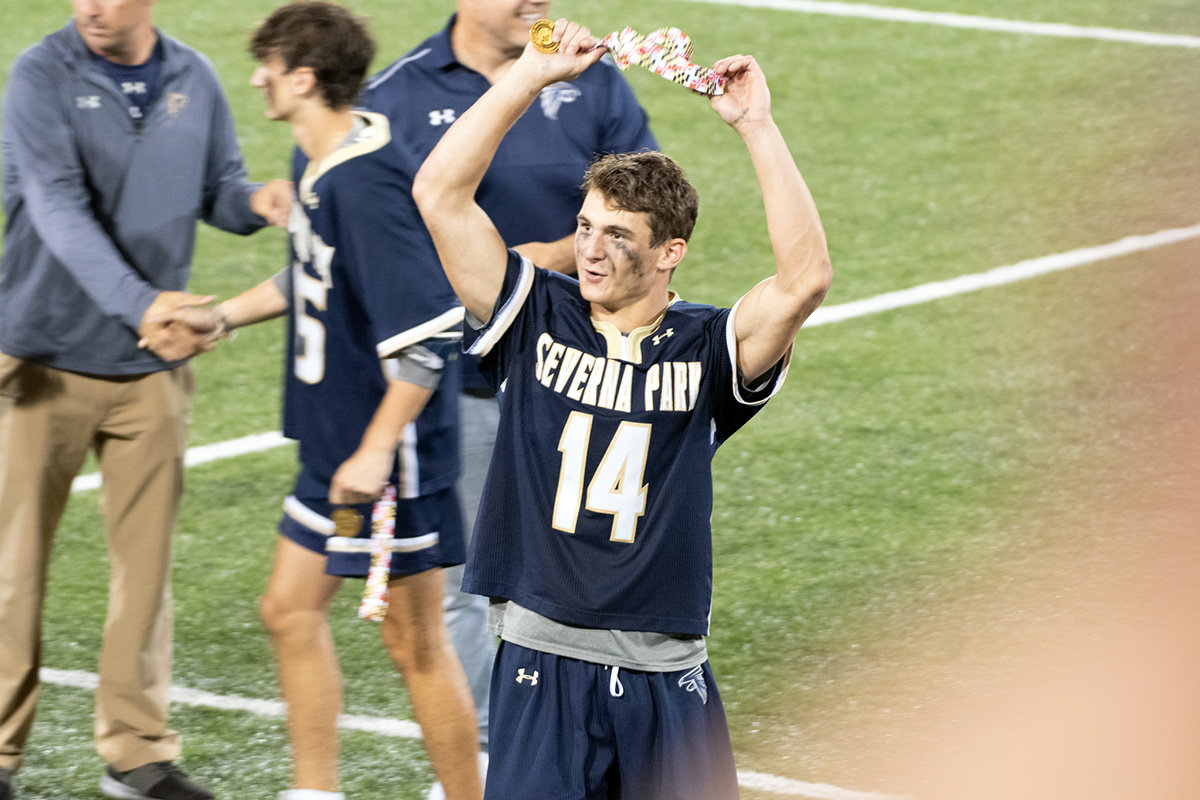 Colin Shadowens celebrated after he and his team won the 4A state championship.
Photos by Zach Sparks 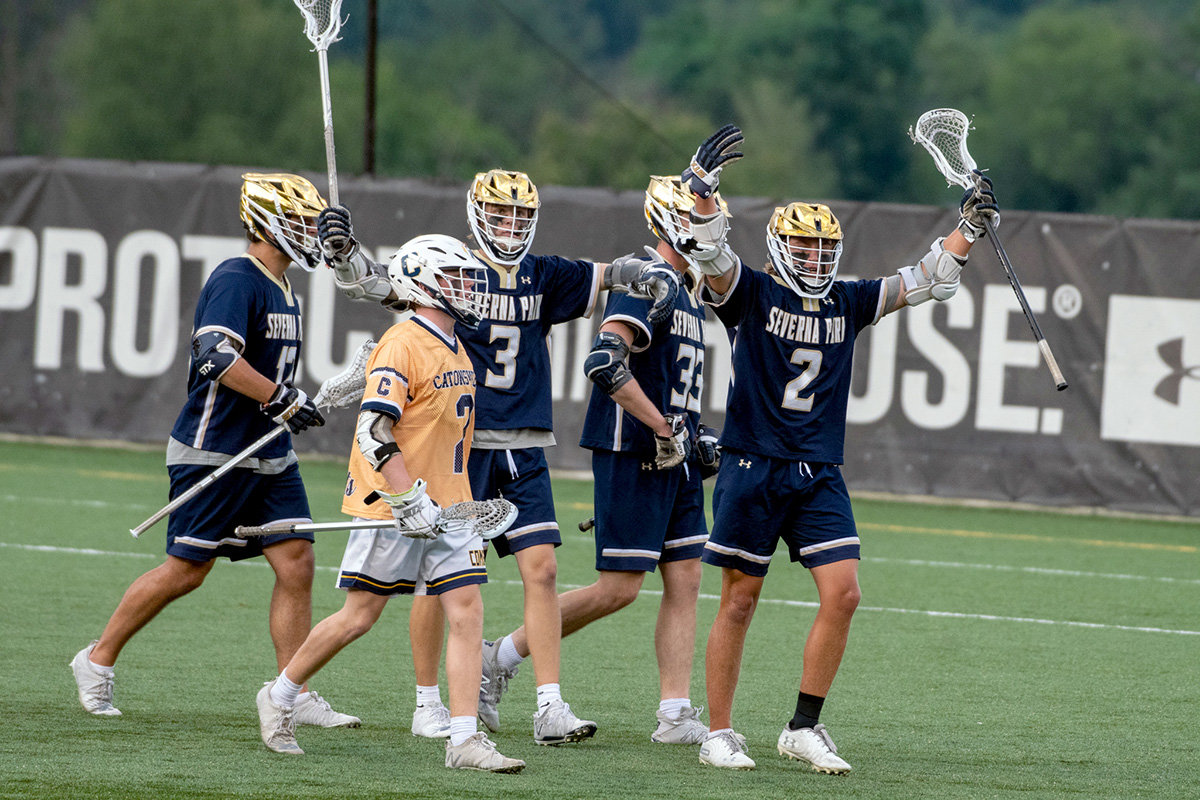 The Falcons celebrated after scoring a goal in the first quarter of the 4A state championship against Catonsville on June 19.
Photos by Zach Sparks 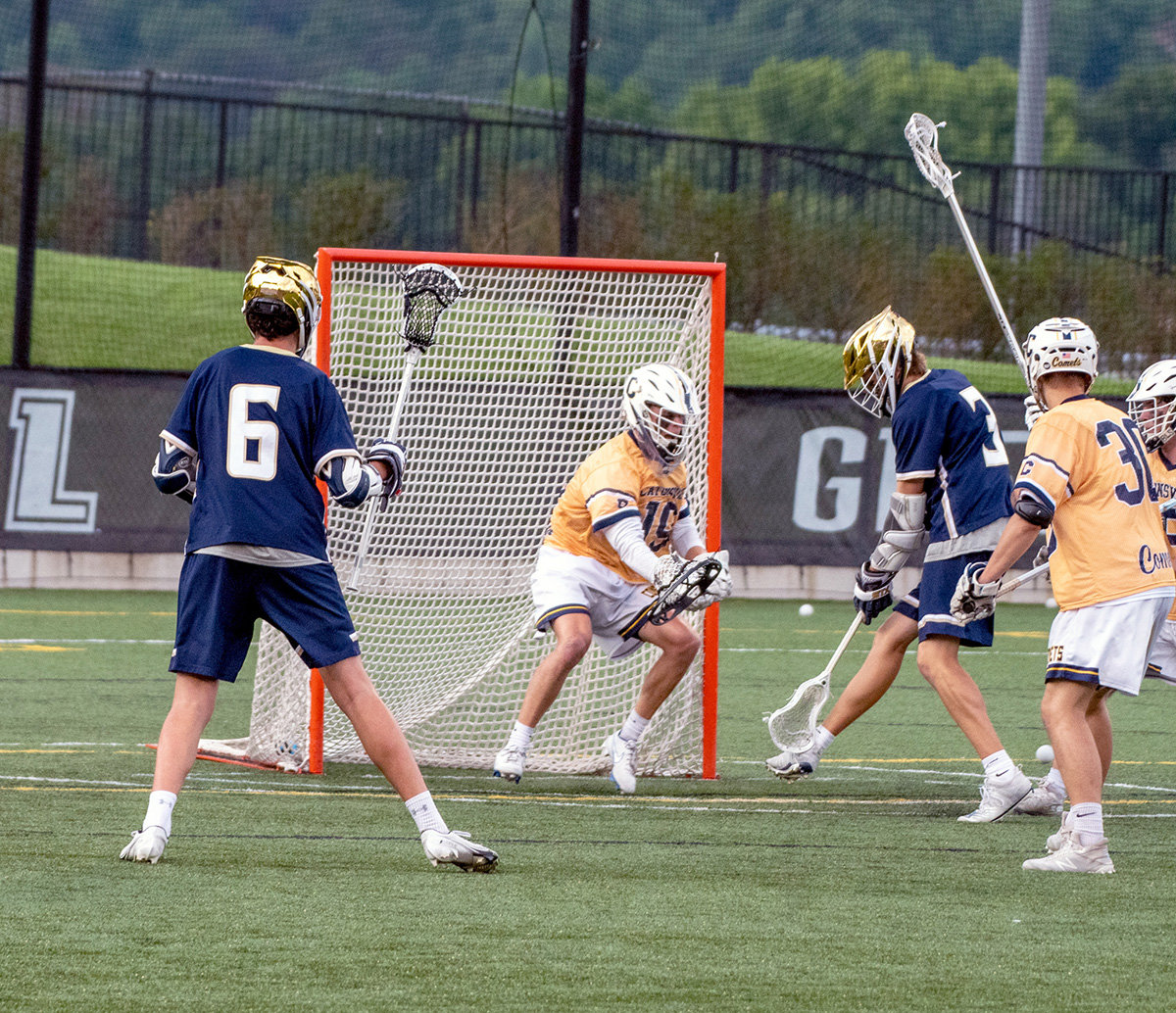 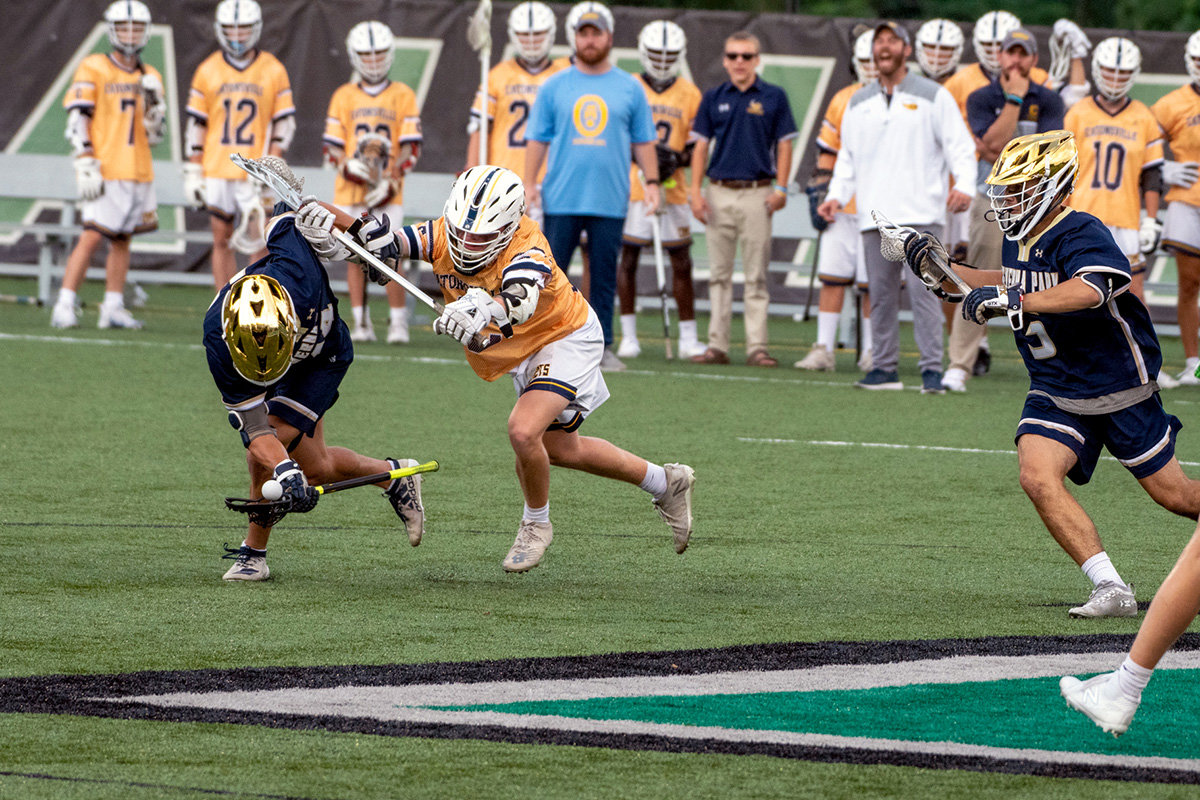 Colin Shadowens won 14 of 15 faceoffs during the 4A state championship game.
Photos by Zach Sparks 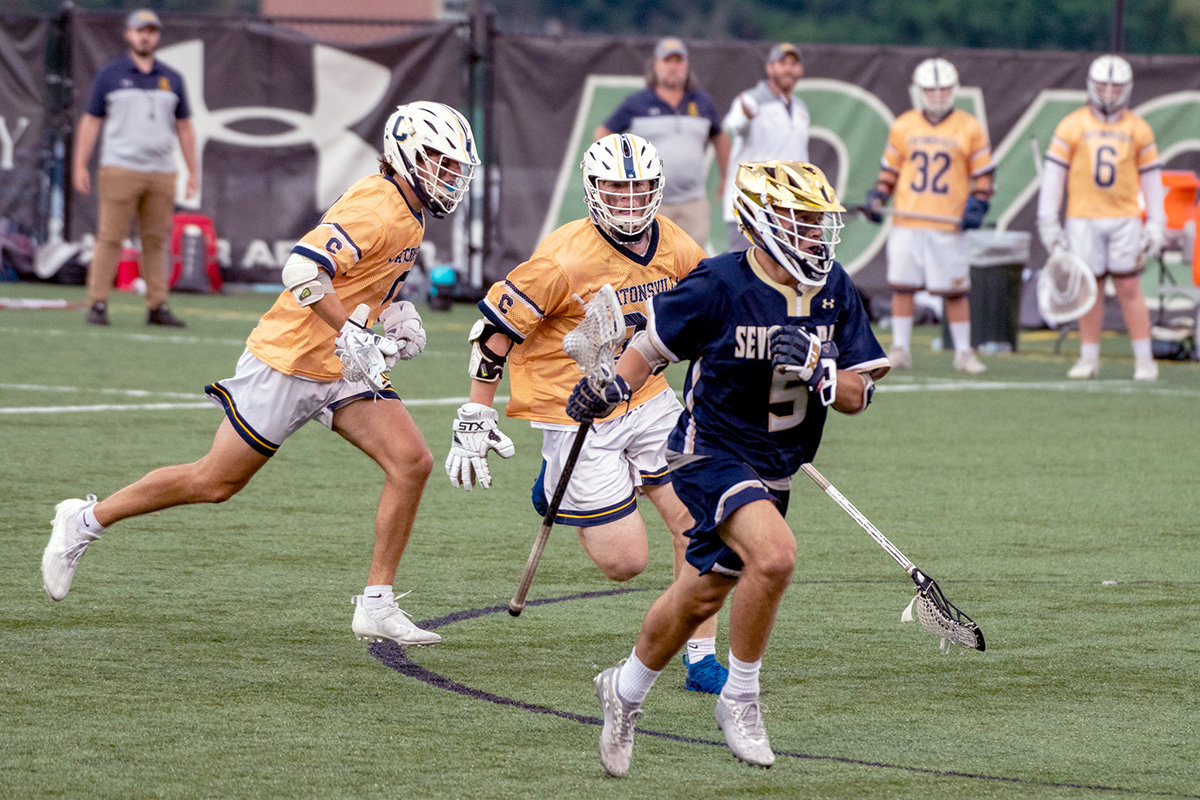 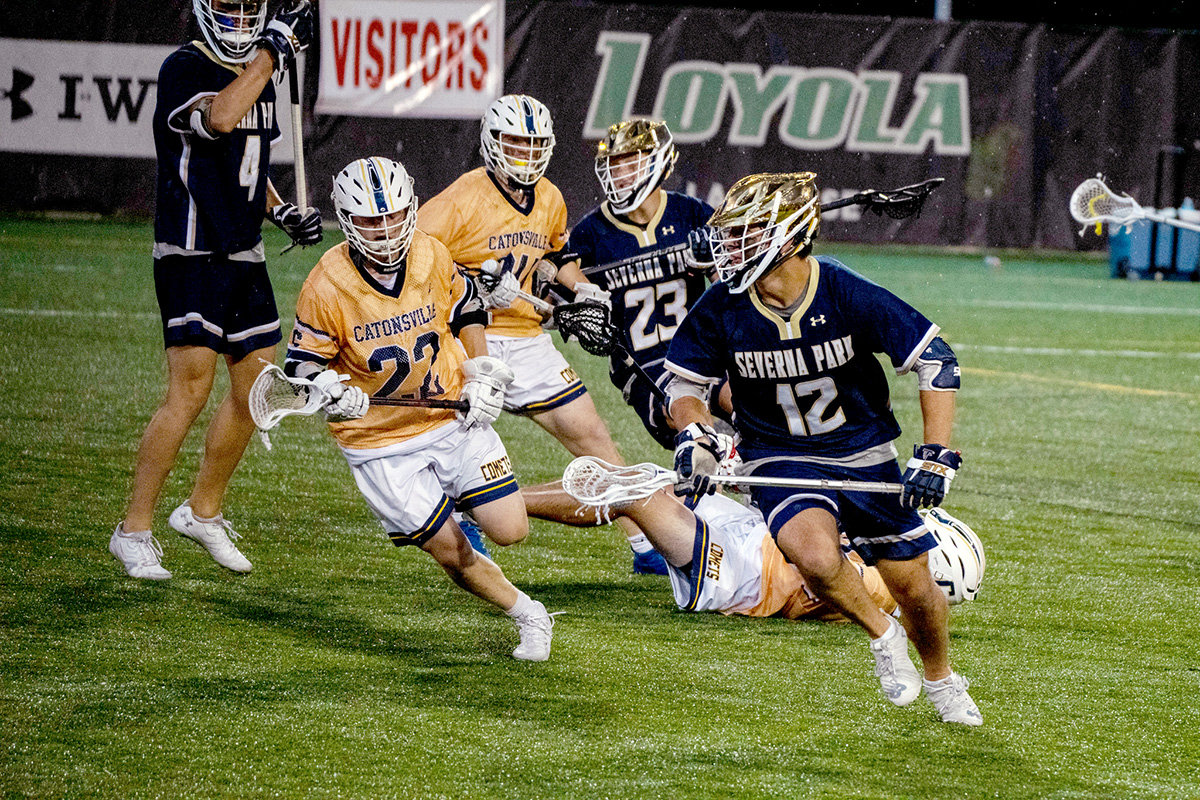 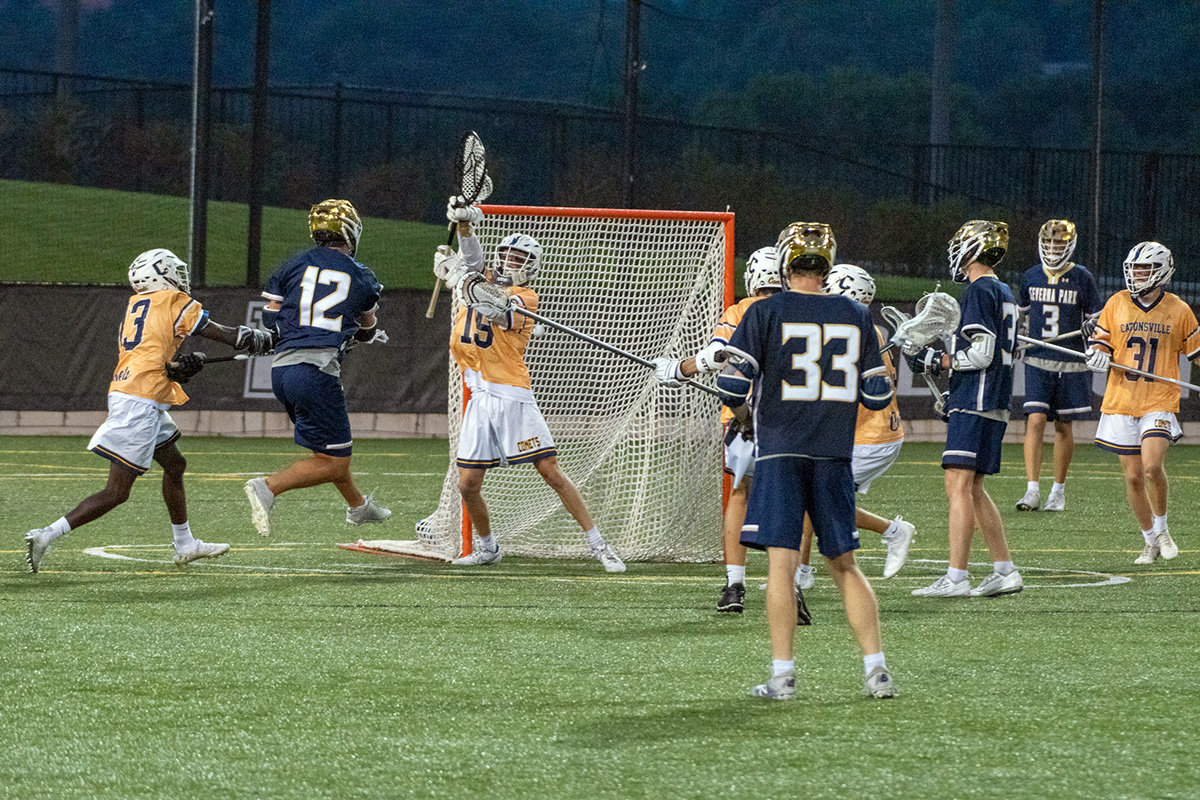 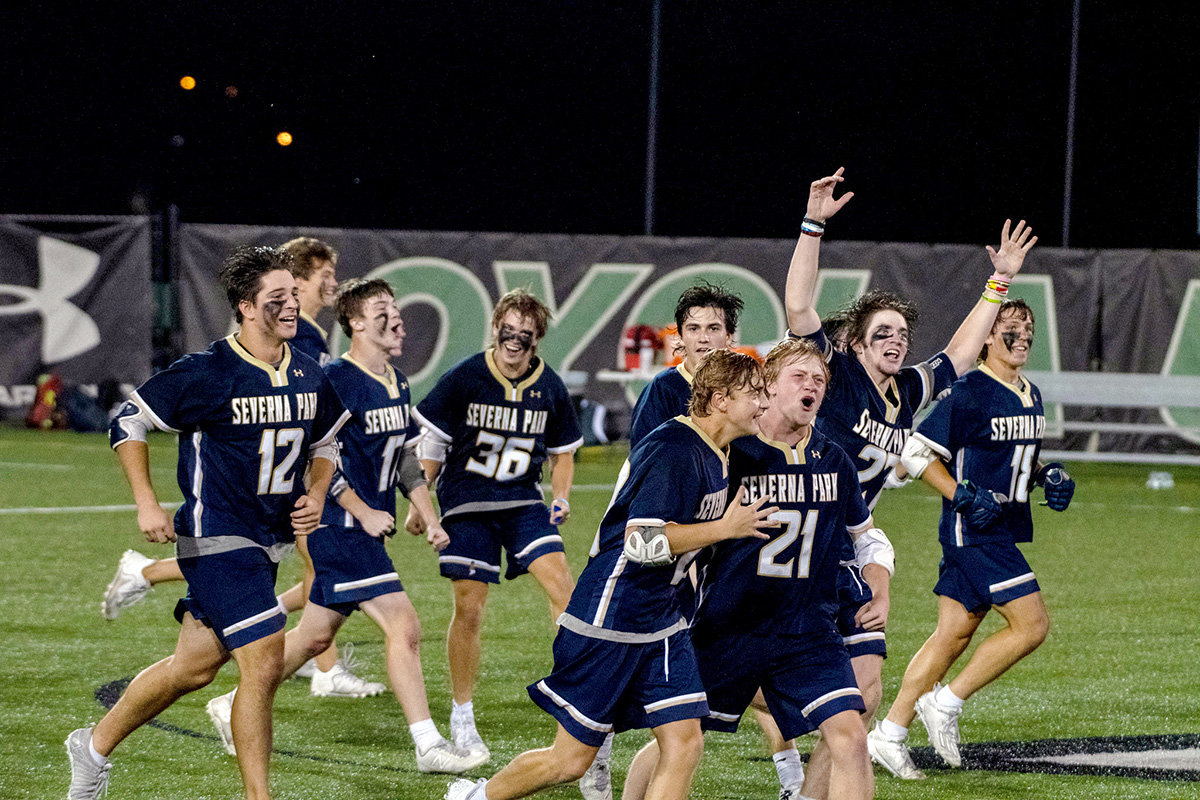 The Falcons were pumped after the final buzzer went off.
Photos by Zach Sparks Despite a dominant regular season, there were times during the playoffs when the Falcons could have faltered. Broadneck put up a battle during a 6-5 Falcons win in the regional playoffs. Severna Park faced another tight contest on the road against No. 1 seed Sherwood, who stayed within one goal of the No. 4 seeded Falcons almost the entire second half before Severna Park prevailed 11-10 in the state semifinal.

The Falcons never flinched, and during the 4A state championship at Loyola University’s Ridley Athletic Complex on June 19, they peaked at the right time for a 11-3 win over Catonsville.

It was all Severna Park as Charlie Evans scored a Class 4A state championship record seven goals, Colin Shadowens won 14 of 15 faceoffs, and the defense kept Catonsville off the board for nearly three quarters.

“It speaks to everyone buying in,” Evans said after the win. “The coaches kept preparing us, the younger guys kept stepping up.”

Everyone stepped up to deliver Severna Park boys lacrosse its 10th state championship, tied with Hereford, which won the 2A title this year, for most in Maryland history.

Evans bounced a shot into goal and then scored another for the early 2-0 lead. Kyle Griffith found the net and then Evans scored two more, the second on a feed from Shadowens.

“When I’m on a fast break, he’s the one I’m hitting,” Shadowens said of Evans. “… he’s burying the ball wherever he is on the field.”

An underhand shot from Evans pushed the lead to 6-0. Shadowens won the ensuing faceoff and took it the distance himself, burying it for the 7-0 lead as Falcons fans erupted into applause. Connor Koistinen added his first score to give Severna Park an 8-0 lead at the half.

Severna Park was firing on all cylinders, playing confident and loose.

“I felt like the last game we were playing not to lose instead of to win, so we tried to loosen the mood,” Falcons head coach Travis Loving said.

That loose style of play continued in the third quarter. Evans earned a wraparound goal and Koistinen notched his second goal. Catonsville scored with 11.9 seconds left in the third on a goal from Tyler Mikalaski but it was too little, too late for the Comets. Evans added his seventh score of the game and Catonsville found the net two times late. As the clock ran out, the final score remained 11-3 in favor of the Falcons.

Evans’ seven goals eclipsed the prior Class 4A record set by Damon Scordo of Dulaney in 1991, Mike Haertel of Arundel in 1995 and Ben Chisholm of South River in 2011. Sean Dougherty of Centennial set the record for most goals in any Maryland state public school championship game with nine in 2002.

Severna Park’s relentless attack was key to the win. Catonsville head coach KR Schultz said that although Severna Park’s 10-man ride posed a challenge for opposing teams all year, he thought he had prepared a good counter strategy.

“I just didn’t put them in the right position,” he said of his players, adding that his team respected but was not intimidated by the Falcons. “They’re a confident bunch. They don’t fear anyone.”

The Falcons were an experienced team with 15 seniors, but it was no given that they would return to the finals. Several of the top scorers from the last state championship team in 2019 had graduated (the 2020 season was lost to the coronavirus pandemic). Loving stepped into the role of head coach for the first time after working as a defensive coach under previous head coach Dave Earl.

Shadowens called it a blessing to have a season and to end the season as a champion.