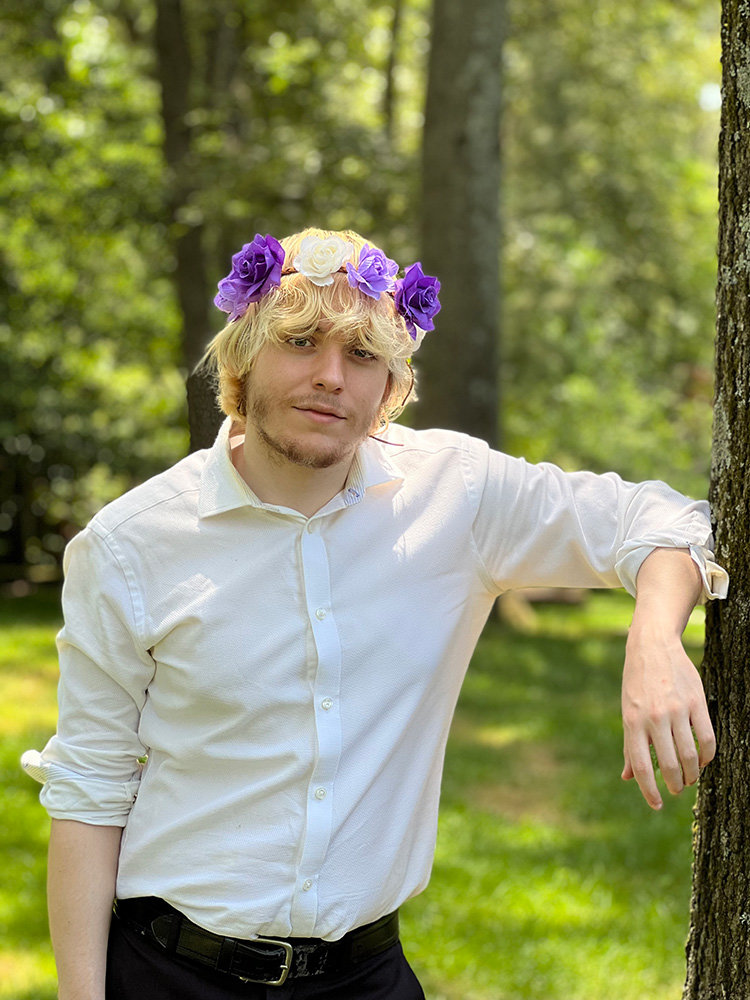 Jack Benedict enjoyed playing Lear because of the character’s range. King Lear goes through polarizing emotions throughout the play, emphasizing the fact that he is indeed going mad.
Photos By Judy Tacyn 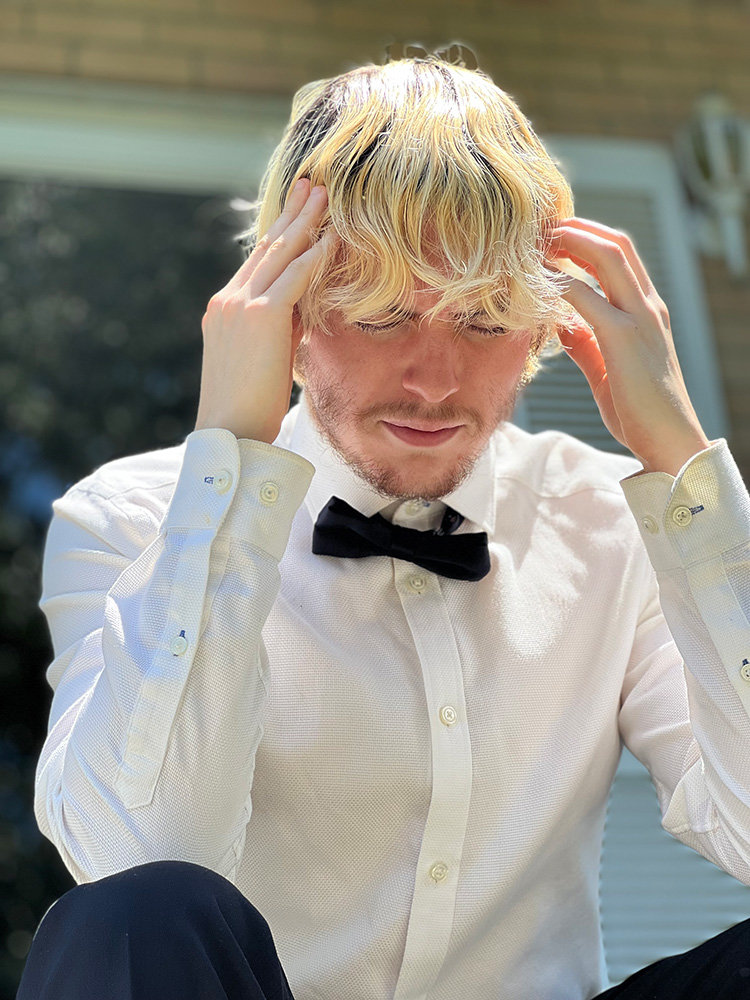 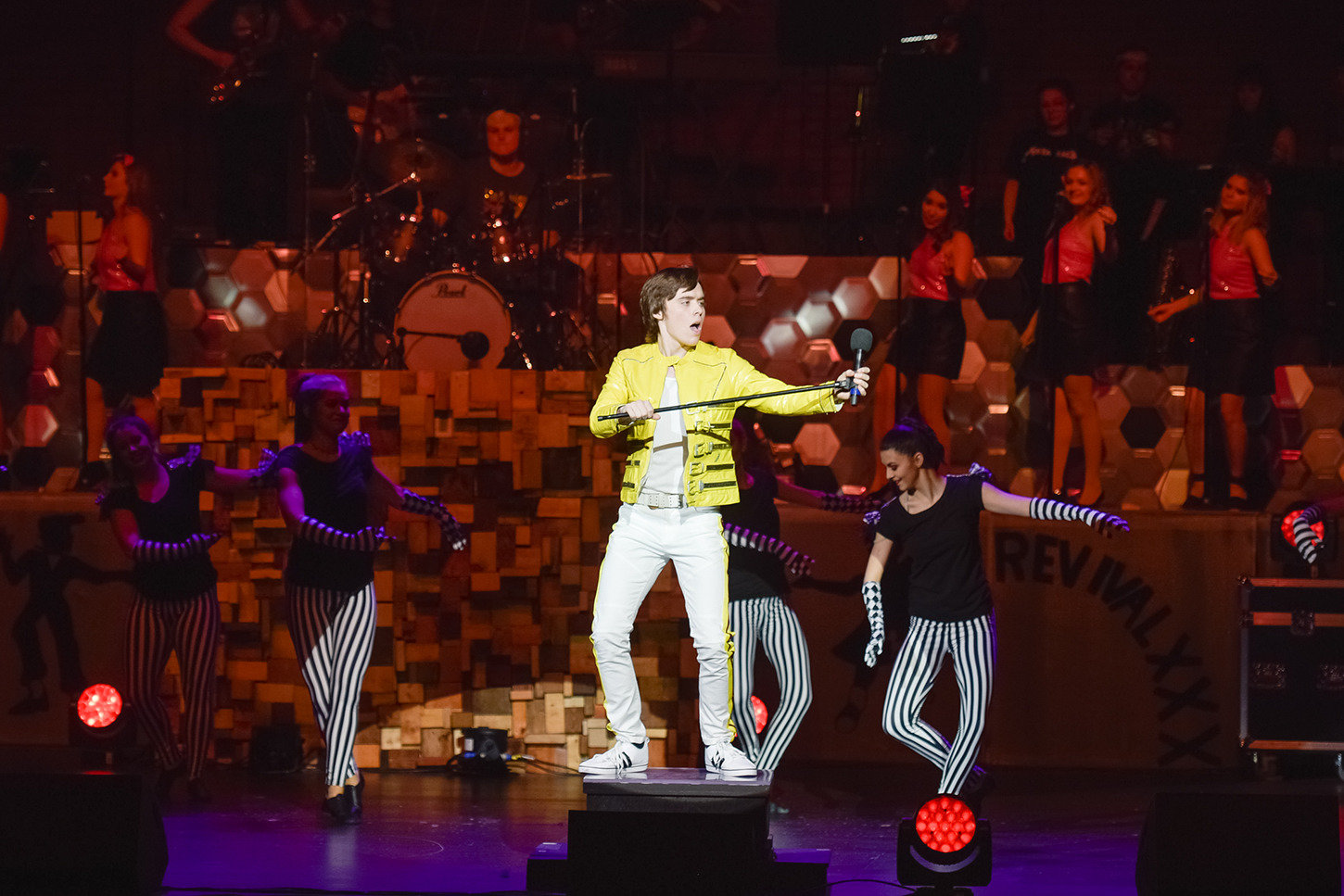 Before his 2019 graduation from Severna Park High School, Jack Benedict was a four-year cast member of the beloved Rock ‘N’ Roll Revival. With his theatrical virtuoso flair and high-energy percussion from the bandstand, Benedict pumped up the cast and audience with his musical talents. Add in pitch-perfect vocals in onstage solos, Benedict was a powerful and animated performer in every facet of the annual ensemble performance.

Benedict took his passion, exuberance and tremendous talents to the University of Maryland after graduation. To finish his junior year in College Park, Benedict recently dazzled audiences in the Clarice Smith Performing Arts Center with his portrayal of the protagonist in the Maryland Shakespeare Players production of “King Lear.”

“Our awesome directors decided to set our play at a carnival, emphasizing the madness of the plot and characters,” Benedict said. “Between the wonderful language, amazing actors, lighting, stage fighting and drama, I know that any audience member will be thoroughly entertained.”

Benedict enjoyed playing Lear because of the character’s range. King Lear goes through polarizing emotions throughout the play, emphasizing the fact that he is indeed going mad.

“I think he is great in that I could play him in different ways. It was my choice to figure out how sympathetic I wanted to make him or how malicious I wanted him to be,” Benedict said. “He has such incredible and visceral language, and I thank Shakespeare for making his character so interesting.”

Benedict chose to expose Lear’s weaknesses, however, showing that the king has and is atoning for his mistakes. With a slight hunch and sharp, deliberate, almost flailing arm movements, Benedict also chose to give his character the hint of some physical ailments, as well as showing that Lear’s mind is deteriorating.

Now performing in his fourth Shakespeare production (he’s also been part of a “Midsummer Night’s Dream” as Lysander, “Hamlet” as Laertes and “Much Ado About Nothing” as Don John), Benedict said his appreciation for Shakespeare has grown considerably over the past three years.

“Originally I didn’t particularly like Shakespeare at all, but after joining the Maryland Shakespeare Players, it sparked my ‘dormant’ love for the Bard I think,” Benedict added.

Shakespeare’s writing was prolific in the early 1600s, yet his plays continue to be favorites with worldwide performance companies.

“I think that because his language is so adaptable, and his stories are so timeless, it is very easy for people to relate to all of his characters at least in some way,” Benedict said. “I think within our educational institutions, Shakespeare has been built up over the course of hundreds of years to be this genius writer - which he is, and I think that his plays are so dense and his language can be interpreted in so many ways, it is impossible not to come back and reread and rewatch his work.

“I think it is incredibly fascinating that his plays have been able to be translated into the 21st century, but that says a lot about the strength of his writing,” Benedict continued. “His plays have themes that are still relatable today: love, jealously, miscommunication, trauma, angst, perseverance, family, honor and so many more.”

The rising Terp senior is pursuing a Bachelor of Science degree in economics with a minor in Japanese language. In addition to honing his acting skills as part of the Maryland Shakespeare Players club, he plays piano and spends much of his free time improving his Japanese speaking and literacy skills.

After graduation, Benedict hopes to land in Japan. “One thing I am interested in right now is going to Japan to study the effects of radiation from nuclear energy production and the horrific Fukushima disaster on places outside of Tokyo, and the economic and agricultural impact it has on farms and small businesses,” he said.

To see the production, go to www.youtube.com/watch?v=hEY24dzSVoQ.

“Acting against other actors of such caliber makes acting so much more fun and easy, and time goes by so much faster onstage,” Benedict said. “I think the Maryland Shakespeare Players have created an amazing community of positivity and I think that is what I love to get out most of performing.”