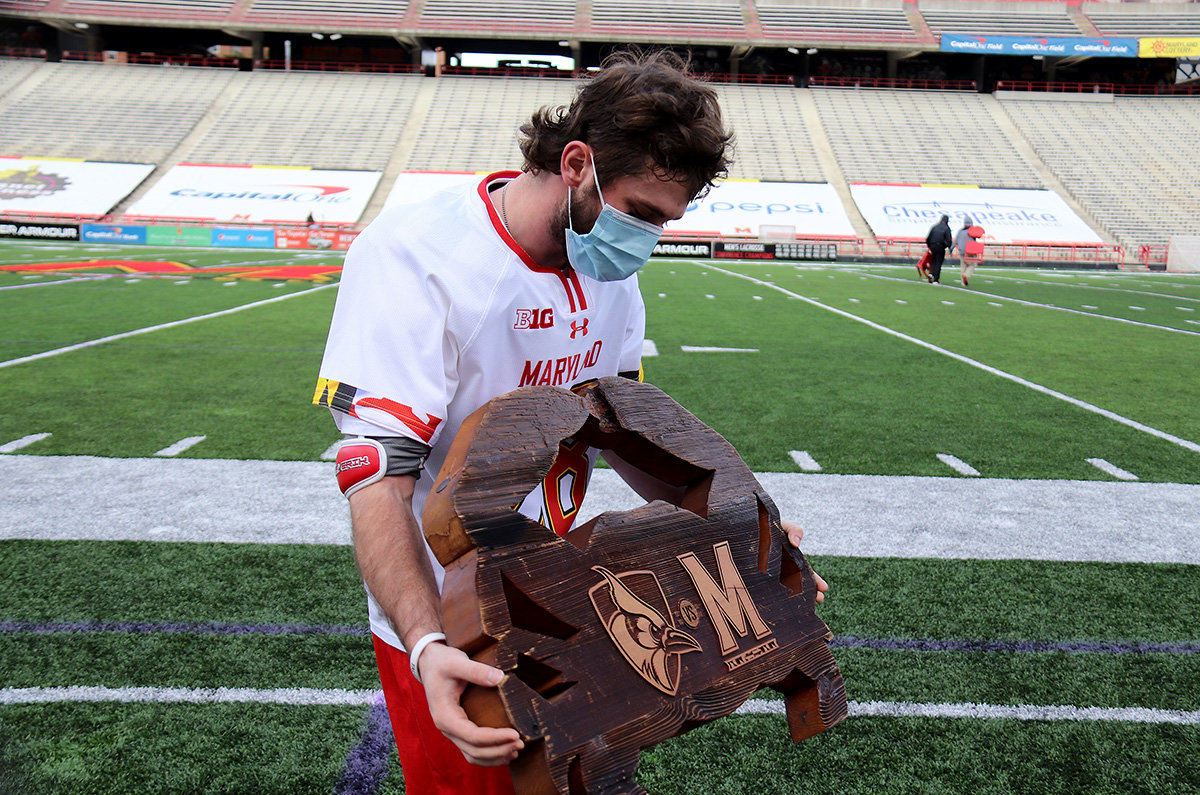 Josh Coffman remained on the field after Maryland beat Johns Hopkins 12-10 in the Big Ten tournament on May 8.
Photos courtesy of University of Maryland Athletics 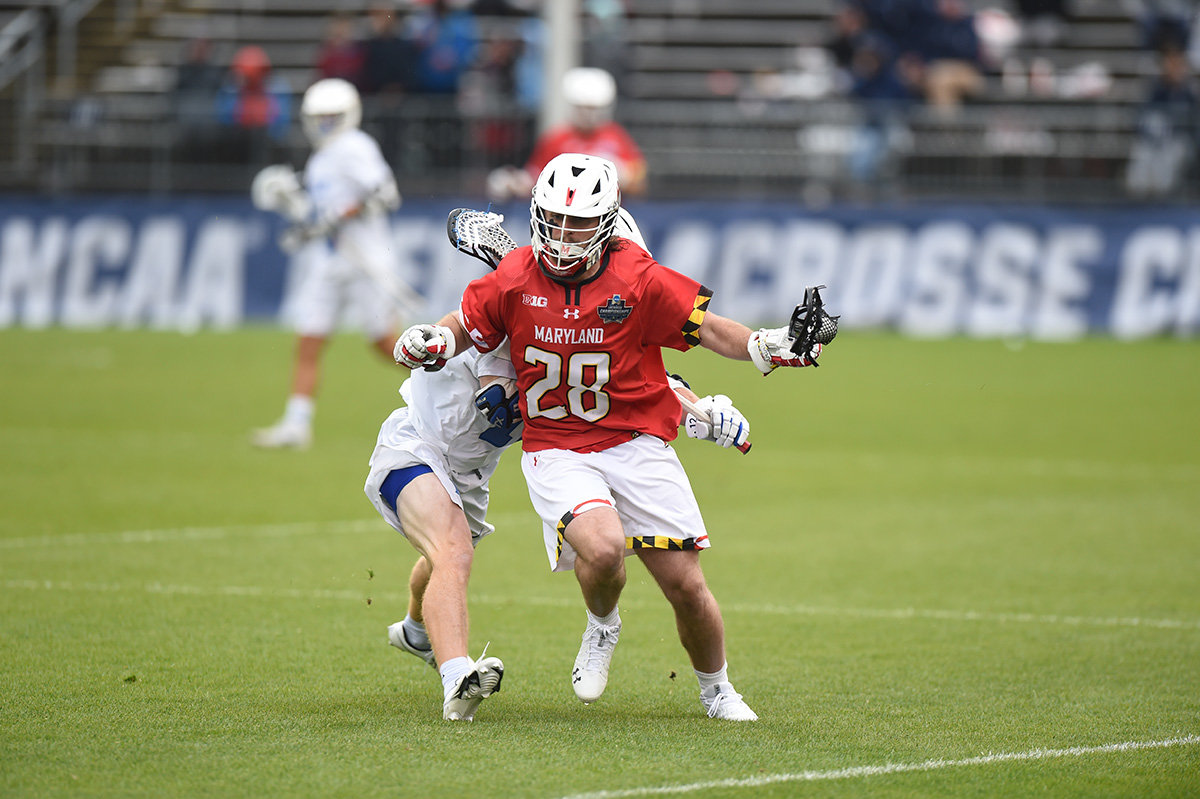 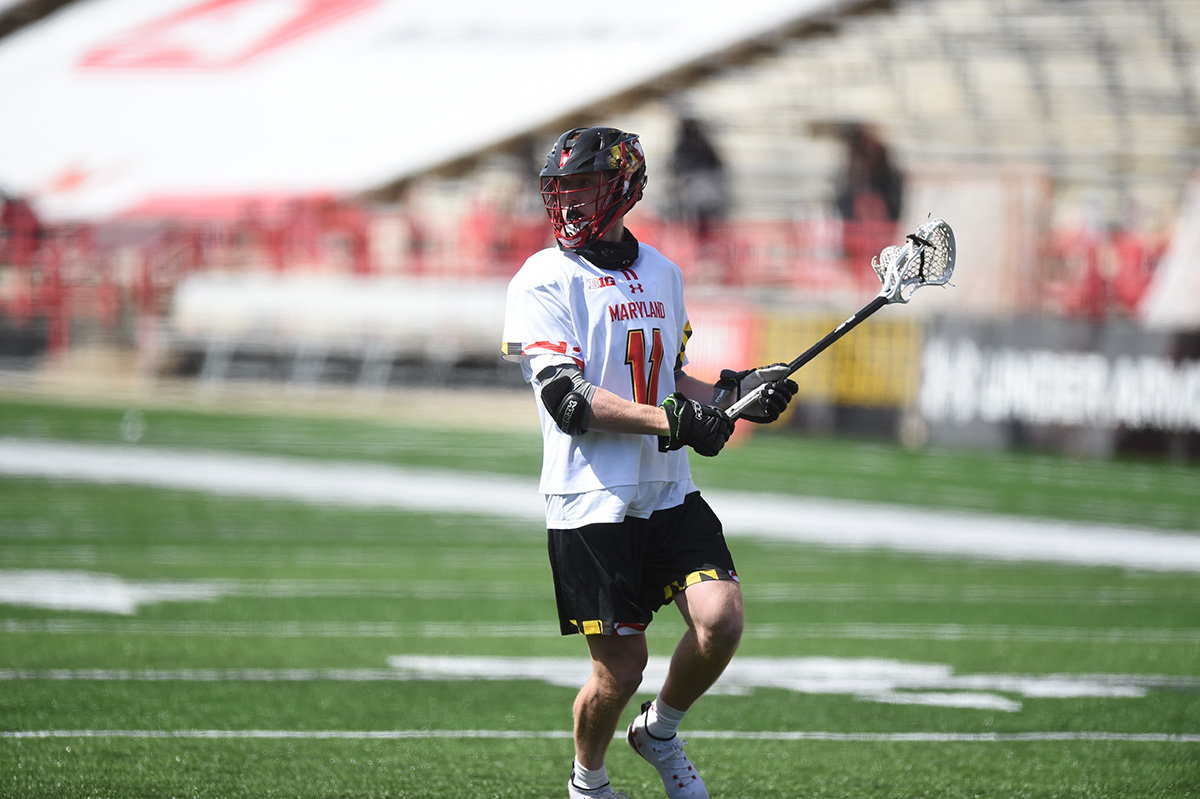 Chase Cope said it was “a gift” to be able to play lacrosse this year.
Photos courtesy of University of Maryland Athletics 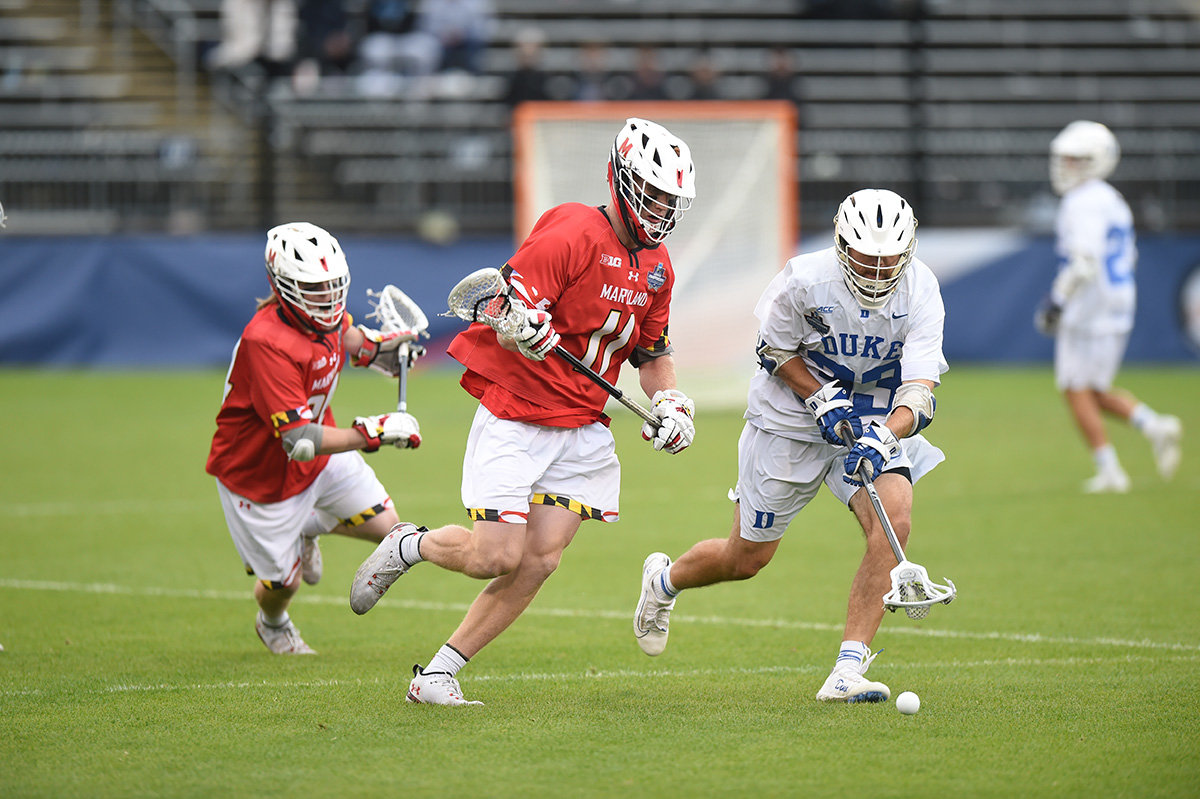 Chase Cope said it was “a gift” to be able to play lacrosse this year.
Photos courtesy of University of Maryland Athletics
Previous Next
Posted Thursday, July 1, 2021 4:25 pm
By Zach Sparks l zach@severnaparkvoice.com

Josh Coffman and Chase Cope reached the pinnacle of high school lacrosse as three-time state champions with Severna Park High School. This year, with the University of Maryland, they came up one goal short of winning an NCAA title.

A crowd of 14,816 fans packed Rentschler Field in Connecticut for the 2021 final.

“It was unlike any game I’ve played in before,” Coffman said. “The atmosphere, the back and forth. Being up and down. It was unreal.”

When it was over, the two Terps midfielders had each other to lean on, not only as teammates but as close friends.

Coffman and Cope grew up together, from Benfield Elementary to Severna Park Middle to Severna Park High School, where they continued to hone their craft after playing on club teams together.

“It was very rewarding, looking back,” Coffman said. “Whether it was Trent Bellotte or Chase, all the work we put in, shooting, dodging on each other, all the stuff we did in our free time to push each other.”

The bond between Cope and Coffman has continued to grow during college. The friends are roommates, and they drive together to practices.

“Josh had a semester ahead of me, so he helped me with all sorts of things and showed me the way,” said Cope, who just completed his junior year along with Coffman.

After starting 5-1 in 2020, their season was ended prematurely because of the coronavirus pandemic.

“The last season getting cut short was a heartbreak for all of us, so coming back this year, we had the goal to do something special,” Coffman said. “We kept reminding each other to do this for the other guys, not for ourselves. There was a lot of sacrifice — we couldn’t see family and friends for the duration of the season — and we were playing with a purpose.”

That passion and purpose carried Maryland to a 15-0 start leading up to the championship game. The regular season included wins over ranked opponents Penn State (twice), Johns Hopkins, Rutgers (twice) and Ohio State (twice). During the NCAA tournament, the Terps beat Vermont, No. 6 Notre Dame in overtime and No. 2 Duke, setting up a championship final against No. 4 Virginia.

Early in the match, Coffman scored on an assist from Jared Bernhardt to put his team up 3-2.

“We got the ball on the clear. The look they were in, it was a 10-man,” Coffman said. “A middie on the field was ball-watching, so I cut up the backside and dumped it in.”

Despite the loss, Cope said it was a gift to step on the field this season.

“It was an incredible season from where we started and not knowing whether we would be able to get there,” Cope said. “We had great leadership from guys like Jared, Logan [Wisnauskas] and Anthony [DeMaio] who knew what it took to get there.”

Cope believes the Terps have the right leadership to get back to the NCAA tournament. So does Coffman.

“We have a strong core,” Coffman said. “Losing Jared and some of the other guys, that is going to hurt, but we are confident in our guys. We won’t sleep until we get back next year and finish this time.”

Now with their season over, both players enjoyed hearing about Severna Park’s 4A state championship win over Catonsville. Cope has a brother on the team, and both he and Coffman were seniors when some of the younger guys — Colin Shadowens, Kyle Griffith, Rory Sullivan, Kurt Klaus and others — were new to the team.

The friends are also cherishing a season that “will be remembered forever,” according to Coffman.

“Getting to the Final Four and championship weekend was a first for me,” Cope said. “To be able to do that was unbelievable. Being able to make those connections with guys on the team, I’ll never take that for granted.”