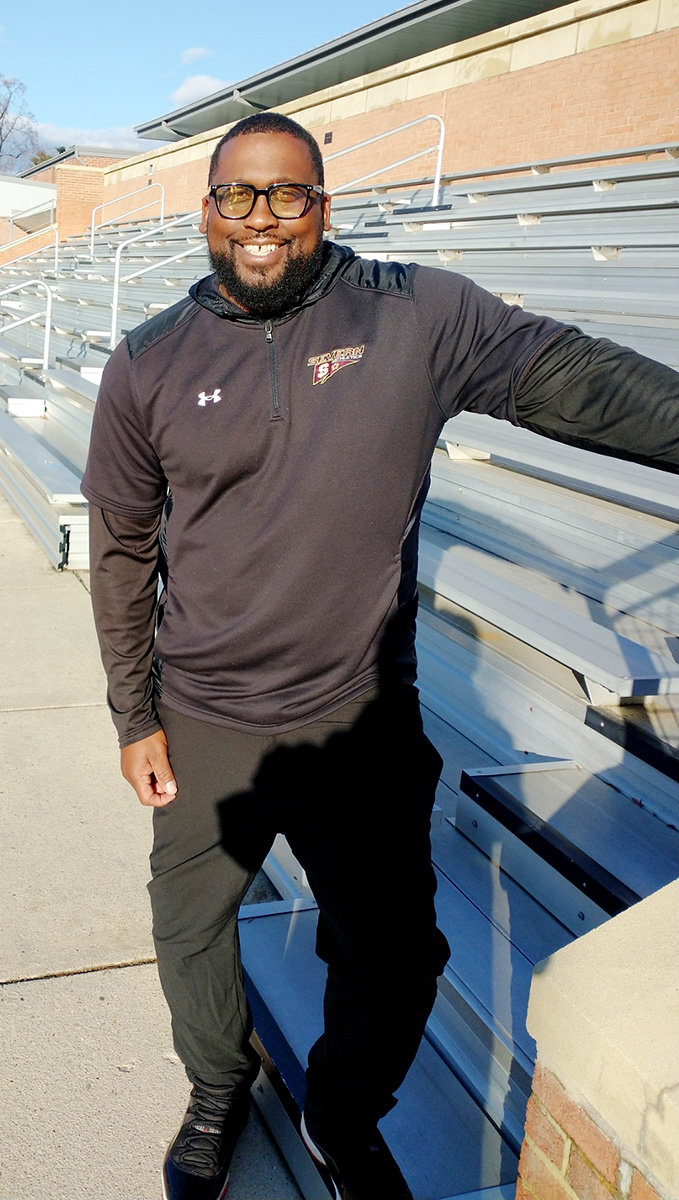 Severn School’s head football coach, Demetrius Ballard, engineered the Severn Admirals to a 7-3 record and the MIAA C Conference championship in his first year as head coach. Ballard guided the Admirals from worst to first in 2022.
Photo by Kevin Murnane
Posted Thursday, December 8, 2022 11:48 am
By Kevin Murnane

Last spring, only 20 Severn School students attended new head football coach Demetrius Ballard’s first meeting. After the meeting, he questioned if he would be able to field a competitive team with a meager number of players.

The Admirals were coming off of a 0-10 season and the student base was less than enthusiastic about supporting the team.

“It was over the latter part of the spring semester that some of the lacrosse players expressed interest in coming out in the fall, namely Nick Sotiropoulos, who was a running back and kicker, and Jacob Todd, who had quarterback experience,” Ballard said. “Kids were recruiting kids in the hallway.”

Ballard then hosted two spring practices in which additional athletes noticed his enthusiasm, organization and positivity. During the summer, the numbers kept increasing during workouts. Momentum and optimism built up.

“At the start of fall practice, we had 48 kids come out for the team, and many of them were great athletes from the lacrosse team,” Ballard said. “The pied pipers were Sotiropoulos and Todd. They elevated our toughness, competitiveness and athleticism.”

The Admirals started out 3-0 and elevated the buzz around the student body while attendance was at record levels with sold-out crowds. Game four brought Maret School of Washington, D.C., to the Evergreen Road campus, and Maret dominated the fourth quarter in beating the Admirals 40-7.

“We were tied 7-7 going into the fourth quarter and then we had numerous turnovers and we never regained our competitiveness,” Ballard said.

Severn had not experienced the higher level of athleticism and size that Maret brought to the trenches and skill positions. It awakened the Admirals on how to prepare for the rest of the season.

“That game against Maret was the best thing that could have happened to us,” Ballard said. “It toughened us up and we realized what we needed to work on. It was the key to the season.”

Severn went on to win the next four out of five games and won the deciding game of the MIAA C Conference against Annapolis Area Christian School 42-41 in late October. Todd scored six touchdowns in the game and the Admirals had to fend off the pesky Eagles.

Todd, who is slated to attend Princeton on a lacrosse scholarship next year, also gave Ballard one of his prized memories of the season when they were standing on the sidelines before the homecoming game and Todd told Ballard that he has never seen a crowd that massive at Severn before.

“He was just in awe, seeing all those people,” Ballard said.

Even though Ballard is losing his two biggest offensive juggernauts in Todd and Sotiropoulos, the Admirals return all but eight seniors, including their entire offensive and defensive lines.

“We’ll have Division I recruiters on our campus next year looking at our offensive linemen including Bo Fowler, who is our best player, and Alan Sheffers,” Ballard said. “Also, we have a freshman running back in Jules Hamilton, who is a special player.”

Athletic Director Julian Domenech said Ballard has been a welcome addition to Severn.

“Not only has he increased our win total, but he has also brought a culture and work ethic that has changed our football program for the future,” Domenech said.

Next year, Ballard has added Baltimore powerhouses St. Paul’s and Boys Latin to Severn School’s schedule and he looks forward to recruiting the area’s youth football players to the Severn campus and maintaining the success of the football program.