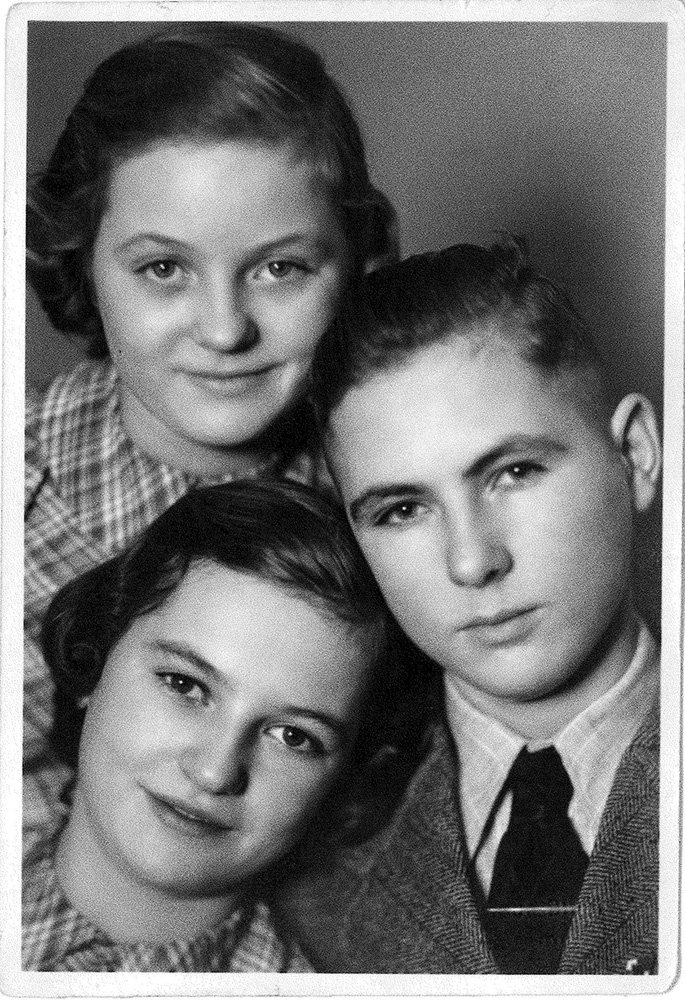 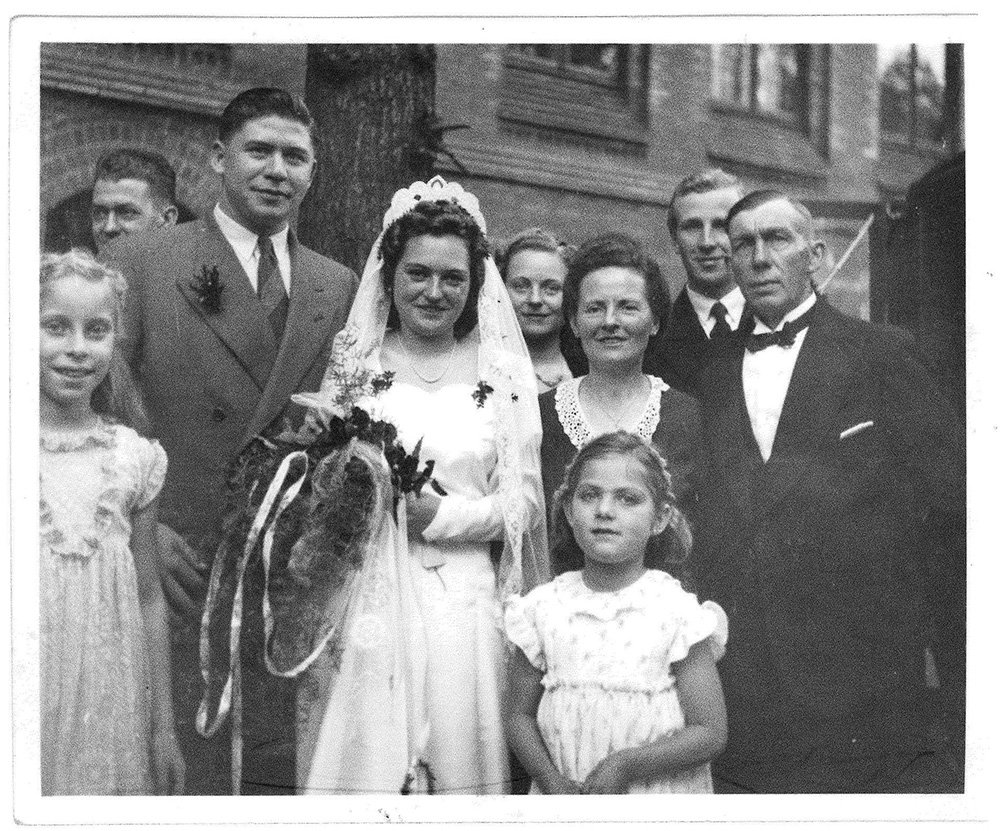 Inge and Bob Chisholm are pictured after their wedding in Germany with family members.
Photos Provided 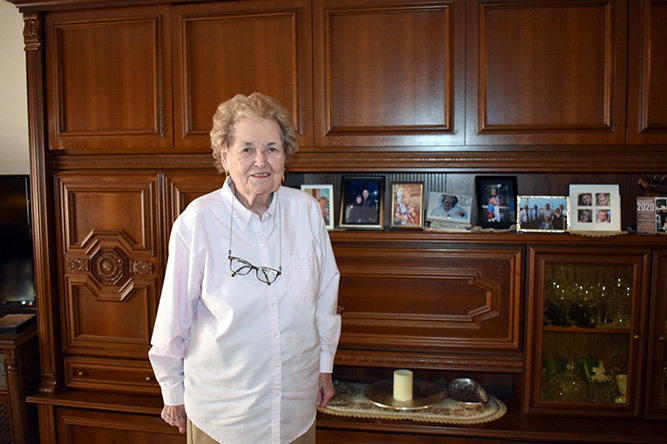 Ingeborg “Inge” Chisholm’s life has truly been “the American dream.” The wife of the late Robert “Bob” Chisholm, Inge has lived for almost 50 years in Severna Park, where she established roots, raised a family, worked and made friends — all as an immigrant.

Inge was born in Bremen, Germany, where she lived with her mother, father, brother and sister. She was a child during World War II.

“You would think that all the German people knew what Hitler was doing,” Inge said. “Most of us had no idea what was going on. No one talked about it.”

During the war, her father was in charge of guarding a group of French prisoners of war. He would go out of his way to bring the prisoners fresh meat and food. Although he was required to serve, he did not agree with what was happening. Prisoners were frequently swapped between guards, but he became famous amongst the prisoners for his kindness.

“They can only stay with the same people for about two months,” said Inge. “They don't want them to get acquainted. Some other guys came and they always asked for dad. He was a very good person. Let's face it, he was the best.”

Tragically, her father faced consequences for his heroic actions. He was sent to the frontlines, where he died. Until recently, his gravesite was lost, but it was recently found in Latvia. Inge describes her mother as a workaholic and a strict parent. While she may not have been the most outwardly loving mother, she worked hard to provide for her children.

After the war, Inge worked at the motor pool, where she nearly perfected her English and met her future husband, an American soldier, Bob. The couple was married in the Catholic church in Germany. In 1948, Inge and Bob boarded a boat called the USAT Edmund B. Alexander and traveled for six days to the United States. The newlywed couple spent Thanksgiving and Bob’s birthday on the ship. Inge and Bob arrived in New York and made the day-long train ride to Iowa, where Bob’s family lived. They lived there for a time and moved to Maryland for the first time in 1951. They spent some time living in Wisconsin, and ultimately chose to settle down for good in Severna Park in 1972.

A friend of the family, Bobby Geddings, was a builder, so he built the home that she currently lives in. In this house, she raised her five children, watched her children grow, and gathered with friends and family. She made her beloved German potato pancakes, sauerkraut, spaghetti with pepperoni, bratwurst and various German desserts. She brought over traditions like opening Christmas gifts on Christmas Eve. Inge’s mother-in-law, who was also a German immigrant and spoke German, advised her against teaching her children to speak the language, although she did teach them a few words.

“We learned some German as we were growing up,” said Inge’s son, Herb Chisholm. “My mom had index cards and we would learn.”

Although Inge adopted German traditions and culture in her household, she rarely missed home. She kept in touch with her siblings, mother, classmates and visited as often as she could with her five children and husband, but Inge made Severna Park her new home.

“She became part of the fabric of the community,” said Herb. “She worked in the community and raised five children here.”

The Geddings family, which built the house for Bob and Inge, opened a car wash in Glen Burnie called BG’s Carwash, and Bob became the manager. Inge stumbled into a job almost by accident.

“I found a job I didn't ask for,” she explained. “For the opening, I took a bottle of wine and it started snowing. Barbara Geddings taught me to use the cash register. I had never touched a cash register before that. Next thing I knew, I had a part-time job.”

Inge became a second mother to many of the boys who worked at the car wash. She brought in desserts and treats and became close with regular customers. She even ran into a few fellow Germans. Bob died in 1992, but Inge continued to work there. She retired after 20 years, when she was in her 70s. To this day, she visits the car wash frequently with desserts for the men and women working. Everyone there knows her.

Herb said his mother was strict, but seeing her interact with the boys at the car wash painted a new picture of her.

“As we got older, I would see her and her relationship with those boys at the car wash,” said Herb. “I got a very different viewpoint of my mom because she didn't have a good teacher, as far as how to nurture and hug and kiss in love. And she brought some of that into our relationship, early on. She was very much a disciplinarian, and it was hard to take care of five children.”

Inge currently has 10 grandchildren and 12 great-grandchildren. She said that being a grandmother is her greatest joy.

“I enjoy my grandchildren,” said Inge. “I never really had time to really enjoy my kids. We were alone out here without relatives. I was the only one to take care of them.”

“She has truly become the matriarch,” Mary Ann said.

Living in Severna Park, Inge frequently ran into other German immigrants. She said this served as a reminder that we all play a role in this community. Herb said that he hopes that his mother’s story inspires other immigrants to tell their stories.

“‘Immigrant’ has become somewhat of a dirty word,” Herb said. "We, other than Native Americans, are ALL immigrants, with wonderful histories.”