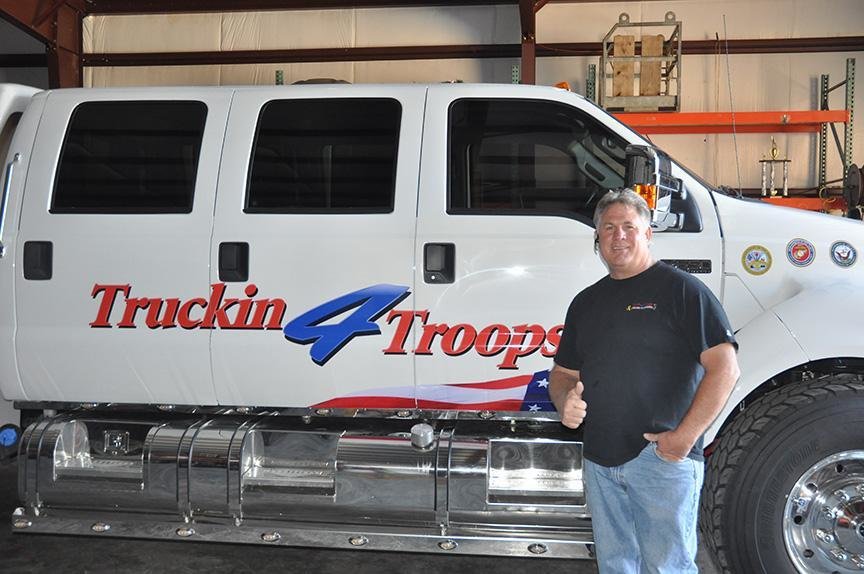 “The governor deeply respects our men and women in uniform,” press secretary Erin Montgomery noted. Accordingly, Hogan was happy to have the opportunity to honor Truckin 4 Troops and help its cause. Among the representatives from Governor Hogan at the Classy in Camo gala were the governor’s daughter, Jaymi Sterling, and Maryland Secretary of Veterans Affairs George Owings, who presented the proclamation.

Mallary said he played no role in Hogan’s proclamation. In fact, Mallary did not even find out about the proclamation until the day it was released, March 14, which was also Truckin 4 Troop’s Classy in Camo gala. Though surprised by the honor, Mallary was thrilled with the recognition. “I thought it was pretty cool, pretty special,” Mallary conveyed. “It’s pretty cool to have a day recognized by the governor. He believes in what we do.”

March 14 was a big day for Truckin 4 Troops in more ways than one, as the Classy in Camo gala raised $50,000 for the organization. Close to 200 people attended the event at Michael’s on the South River. Mallary noted the event was nearly booked just two weeks after it was announced.

Because nobody involved with Truckin 4 Troops takes a salary, 100 percent of the proceeds from the event and other donations go directly toward helping veterans.

Truckin 4 Troops provides numerous services to veterans, including helping them purchase vehicles, taking them to events like Monster Jam in Las Vegas, providing them with transportation and hosting birthday and live day parties for them. Mallary explained live day parties are a celebration of the veteran’s survival of their injuries.

All of these services help toward achieving Truckin 4 Troops’ overall goal. “Our primary mission is to get the wounded veterans out of the hospital and keep them active,” Mallary explained.

Though the organization provides many services now, it started from humble beginnings when Mallary and his son purchased iPods preloaded with patriotic music for veterans. Soon after, Mallary noticed a dearth of resources going toward helping veterans, which prompted Mallary to purchase his first Truckin 4 Troops Ford F-650 truck. Mallary originally bought the truck just to advertise veterans’ needs, but when a group of veterans needed transportation from the airport, Mallary jumped at the opportunity to help. As Mallary spent more time with the veterans, he recognized the needs they had, which shaped the services Truckin 4 Troops offers. Now he considers many of those wounded veterans his family, and he and the organization look to help them any way they can.

Truckin 4 Troops earned well-deserved publicity from Governor Hogan’s proclamation, and with multiple other fundraising projects in the works, Truckin 4 Troops should continue to grow and provide veterans with even more services. One such event is the Bridge Ride 4 Heroes, a motorcycle ride across the Bay Bridge. Registration is $35 and the event is June 13.