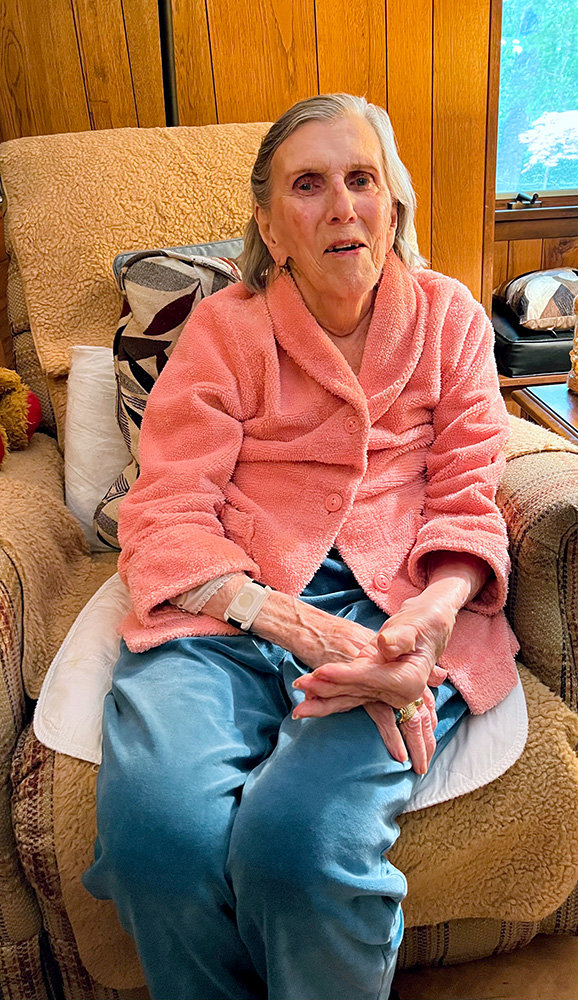 The average life expectancy of Americans is around 78.5 years, but Sally Dusinberre Laing, an Arnold resident since 1967 and soon-to-be centurion, is anything but average.

When asked about how she feels about reaching 100 years old, she quipped, “Accomplishment? I don’t know if it’s an accomplishment. It just happened!”

Born June 24, 1922, in Long Island, New York, this delightful woman packed plenty of adventures into her century on earth. From tickling the ivories with Liberace to drafting legislation to establish humane euthanasia for shelter animals, from working for a senator to spearheading an effort to institute health rooms in public schools, Sally has accomplished several lifetimes of good works.

After graduation from high school, Sally studied to become a nurse.

“I wanted to be a nurse since I was old enough to think about what I wanted to do with the rest of my life. It was just something in me; I don’t know where it came from, but I never wanted to do anything else,” Sally said. “So much is involved in giving good care to people; nurses must be well trained to be able to do something that is right for people. Care cannot be just ‘hit or miss.’”

Following Sally’s graduation from college, a friend suggested they join the military. Sally chose the Navy and her friend chose Army.

“I asked her, why would you want to join the Army? You know, join the Navy, see the world!” exclaimed Sally, but she soon learned that expression isn’t exactly true. “I joined the Navy and all I saw was Boston, Massachusetts, and Key West, Florida! I didn’t go to exotic places far away, but what I was doing was worthwhile and I was satisfied.”

She may not have seen the world, but she did meet a handsome young sailor while stationed in Florida. On a blind date, Sally met Joseph Laing, who was in Key West working on his sea trials.

“My friend said, ‘My boyfriend has a buddy who wants a date. Do you know anyone?’” Sally recalled. “That was a good pick because it was love at first sight.”

One year, they were at a piano bar in New York City and the piano player was trying to get someone to come onstage and play with him.

“No one would go up there, so I said to Joe, ‘Do you mind if I go up there and play with him?’” Sally said. “I mean it was embarrassing for him! I don’t know what was wrong with everyone.”

Though she claims to only “dust the piano keys,” Sally got onstage and played with none other than Liberace because she said she felt sorry for him!

Joe and Sally Laing moved to Howard County near Ellicott City in the early 1960s. It was then that she and a friend realized that there were no health rooms in public schools. The nurse in her kicked in and she initiated an effort to get health rooms in schools.

“Having a sick child sit in the principal’s office and tell them to be quiet while they wait for a parent to pick them is no way to treat them,” Sally said. “At first, the principal felt it was an ‘unnecessary expense.’ A couple of years of arguing and presenting that it was best for the child to have a proper setting to wait for parents, we won. The principal wasn’t happy, but he was sure glad to have the sick child out of his office.”

Some of Sally’s other adventures included working for Senator Jim Clark in the Maryland legislature, working at the nonprofit Partners In Care for many years, serving as a hospice volunteer for 30 years, being a garden volunteer at the William Paca House and a board member of the SPCA, including elected president.

As president, Sally was disturbed by the nature in which animals were destroyed at shelters. The animal lover then took up another important cause, the humane euthanasia of animals, which was signed into law by former Governor Harry Hughes.

Sally said that certain things were done during the process to do away with animals when they were sick — things she greatly disagreed with. She pushed for the legislation that required a humane euthanasia, which “made it much nicer for [animals].”

“If you care for animals, you want to be sure that they are handled gently and lovingly,” Sally said. “They are helpless little creatures. They need people and should have people around who care for them.”

She’s sorry she can no longer care for animals in her home but is thrilled when visitors come to call with a pet in tow. Additionally, her home is nestled in a park-like setting where raccoons, deer, turkeys and many bird species come to her back door.

Despite a lifetime of caring deeply for people and animals and having the courage and strength to advocate for what she believed was right even when it wasn’t always the most popular decision, Sally doesn’t believe she’s accomplished anything special.

“I don’t think I had an unusual life,” she said. “I lived a clean life, and I always did what I wanted to do.”

As for her advice for young people, she implored, “Take care of yourself, eat well, and get an education! Education is so important.

“Don’t endanger yourself, but don’t miss out on anything because you’re a ninny!” Sally said. “Now that I look back, I guess I did do a lot of things!”

Joe and Sally Laing have two daughters, Barbara in Chicago and Linda in Arnold.