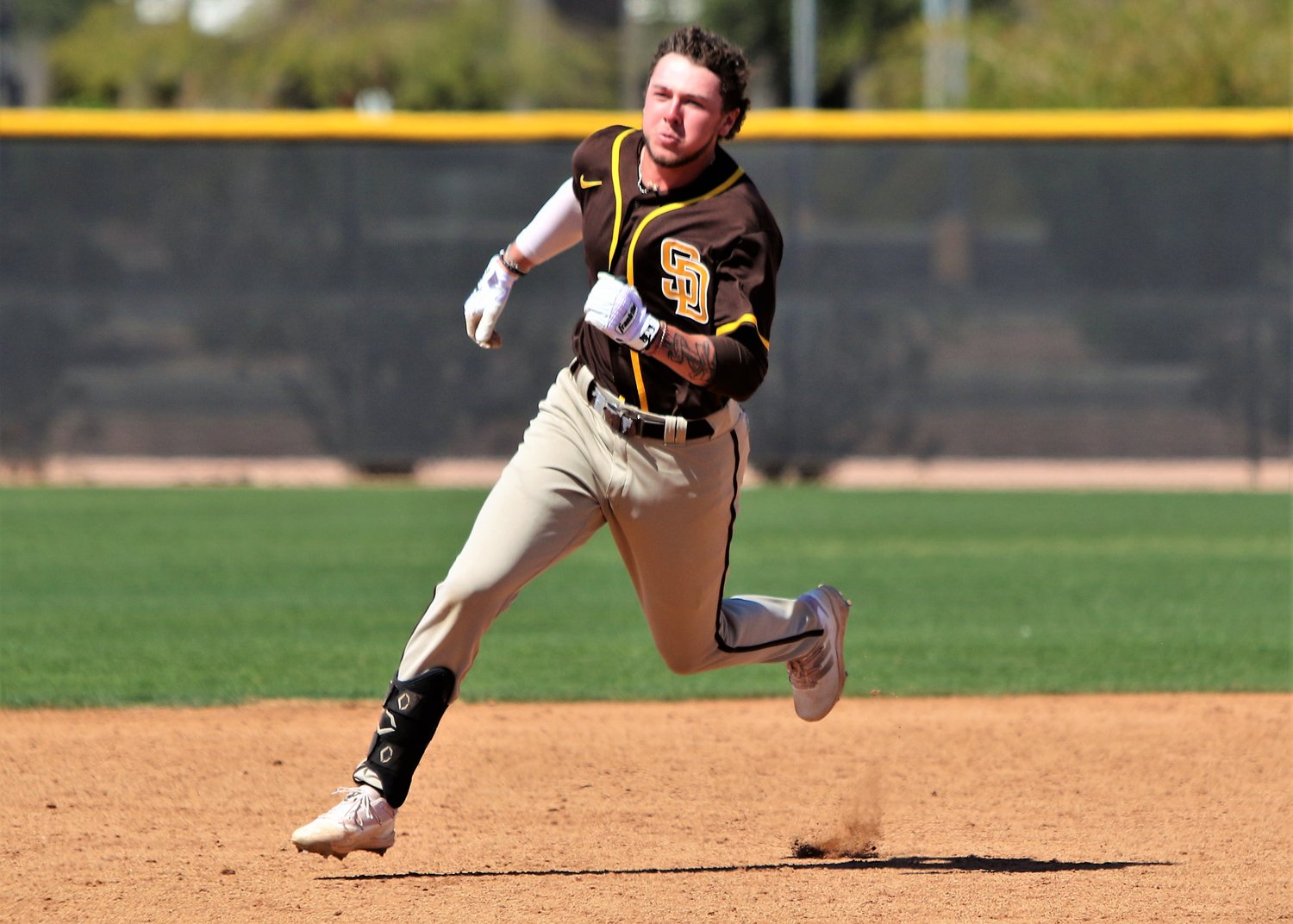 Merrill spent nearly all of the offseason at the Padres’ complex in Peoria. Because he is not on a 40-player roster, his offseason work was not impacted by the lockout.
PHOTO COURTESY OF JERRY ESPINOZA 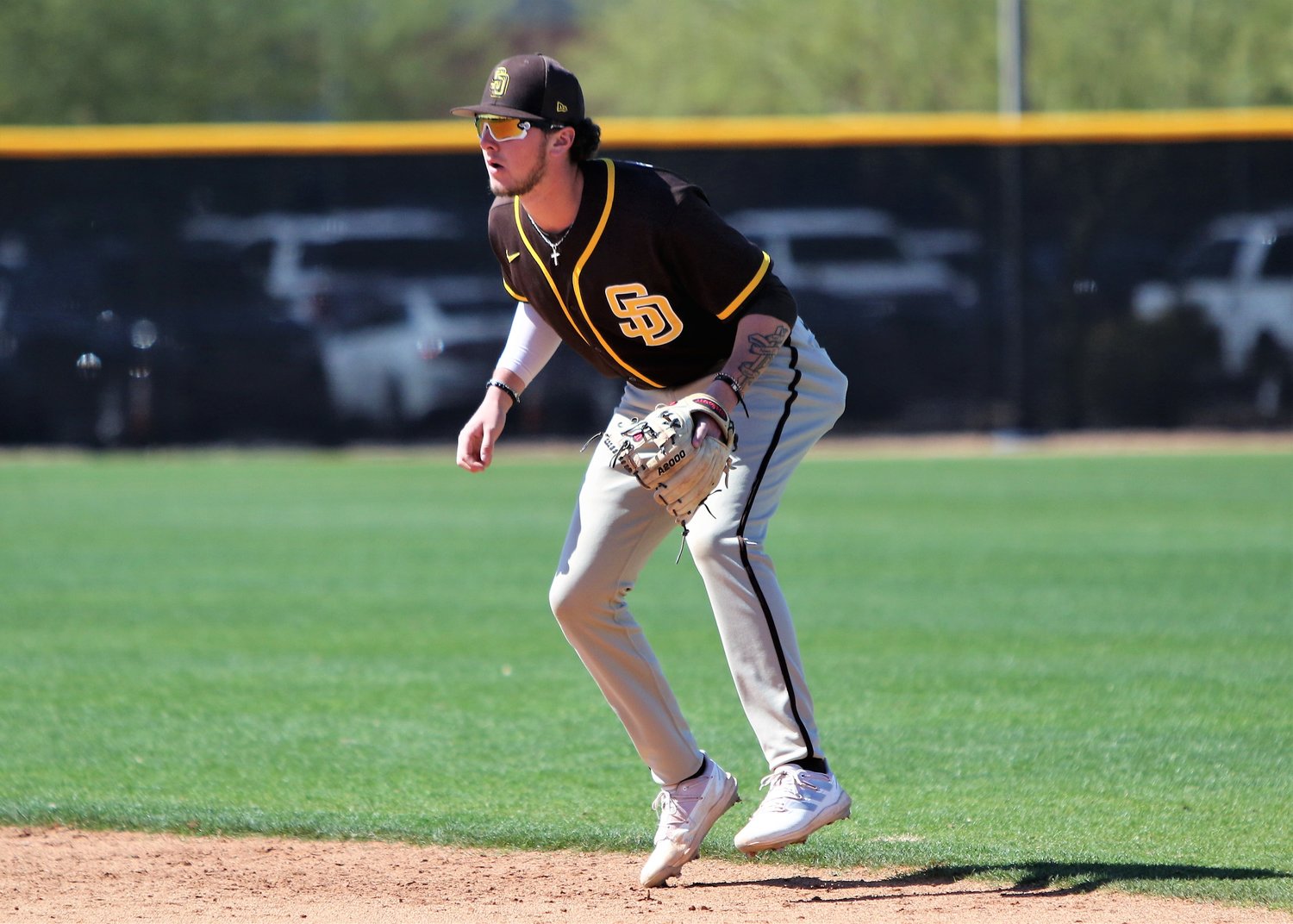 Merrill spent nearly all of the offseason at the Padres’ complex in Peoria. Because he is not on a 40-player roster, his offseason work was not impacted by the lockout.
PHOTO COURTESY OF JERRY ESPINOZA
Previous Next
Posted Tuesday, March 22, 2022 5:46 pm
By John Conniff

PEORIA, Ariz. — The San Diego Padres selected Severna Park High School shortstop Jackson Merrill last year, making him the first Marylander to be picked in the first round of the Major League Baseball draft since 2002. Merrill, whose draft stock improved substantially during his senior year, decided to forgo his scholarship to the University of Kentucky to start his professional career.

Like most prep players taken in the first round, Merrill compiled high school numbers that resembled something more from a PlayStation console than an actual playing field. He hit .500 in his senior year with 12 home runs and 37 RBI as he led Severna Park to the state championship game before losing 5-4 to Sherwood.

After being drafted by the Padres, Merrill signed relatively quickly and went into the furnace-like conditions of the Arizona Complex League in Phoenix, where he hit .280/.339/.383 over two months and 120 plate appearances.

For Merrill, just focusing on playing baseball after dealing with college recruiters and pro scouts was a relief.

“Obviously, not having classes and dealing with any school work is really helpful,” said Merrill on some of the changes in his life. “Just focusing on only baseball has made things much simpler.

“The best thing was the family that I made with the guys on my team,” Merrill said about his first year. “Coming in, I had no idea how things would be; they were all really good guys.”

Through his first 20 games as a professional, Merrill hit .338, but he faded late in the summer and a minor hip injury finally ended his season.

“The hardest thing for me was my mental game. Coming from where I did in high school, I didn’t’t fail a lot, but it was different and even humbled me.”

Merrill believes he will be better prepared for struggles in the coming year.

“Don’t expect failure, but don’t be surprised by it,” he said. “Get up the next day and keep grinding.”

Mark Conner, who headed amateur scouting at the time and now is the Padres’ minor league field coordinator, discussed the decision to take Merrill.

“Our guys did some work early in the preseason when he was practicing to get around him,” Conner said after the draft. “From game one, we started flooding the looks, and most of our staff got a chance to get in there even though it was a short year.”

The one thing that did become apparent to the Padres pretty quickly after signing him is that Jackson really likes baseball.

“He has a good head on his shoulders, and when you talk to him, you can see how much he loves the game and learning about the game,” said Eric Junge, who will manage the Low-A Lake Elsinore Storm, where Merrill will likely open the 2022 season.

“I’m a former pitcher, and he enjoys telling me about the base running aspects, infield defense, and it’s already been an exciting give and take.”

Merrill, who seems to think that hours in the day were created to get better at the game, has fully embraced his new life and spent nearly all of the offseason at the Padres’ complex in Peoria. Because he is not on a 40-player roster, his offseason work was not impacted by the lockout.

“I loved it out here, nice and warm. I could get my ground balls in, and the weight room is perfect; I could do anything there.

“It was much more baseball-type training than when I lifted myself, like a bodybuilder. Here they have me doing more explosive exercises that I can feel when I am out in the field.”

Look for the full story in the April edition of the Severna Park Voice.

John Conniff is the publisher of MadFriars, an independent media outlet that covers the Padres' minor league system.

The Chartridge Swim Club Is Back In Action