Let’s Go To The Movies… 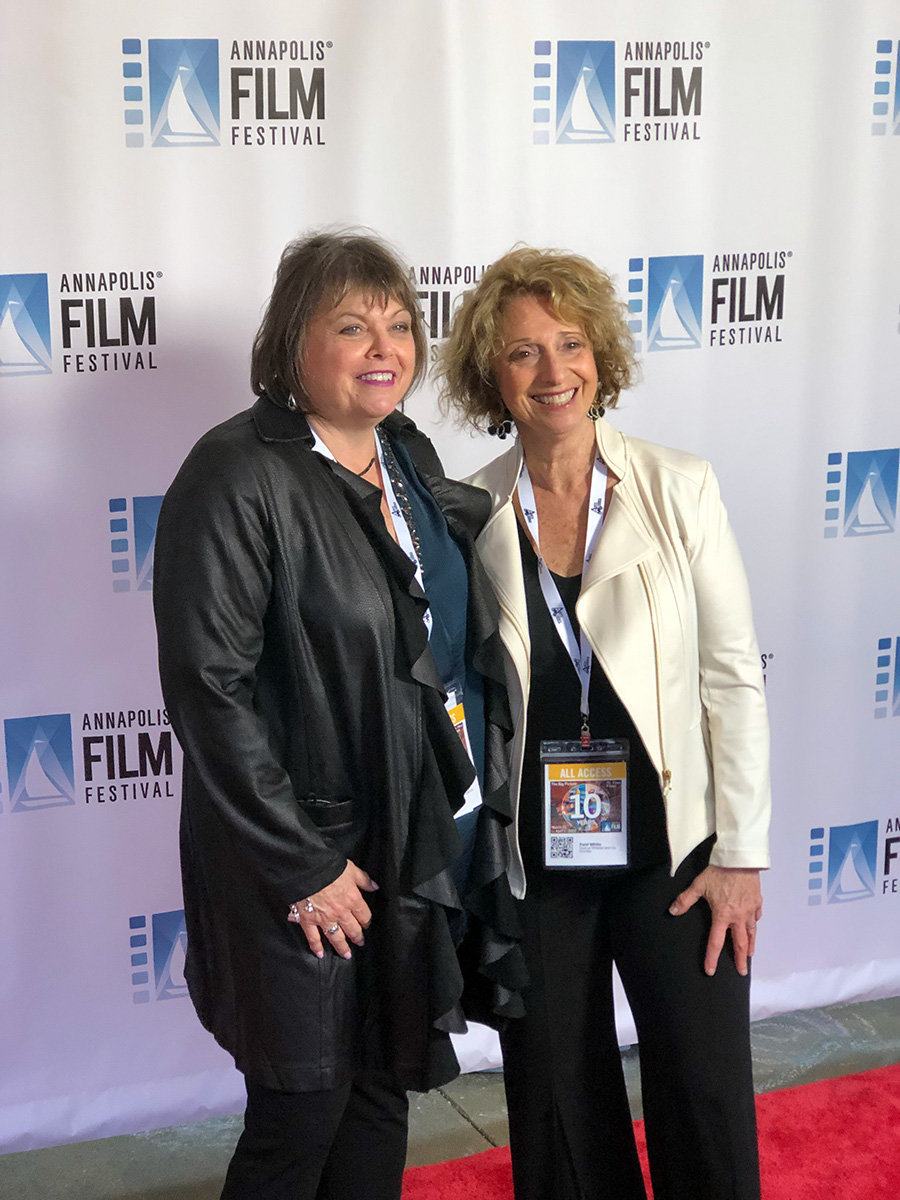 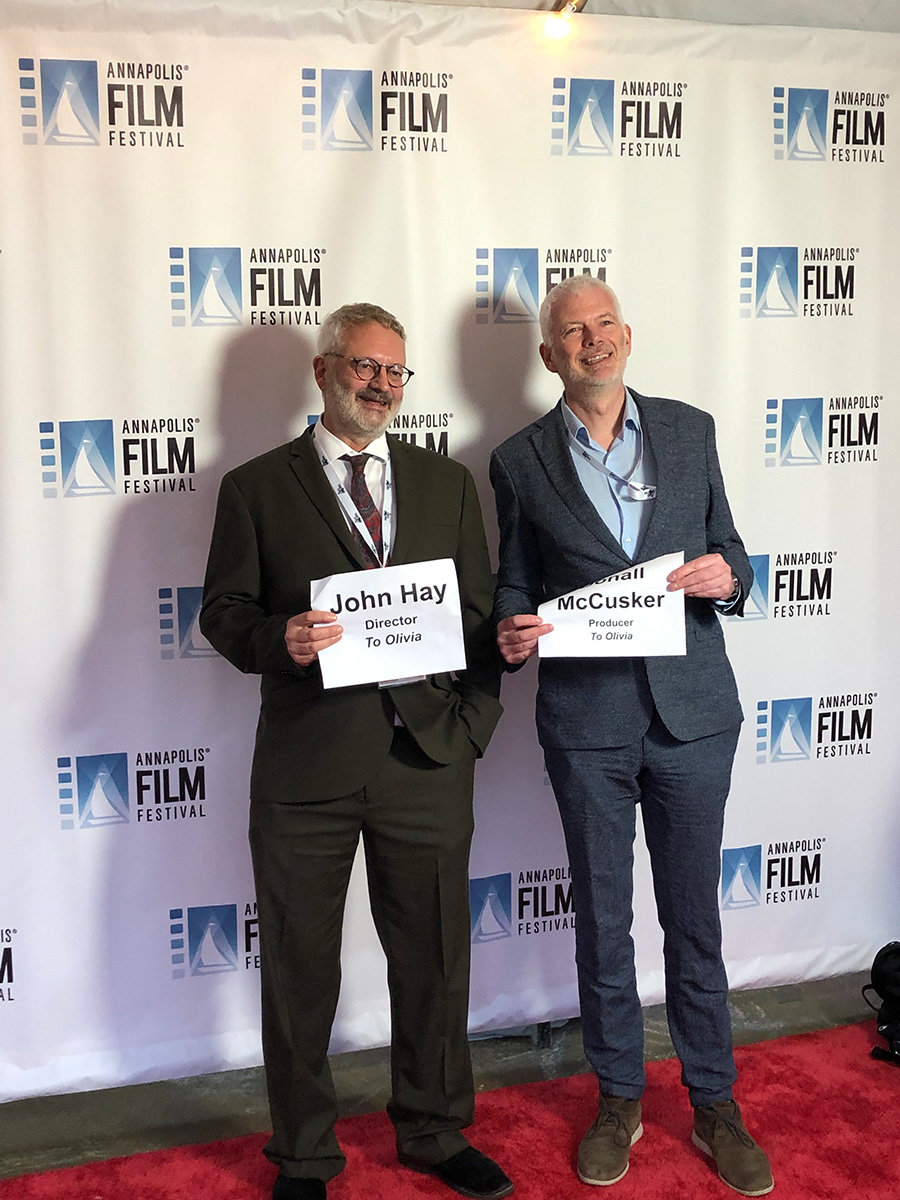 "To Olivia" director John Hay and producer Donall McCusker goofed around with their identifying signs.
Photos by Lauren Burke Meyer 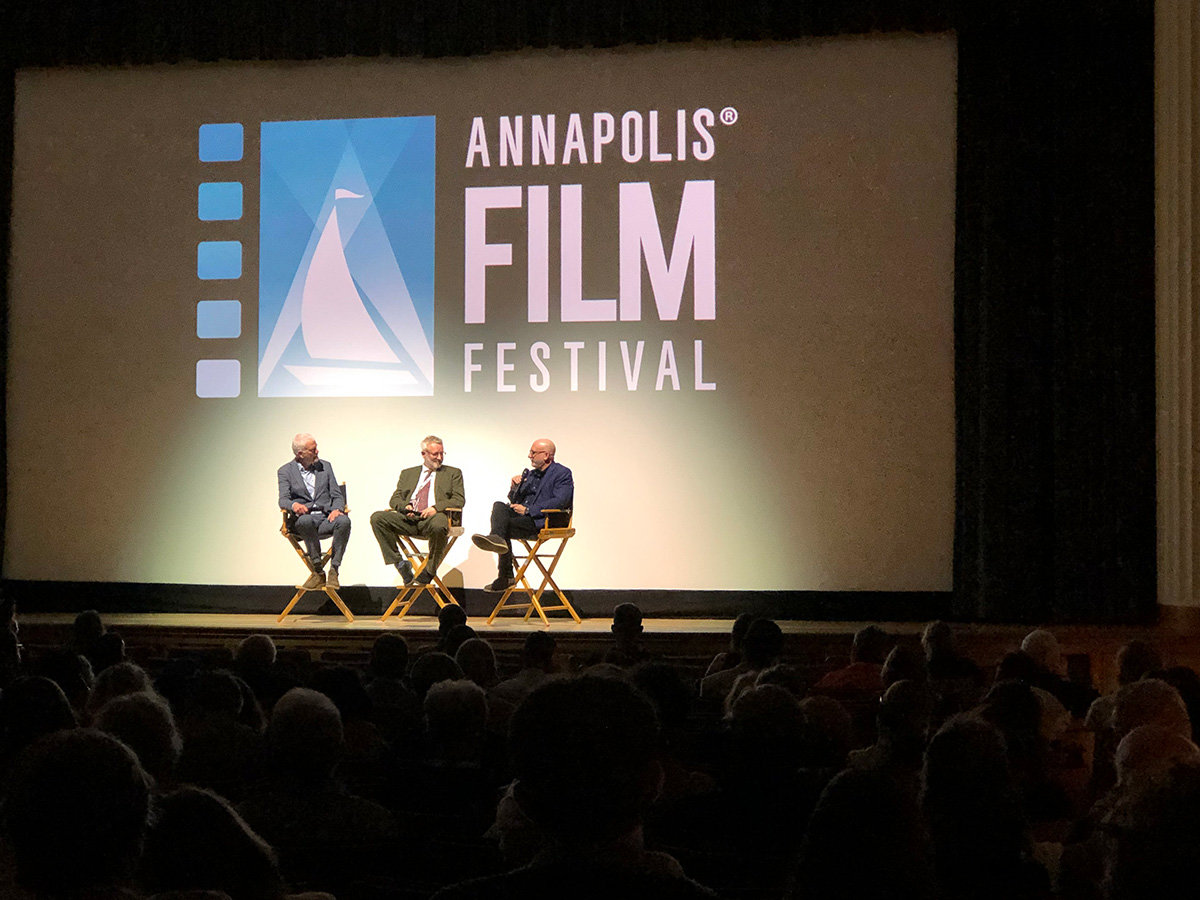 I haven’t seen a movie in a theater or group setting outside my home since February 2020. To say I was anticipating — like many others — the Annapolis Film Festival (AFF) is an obvious statement. What’s not obvious is the unbelievable electricity radiating throughout the opening night festivities on March 31 after two years of back-to-back virtual festivals. Emotions were strong with it being the AFF’s 10th anniversary.

In a joint statement, AFF co-founders and directors Patti White and Lee Anderson said, “Celebrating year 10 is so meaningful to us. We faced the ‘naysayers,’ the ‘doom and gloomers’ and even the ‘what festival?’ crowd. But the smiling faces, crowded theaters and festival fans over the years have warmed our hearts and given us the fuel to carry on and continue to bring you the freshest films, both independent and commercial, homegrown and foreign, and all the side activities such as industry panels, the shorts challenge for emerging filmmakers and our specialty showcases that we are known for.”

For those unable to attend or to the lucky ones that just want to relive the movie magic, here is an inside look at all the opening night festivities held at Maryland Hall.

The pre-party was exclusive to VIPs including premium, gold sponsor and industry passholders, which included mostly donors and filmmakers. A front lawn tent was the hub for both parties complete with Tito's Handmade Vodka, Coppola wines, Rabbit Hole bourbon and Annapolis' own Forward Brewing from beverage sponsors. The Naptown Girl Crush band warmed this crowd up during a brisk early evening.

Tiny tea sandwiches with miniature Union Jack flags and deviled eggs were in abundance as a nod to the opening night film’s setting in the English countryside.

Following the pre-party, old Hollywood glamor was in full effect with a red-carpet step and repeat, where the opening night film “To Olivia” director John Hay and producer Donall McCusker were all smiles. Demonstrating classic British humor, the gentlemen playfully held up their identifying name signs while being photographed before ditching the behind-the-scenes identifiers for slightly more serious photos.

Based on Stephen Michael Shearer’s biography entitled “An Unquiet Life,” the drama takes place in the 1960s. The couple and their children’s lives are marred by tragedy when their 7-year-old daughter Olivia dies from measles encephalitis. A vaccine had not yet been developed in 1962, but afterward the couple became passionate vaccination advocates. The shell-shocked couple grieve in their own ways as their marriage nearly falls apart. But eventually through the power of unconditional love and uncompromising creativity, they find the strength to accomplish their greatest artistic achievements: Dahl writing “Charlie and the Chocolate Factory” and Neal starring in the movie “Hud” with Paul Newman and winning the Academy Award for Best Actress.

“We’re trying to share stories that have some glimmer of hope in them,” Anderson said. “So even though this was a story about grief and loss, look what good came out of it for both of them. It was a small slice of a well-known story.”

There were two firsts for Hay. One being the first time at the Annapolis Film Festival, and two, the director had never seen the film with an audience. Filming ended in December 2019 and post-production was done via laptops due to COVID-19 protocols.

When asked about the COVID-19 timing and the deeper meaning behind the measles vaccine and modern-day vaccine resistance, while on the red carpet, Hay replied, “It was a coincidence … The timing was bizarre. We really wanted to make the film with the lens of today to make it feel relevant.”

After remarks from AFF president Emil Gallina, Annapolis mayor Gavin Buckley gave a warm introduction, saying, “We love you Patti and Lee!” Both White and Anderson made their entrance to a packed theater of an approximately 600-person audience and standing ovation.

Per Anderson’s request, all the volunteers, donors and staff stood up. Roughly 250 volunteers participated in this year’s Annapolis Film Festival.

It wasn’t long before the film began to roll that laughter ensued. Following the film, Joe Neumaier — a former critic for the New York Daily News — moderated a Q&A with Hay and McCusker. Hay shared how he had a personal connection to the story, losing his own sister at a young age. The audience also learned that the film was shot in 25 days and in November, the month that Olivia had died.

“If anything you can take away from me, it should be how we come to terms with the death of those we love, and how we can use that to move on and still respect their memory,” Hay said.

U.S. distribution of “To Olivia” is in discussion and the film is due for a spring or summer release date.

In keeping with the British theme, the afterparty honored Dahl’s books – “Charlie and the Chocolate Factory” and “James and the Giant Peach,” with a British-themed menu of savory dishes along with chocolates and sweet treats such as a three-tiered chocolate cake, presented by Annapolis’ own Palate Pleasers.

One of the true highlights of the evening was when the band For the Road played. After such a grim two years with COVID-19, it was incredible to see all types of people with different backgrounds brought together in celebration of film. White and Anderson previously shared with me the importance of diversity from day one at the AFF, diversity of films and attendees. Ten years later, this mission stands strong.

“We felt supported and embraced by the community last night, and we’re grateful for that,” Anderson said. “We didn’t know if people would show up in a post-COVID world – and they did. We built it, and they came back. That’s very reassuring in terms of being able to continue to do this again and continue to get the kind of support that’s required.”