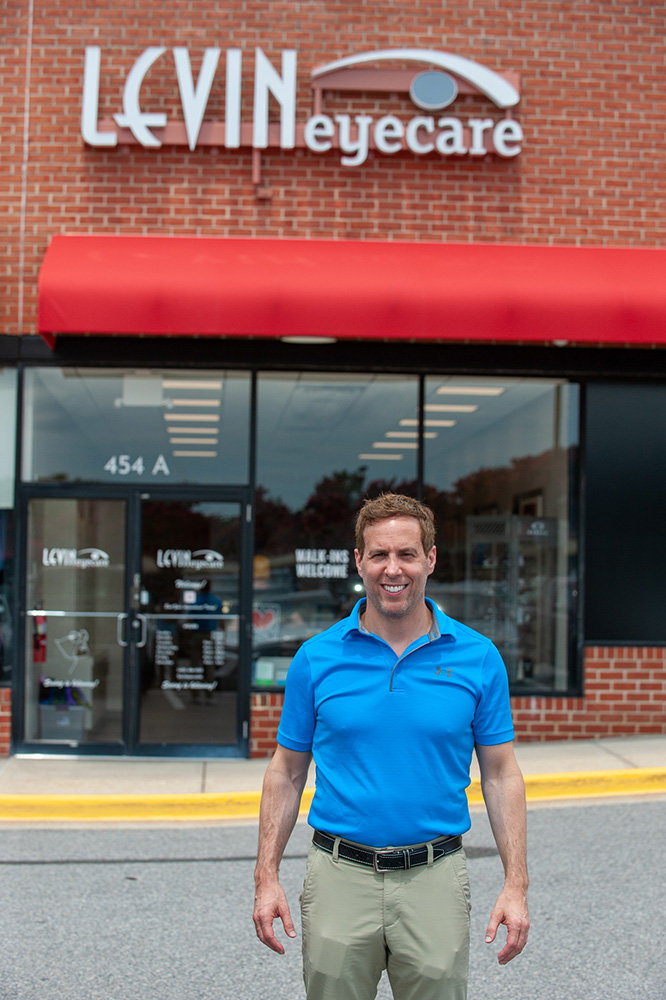 Dr. Richard Levin, CEO of Levin Eyecare, is happy to expand his company into a community that has strong family values.
Photos by Zach Sparks 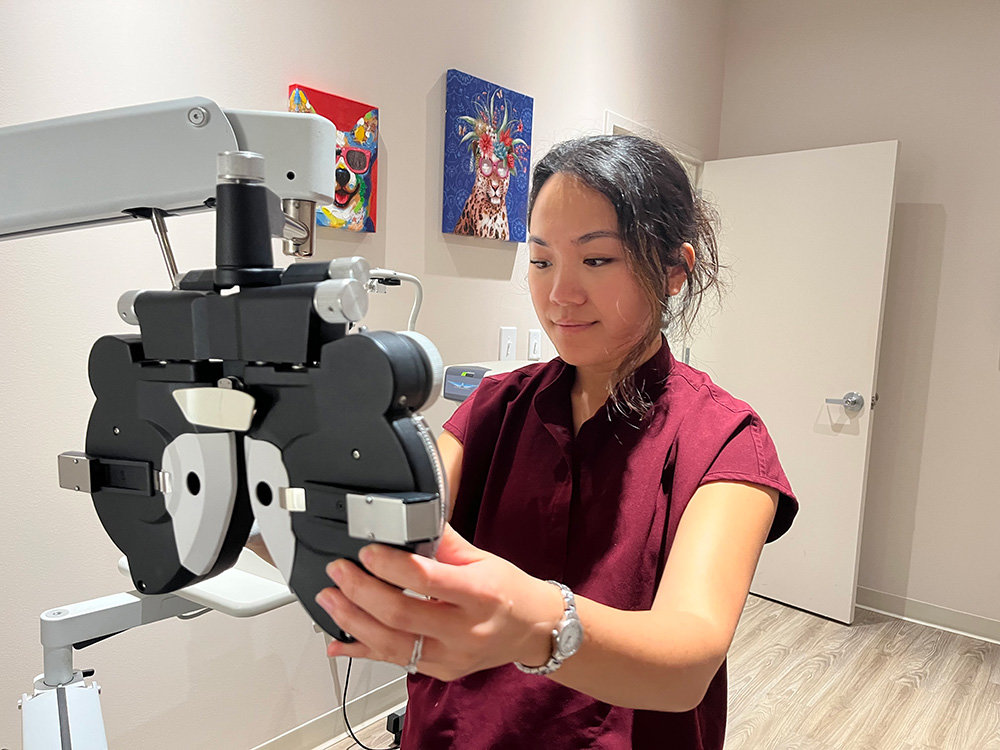 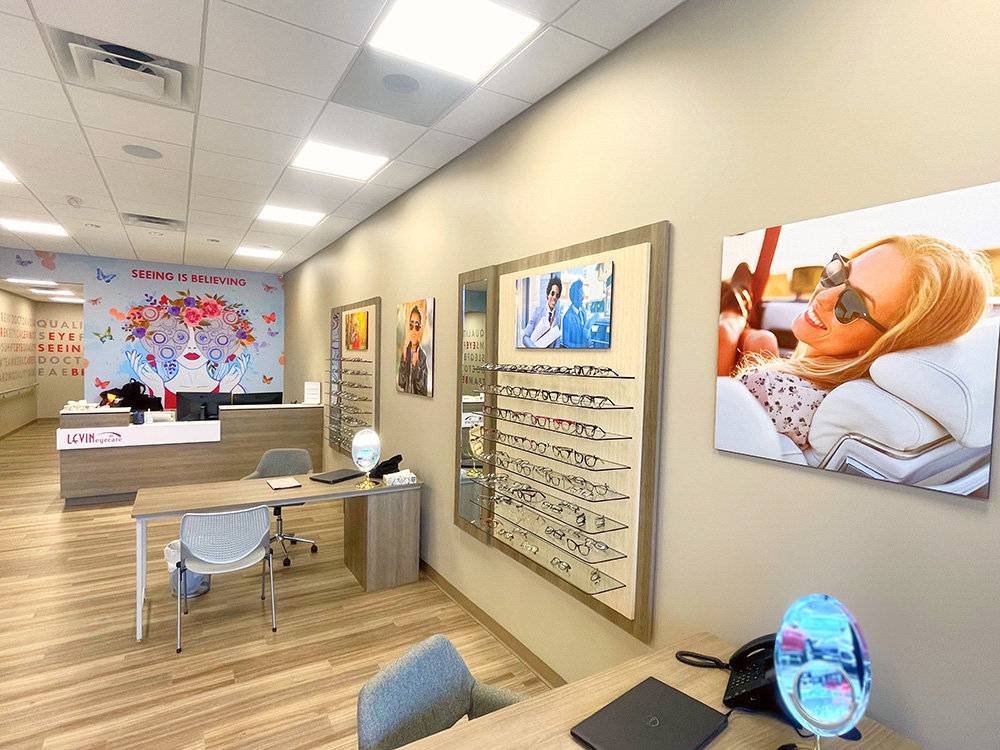 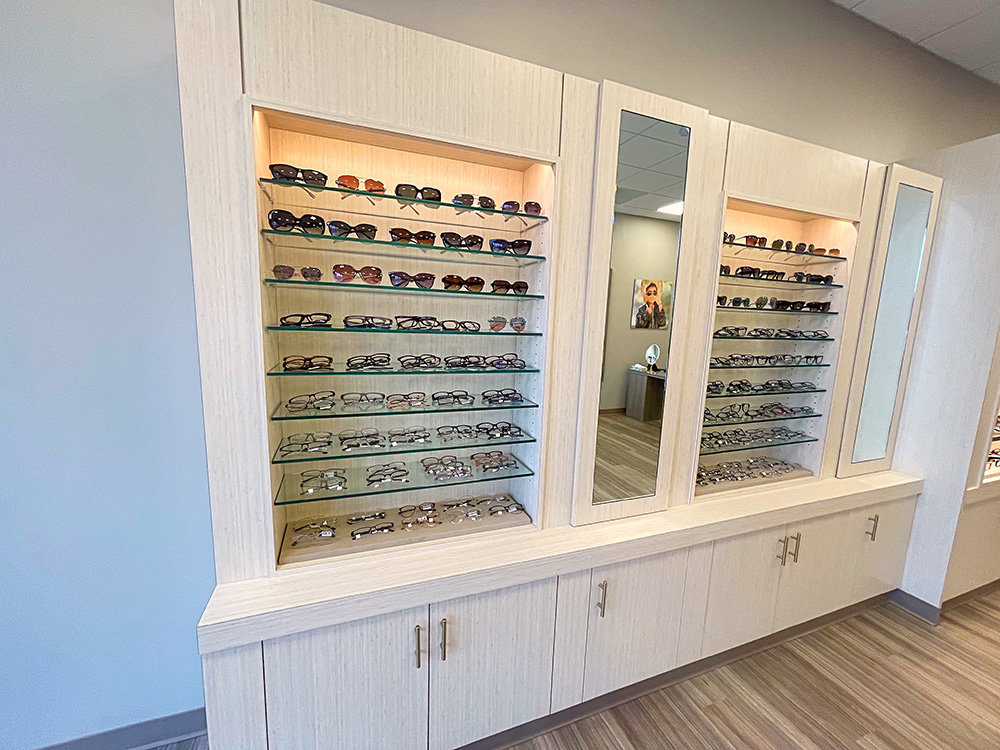 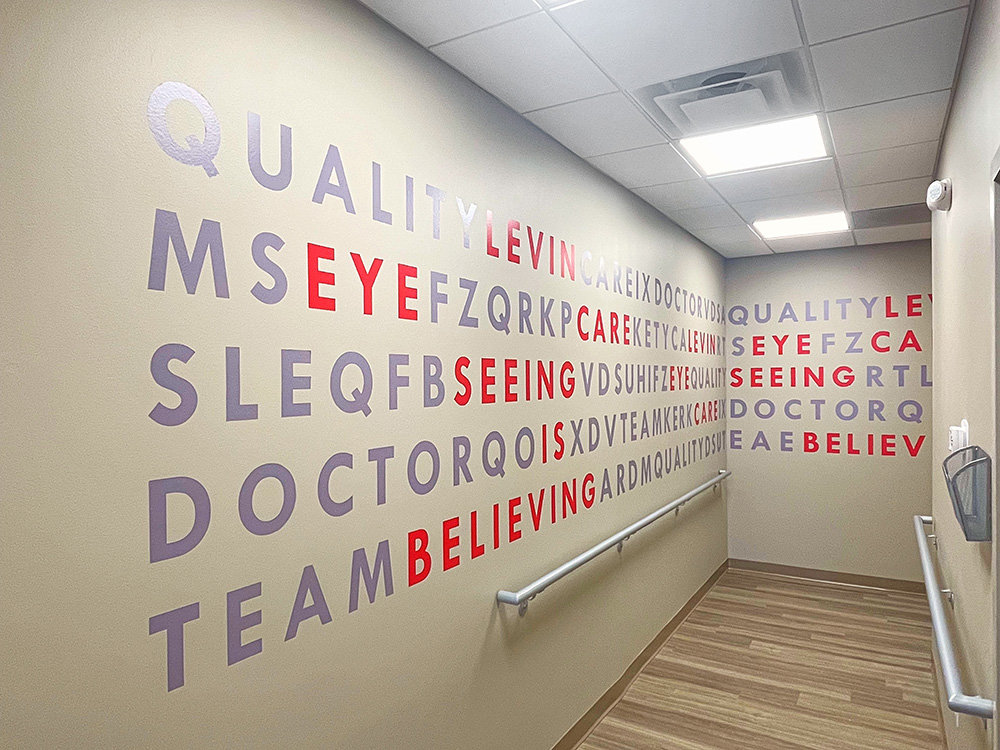 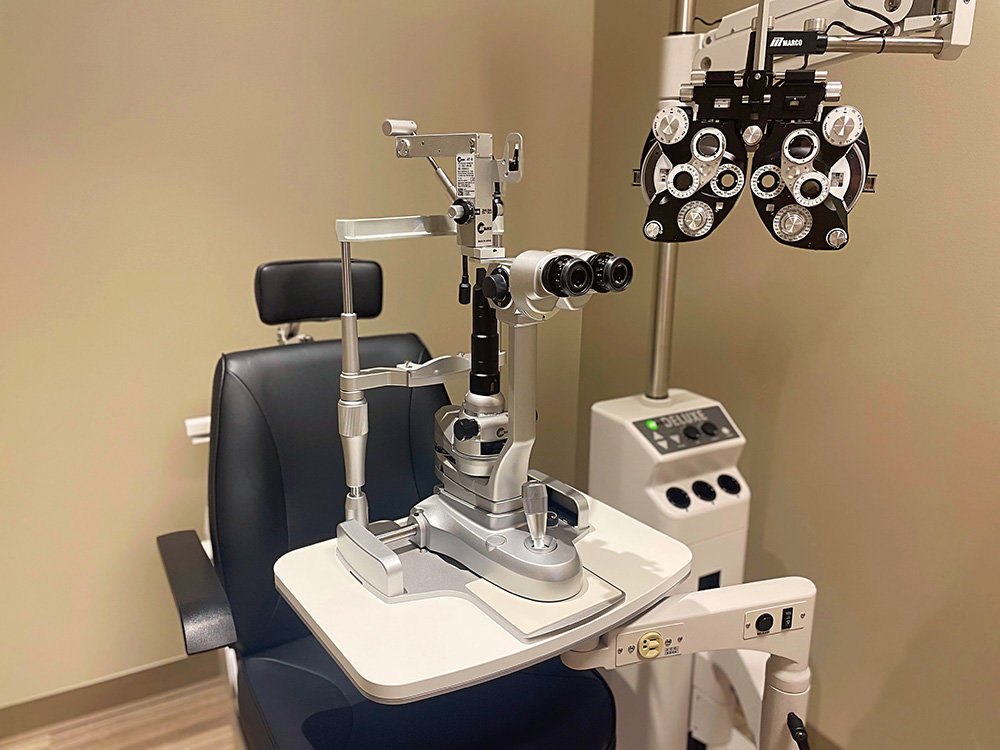 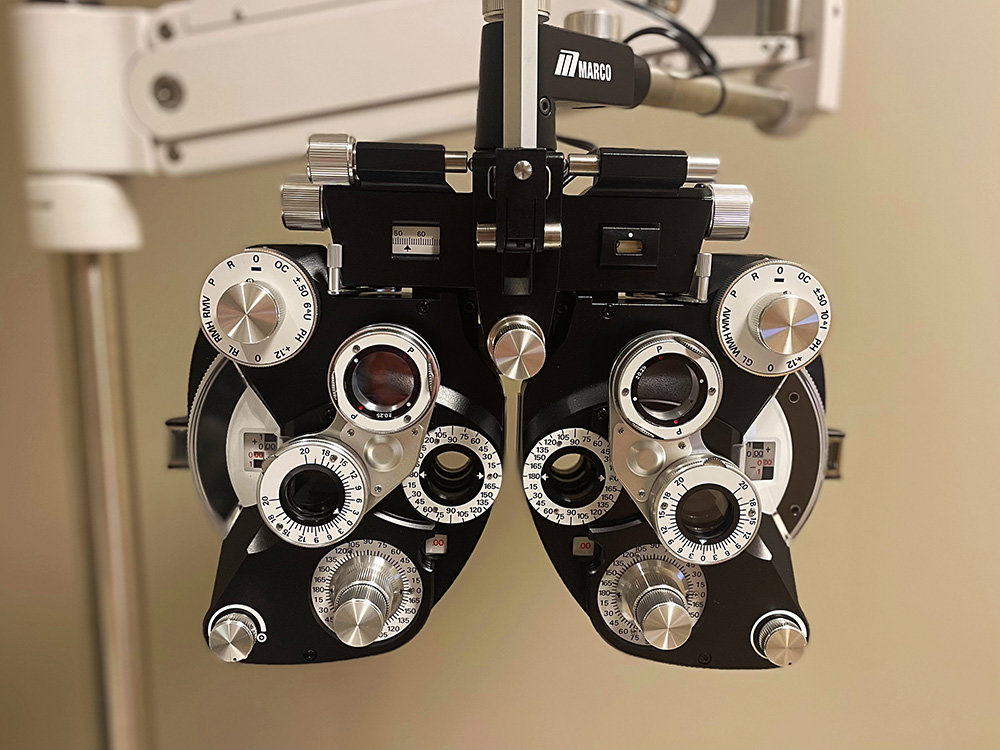 When Levin Eyecare opened in the Robinson Crossing shopping center in April, Severna Park residents may have recognized the Levin name, known for its reputation for helping patients see better.

But beyond its comprehensive medical, surgical and routine vision services, Levin Eyecare is known for something else that makes it an ideal addition to Severna Park.

“A lot of businesses in Severna Park are family oriented, with an emphasis on family values, which is the core of our company,” said Dr. Richard Levin, CEO of Levin Eyecare. “We knew we would fit in quickly.”

Customers at Levin Eyecare are treated like family, a practice that has been important to Richard and his father, Howard Levin, since they formed Levin Eyecare in 2006. Richard remembers growing up and learning about patients who became friends with his father, who began practicing optometry in 1972.

“A big thing I remember in middle school and high school was sitting around the kitchen table and hearing stories about patients and the events in their lives — the weddings, the anniversaries, the milestones,” Richard said. “We were ingrained in that.”

At Levin Eyecare’s newest location in Severna Park, optometrist Sarice Lui hopes to build relationships while helping patients enhance their vision and overall health. It’s important to her to provide the best patient experience in an environment that is warm and welcoming.

“Going to the doctor’s office is a scary thing and you have to put your trust in your doctor, so it’s important that you feel comfortable and that we have a clean space,” Lui said. “My big thing is not only examining someone’s eyes but making sure they’re comfortable with the care they got with each exam.”

Lui focuses on glasses, contact lenses, and the management of dry eye and other problems. If patients have glaucoma or retinal issues, she can refer them to specialists.

A Rockville native, Lui previously worked at the United States Department of Veterans Affairs, where she was able to help veterans struggling with a variety of eye issues.

She studied history at the University of Maryland, Baltimore County, and worked as an optometric technician, and went back to school for science classes. Lui was part of the Accelerated Scholars program at Salus University, Pennsylvania College of Optometry and received her Doctorate of Optometry degree in 2021.

“It gave me a different perspective, so I knew how the front of the office works,” she said when asked about being a technician. “I knew this is what I wanted to do. You have to communicate very well.”

Richard Levin said that positive communication starts with the Levin culture, treating employees well internally so they are passionate about providing the best care. As long as Levin keeps that as a focus, the team will never lose its personal touch.

“It’s about the small details: saying hi to every patient, being nice and friendly, and knowing their names,” said David Lloyd, marketing coordinator for Levin Eyecare. “We don’t allow ourselves to get too big.”

The team also stays humble through its philanthropic work.

“We help people who have no access to care. It’s almost like visiting a third-world country where people have no access,” Richard said. “It keeps you grounded as a provider. You think your day sucks? No, it doesn’t seem so bad when you see the challenges these people are facing.”

Through that work and by helping each patient, Levin Eyecare strives to make a difference.

“You can always beat the big brands when you’re in the community and you have that support,” Richard said of his approach.

For eyeglasses, Levin has more than 500 brands and styles from Nike to Michael Kors. Levin Eyecare offers the latest in lens technology including aspheric lenses, ultralight polycarbonate, and progressive no-line bifocals.

Levin also offers Under Armour eyewear and a variety of sunglasses from Oakley, Maui Jim, Ray-Ban and others.

Levin Eyecare is located at 454-A Ritchie Highway in Severna Park. To make an appointment, call 410-432-2332 or visit www.levineye.com.

“We meet your price point and your fashion,” Richard Levin said. “Regardless of who you are, you will be treated like $1 million.”

Has The COVID-19 Pandemic Impacted Your Child’s Development?

How To Protect Your Child From Drowning

Financial Fitness – Is It Time For A Mortgage Checkup?