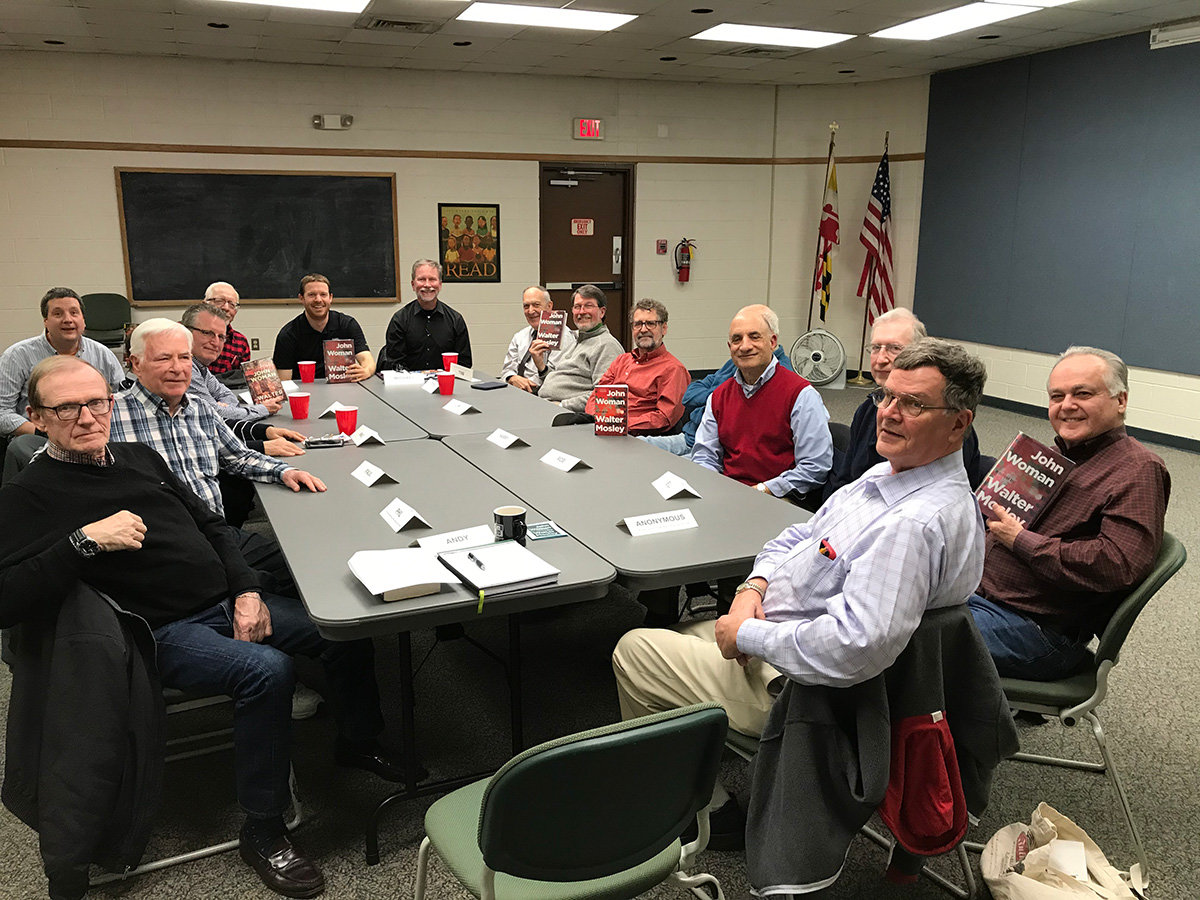 The Guys Book Club, pictured in one of the last meetings before the pandemic, is hosted by the Severna Park Library but is currently operating virtually.
Photo Provided
Posted Tuesday, May 4, 2021 5:02 pm
By Haley Weisgerber

Anne Arundel County Public Library has a variety of clubs for people of all interests and backgrounds. At the Severna Park Library, librarian Andy Wolverton coordinates a monthly Guys Book Club for men to gather with other readers and create lasting friendships.

“My main goal was just to let guys know that reading is fun, and we should get together and talk about it,” said Wolverton. “And it's been wonderful beyond my wildest dreams.”

Wolverton started the club almost 10 years ago, after he found himself striking up conversations with men who were checking out books at the library. He spread the word about the club the same way he was inspired, by word of mouth.

“I talked to every guy that walked into the library,” Wolverton said. “I told them, ‘Look, we're starting a book club for guys. And here's what we're going to do.’”

Club members have read a variety of books ranging from historical fiction, to science fiction and even the occasional Jane Austen novel. Wolverton had a system up for voting on the next book, but he has been picking the novel since the beginning of the pandemic.

Wolverton wants the group members to share their opinions, regardless of whether or not the rest of the group agrees.

“We might disagree on a certain book, or our opinions about a certain book, but all opinions are valid,” said Wolverton. “And everyone should be listened to, with equal respect, which hasn't been a problem in our club.”

The club is currently operating over Zoom. Although there were mixed opinions about the format in the beginning, Wolverton said that many of the members have tuned in this year. Men have even joined from other states or counties.

“One of the things that I'm talking with my branch manager about is when we finally do go back to in-person meetings, continuing to do the virtual meetings,” said Wolverton. “Then guys could choose. [The meetings] would probably be on different days and if somebody couldn't make the in-person meeting, maybe they could make the Zoom meeting.”

About 12 to 18 men join each meeting. Wolverton said that is generally a good number for the group. Anything over 25 people can make participating in conversation difficult.

“One of the things that I stress is that I really don't want anybody just sitting there, unless they just don't want to participate, and that's fine, but I do like for everybody to participate,” said Wolverton.

The group is open to teenagers and adults, as some of the content can be mature. Wolverton said that most of the group is middle-aged.

“I wish I could get some more young people to come, and we were always working on that,” said Wolverton. “I always tell the guys to tell their sons, grandsons, nephews. They're welcome anytime.”

Wolverton said he has made lasting friendships. Before the pandemic, the men would frequently get together outside of the monthly meetings. But the most important thing, according to Wolverton, is that the club is encouraging men to read.

“I would love for guys of all ages to read more,” said Wolverton. “It's mainly just to get people interested in reading and just having a discussion about books and just realizing this can be fun.”

To learn more about the Guys Book Club, call the Severna Park Library at 410-222-6290 or reach out to Wolverton at awolverton@aacpl.net.

“When I talked to those guys in the library early on, they would say that they don't like to be part of a group, and that's OK,” said Wolverton. “But I would tell them to come to one meeting. If they don’t like it, they only wasted one evening. If they do like it, they keep coming back.”

The Guys Book Club, pictured in one of the last meetings before the pandemic, is hosted by the Severna Park Library but is currently operating virtually.