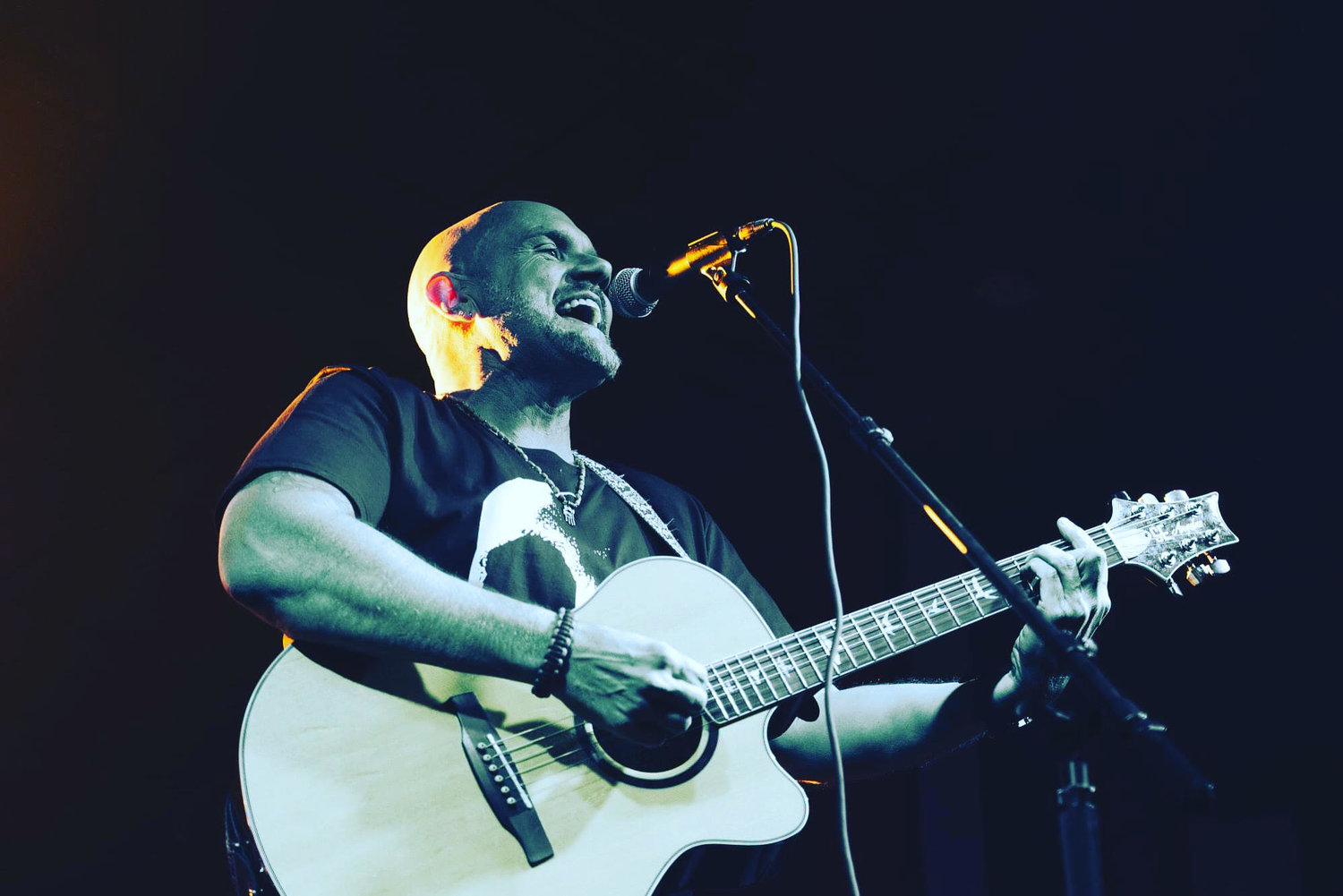 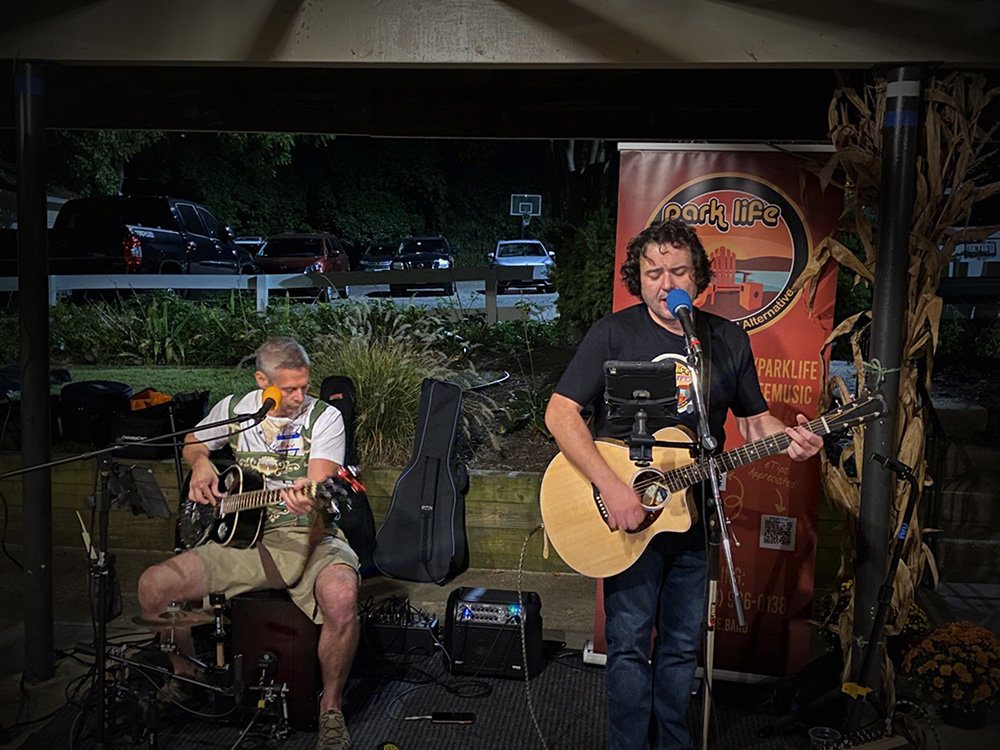 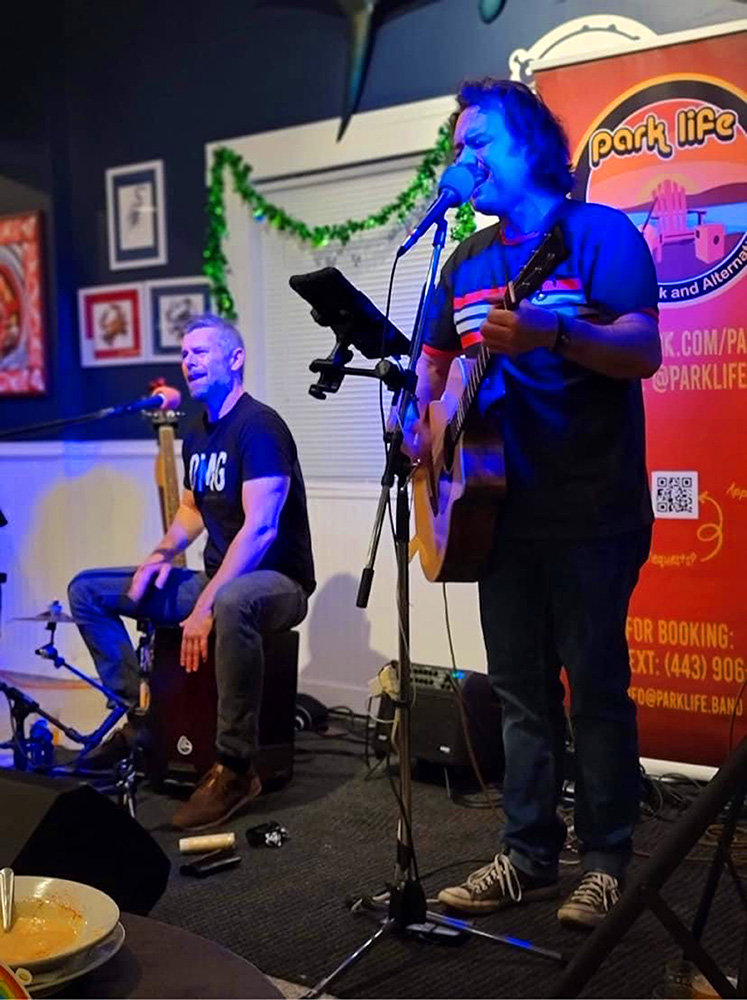 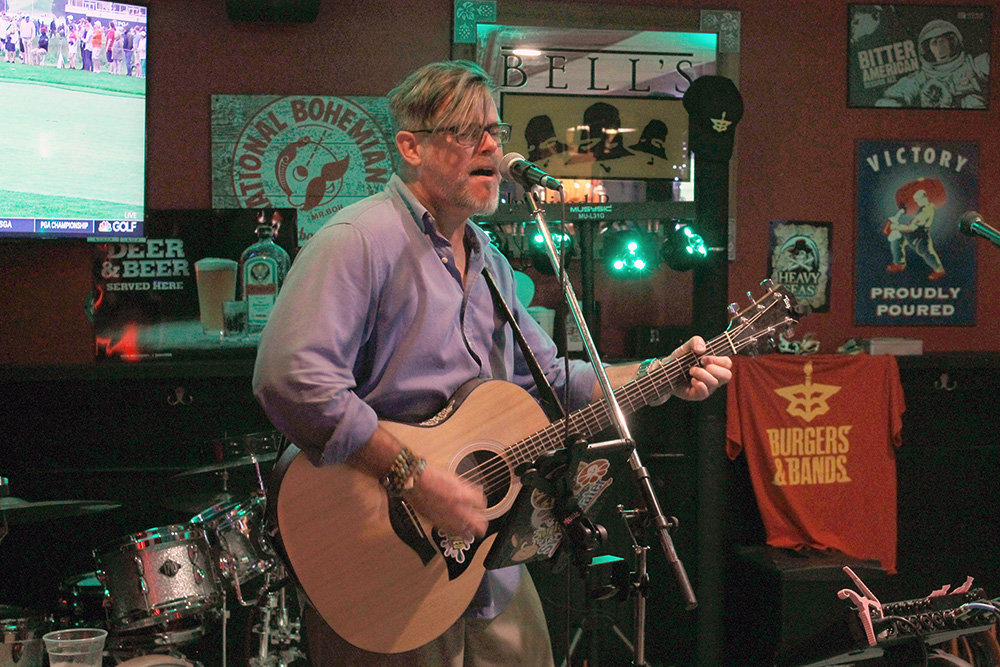 George Evans is a regular performer at Burgers & Bands at Severna Park Taphouse, among other venues.
File Photo
Previous Next
Posted Tuesday, June 28, 2022 8:52 am
By Judy Tacyn

For musicians and those who love live music, Anne Arundel County, and specifically Severna Park, is filled with great options covering the spectrum of musical styles and genres. In popular spots like Brian Boru Irish Restaurant, Sullivan’s Cove, Severna Park Taphouse, Mother’s Peninsula Grille, Garry’s Grill and so many more, talented local musicians entertain guests every night of the week.

For Park Life duo Joe Comer and Ray Gauss, music is a relaxing escape from their overly analytical professions. Comer is a physicist and Gauss is C-suite technology executive.

“Performing scratches a different part of my brain,” Comer said.

Park Life came about in 2016 as a couple of West Severna Park guys wanting to play acoustic music on the beach. Though they had been in bands before, the flexibility of having a community band was perfect for these two working professionals with young families.

Comer said that during the pandemic, small outdoor opportunities really started to pop up. “It’s real easy for two guys to unpack and play under a tent,” said Comer, who added that the duo prefers modern rock “before rock got angry. The songs are some that everyone knows the words and can sing along.”

Dave Tieff, the frontman for Laughing Colors, started to play more house concerts and private parties during COVID, something he called “one of the silver linings” of the pandemic. He’s also been inspired to write his own music lately. He has his weekends booked with gigs and is an online businessman during the week. He grew up a Broadneck Bruin but has called Severna Park home for the last decade.

“Most people know me from the band Laughing Colors, and we started way back in 1991. I went to high school with Corey Hall, the guitar player, and Dan Welsh, the bass player, who are also Broadneck alums,” Tieff said. “We set out to conquer the world [after high school] — or at least Anne Arundel County — shortly thereafter.”

George Evans started as a drummer in 1984, playing heavier music like Metallica, before studying classical guitar in college. Along his music journey, he picked up bass guitar and saxophone. He now plays solo gigs and as part of a duo and a band.

“The singing has developed over the last eight to 10 years as I’ve had to become more reliant on playing solo,” he said.

Comer and Gauss love being able to come into a gig with a general idea of what they are going to play, but then allow the crowd to respond and interact, saying the vibe with an engaged audience is a feeling like none other. In addition to Severna Park spots, the duo also like the Rumor Reel in Pasadena, the vibe of playing dock bars, and gigs on the Eastern Shore.

Laughing Colors loves to play The Recher theater in Baltimore, Rams Head Live! and Pier Six Pavilion, the 9:30 Club, and Rams Head On Stage in Annapolis, to name a few.

When he’s playing with Laughing Colors, Tieff said, “It’s all about the high energy, and I love that. It’s loud guitars and drums and bass and organized chaos. When I play solo, it’s more mellow, and I do everything at my own pace, which can also be very rewarding.”

Whether that’s with the full band or him playing solo, Tieff said he’s always felt extremely blessed to be able to do what he truly loves to do. “I love to entertain people,” the guitar-player frontman said. “I love to see them dance or sing or move or get smiles on their faces when they hear music.”

Park Life has performed with Burgers & Bands, the Severna Park based fundraiser for suicide prevention held at Severna Park Taphouse, for several years, an event they said they thoroughly enjoy.

“It’s so great to perform in such an intimate setting,” said Comer, speaking of the inside acoustic stage at the Taphouse. “It’s also great to be able to hang out with so many great musicians that we ordinarily wouldn’t be able to see perform. It’s an all-day event, so we can sit down with other musicians and have some great conversations.”

Evans is also a regular at Burgers & Bands at Severna Park Taphouse. He also performs at Sullivan’s Cove in Severna Park, Beefalo Bob’s in Pasadena, Sunset Back Bar in Glen Burnie and he gets recruited for private parties. As for his go-to songs, he likes to perform the original tune “Adrian” and covers including “Danny’s Song” by Loggins and Messina, and anything by The Doors, Dave Matthews Band, Foo Fighters, and many other tunes.

He is always incorporating new songs into his set to keep the audience engaged and to perform different songs at different venues.

“A bar that has an older crowd, you probably want to play classic rock,” he said. “If you play some Pearl Jam, you might lose them.”

Adding more layers of excitement to his shows, Evans likes to make concert posters with original artwork and also give young musicians the chance to open for him so they get needed experience.

“It’s a competitive market, but you need to stay friendly,” Evans said. “It’s good to have a scene you can be a part of, and this scene has sprung a lot of side projects. It’s fun to see these other artists start to develop.”

For people who play music and people who love music, the Annapolis area is a rare gem, Tieff said.

“You’d have to travel far to find such a closely knit community of people who truly love music,” Tieff said. “There are tons of extremely talented musicians, many of whom I’ve been blessed to play with over the years.”

From community beaches to Pier Six, for these local musicians performing all comes down to the energy created with a live audience.

“Playing live music will always be the biggest rush for me. There’s something about the circle of energy that goes from the performer to the audience and back again that is highly addictive,” Tieff added. “It’s not something I will ever get tired of.”