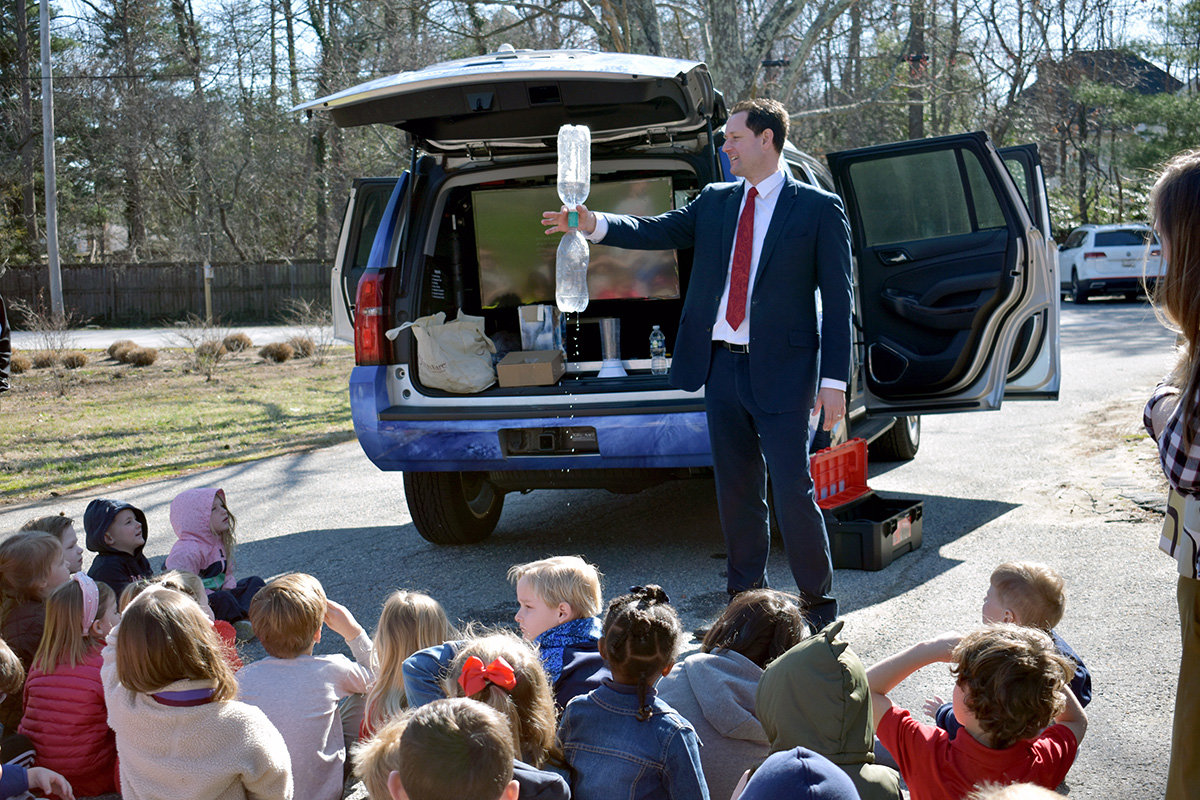 Fox 45 Chief Meteorologist Jonathan Myers demonstrated to St. Martin’s preschool and kindergarten students how to make a tornado in a bottle.
Photo by Lauren Cowin 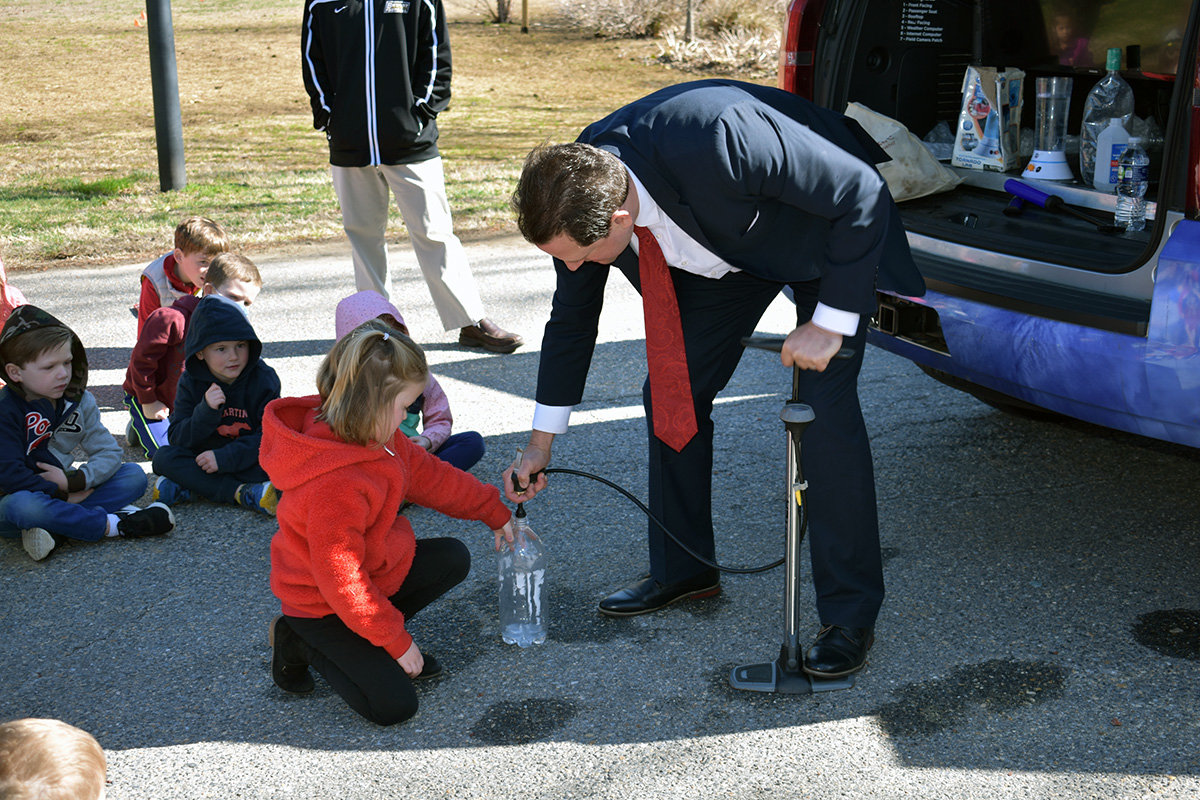 Pre-K student Morgan Camponeschi assisted with a cloud in a bottle experiment.
Photo by Lauren Cowin 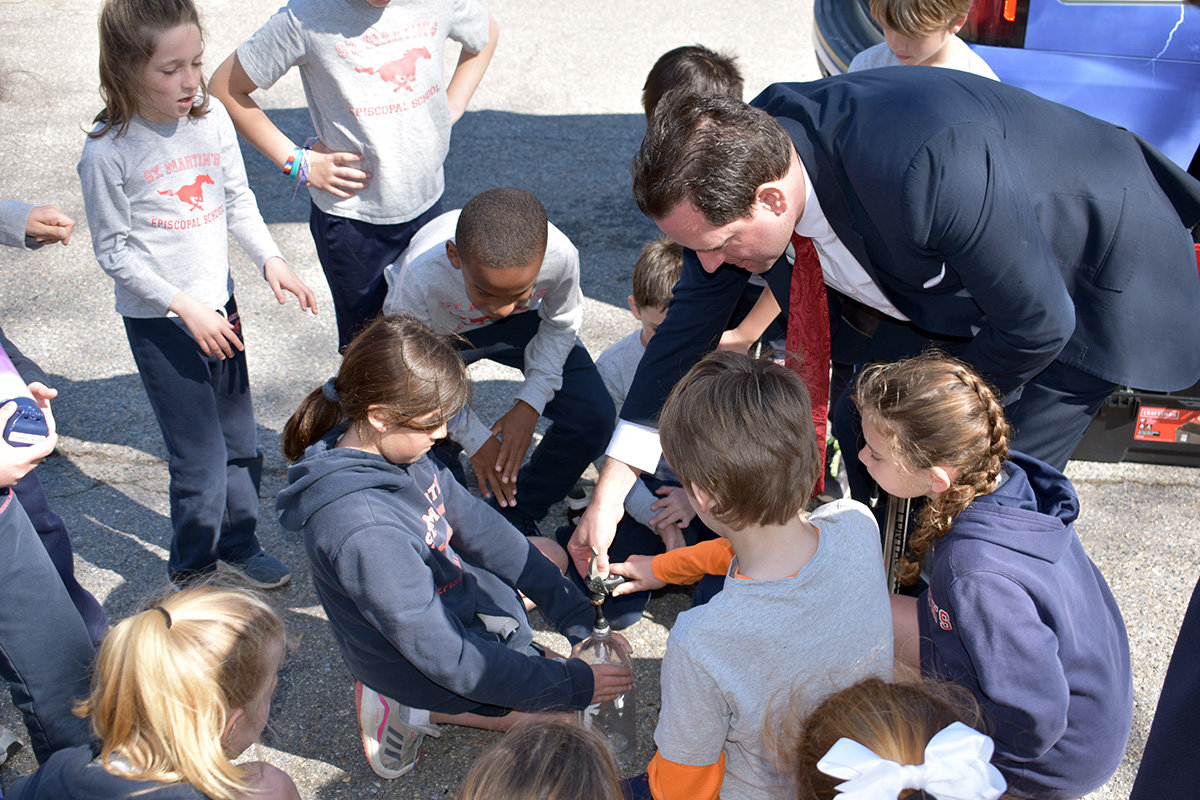 Third-grade students Watson Klenner and Lucia Padussis helped with an experiment while classmates looked on and offered advice.
Photo by Lauren Cowin
Previous Next
Posted Thursday, April 14, 2022 10:27 am
By Lauren Cowin

The preschool and kindergartners, along with third and sixth grades, learned about the rigorous math and science education required to study weather, the truth behind the weather maps you see on TV (hint: they’re green screens with nothing on them in real life!) and participated in weather-related experiments such as making a tornado and clouds in a bottle.

“Probably the most surprising part [about what I do] is that I don’t see what I’m pointing at on the green screen,” Myers said.

“The weatherman’s screen is all green! He was standing there with no picture, but when we saw him on the screen, he did have a picture; it was so creepy!” Riley said, adding, “It was my favorite day ever.”

Others were more impressed by the Chevy StormTracker.

“It was awesome! His car had lightning on it!” said kindergartner Liza Rowlett.

Myers, whose interest in weather started around fifth grade when he moved to Monroe, New York, and got to experience snow days for the first time, encourages kids to follow whatever they love all the way to a career.

“Sometimes there’s nerves, sometimes there’s anxiety, but it’s always therapy for me when I go in because it literally is a hobby for me, and I’d say if that’s something that you feel is a hobby that you think you can pursue or make a career out of, I say go do it,” Myers said.