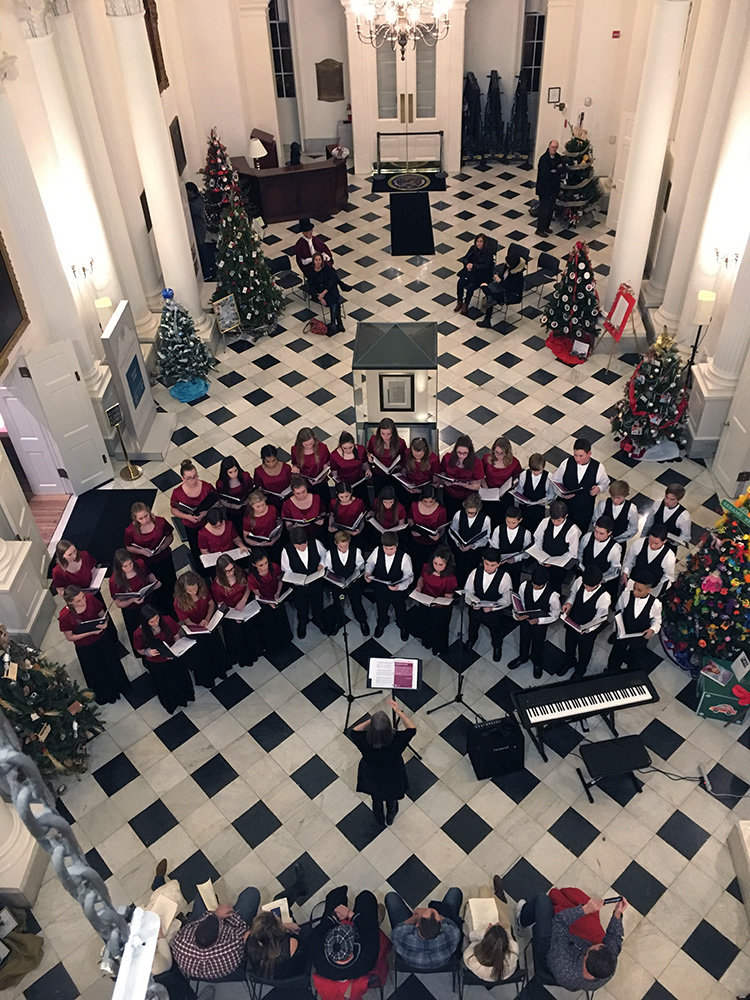 Severna Park Middle School has had an annual invitation to sing at the Maryland State House by candlelight. 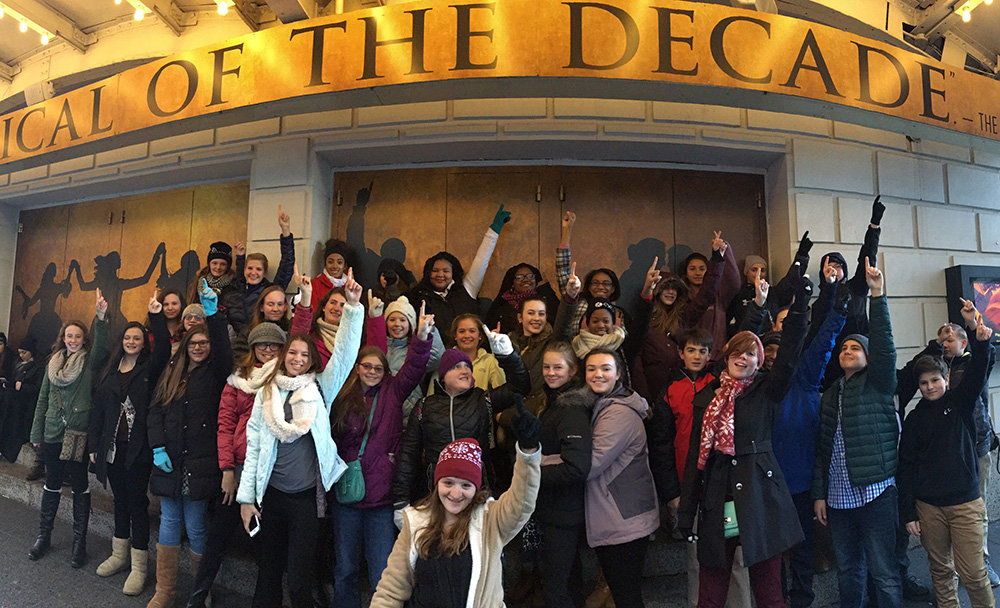 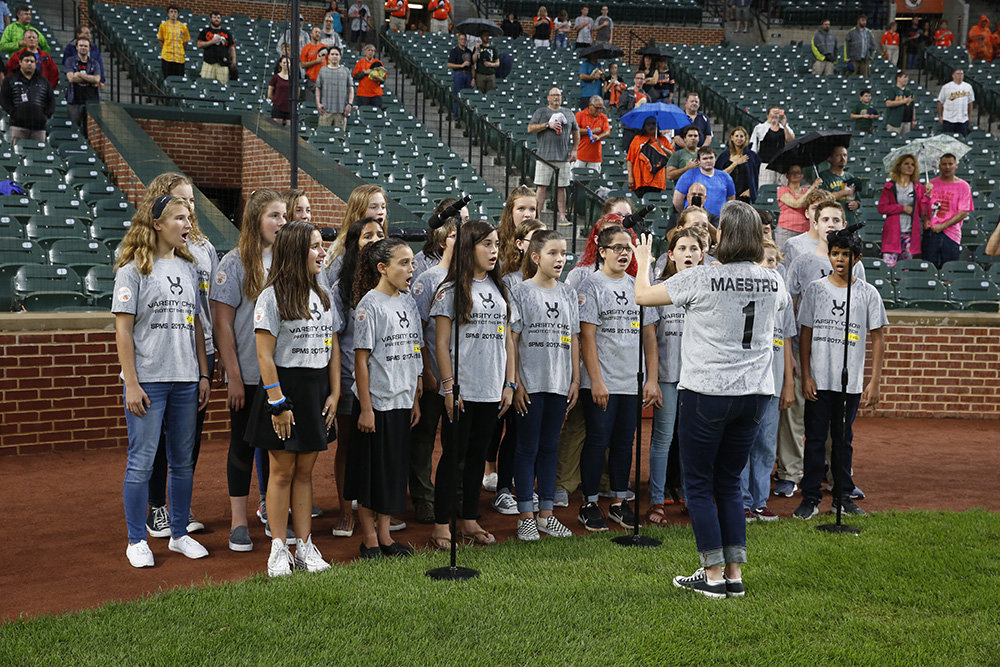 One of Sara Metcalfe’s favorite memories is directing her students as they sang the national anthem at Oriole Park at Camden Yards during the 2017-2018 school year.
Previous Next
Posted Tuesday, September 13, 2022 8:31 pm

Metcalfe’s middle students were elated they could continue to work and learn with her in their high school years.

“I’m so glad Mrs. Metcalfe will be with us in the high school,” said Eren Cameron, who is in her fourth year with Metcalfe as an incoming freshman. “She has a ton of experience and knows how to help us use our voices. If we think we are better for a different singing part, she always lets us try it out and see how it might fit. She shows us how to use our voices instead of just telling us.”

Music has always been a huge part of Metcalfe’s life. When she was 5, she decided she was going to be an opera singer (after watching Grace Bumbry perform “Salome” on her family’s black and white TV with her dad). Music was always playing in her house thanks to the Canadian Broadcasting Corporation.

Metcalfe grew up in Halifax, Nova Scotia, a city that supported and encouraged music in the schools and offered free after-school music lessons for all kids in the city. She spent most of her middle and high school afternoons at the Halifax City Music Department, singing in honor choirs, playing guitar and ukulele, and taking voice lessons.

According to Metcalfe, “Middle school was a miserable time for me, and I was never a strong student academically. If it weren't for music, I'm not sure how I would have gotten through those years. I believe my success as a chorus teacher is the professional career I had for 40-plus years, and my ability to understand what the students are going through.”

Metcalfe shared thoughts on her career move during the following conversation.

What is your fondest moment during your career at SPMS?

I cannot believe how much we have accomplished and the adventures we've had since I started at SPMS in 2014. I love the yearly eighth-grade field trip to New York City, especially the year that we gathered around the Rockefeller Center Christmas tree and sang music from our winter concert (this led to a new yearly tradition). Singing the national anthem at Camden Yards was a dream come true (just wish the Red Sox had been playing that night). It was a true honor when the varsity choir was invited to sing at the Pennsylvania Music Educators Association conference in Pittsburgh and perform the national anthem at the Defense Information Systems Agency.

The most magical night of the year was our annual invitation to sing at the State House by candlelight. I love when [assistant principal] Mr. Lou Anoff comes down to M-Hall to sing with the tenors and basses and learns to play guitar. The year my students were obsessed with the musical “Newsies” just happened to be the year my sixth- and seventh-graders got to take my other favorite field trip to see it at Toby's Dinner Theatre and they invited by boys to perform one of the songs from the show during intermission.

What will you miss the most?

My favorite part of this job is the students that surprise you and realize that you truly are making a difference in their lives. The student who did not want to take guitar class but, by the end of the year, is coming in once a week to show you the new songs they learned. The kids who are not chorus students but come down to play the grand piano. The student who made you want to tear your hair out, but you see them at the high school and they're still in chorus, still singing. The boys in chorus class who never want to sing out during class, but when they are participating in a musical theater workshop in New York City, they are totally into it, and you realize that they can really sing and dance! And, then lead everyone is a huge sing-along at Hard Rock Cafe later that day.

What new challenges excited you to move over to SPHS? What are you most excited to do during your first year at SPHS?

Mr. [Michael] Brisentine and Ms. [Kathy] Gabriele are stellar musicians and teachers and have left some big shoes to fill both through the huge impact they've made on their students and the high standards at which they have them performing. Their knowledge of choral literature is impressive, and I have always been enamored of the choice of music they programmed on their concerts.

I'm really looking forward to the wide variety of more ambitious music we can perform with the various vocal ensembles Mr. Brisentine has created: chorus, vocal ensemble, treble chorus, and sol. It will also be a nice change to teach piano (which is more in my wheelhouse) than guitar. But what I am most looking forward to and so super excited about is to sing with all of my favorite people again!

I believe my biggest challenge will be taking over the a cappella group Mr. Brisentine created called Sol. I got to sit in on the class and watching Mr. Brisentine work with those students was truly inspiring. You could see the incredible bond they created with one another and the true affection and respect they have for him, by the way they sang with so much musicality and emotion. The intelligent musicianship of this group is off the charts.

I have performed a wide variety of vocal music over my career, and I am looking forward to learning something new and adding to my toolkit. And I'm extremely thankful that my dear friend Mr. Brisentine has offered to mentor me through my first year.

What is the secret to your success as such a loved teacher?

The real secret to my success: my students! I could not do what I do if I didn't have the most amazing middle schoolers who trust me, are willing to be goofy with me, love squeaky chickens and dragons (especially Mama Chicken), Alfred, "The Mice” and Mr. Bill, and take chances trying new things. I have also been extremely lucky to have had the most incredible parent volunteers who willingly put in countless hours to ensure the success of the musical, varsity choir, drama camp, musical revue and more.

I love living in Severna Park and being able to support the musical community of our town. I am looking forward to maintaining my relationship with SPMS through feeder concerts, recruiting events, etc. and continuing the extraordinary legacy of music making at SPHS.

SPHS To Host Marching In The Park

Meet The Student Member Of The Board, Zach McGrath

Scouts Improve Their Community While Striving To Inspire Others