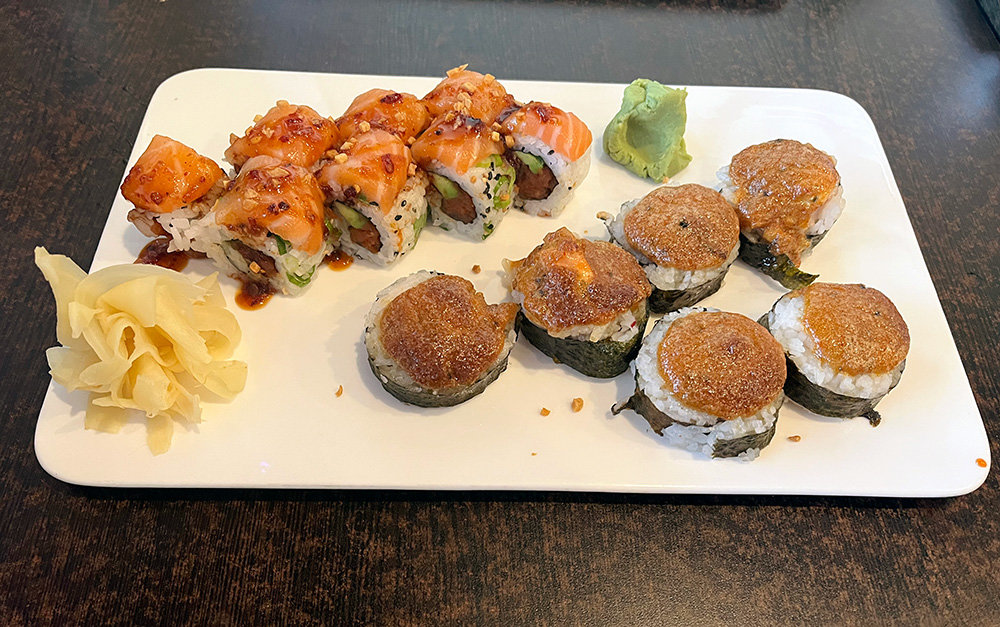 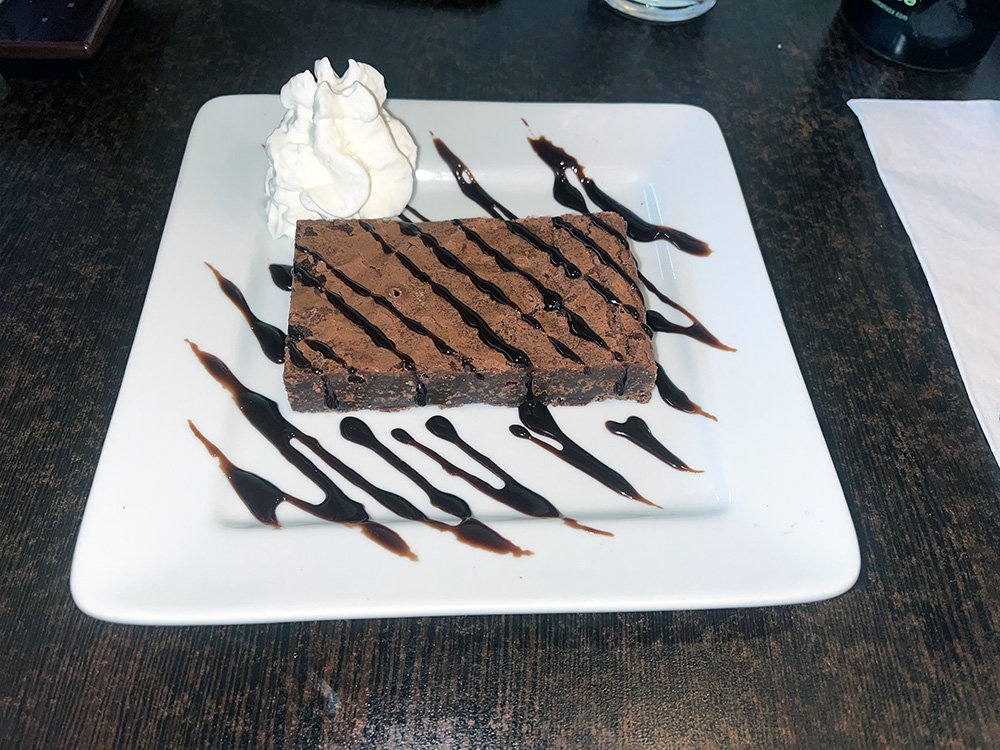 The brownie was served cold and drizzled with chocolate syrup and a side of whipped cream.
Photos by Mary Cobbler 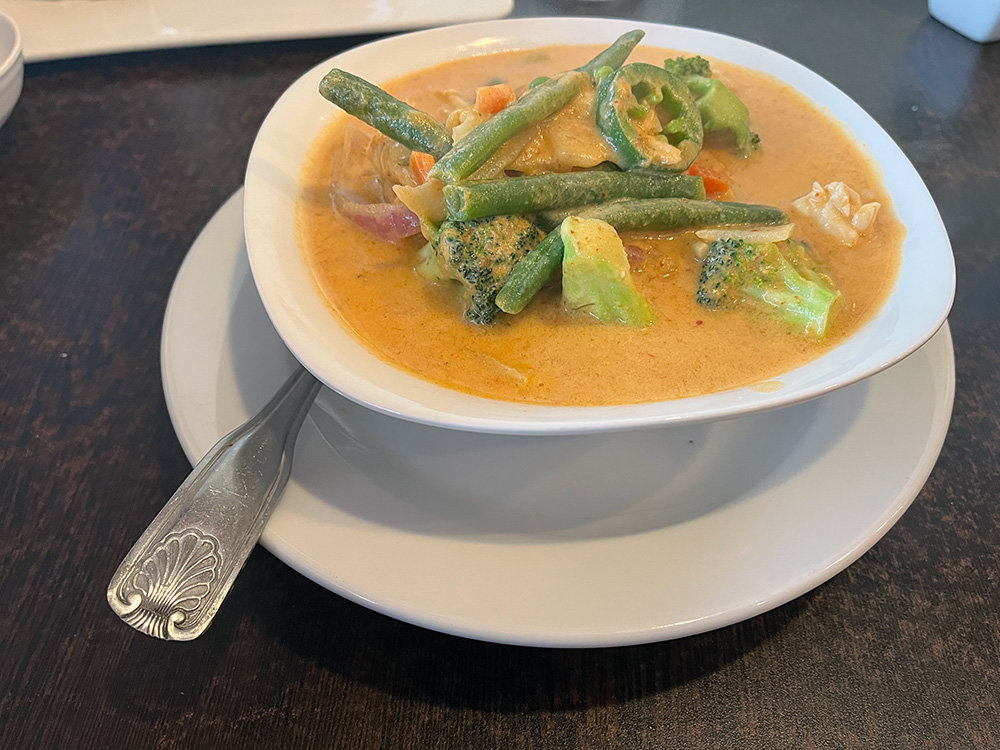 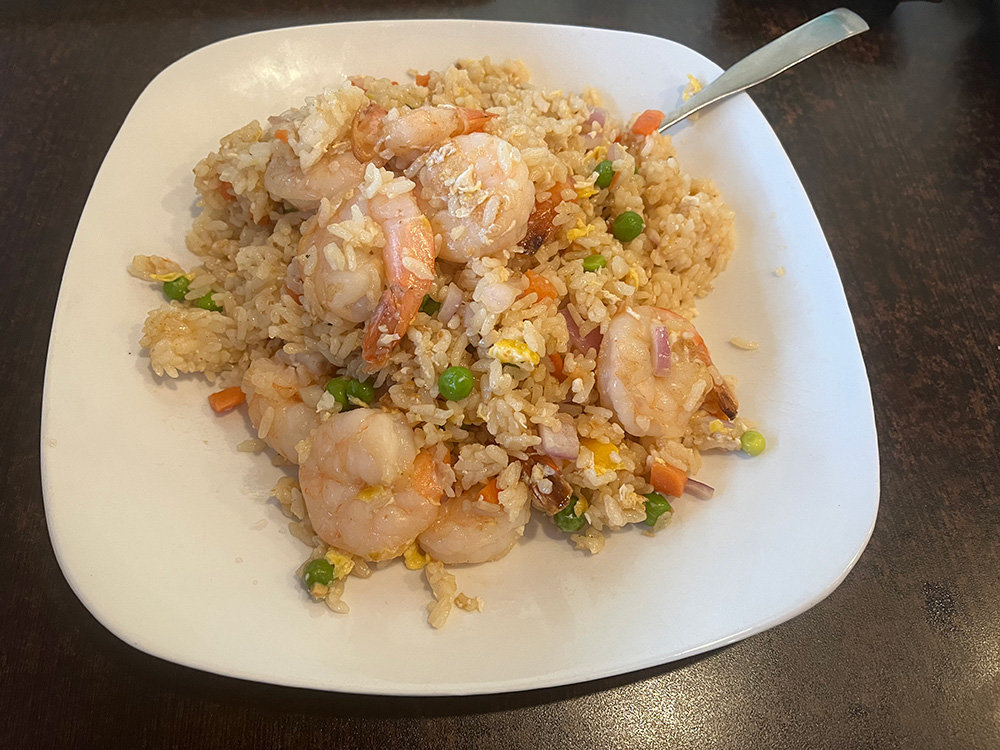 The shrimp fried rice had savory flavor, was speckled with mixed vegetables, and was topped with large, succulent shrimp.
Photos by Mary Cobbler 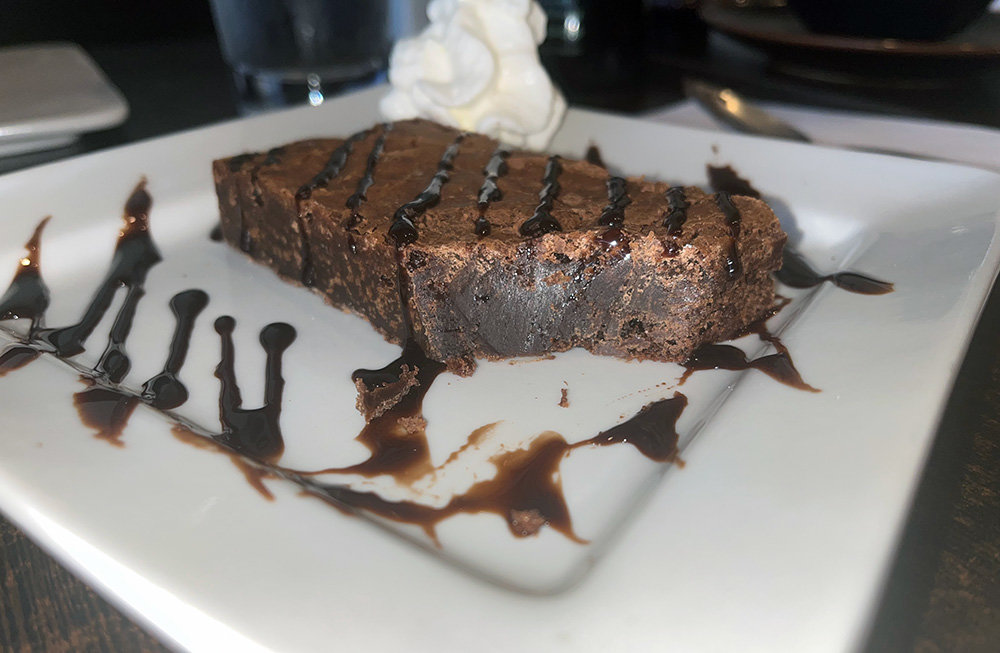 The brownie was served cold and drizzled with chocolate syrup and a side of whipped cream.
Photos by Mary Cobbler
Previous Next
Posted Friday, October 7, 2022 11:48 am
Where To Find Oishi Japanese Cuisine

Oishi Japanese Cuisine may be inconspicuously tucked away in a shopping center in Arnold, but inside the quaint restaurant, you’ll find a cornucopia of creative flavor combinations.

My family and I arrived at Oishi around 5:00pm on a Saturday. The space has a sleek interior, leather booths and red lanterns. On that Saturday, the restaurant was calm, with just a couple of other patrons seated at the sushi counter. We were greeted cheerfully by the owner and seated by a friendly server, who gave us her recommendations for appetizers and sushi.

Although the name of the restaurant suggests Japanese cuisine, the menu offers more variety. Thai entrees with both red and green pepper choices, sushi and sashimi options, fried rice with protein or vegetables, and Japanese teriyaki dishes are all available. You’re bound to find something you like, even if you can’t decide which Asian food you want. Talk about a crowd-pleaser!

We kicked off our meal with spring rolls (harumaki) and edamame appetizers. The spring rolls were crispy, filled with soft vegetables, and fried in a deliciously tender shell. Served with a sweet chili sauce, the one-two punch of sweet and spicy seemed to set the tone for the evening (which, spoiler alert, contained a lot of sweets and spices). The edamame was steamed to a perfect consistency, then topped with chunks of sea salt to bring out the natural flavor of the beans. It was a healthy beginning to an indulgent meal.

I ordered the Sarah’s roll and the dynamite roll from the sushi menu, and the shrimp fried rice from the kitchen entrees. My husband ordered Thai curry with vegetables but substituted the rice with extra veggies. We ordered my kids some Philadelphia rolls.

My husband and I both were thrilled by the Thai curry with vegetables. It was one of the most flavorful dishes I’ve had in recent memory — perfectly balanced, with the spicy curry tempered by the creamy, lightly sweetened sauce. The presentation was terrific (true across the board for this restaurant) and immediately made my mouth water. A hearty array of vegetables including broccoli, green beans, red onions, carrots, peas, bamboo shoots, spinach, and jalapenos rose above the curry broth. The chicken was sliced thin and cooked well. We savored every bite and were tempted to lick the plate. Again, this dish is normally served with white rice, but since my husband follows a low-carb diet, he went for the extra veggies. I would think it would be even more phenomenal with white rice (like just about everything else on the planet).

On to the sushi — if you’re a fan of new flavor combinations, you’ll find no shortage at Oishi. I followed the server’s recommendation and was happy — and surprised — at some of the flavors I sampled. The Sarah’s roll contains spicy tuna and creamy avocado wrapped in soft rice and seaweed, topped with raw salmon, a sweet Hawaiian barbecue sauce, and chunks of fresh garlic. It was fresh and filling, and at the end of the roll, I still couldn’t decide on the flavors. The garlic and the Hawaiian barbecue sauce was interesting; I certainly liked it! Sweet and spicy is always a favorite combination of mine, but I’ve never associated garlic with sushi before, so I was a bit thrown. I’m not sure it would be my go-to sushi roll. My husband said it was awesome and made him want to travel the world, but maybe he’s more adventurous than I am.

The dynamite roll was overflowing with flavor as well, and although it was another unexpected combo, I thoroughly enjoyed it. I’ve had dynamite rolls at other sushi restaurants, and they were different from this one — so, fair warning, it is not deep-fried, but it is served hot. Flaky salmon and cooked tuna are wrapped in more fluffy rice (have I mentioned I love rice?) and seaweed, topped with a spicy sauce, then put under the broiler. Unlike the other spicy sauces, this was more like a paste laid thickly on top. I have no idea what the spicy sauce was, but the server told me it was mayonnaise-based. The taste of the cooked fish with the spicy sauce was a delightful change of pace.

The Philadelphia roll was everything it should have been — the deep taste of smoked salmon and the indulgent cream cheese wrapped up in rice and everything bagel seasoning stood up to any Philly roll I’ve had at other restaurants.

The shrimp fried rice was delicious — warm rice with tons of savory flavor, speckled with brightly colored mixed vegetables and topped with large, succulent shrimp. Unparalleled comfort food, in my opinion. The vegetables made their presence known but did not overwhelm the flavor of the rice.

We finished the meal with a brownie. This brownie was probably the densest brownie I’ve ever eaten — it wasn’t soft, but when I pushed my spoon into it, the inside was unbelievably fudgy! I would definitely order this again. It was served cold and drizzled with chocolate syrup and a side of whipped cream. My husband took one bite and decided that — after all his efforts — he was kicking his low-carb plan to the curb for the rest of the evening. We shared the brownie and felt like we were about to explode with all the delicious food, so we called it quits.

For one Japanese soda, the spring roll appetizer, edamame, the Sarah roll, the dynamite roll, the Philadelphia roll, the fried rice, the Thai chili with vegetables, the brownie, and three rice rolls for my child, who is a picky eater, the bill was $117. This sounds hefty, but it was for four of us, and we took quite a bit of food home.

I can whole-heartedly recommend Oishi for a flavorful and fun evening of Asian cuisine. Whatever you’re craving, Oishi has you covered.

The Social Combines Tasty Food And A Cozy Atmosphere