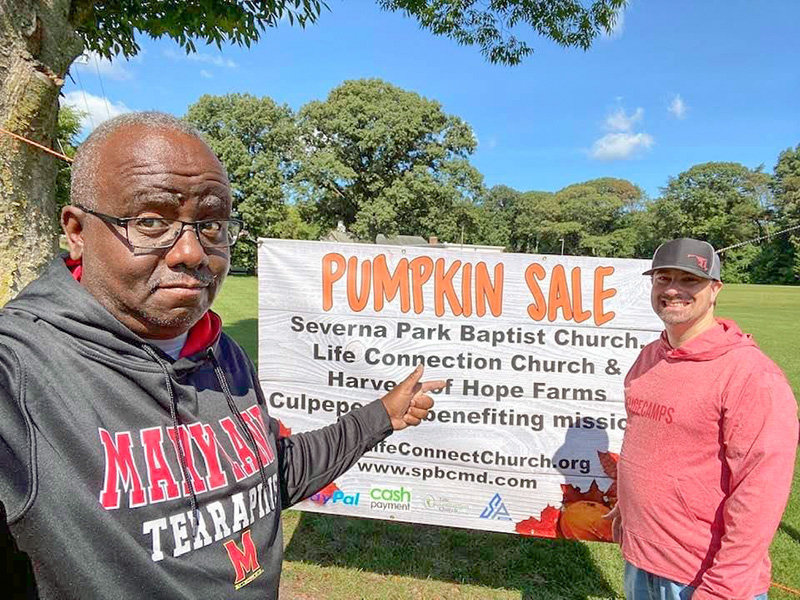 Severna Park Baptist Church (SPBC) and Life Connection Church (LCC), with the significant support of Community Bible Church (CBC) in Manassas, Virginia, are partnering to sell pumpkins to raise funds for missions. Over 7,000 pounds of pumpkins are scattered across the field at SPBC's lawn. In addition to raising funds, the project gives churches a chance to meet people in the community.

The Rev. Martin Bennett (LCC) said the pumpkin project originated with his friends John and Luci Clark. Bennett and his wife, Demetra, used to serve at CBC with the Clarks. Martin was the youth minister, and John was a lay leader. The friends kept in touch through the years, but Martin was surprised when John called, offering him literally tons of pumpkins.

John and Luci were inspired by the story of Jason Brown, a former NFL defensive lineman making millions of dollars. Brown, feeling led by God, walked away from football to start farming to feed the hungry. Inspired, the Clarks decided to do likewise. The Clarks now run a 160-acre farm they call Harvest of Hope in Virginia in addition to John's job as CEO of the National Center for Missing and Exploited Children. Like Brown, the Clarks use their farm to support local food banks, help those in need, and support missions, ministries and churches.

Martin was thrilled at the pumpkin possibilities, but their church worships in a warehouse facility – not conducive to creating a Snoopy-worthy pumpkin patch. But he knew who he could call for help. “Pastor Dave Brown and I have partnered for years on mission trips, and we've become good friends,” he said.

Brown is the senior pastor of SPBC. Those ongoing mission projects provide food and medicine in Nicaragua and the Dominican Republic. The churches also collaborate on missions projects in the Caribbean. A joint pumpkin sale was a natural extension of the partnership and will provide funding for future trips.

Of course, it also helps that SPBC has a large front lawn along Benfield Road. Brown, always seeking ways to engage the community, readily welcomed the pumpkin patch idea.

Friends and members of LCC moved the pumpkins from Virginia to Severna Park and prepared them for sale. Bob Jurick donated his truck and his pop-up trailer and helped with the setup. Edward Overton, John Kinsey, Meric Bennett and Martin’s son drove to Virginia, loaded and unloaded the pumpkins, and Kenya Christian helped unload.

John Clark also helped transport and unload the pumpkins. “He loves seeing the pumpkins from seed to selling,” Martin said.

Volunteers from LCC and SPBC are working on a rotational schedule to greet their neighbors and sell the pumpkins.