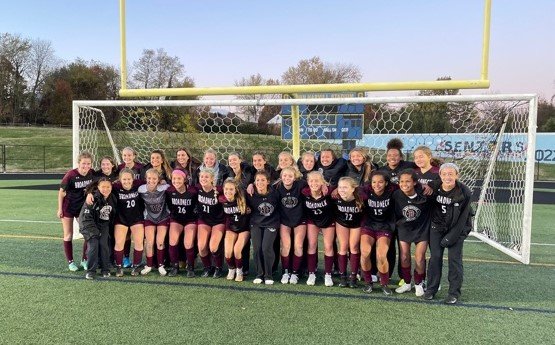 The Broadneck Bruins faced the Quince Orchard Cougars at John Harvill Stadium today in the MPSSAA girls soccer state semifinals. The game was hard-fought and the field was balanced, with both teams making key offensive and defensive plays, but Broadneck came out on top.

The score remained 0-0 through regulation and overtime, leading to a penalty shootout. Cougar Annie Faraone was first up, but her shot was saved by Bruins goalkeeper Mason Smargissi with a dive to the bottom left corner of the goal. Rachel Swartz, Carli Sullenger and Erin Hodge all made goals for the Cougars. Bruins Reagan Baldwin, Sadie Wilkinson and Éva Mowery each scored for their team, while Carly Johnston hit the top right corner of the goal post, leaving the shootout score knotted 3-3. Megan Moon was the last to shoot for Quince Orchard and hit the ball over the goal. Maddie Capps then scored the winning goal for Broadneck.

Quince Orchard’s advance in the state tournament ends tonight, and the Bruins will continue on to the Class 4A state final. The 4A championship will be played Saturday, November 20, at 7:30pm vs. Walt Whitman at Loyola University.