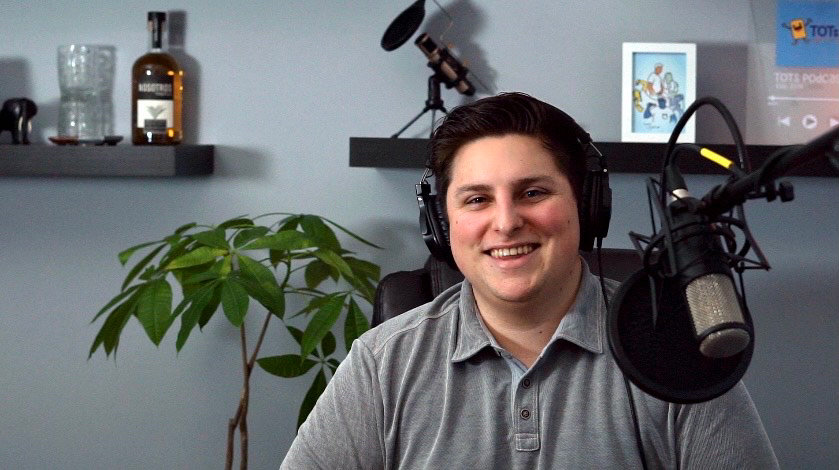 This time last year, the Netflix phenomenon “Tiger King” had caught the attention of the entire nation, but especially one local podcaster, who is bringing “Tiger King” to Severna Park.

Ben Gardner, a lifelong Severna Park resident and full-time salesman, is the host and founder of the TOTs podcast, which stands for “thoughts on things.”

In November of 2019, Gardner started the TOTs podcast in a closet in his shared college apartment. Now, he records the show in his childhood bedroom. Gardner primarily uses social media to find his guests, and while the podcast originated as a show for all things business, it now features people from all walks of life who have a story to tell.

“I find the most interesting people that I can find that I think my audience is going to enjoy, and then I invite them on the show,” said Gardner. “And sometimes you have somebody that nobody has heard of but that has a really cool story, and people fall in love with them.”

And sometimes, Gardner features a star of “Tiger King.”

Gardner, a self-proclaimed animal lover, was fascinated by the series and knew there was more to the story when the show premiered in March 2020.

“I started to realize that I have a podcast. It's not very big, but I do have a platform where I can talk to these people,” Gardner said. “Why not reach out?”

After reaching out to the entire cast with little luck, Gardner was connected with Saff Saffery, an employee at Joe Exotic’s The Greater Wynnewood Exotic Animal Park. Even after recording two episodes with Saffery, Gardner was eager to learn more. On a whim, he sent a letter to Exotic, who is currently in prison. Exotic wrote back that he would not be able to do the interview, but connected Gardner to his manager, Eric Love.

“I reached out to his manager and he ended up coming on the show,” said Gardner. “That's kind of where things really picked up, because now I had access to Joe through Eric, and Eric was giving me all of this information about their side of things.”

Gardner admits to being “Team Joe,” but he still wanted to hear the other side of the story, so he reached out to Carole Baskin for a second time. Baskin, who typically stays away from the media circuit, needed some convincing. Gardner’s day job as a salesman came in handy, and he promised Baskin a fair platform to tell her side of the story.

“It's like they say, don't meet your heroes because it'll ruin that,” said Gardner. “Well, never meet your villains because meeting Carole Baskin was insane.”

Gardner said his conversation with Baskin was eye-opening. In the episode, they discuss the infamous court cases, how Netflix spun the story, and the conservation work that Baskin does at the Big Cat Rescue.

“After this interview, I've completely changed my mind about who she is,” said Gardner. “I use the word duped, because it really feels like Netflix and the Joe Exotic side duped everybody into believing that she's an awful person. She’s not as crazy as they made her seem, and she's actually trying to do something good for the world.”

The episode aired on March 12 and has received rave reviews from listeners. Gardner finally has answers to his questions about “Tiger King.” He believes that this episode will tie up any loose ends for people like him who were so fascinated by the story last year.

Gardner has two seasons of TOTs under his belt and is currently working on the third. He has many exciting guests lined up for the future and has no intention of slowing down.

“Honestly, I would love to do this full-time and make this my main occupation,” said Gardner. “It's not common for people to be able to do that. But I've done things in the past that were supposed to be impossible.”

Gardner encourages anyone with suggestions for future collaborators to contact him. The TOTs podcast can be found at www.totspodcast.com or @TOTscast on Instagram and Twitter. Catch the “Carole Baskin: Cat's Out of the Bag” episode or any of Gardner’s other impressive guests on Spotify, Apple Podcasts and Google Podcasts.