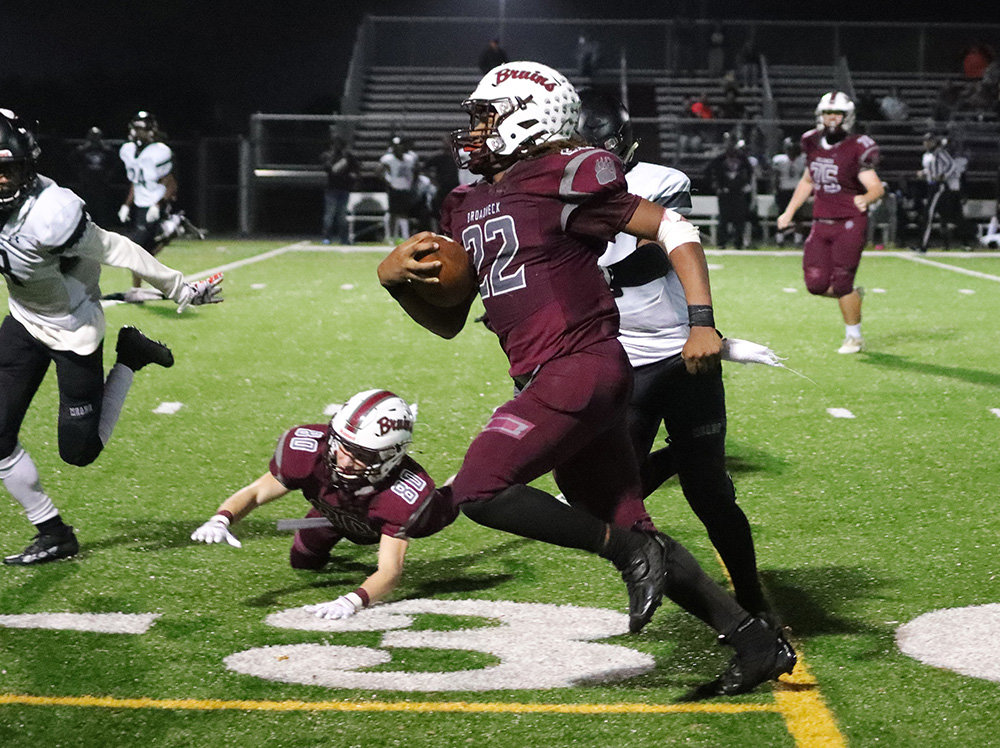 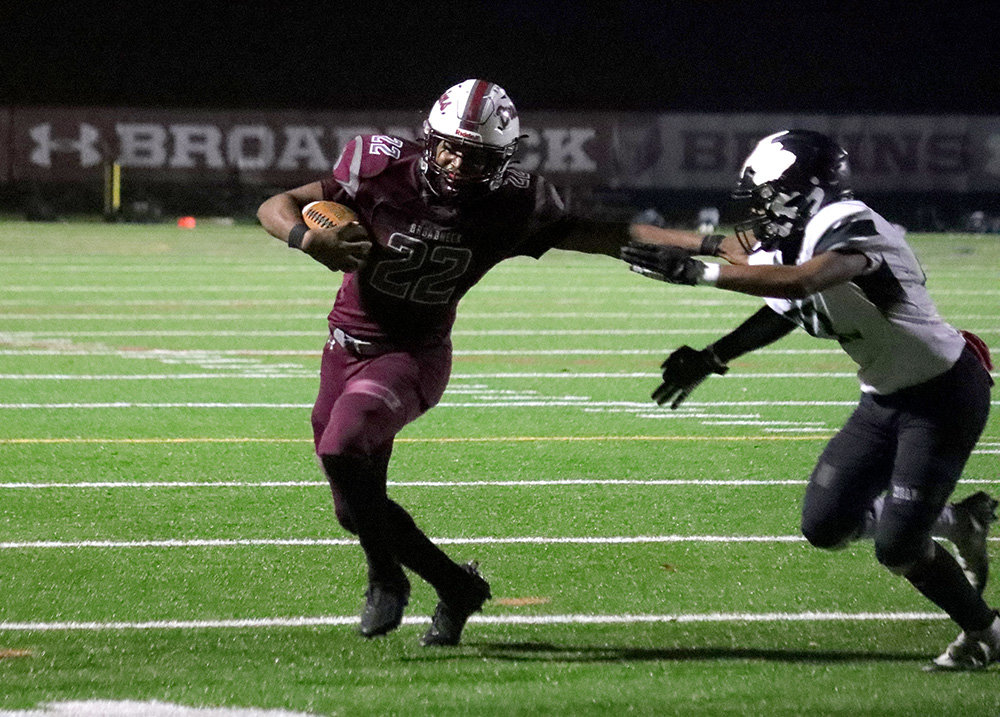 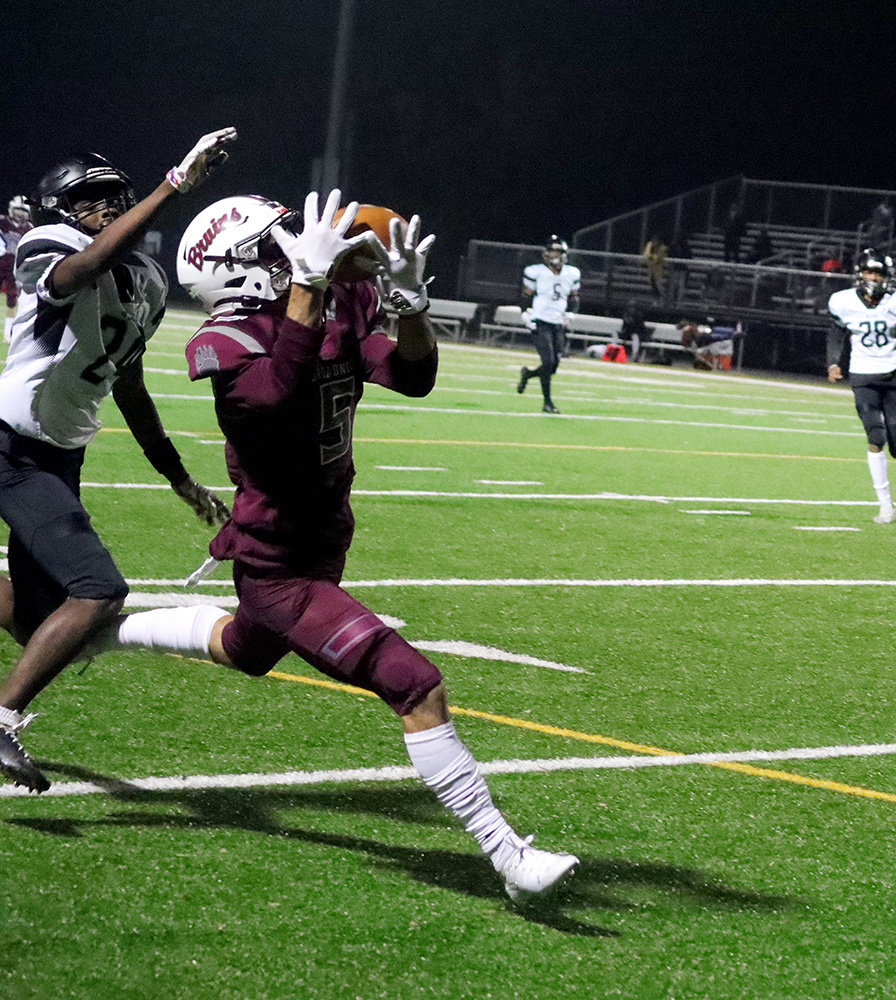 Eli Harris caught an over-the-shoulder pass while racing down the sideline.
Photos by Dennis McGinley 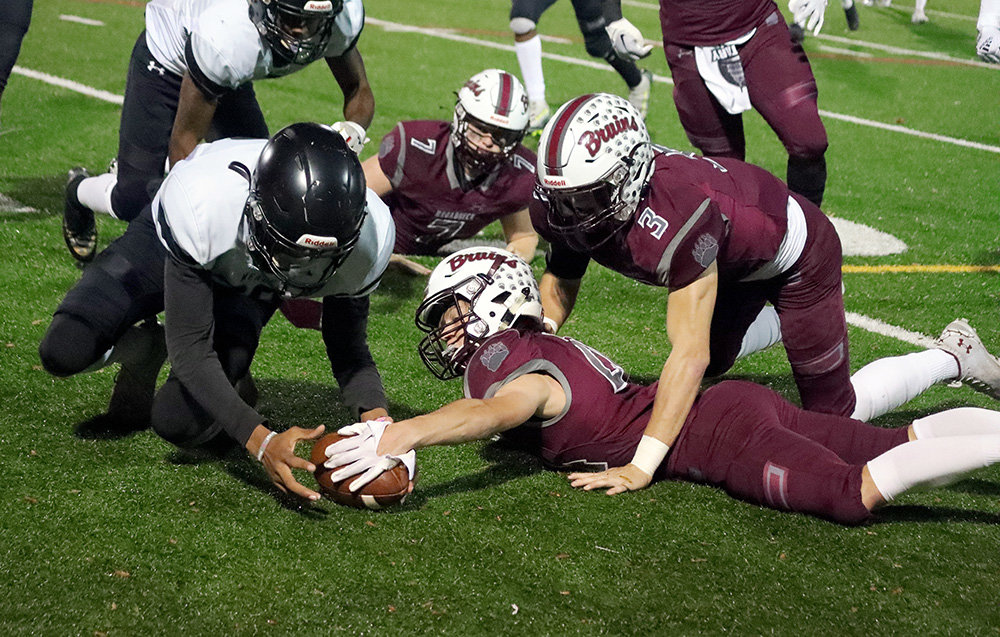 Cole Friedman and Braden McCassie fought for control of the football.
Photos by Dennis McGinley 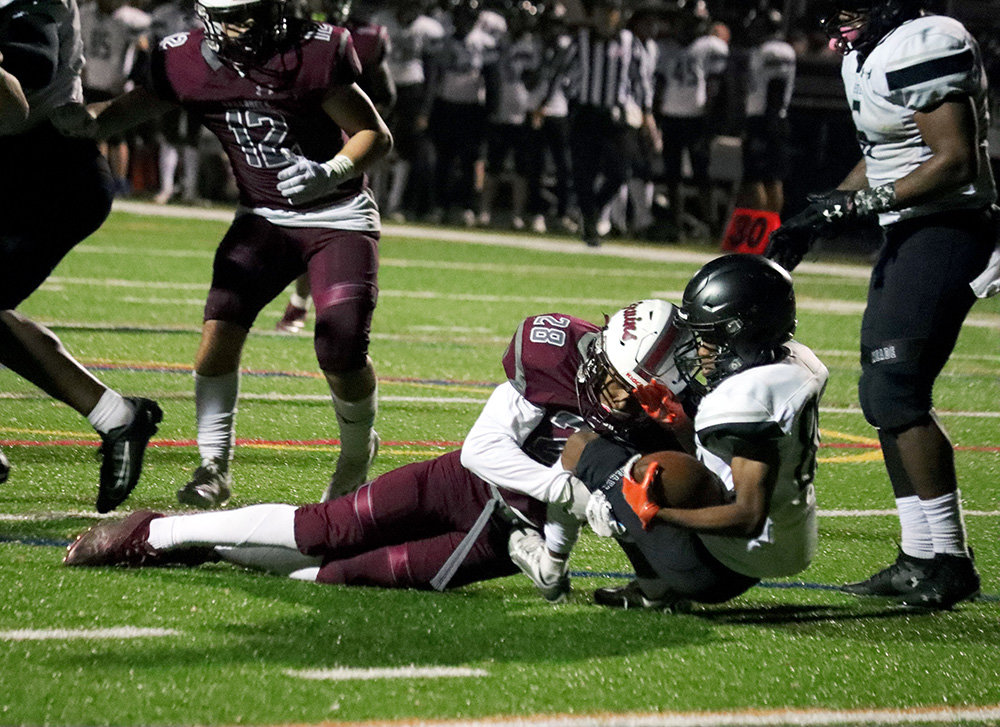 Meade's football team was late arriving for Friday night's region semifinal football game with Broadneck and the delayed start of the game, or perhaps having a bye last week, resulted in a slow start for the host Bruins. After halftime, though, Broadneck found their rhythm. Dominating on both sides of the ball, Broadneck used a strong second-half performance to defeat Meade 30-13 and advance to next week's state quarterfinal, where they will host Winston Churchill.

Numerous costly penalties and an inability to put together sustained drives left the Bruins trailing 7-0 at the half.

Coach Rob Harris attributed some of the struggles to Meade, but ultimately felt his team wasn't quite ready.

“Meade had a good plan, milking the clock and limiting our possessions,” Harris said. "However, we were shooting ourselves in the foot with penalties and we were sloppy. We were treating Meade as a passing team even though they were running the ball and we weren't filling our run lanes."

After two ineffectual drives by the Bruins, Meade went 64 yards in nine plays to open the scoring early in the second quarter. Broadneck's best drive in the half stalled at the Mustangs’ 28-yard line with kicker Chris Coleman coming up just short on a 45-yard field goal attempt.

After making adjustments on defense, Broadneck forced a Meade punt to open the third quarter. Taking over on Meade's 37-yard line, the Bruins finally got on the board on a 27-yard touchdown pass from Cam Catterton (9-14, 125 yards and one touchdown) to Machi Evans (five catches for 71 yards and one touchdown). After another Meade punt set the Bruins up at the Mustang 45-yard line, Broadneck needed just two plays to take their first lead of the night with Ian Mauldin (19 carries, 155 yards and three touchdowns) running in from nine yards out.

Having seemingly taken control of the game, Broadneck fumbled on the next possession with Meade scoring from 17 yards out on the next play early in the fourth quarter. Anthony Hawkins blocked the extra point and Broadneck held a 14-13 lead. Wasting no time in responding, the Bruins marched down the field, pounding the ball on the ground for 69 yards, finishing with Mauldin scoring from four yards out. Harris alluded to adjusting to what was working, saying, "Tonight we showed if we have to run every play, we will run every play."

Harris added, "We have three big backs and the offensive line was tremendous tonight."

Broadneck forced a three and out on Meade's next drive and the Mustangs snapped the ball out of the end zone for a safety, increasing the Bruins’ lead to 23-13. Following the free kick, Broadneck took over at midfield and Mauldin took the handoff down the sideline for a 50-yard touchdown. If Meade had any chance of a comeback, that possibility ended on the next drive when Jalen Carter intercepted the Mustangs in the end zone.

Having not been challenged throughout the county league season, the Bruins can hope that Friday night's adversity, and their response, may end up serving them well as they move on to the state quarterfinal.