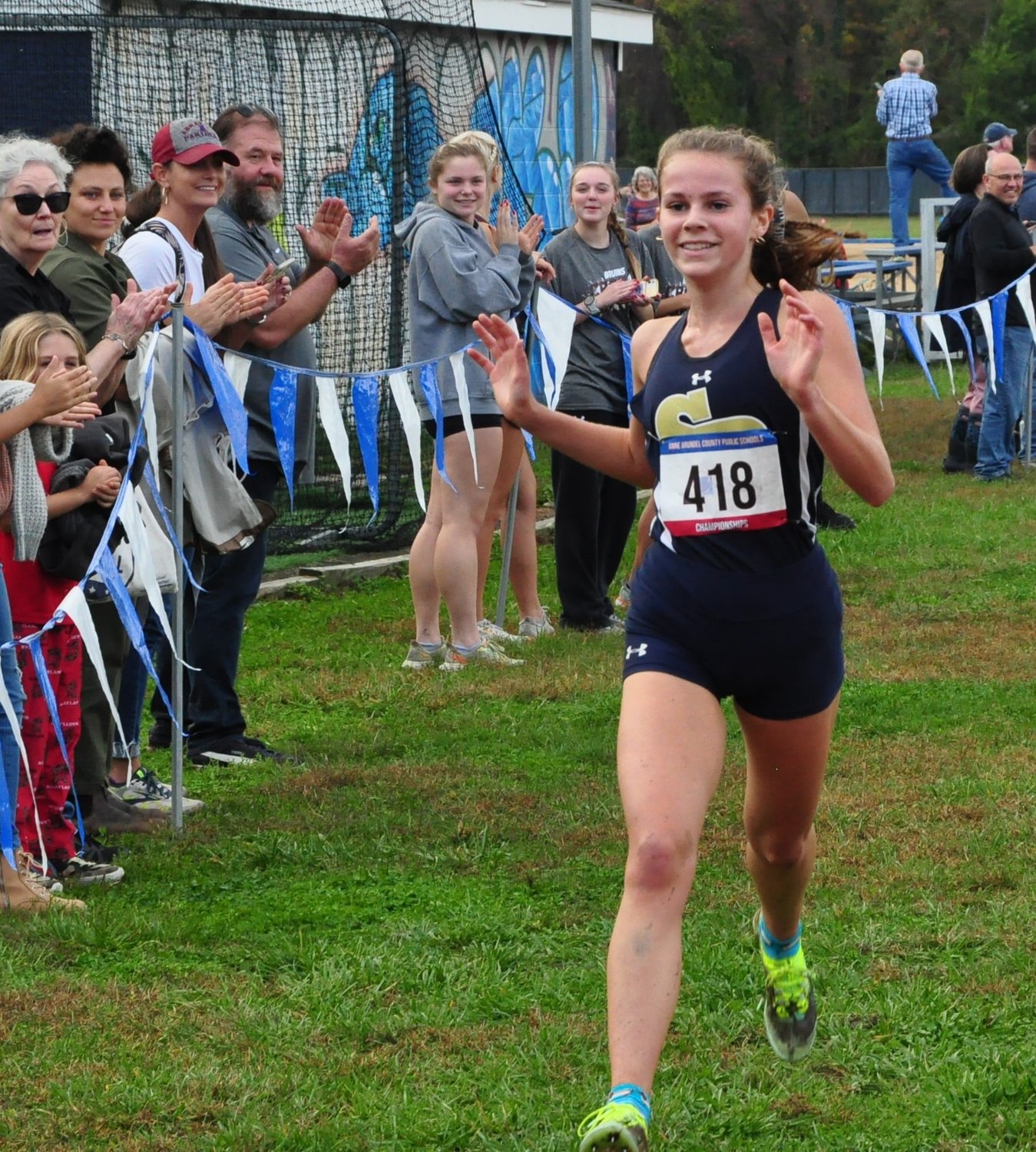 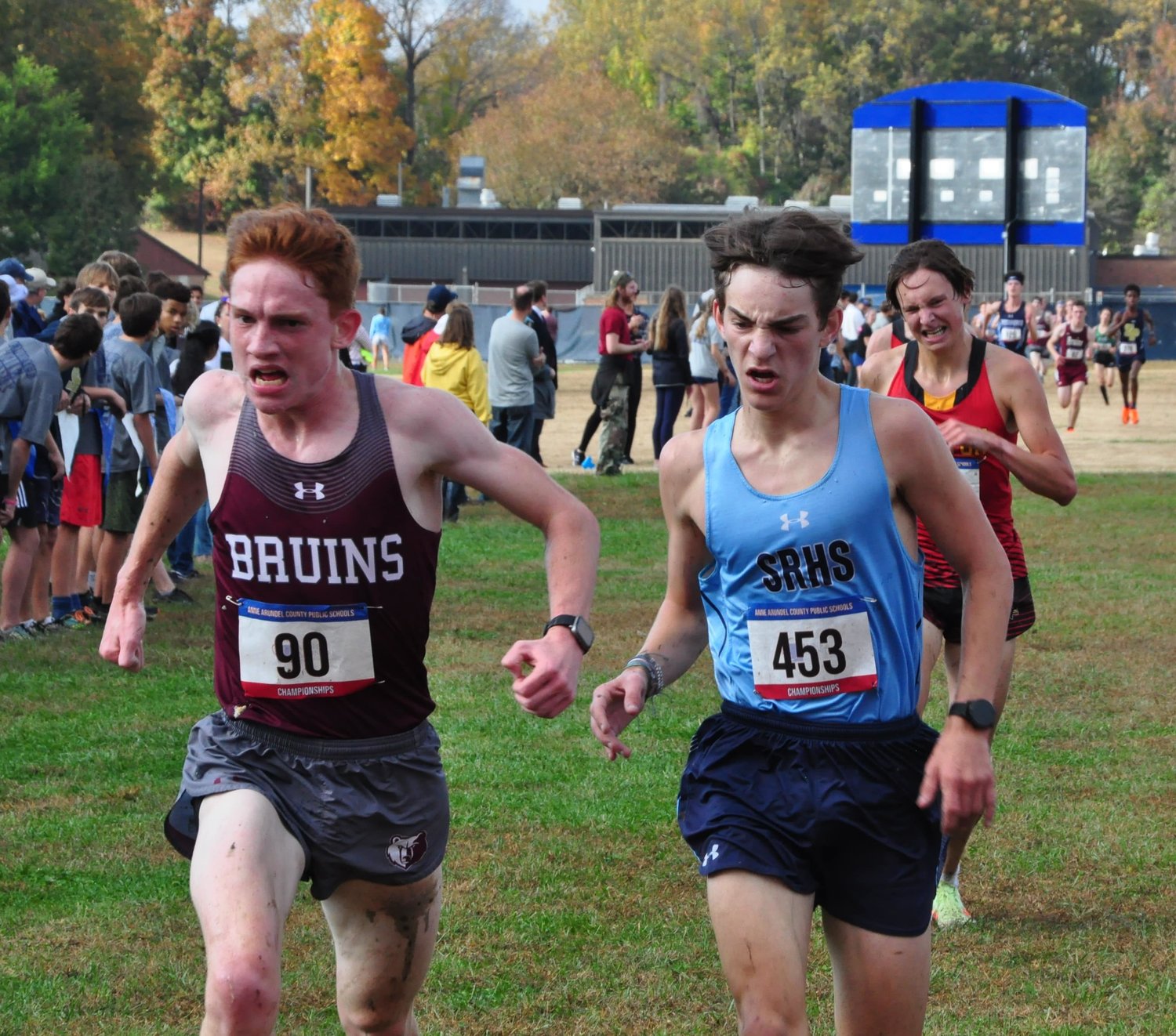 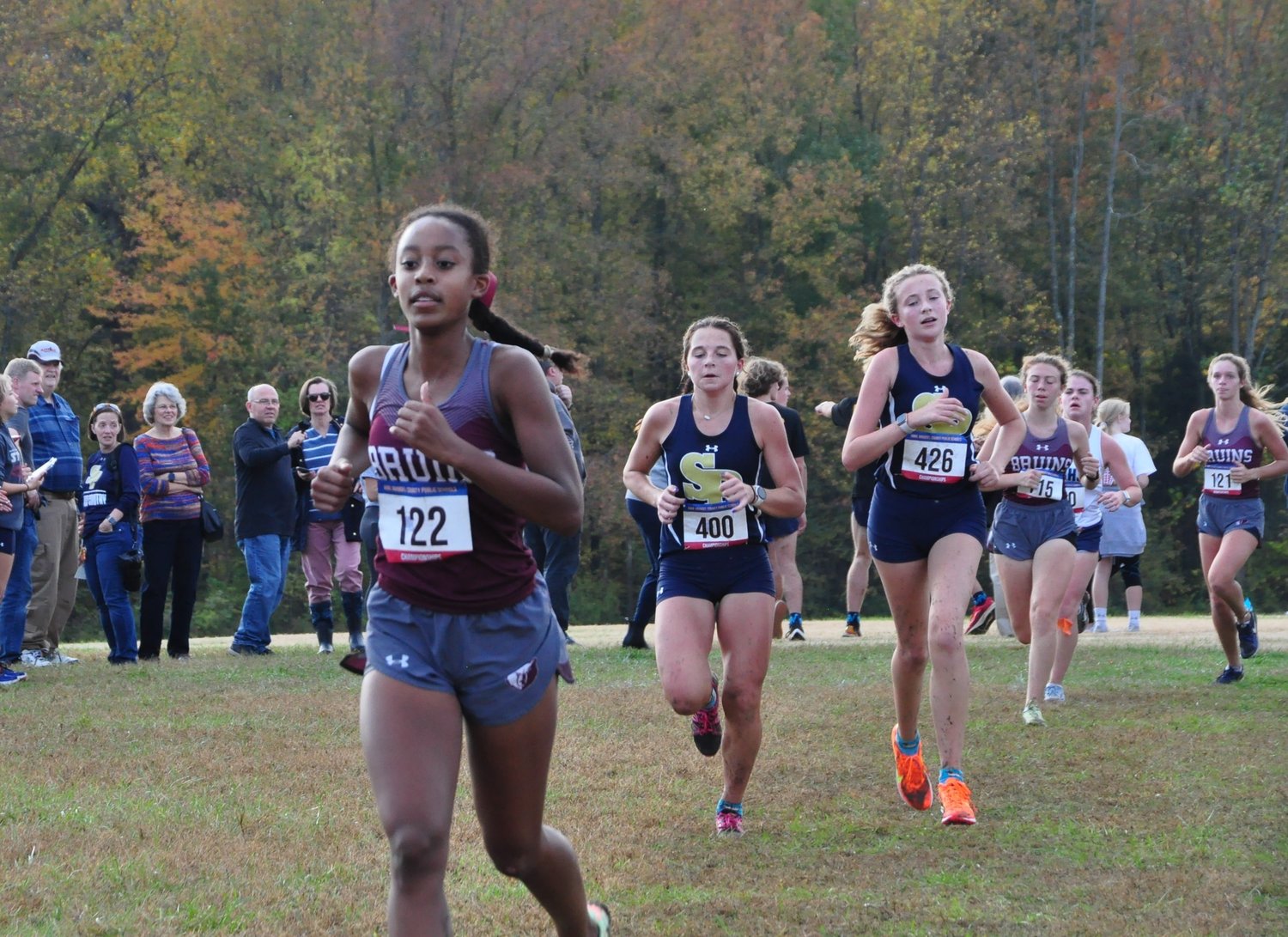 Broadneck High School freshman Nya Williams, front, competed at the county cross country championships at South River High School in Edgewater on October 26. Williams went on to finish with a time of 21:45.6 on the 3-mile course.
Photos by Mark Patton 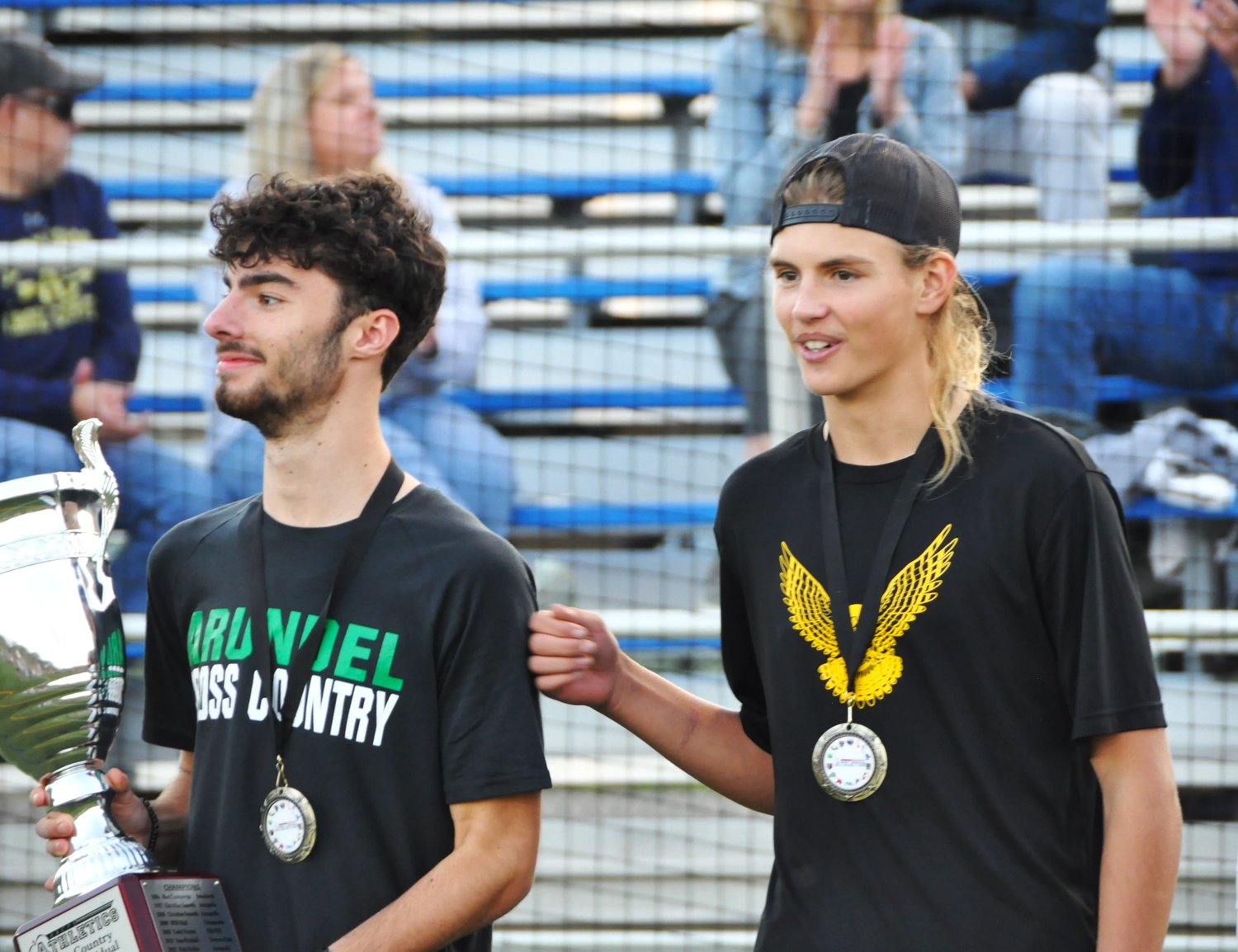 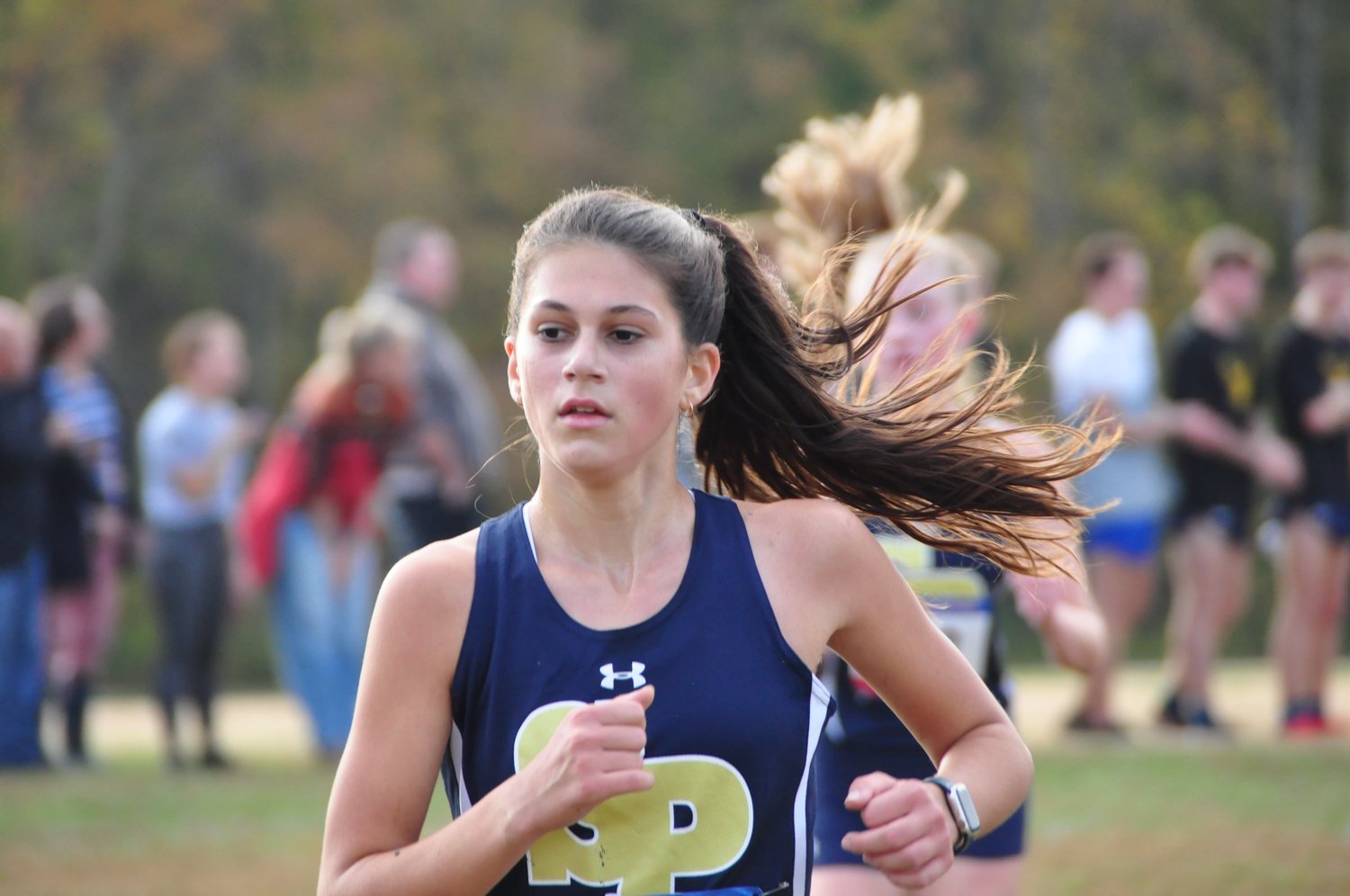 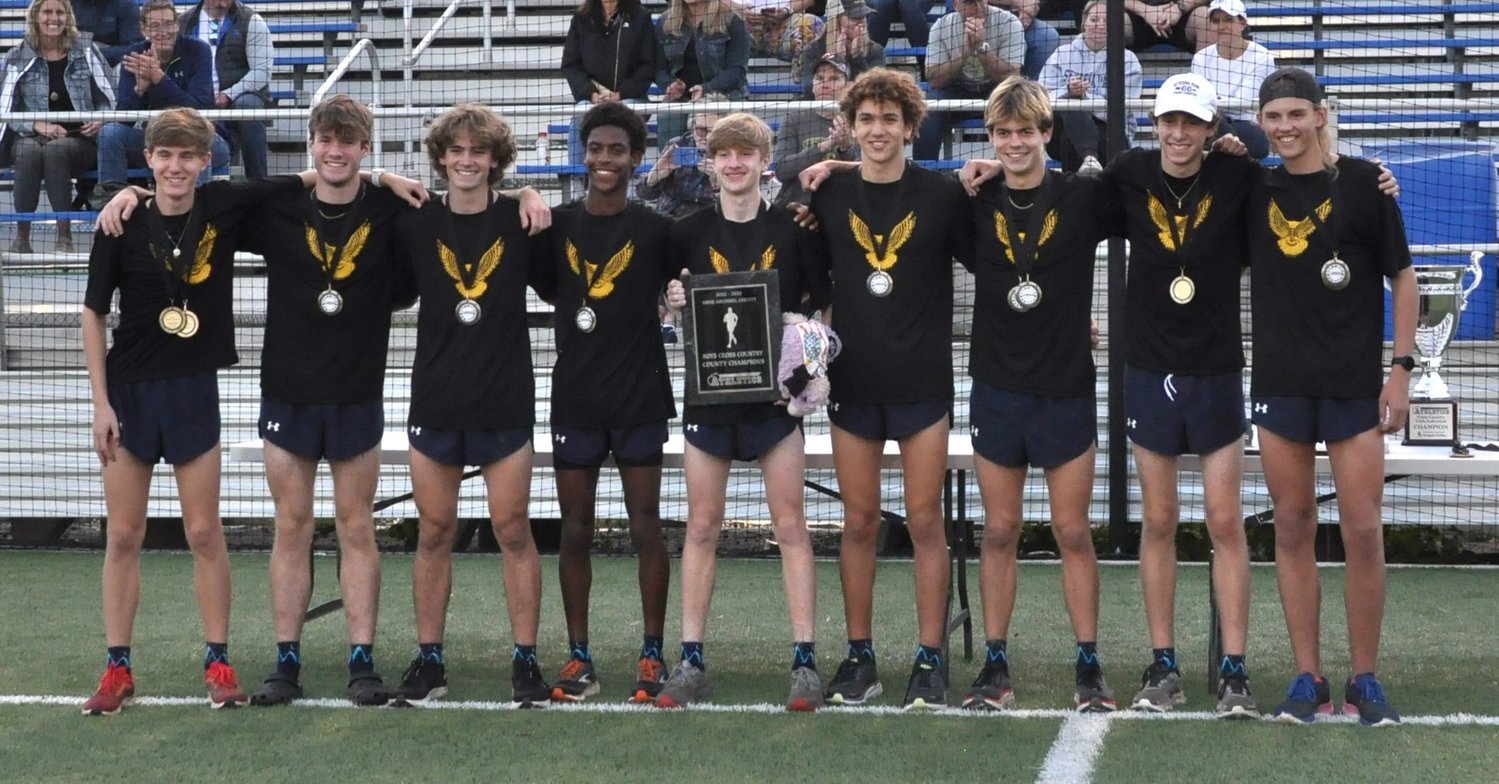 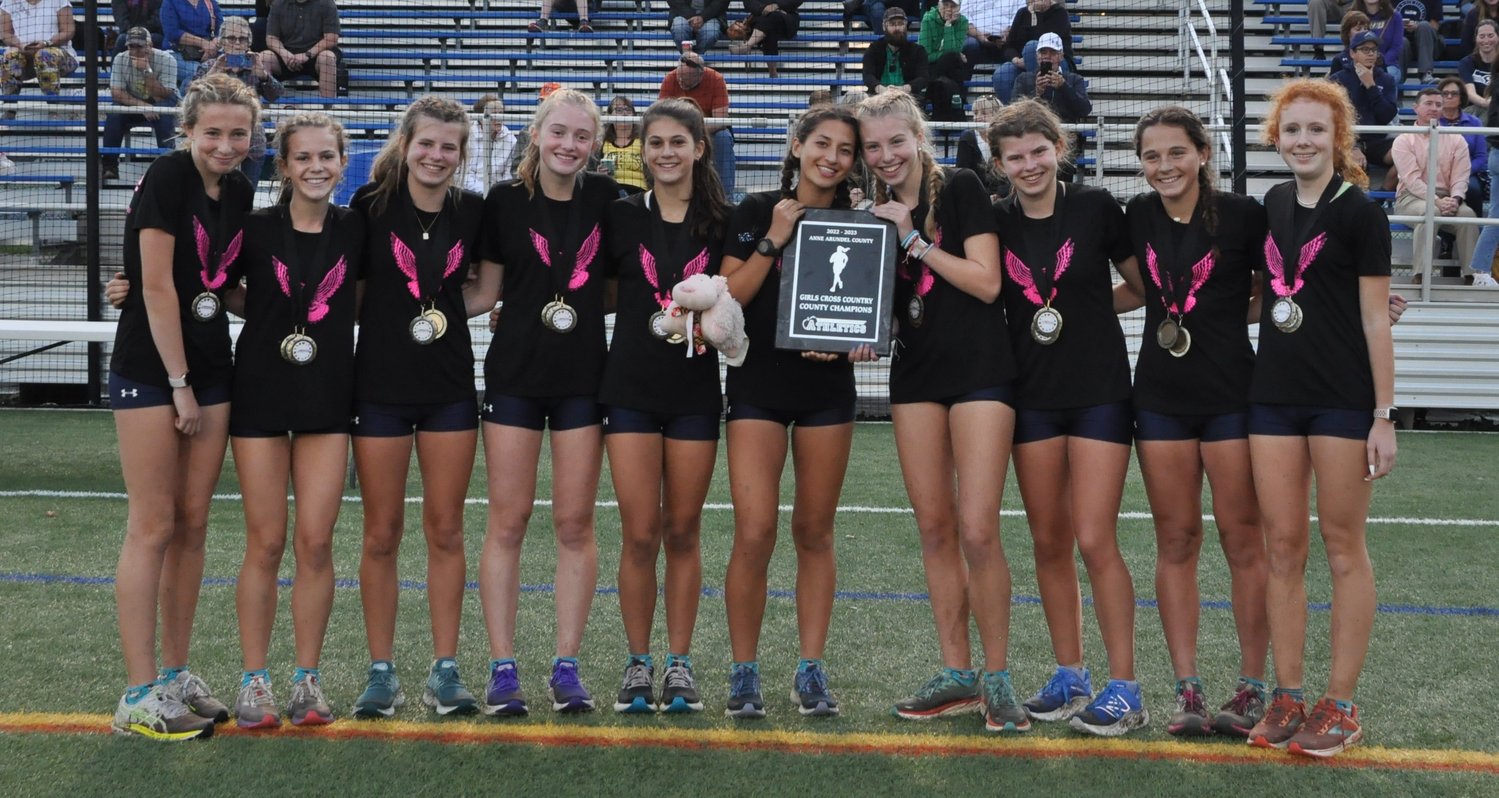 Falcons senior Cami Glebocki won the girls race with a time of 19:09.5, besting the runner-up, Broadneck’s Stephanie Costello, by more than 50 seconds.

Glebocki noted that the course was muddier than she prefers due to the area’s recent rainfall that made for tough conditions during the middle portion of the 3-mile course.

The champion didn’t take long after her county victory to start thinking about the tough competition she’ll face at the state championships, which are slated for November 12 at Hereford High School in Parkton.

“I will be working on staying with them and staying tough,” Glebocki said.

Costello said she’s pleased with her individual finish at the county championships. The Bruins senior noted that she went out too fast during the race’s opening mile and aims to work on improving her pace going forward. Despite her fatigue, Costello was able to regroup and overcome Severna Park junior Sarah Kelly with 800 meters left in the race to finish second.

Brianna Bostic, Broadneck’s cross country head coach, wasn’t as worried about Costello’s pacing, as Bostic said she told her runner to “go for it” as it was her last county championships.

Typical of the T-shirts the Falcons were donning at the race that said, “We is greater than me,” Jarvis was quick to discount his own performance, instead focusing on his teammates.

“I’m happy for the whole team,” Jarvis said. “I know we all pushed it so hard.”

Despite having just one returning athlete from last year’s Falcons boys team that won the state title, their fourth in a row, this year’s team feels they have what it takes to add some more hardware.

He said the team has built up a special chemistry and credits the Bruins second-place finish at the recent Arundel Invite as a confidence booster as they headed into the county competition.

“The amount of camaraderie you build up after running miles and miles builds a good team atmosphere,” Sterner said.

Depth was evident at the county championships for the Falcons. The Severna Park girls team dominated the leaderboard with five of the top 10 times on the day with junior Sarah Kelly, sophomore Rebecca Jimeno, junior Madison Davis and junior Kaylee Jenish joining Glebocki on the leaderboard. On the boys side, four Falcons finished in the top 10. A trio of seniors, Chris Nunn, Alex Lecouras and Cody Smith joined Jarvis among the county’s top performers.

Severna Park sophomore Caden Lazzor said it pays off to have such a talented team that works together.

“We push each other,” Lazzor said. “The guys in front of me pull me up, and I pull up the guys behind me.”

“That’s our philosophy: we do it for the other six,” said Alcombright, referencing the seven runner crews that schools will field for the upcoming races.

Jarvis said he just hopes to perform at his best at state championships, and he’ll let the chips fall into place.

“As long as I’m pushing it hard and giving 110 percent, that’s all I can do,” Jarvis said.