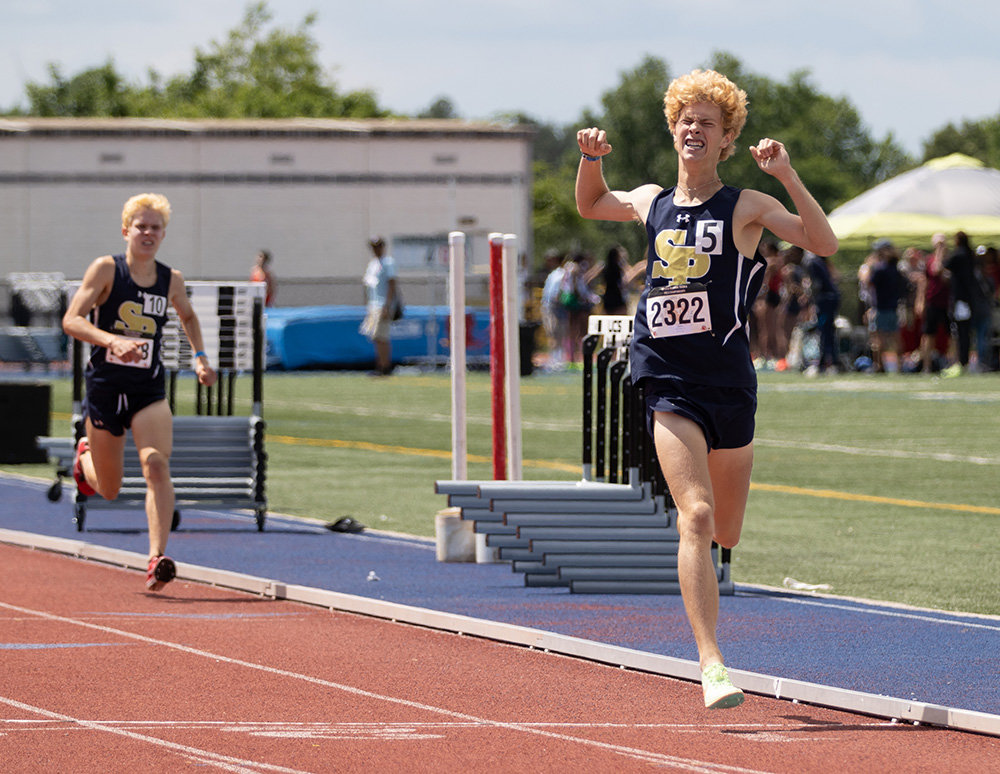 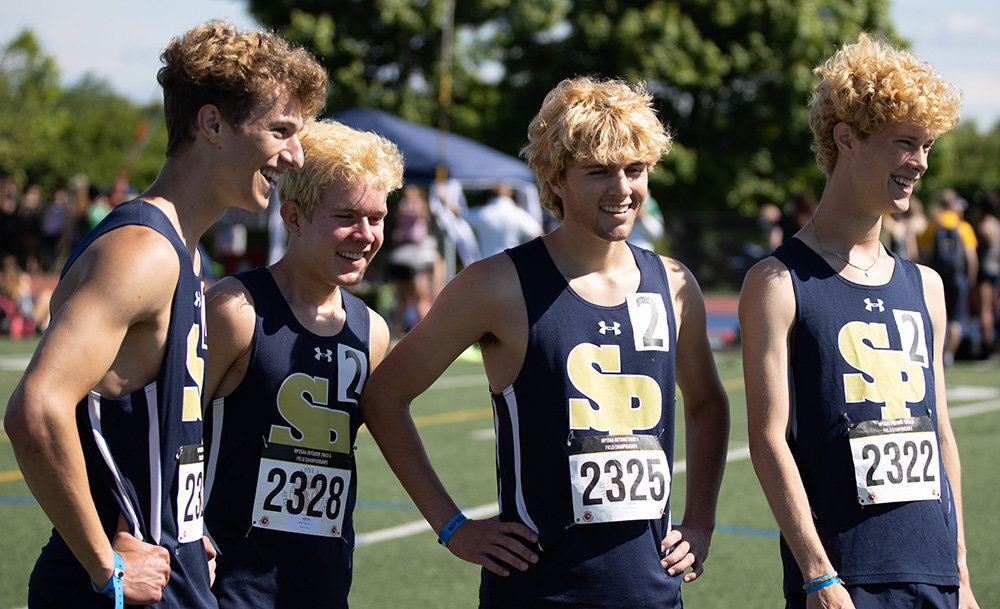 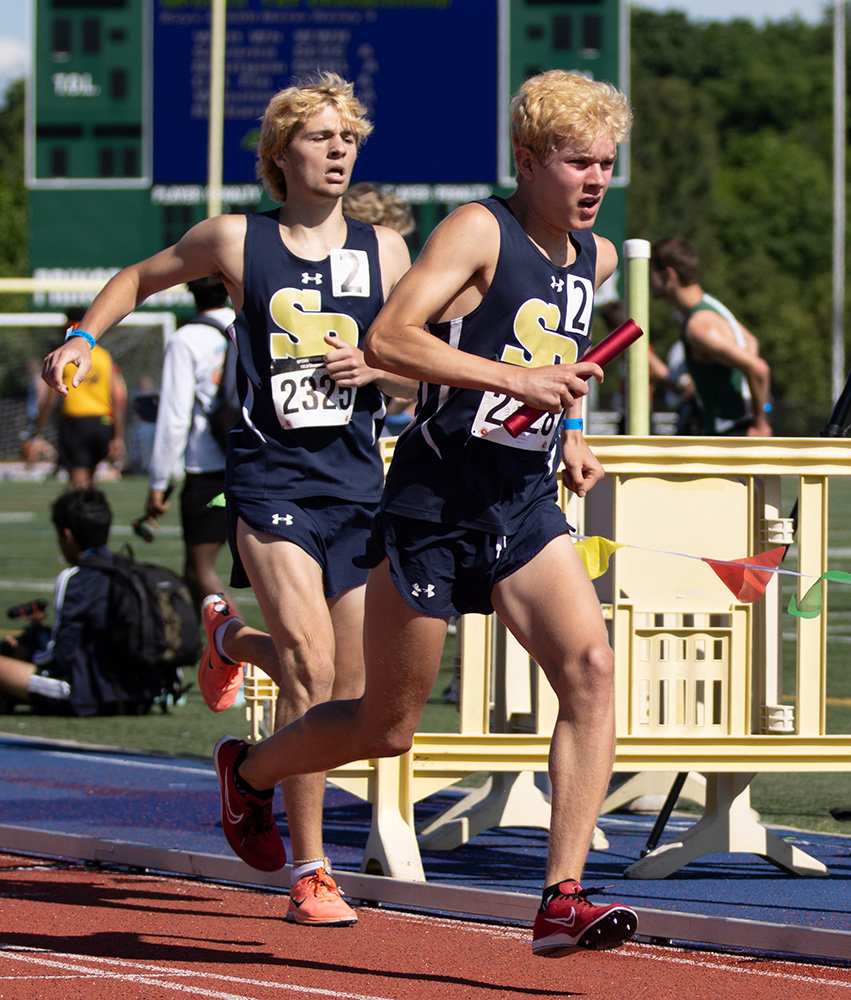 James Glebocki started his leg of the 4x800 meter relay after taking the handoff from Scott Engleman.
Photos courtesy of Naptown Studios 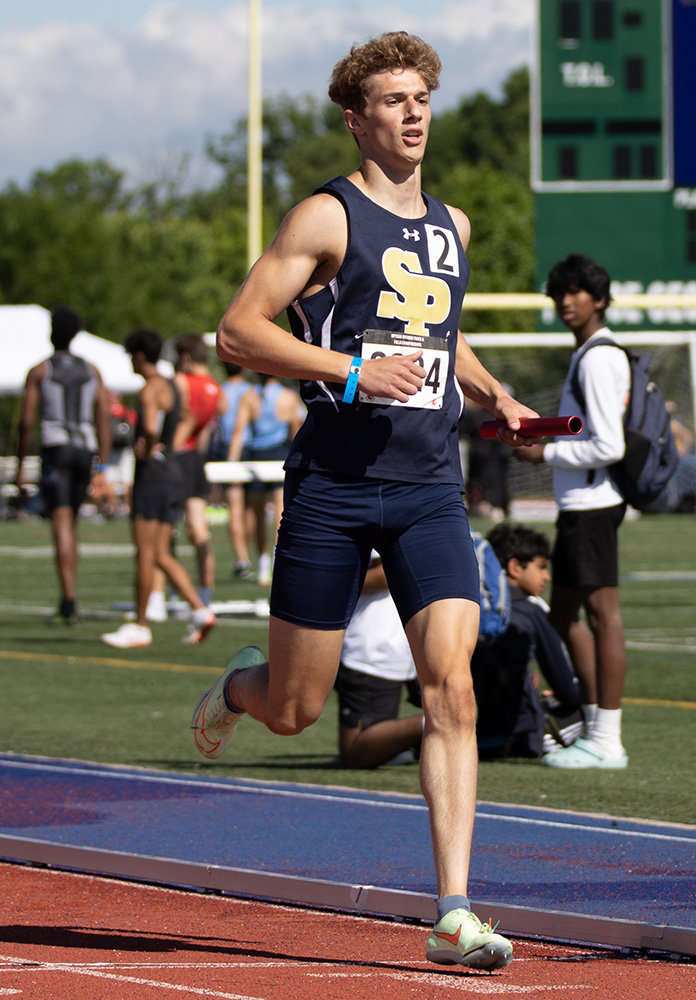 Jack DeBaugh won the boys 800-meter run and 400-meter dash during the Class 4A track and field state championship on May 28.
Photos courtesy of Naptown Studios 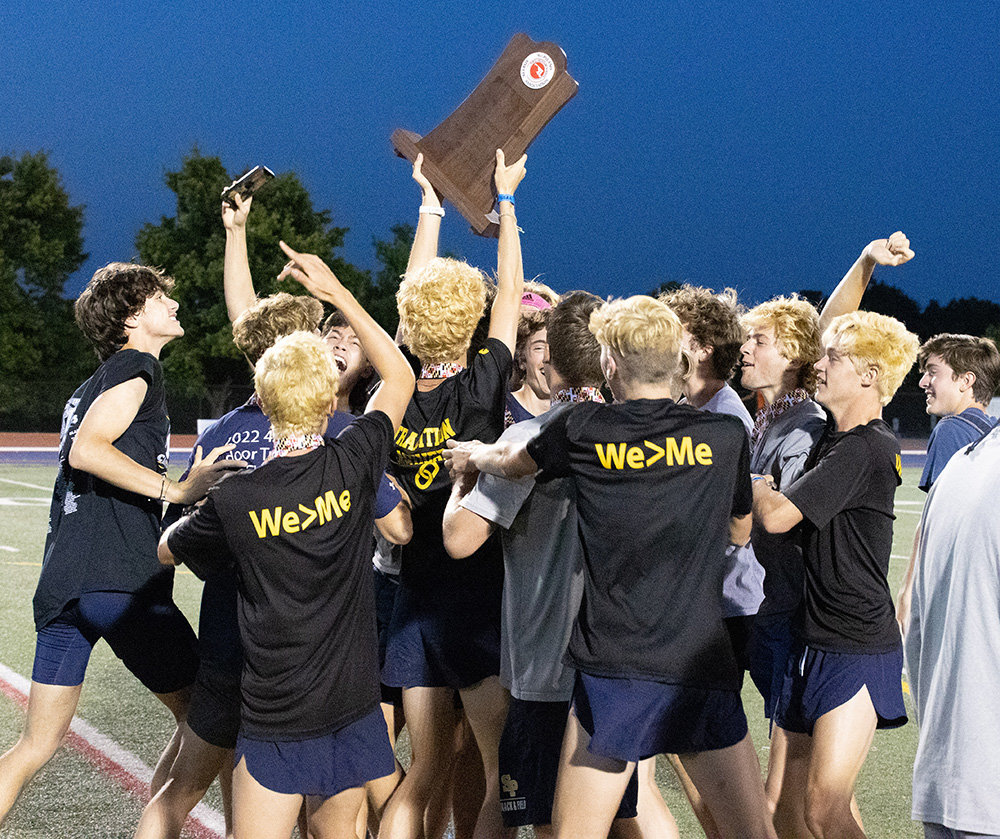 Since Class 4A was established in 1988, no Maryland school had won the triple crown of boys cross country, boys indoor track, and boys track and field championships in the same academic year. Not until May 28 when the Severna Park boys won the track and field championship at Prince George's Sports and Learning Complex, capping off that stunning feat.

“It’s interesting when you’re acing. You’re not thinking a lot,” Canaday said of his mindset during the 1600-meter run. “You’re trying to get your body to move. Halfway through, I felt pretty good and then James passed me with a pretty decisive move. We’re all competitive, so if your teammate passes you, you want to beat him.”

See more photos from the 4A championship.

With rain postponing Friday’s portion of the competition to Saturday, athletes from all schools had to be strategic in how they spent their energy because they had less rest between events.

As the anchor for Severna Park’s 4x800 relay team, DeBaugh thanked his teammates for putting him in a favorable position to clinch the race while still preserving energy for his other races. For the 400-meter dash, he gave it his all.

“The conditions were pretty windy, so I waited until the back stretch to go harder with the wind,” he said.

By the time the 800-meter dash started, he was exhausted, but he stuck to his game plan.

“When I run the 800, I like to set myself a couple places behind,” he said. “The second lap, I started to move up a little more and I made up the distance.”

DeBaugh earned or contributed to 35 of Severna Park’s 87 points. Canaday also propelled Severna Park atop the leaderboard, contributing to 21 of the team’s points.

“I always have that strongest mentality,” Canaday said. “I might not be the fastest [on that day], but I train the smartest and hardest.”

Many other Falcons fared well during the meet. John Tyler finished fourth in high jump, Keith Cingel was fifth in the 100-meter dash, Edward Sullivan took fifth in the 1600-meter run behind Canaday and Glebocki, and Liam Hagerty and Mason Siebenhaar finished fifth and sixth, respectively, in the 3200-meter run.

The team of Cingel, DeBaugh, Michael Singleton and Declan Gentile claimed fourth in the 4x200 meter relay with a time of 1:30.01.

“We obviously had a very talented group of kids, but the difference with this group is that they have the talent and they are willing to do the work,” Josh Alcombright, who coaches cross country and track and field for Severna Park. “After they won the indoor title, the whole group was all in on doing whatever it took and contributing however it worked out best for the team.

“The selflessness of the entire group is what makes them special.”

Canaday said being a part of that culture is empowering.

“You don’t see it as a freshman and you think. ‘These seniors are weird,’” Canaday said. “But then you understand. I’m part of something bigger than myself.”

DeBaugh was a 6-foot, 160-pound swimmer when he started running competitively for Severna Park last year. His swimming background has helped with his endurance.

“Swimming practices are more tiring than track because you’re meeting that resistance from the water,” he said.

Canaday trains seven days a week. He starts at 55 to 60 miles a week and tapers — lowering his mileage but running faster — by the end of spring.

As for the accomplishments, sweeping the three state competitions and winning their first indoor title in 50 years and their first outdoor title, the boys are proud of the collective sacrifices they made.

“A lot of credit goes to the distance kids,” DeBaugh said. “Most of them have been on the team since they were freshmen, all three seasons, so they have put in a lot of work. This year, the sprinters piqued, and it all came together.

“The coaches are very supportive. They push you to take initiative yourself,” DeBaugh said. “A lot of the motivation and prompting comes from the athletes, and the desire to win comes from that prompting. There is definitely a lot of talent leaving the team, but hopefully they can continue the legacy we started.”

Canaday also emphasized that all the hard work was worth the effort.

“It’s super meaningful to put our stamp on [the program] because that’s the culminating thing,” Canaday said. “It’s senior year, it’s the last chance to run in high school. It’s the closest thing to running in the Olympics or playing in a Super Bowl. It’s the best sendoff.”