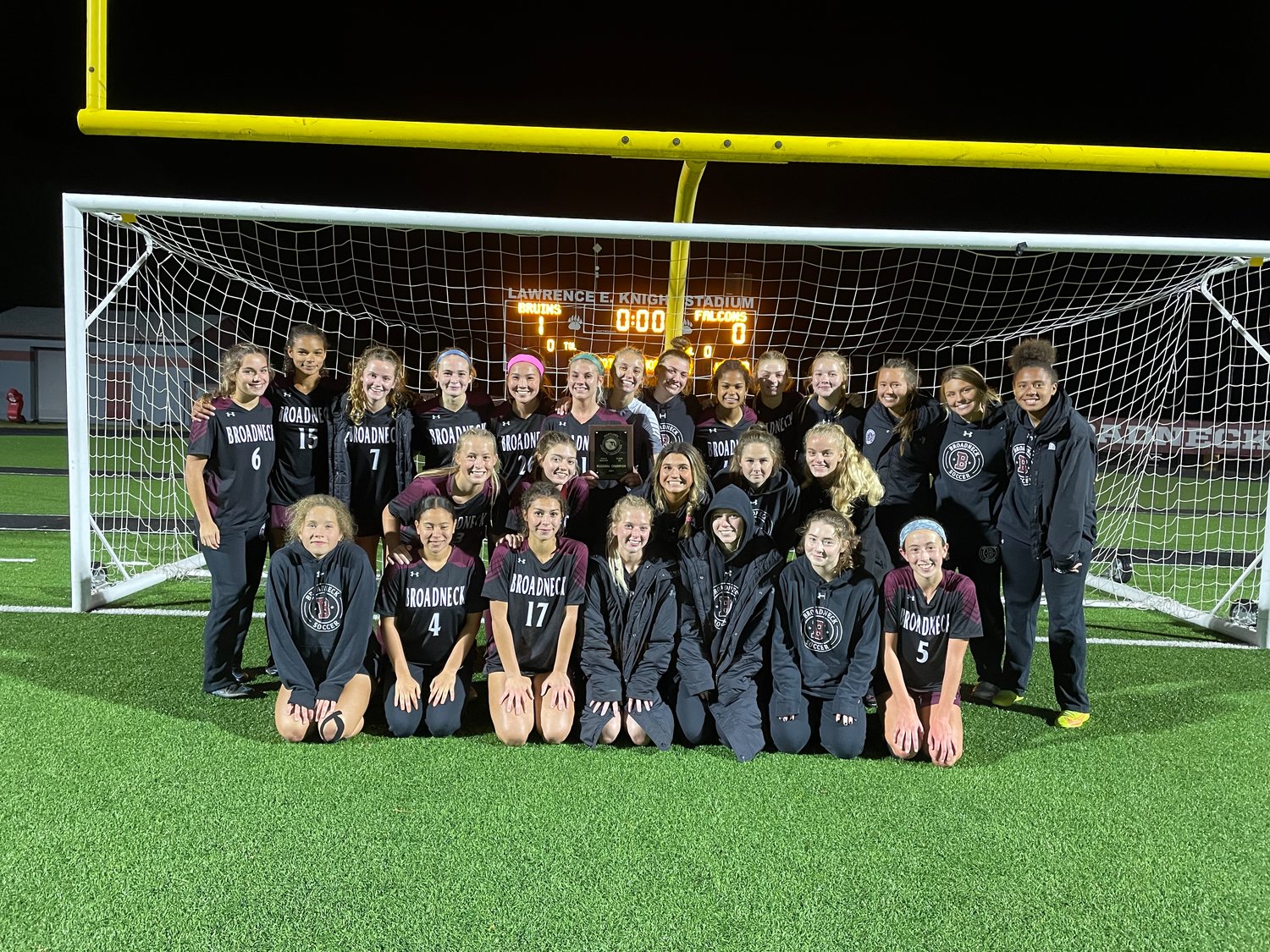 The Broadneck girls celebrated after junior Sadie Wilkinson scored the go-ahead goal to give them a 1-0 win over Severna Park.
Photo by Madeleine Stern
Posted Wednesday, November 3, 2021 7:46 am

The Severna Park boys and Broadneck girls were victorious in a pair of two region championships between rivals.

The Falcons were able to score just before halftime and then hold off a furious Broadneck attack in the second half to win one of the two Class 4A East regional championships, 2-0, on Tuesday, November 2.

In a rematch from the rain-canceled county championship, the Falcons and Bruins played tough during the first half as neither team came close to scoring until late in the first half. Falcons junior Andrew Blamphin received a nice pass along the far side of the field and crossed it to fellow junior Elliot Grieg, who was breaking toward the goal. Grieg was able to knock the ball toward the net off the cross, but the shot was stopped by Bruins senior goalkeeper Griffin Bodziak. However, Bodziak wasn’t able to hold onto the ball as it bounced off his hands back toward Grieg, who put it in the back of the net to give the visiting Falcons the lead, with less than four minutes until halftime.

Severna Park was able to put the game away when senior Kevin Breitinger scored in the 70th minute, scoring similarly to Grieg where Bodziak was unable to cleanly hold onto the ball and Breitinger was there to tap it in. The Falcons will advance to the state playoffs while the Bruins’ season has come to a tough end.

The Broadneck girls varsity soccer team became 4A East Region II champions Tuesday night and will advance to the quarterfinals of the state tournament. Broadneck faced rival Severna Park at Lawrence E. Knight Stadium. The game was evenly matched and remained scoreless until late in the second half. With seven minutes left in regulation, Broadneck senior Brianna Sawyer took advantage of a Severna Park turnover at midfield and assisted junior Sadie Wilkinson in scoring the team’s winning goal. Despite a renewed sense of urgency in the game’s remaining minutes, Severna Park was unable to get any goals past Broadneck senior goalkeeper Mason Smargissi, whose team won 1-0.