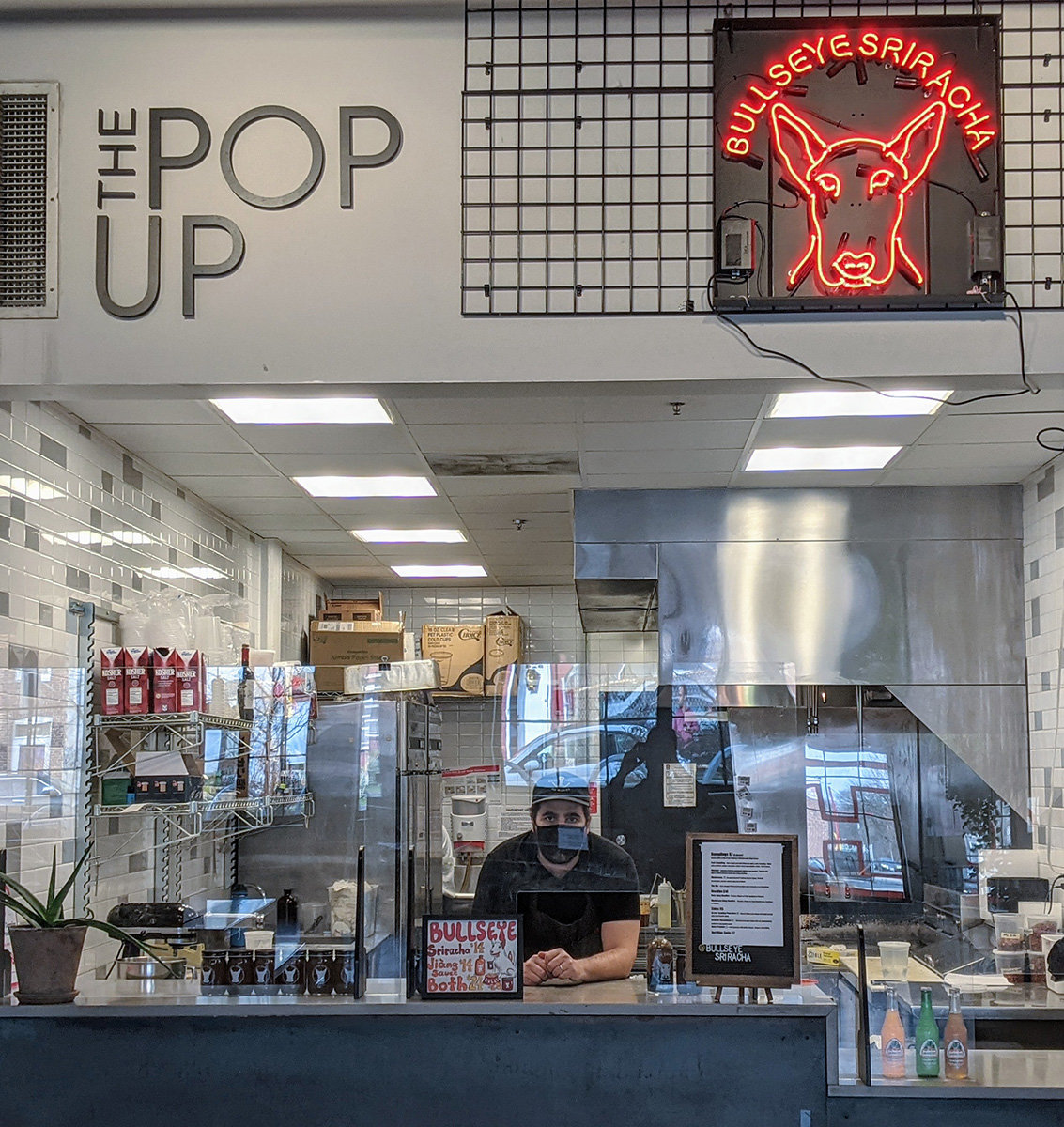 Taylor Adams and Dan Kamenetz opened a pop-up eatery at R House in the Remington neighborhood in Baltimore the day after Thanksgiving.
Photo Provided 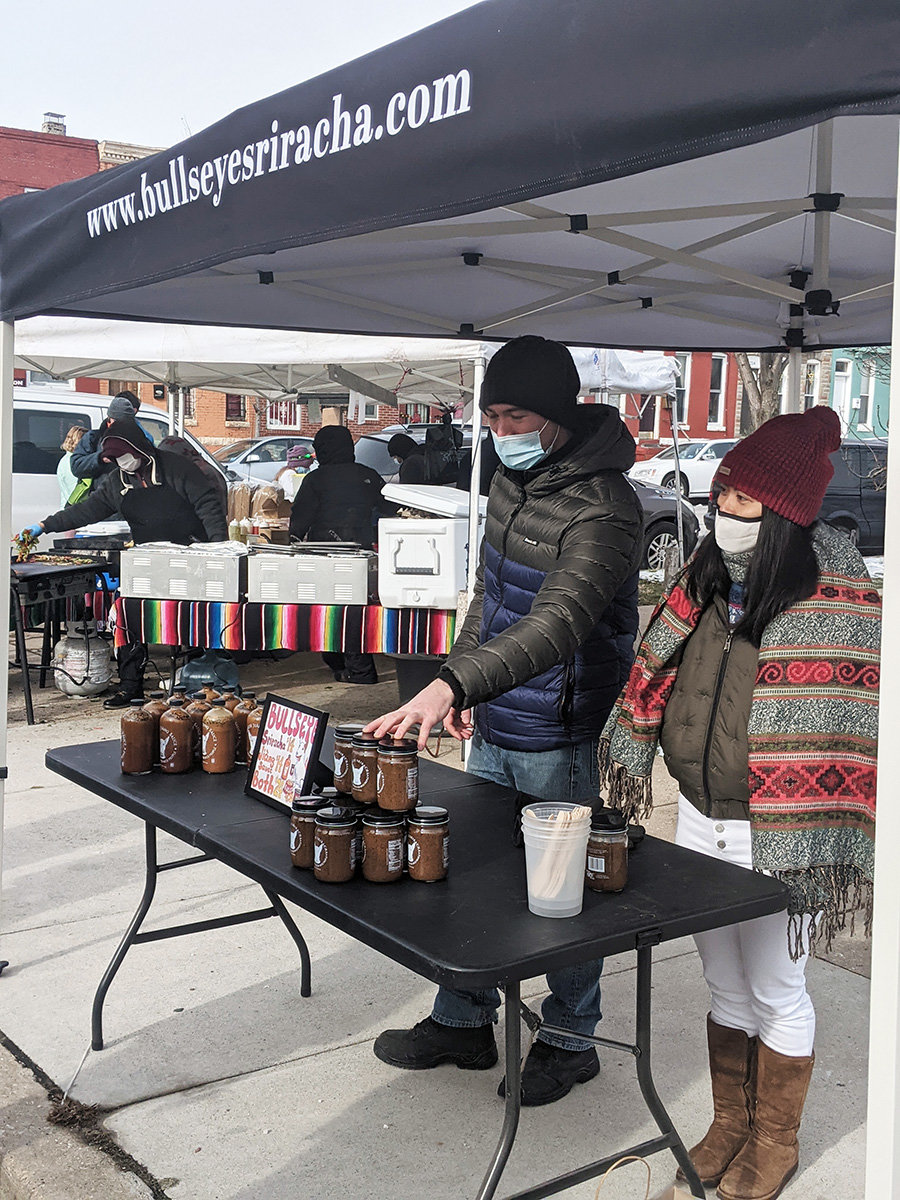 Taylor Adams and Dan Kamenetz opened a pop-up eatery at R House in the Remington neighborhood in Baltimore the day after Thanksgiving.
Photo Provided
Previous Next
Posted Tuesday, January 19, 2021 1:31 pm
By Declan Keefe

Independent businesses and restaurants cannot seem to catch a break in these times. After countless COVID shutdowns, starting a small business may seem like heading up a creek without a paddle. Nevertheless, two Severna Park natives, Taylor Adams and Dan Kamenetz, are overcoming the odds and getting started on their dream by creating a new company: Bullseye Sriracha.

Adams has been in the restaurant business his entire career since he started working at Ledo Pizza at age 15. Following his time at Ledo, he moved next door in Park Plaza to Cynthia’s. Realizing his passion for cooking, Adams pursued his dreams for cuisine by attending the prestigious Culinary Institute of America (CIA) in Hyde Park, New York. Following his graduation from CIA, Adams spent the next 10 years working at numerous exalted restaurants in Brooklyn, New York, including The Meat Hook, Pok Pok NY, the Glasserie, and most recently, Chef de Cuisine at EMILY.

“I’ve never not worked in a restaurant,” Adams said about his love of the industry. “It’s the only thing I can imagine myself doing.”

Two years ago, Adams started creating sauces in his Brooklyn apartment, where Bullseye Sriracha was born. After sampling his sauce with friends and customers, Adams sensed a potential hit was on his hands. Adams recruited his good friend from Severna Park High School, Kamenetz, who was now in the real estate profession, to be his business partner. Together, they launched a Kickstarter campaign and raised $10,000. When the lockdown in March 2020 put a screeching halt to the restaurant business, Adams was laid off, so he and his family moved back to Baltimore.

Although the sauce was originally intended to be in production earlier this year, Adams and Kamenetz paused making it due to the pandemic. In September, a Randallstown company agreed to manufacture the sauce, and Bullseye Sriracha development began. Adams proudly proclaims on the company’s website, “Our goal was simple: create a well-balanced, super flavorful hot sauce that gave your food more than just heat.” The company’s logo and mascot are none other than Adams’ pet dog Bull Terrier, Bullseye.

In addition to this milestone, Adams and Kamenetz opened a pop-up eatery at R House in the Remington neighborhood in Baltimore the day after Thanksgiving. Menu items include dumplings, scallion pancakes, noodles and salads. Opening was a difficult decision.

“It’s a time when lots of places are closing and we are opening,” Kamenetz said.

The duo is currently working on a contract extension to keep the cafe open until the end of January. The next step is to sell the sauce to other restaurants.

As word spreads about Bullseye Sriracha, Adams and Kamenetz are finally accomplishing their dream of starting a business together.

“I’m very lucky to have a close friend that I’ve known for half of my life as a business partner,” Kamenetz said. “I believe so much in this company.”