Severna Park Gets Past Meade 27-20 In Football Opener 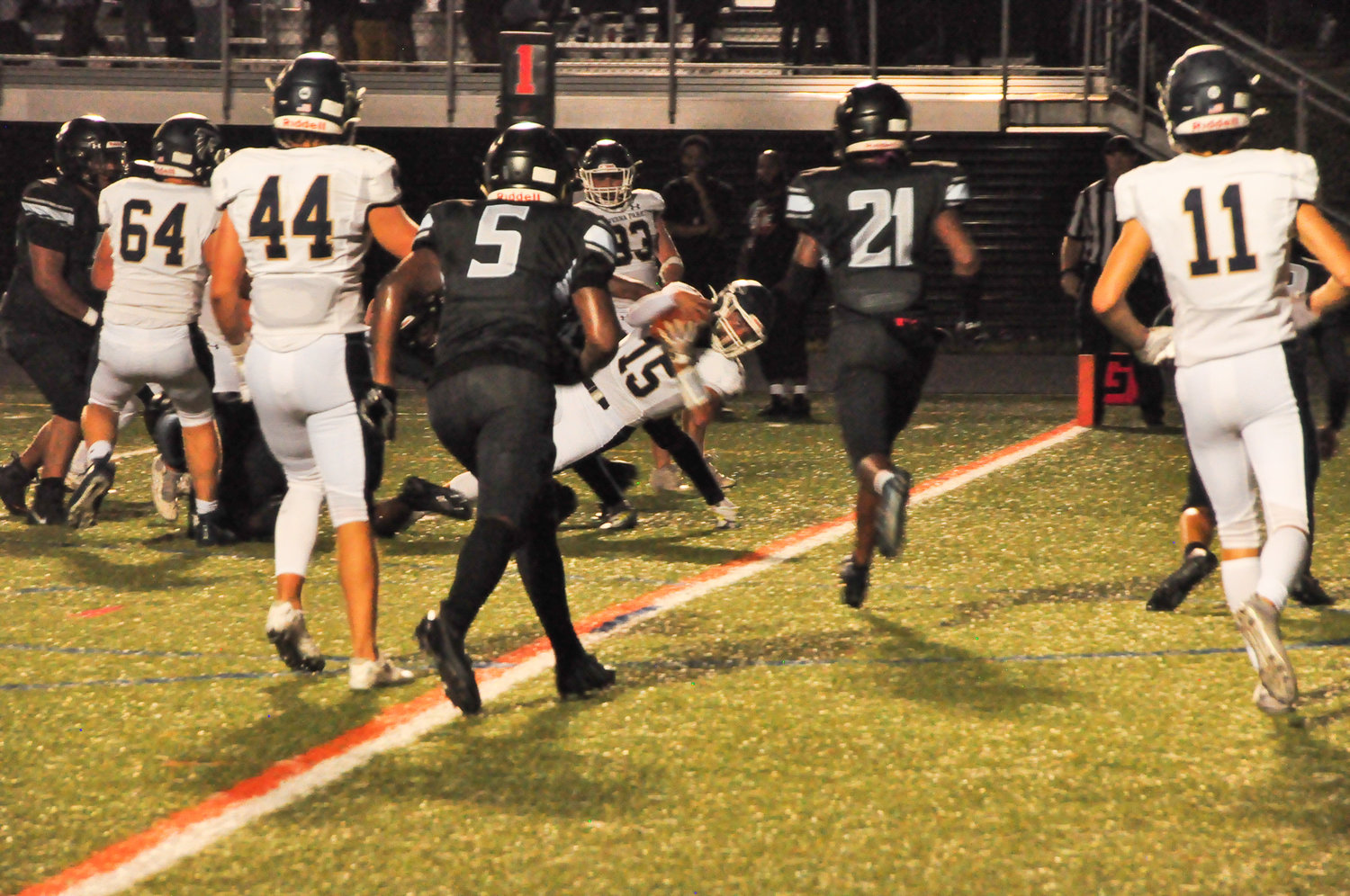 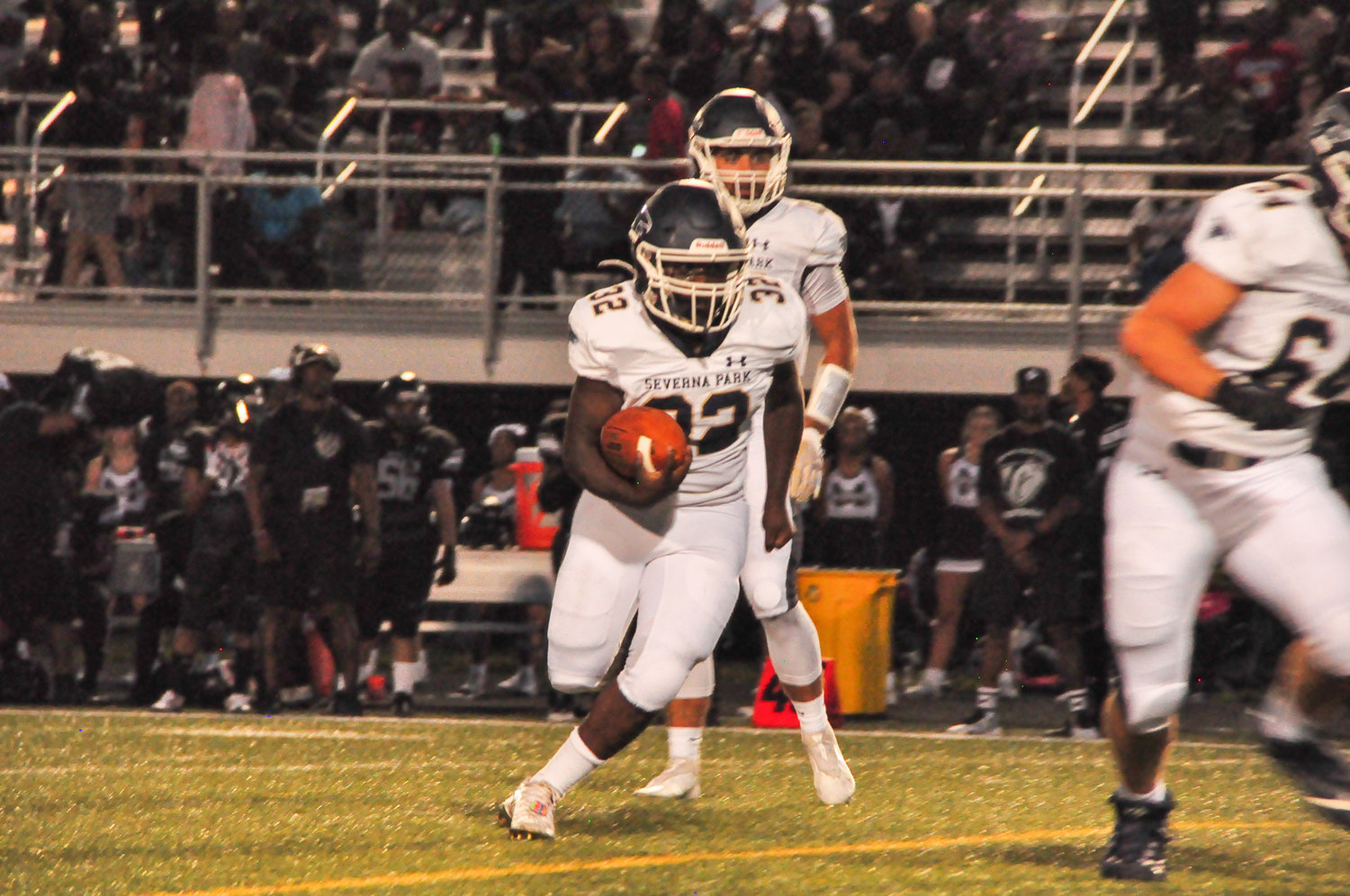 Ruben DeNeal-Eldridge took a handoff late in the game against Meade.
Photos by Conor Doherty
Previous Next
Posted Saturday, September 3, 2022 12:00 am
By Conor Doherty

Coming off their best season in over a decade, Severna Park traveled to play the Meade Mustangs to open the 2022 football season and hung on for a 27-20 win.

The game was a story of two halves as the first was a back-and-forth scoring feast while the second was a much more methodical and slower half.

Meade got the game going with some quick fireworks as they scored less than two minutes into the game on a 45-yard touchdown pass. The Falcons responded with a long touchdown pass of their own, from 31 yards out just four minutes later. All three of Meade’s scores came on long kickoff returns including an 80-yard return for a touchdown right before halftime that brought the Mustangs within 1 after the Falcons had scored a 5-yard rushing touchdown.

The Falcons offense was led by the rushing attack, particularly starting quarterback Seamus Patenaude. On a 59-yard touchdown run, he ran over a cornerback in the open field on his way to the end zone. Patenaude routinely slipped past or dragged defenders as he picked up crucial yards after contact and scored three times on the ground.

Freshman running back Ruben DeNeal-Eldridge, called up from the JV team due to injuries to the Falcons top two RBs, and senior Camden Webb, complemented Patenaude in the running game, as they grinded out chunks of yardage. In total, the Falcons rushed for 273 yards, led by Patenaude’s 136 yards.

“We’ve always had a very good run game,” Patenaude said. “We have some big, aggressive runners in Cam and Ruben, stepping up. Ruben’s done a great job and I’m really proud of him, and they’re two great guys to run behind. I always feel safe behind them.”

After giving up the kick return touchdown to end the first half, the Falcons held Meade scoreless in the second half. Up 21-20 at halftime, the Falcons sealed the game on a 1-yard rushing touchdown by Patenaude, finishing off a drive that took nearly nine minutes off the clock and lasted from midway through the third quarter to just over halfway through the fourth quarter. Not to be outdone, the Falcons’ defense came up with several big stops in the second half including a 4th-and-short attempt from the Mustangs with less than five minutes left in the game. The Falcons were then able to run out the clock to clinch the win.

“I couldn’t be prouder of my guys,” said Falcons head coach Mike Wright. “Just battling back each time, especially after those kickoff returns. Those can be so demoralizing, so for my guys to bounce back from that, I was just so proud of them.”

The Falcons next game was on the road at Crofton on September 9. Their first home game of the season isn’t until September 23 against Chesapeake.