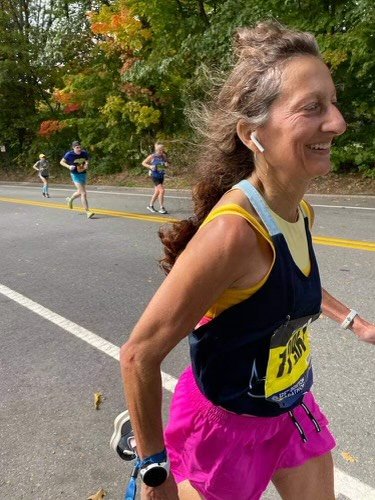 After being canceled in 2020, the 125th Boston Marathon returned on October 11 to the delight of Bostonians and runners from around the globe. Christina Morganti from Severna Park was one of the 20,000 athletes gathered under the partly cloudy sky and mid-60s temperatures for the first staggered start in race history.

The 2021 Boston Marathon wasn’t Morganti’s first marathon; she had run in several over the years but said it had been about a decade since her last one. In 2019, she ran the qualifying marathon for the 2020 Boston Marathon, which was ultimately canceled.

“I just love Boston, and the marathon is the oldest in the U.S. with lots of tradition,” Morganti said. “It’s kind of cool because you have to qualify, so it’s a nice goal to aim for.”

Her training for the Boston Marathon began in June, during which time she suffered a broken little toe and “a couple sprained body parts after a fall.” She admits it wasn’t the best for training, but said, “No way was I going to miss this; it was supposed to be April 20, 2020.”

Now at an age where injuries could slow her down, Morganti, an orthopedic surgeon and sports medicine specialist, is acutely aware of her body and makes sure to listen when it hurts. “If I get a little ache or pain, I’m all over it … ice, taping, stretching, and a day off until it cools off,” she said.

“I try to keep my running consistent and take few days off. I do take at least one day a week off when I don’t really exercise,” Morganti continued. “I try to make sure I do my strength training and stretching, eat healthy, and change out my running shoes every few months.”

She added that she loves being outside, moving and being in shape. Running provides her with some needed “alone time,” but she has also forged great friendships through running.

“There’s no better way to get to know someone than to run with them. So many of my friendships were made from running,” Morganti added. “I’m lucky I can still do it; lots of stuff can happen that makes it hard to run.”

Held every year on Patriots’ Day, a Massachusetts state holiday when schools and many businesses are closed and locals come to watch the marathon, the race was surrounded by a “magical” atmosphere, Morganti explained.

“It was all so positive, you would not believe it,” she added, noting that she thinks even more people have come out in support of the runners and the city of Boston since the 2013 bombing near the finish line. “And with it canceled last year, there was a lot of pent-up excitement. Everyone we passed would yell, ‘Welcome back!’ There are lots of colleges along the route that have off and students come out to party. The entire 26.2 miles were lined with happy cheering people. It was just awesome.”

Morganti said her finish time was the worst time she ever posted and the earliest that she had “crashed.” However, “probably the most fun I’ve ever had because of the totally awesome positive vibe,” she added. “Hopefully my time was good enough to qualify for next year so I can go back and have fun but still run decent.”

Morganti is married to Jeff Gelfand and is a mother of four children, including Jake Gelfand, the 2020-2021 Gatorade Maryland Cross Country Player of the Year who is currently on the Cornell University men’s cross country team.