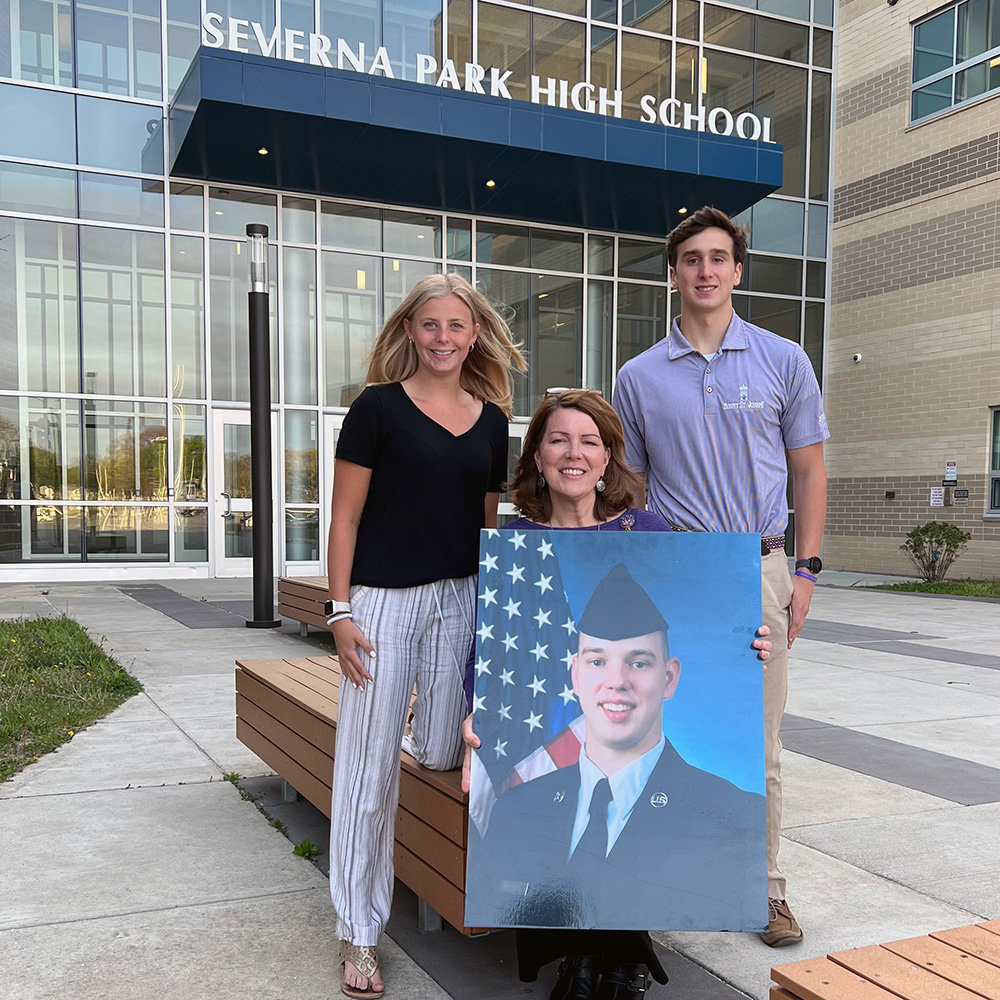 Nathaniel McDavitt, a 2011 graduate of Severna Park High School, enlisted in the United States Air Force in 2014 with the goal to be a crew chief responsible for maintaining fighter jets. He became known as Airman First Class Nathaniel McDavitt, an F-16 Fighting Falcon tactical aircraft maintainer with the 52nd Equipment Maintenance Squadron.

Stationed in Germany, McDavitt deployed to the Middle East on April 9, 2016. The following day he was working in a building when a severe windstorm caused it to collapse. He was immediately transported to a hospital but succumbed to his injuries on April 15, 2016, with his mother, father and wife by his side.

McDavitt’s mother, Jeanette Middleton-Sudano, said that her son lived every day to the fullest. In 2017, she established the A1C Nathaniel H. McDavitt Memorial Scholarship Fund. Over the past six years, her family continues to be consoled by the stories recounted about McDavitt’s “all in” service and commitment to his country, community, family, friends and fellow airmen.

On April 12, 2022, just days before the sixth anniversary of her son’s tragic death, Sudano, along with the board of directors of the A1C Nathaniel H. McDavitt Memorial Scholarship Fund, announced three recipients of the Airman First Class Nathaniel H. McDavitt Memorial Scholarship Award, presented to graduating high school seniors who have demonstrated exemplary qualities of character, drive and service — qualities that defined the essence of her late son.

Sydney Rowe did not have the honor of knowing McDavitt, but after reading about his accomplishments during his short life, she was immediately inspired.

“I loved to hear that Nathan was ‘all in’ with everything he did, even when things were not easy for him,” Sydney said. “I was inspired by his service and character. He volunteered in our community and enlisted to serve and protect our country. I have so much respect for those who serve in the military.”

“I think some [young] people may look at community service and volunteering as something they have to do to get into colleges or meet requirements for the honor society,” Sydney said. “But I have learned by volunteering in my community that service makes me happy, and I enjoy helping people. I try to make a difference, even if it is small because it can add up to bigger changes for a greater good.”

Sydney will attend the University of Lynchburg in Virginia where she will play field hockey and study for a career in nursing.

Peter Monaco knew McDavitt’s story through their common church, St. John the Evangelist. He has given back to his community through volunteering at church to teach religious education, and through his Boy Scout troop. Other volunteer efforts have included the homeless shelter Our Daily Bread in Baltimore through Mount St. Joseph and Giving Back, Linda’s Legacy.

“I am humbled to be awarded this scholarship and I aspire to live up to Nathan’s legacy of character, drive and service,” Peter said. “What intrigued me the most about Nathan’s life was the passion he exhibited in all of his pursuits in the way that he was always trying to help other people and make the world a better place, which is something we should all strive to do.”

Peter will attend The Citadel in Charleston, South Carolina, where he will major in intelligence and security studies, and join the Marine Corps ROTC unit.

“Please join me in congratulating these outstanding young adults. Their character, drive and service are things we all can be proud of, especially my Nate,” Middleton-Sudano said. “It’s difficult to express in words all the many emotions of this journey, but my heart is lifted knowing my Nate continues to live on through them.”