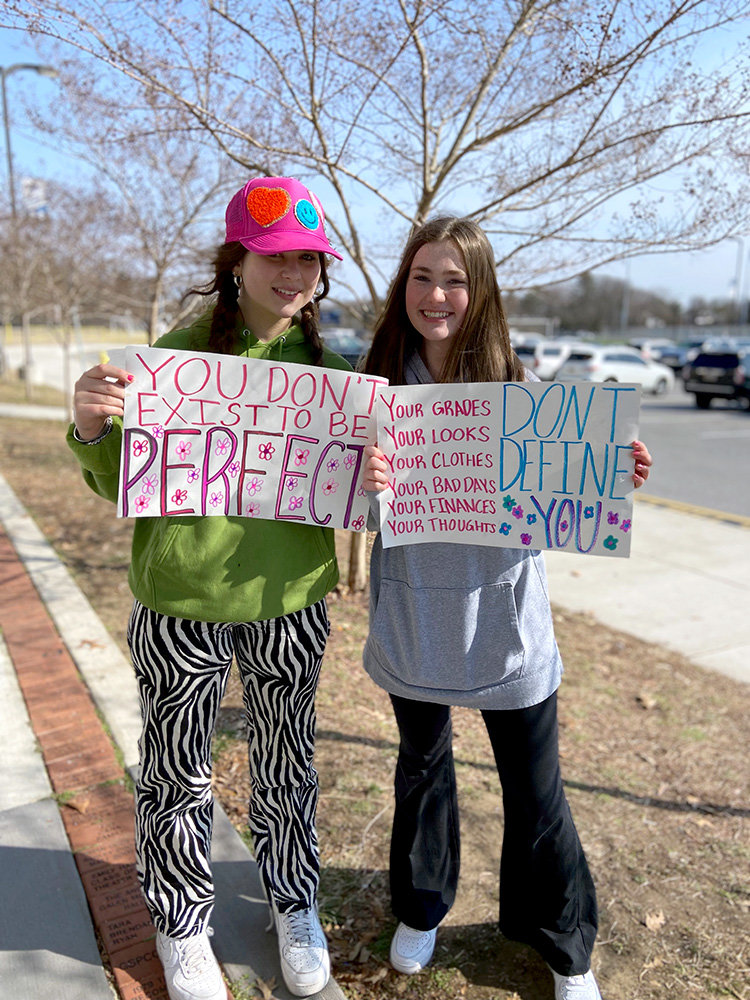 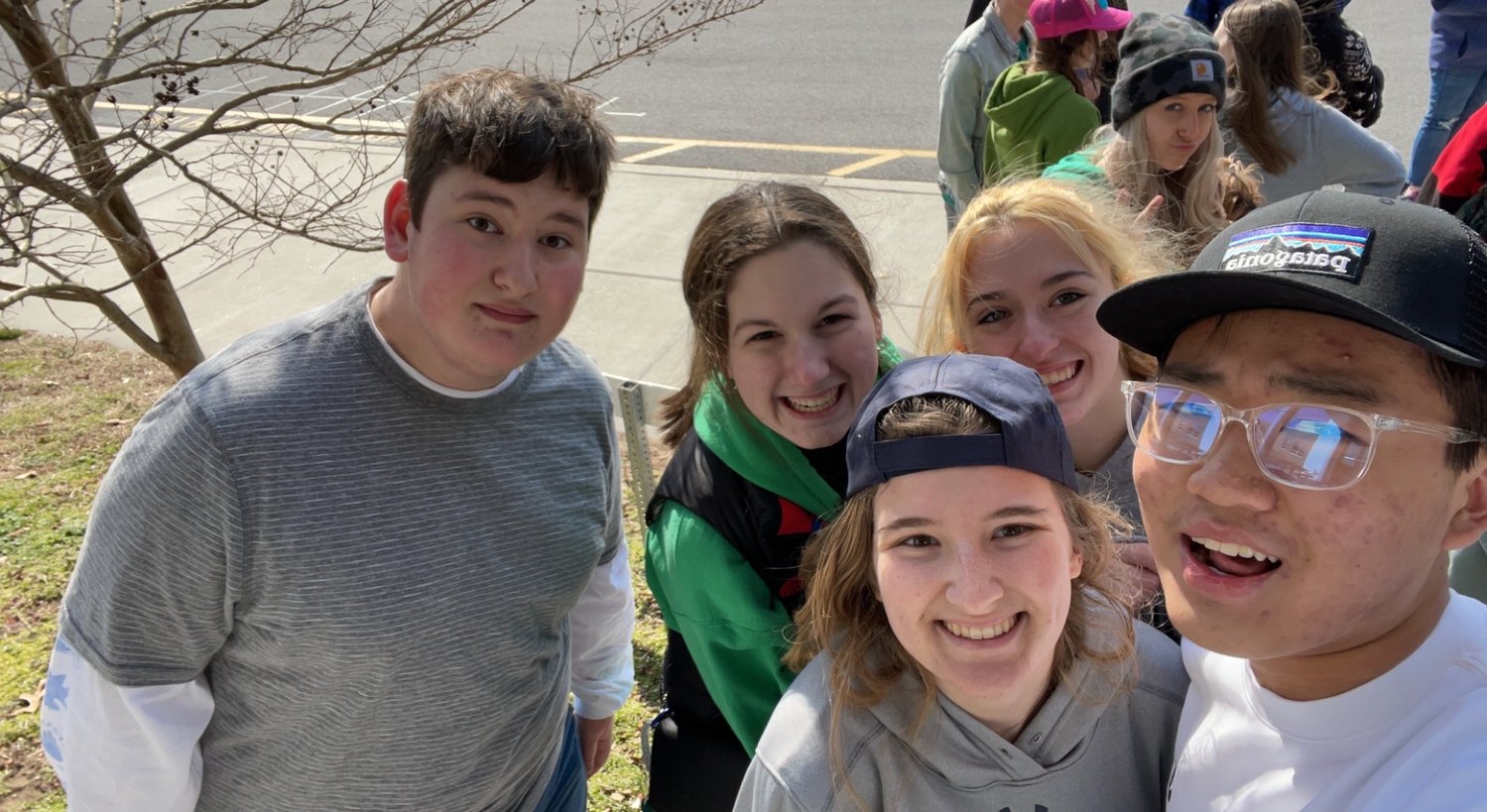 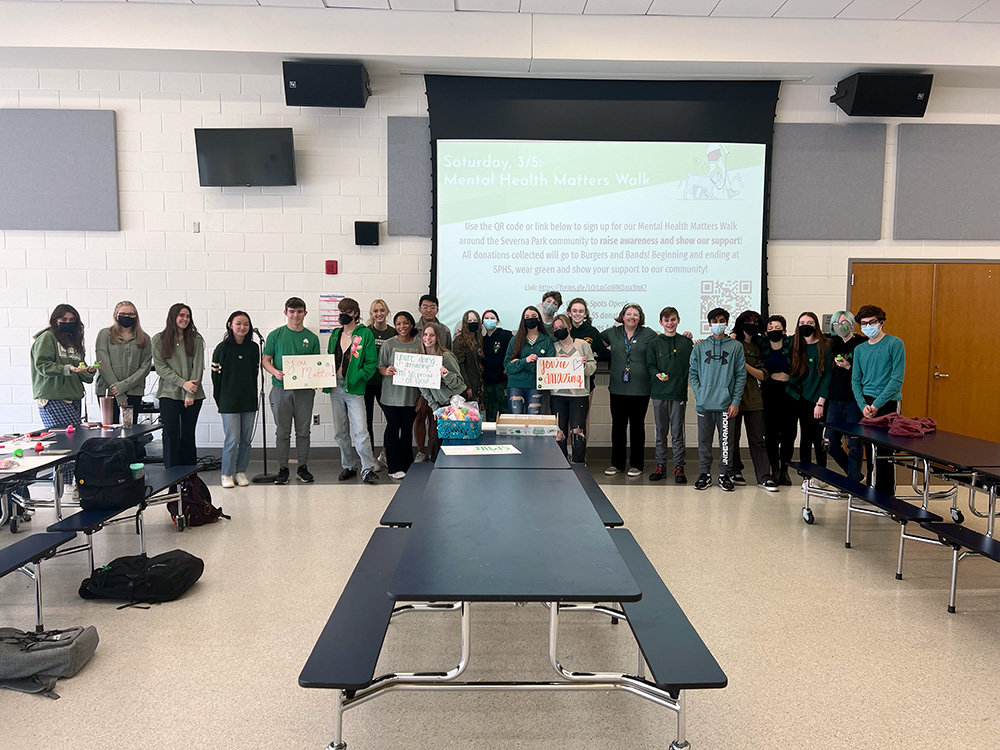 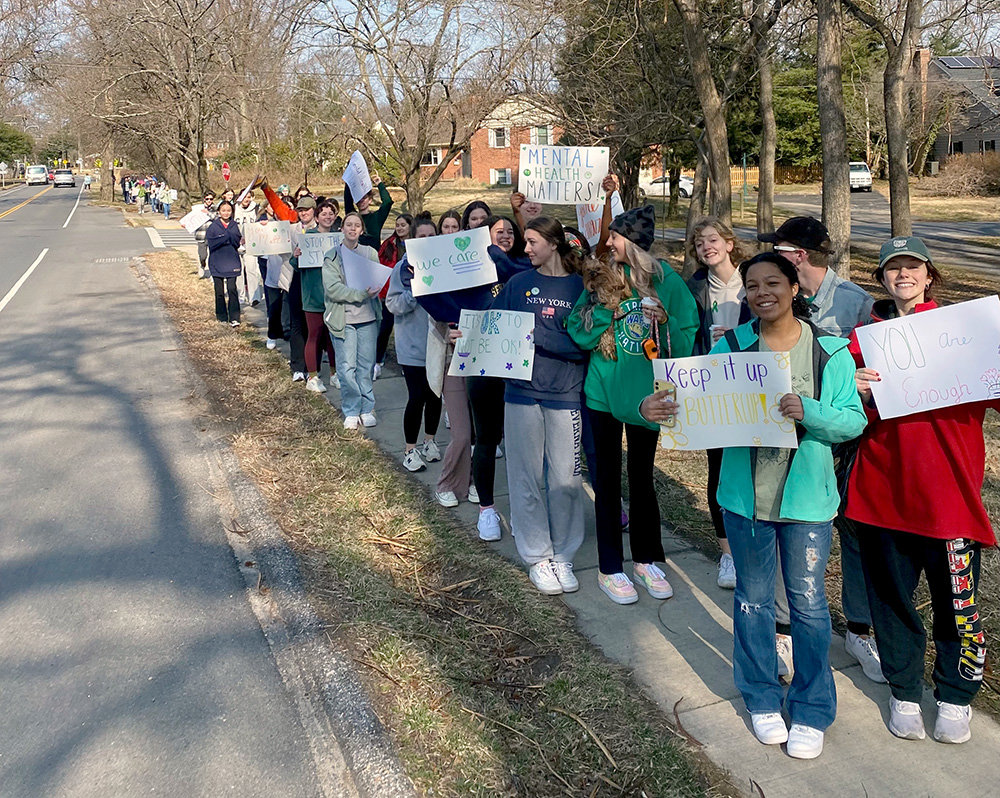 Mental Health Awareness Week ended with a walk around the community on March 5. An estimated 75 to 80 students attended the walk.
Photos Provided
Previous Next
Posted Wednesday, March 16, 2022 10:47 am
What They Said

"Mental health is something that everyone struggles with, especially teens, especially in Severna Park where we have a disproportionate amount of death by suicide. And I feel like right now, it’s largely needed in a semi-post-virtual schooling environment. A lot of freshman and sophomores are not taking the jump from middle school to high school well, juniors are being catapulted into a year full of rigor and life-determining steps they didn’t have to think about before COVID, and seniors have to deal with college applications and acceptances where, before COVID, they didn’t necessarily have to figure it all out.

"For a lot of people, it feels like they’re in quicksand, and still, the more they work or push themselves, the faster they fall. I have dealt with that feeling, and as a succeeding junior at Severna Park High School, I wanted to tell them that there are resources right under their noses that could help them. I guess my purpose was to tell my fellow students that these thoughts are totally normal, but still worthy of help."

"I’m very grateful that a light has begun shining on mental health; this is long overdue. Mental health is a cause I’ve always been passionate about, and I believe it deserves much more attention in this community. It’s inspiring to see students take matters into their own hands after this issue has been swept under the rug for far too long."

"By getting involved, I knew that I could create a week where students could let go a little and not feel as overwhelmed. From fun activities during school to our walk through the community, the week was an amazing opportunity to bring students closer together! My role in planning and leading the event was working with my co-leader, Eric, to create the themes for each day of the week, get staff involved, increase student participation, plan the activities, and much more."

Students at Severna Park High School took the issue of mental health into their own hands during the week of February 28 to March 5, planning the school’s inaugural Mental Health Awareness Week.

“Historically, we [as a society] don’t like talking about mental health,” said sophomore Eric Lin, an executive staffer with the school’s Student Government Association (SGA). “We wanted to let students know it’s OK if they’re not feeling OK.”

“We wanted to show that we, as a community, all support one another,” Eric said.

Senior Addison Garrett explained how every day of the week offered activities that made students feel good.

“They weren’t about competition or meeting expectations,” Addison said. “They were simply ways to laugh and find a release throughout the day with others. In a community with such a high standard, we need to continue to incorporate these little moments of freedom to take a look around and see all the goodness around us.”

The week of activities ended with a walk around Severna Park on Saturday to raise awareness.

Eric estimated that 75 to 80 students attended the walk, along with four or five parents.

“There is much more we need to do, but I hope this one act will cause change,” said junior Isabella Suhar, who was responsible for gathering food and drinks for the participants. “I am so thankful to our local Starbucks and Donut Shack for their donations! With their contributions, we were able to have coffee, water, doughnuts and pastries on the morning of the walk.”

The week was made possible by many students in addition to those business partners.

Sophomore Athena Vangraefschepe was tasked with connecting the SGA to the organization Burgers & Bands For Suicide Prevention and making sure the wristbands got made.

“I feel like the whole message of the week is so important today and everyone’s always talking about how we need to take more action to help our mental health, and nobody really does much about it,” she said, “and getting involved in the week allowed me to be a part of something to spread the important message of mental health awareness.”

Sophomore Samira Ibrahim got involved to “bring to light a situation that is often concealed.”

“We were given the opportunity to not only help the community but also ourselves and give us an outlet to have fun and share experiences, which I feel is often forgotten about,” Samira said. “It was an enjoyable time with people who cared and wanted to make a difference, which was what made these events so important and touching because anyone could have needed those days to help them out.”

Students plan to host Mental Health Awareness Week again next year, but in the meantime, they want their peers to know that help is always available.

“When someone feels depressed or sad, they might feel like it makes them appear weak,” Eric said. “They don’t know that other people have gone through the same experience.

“If they ever have issues or want to talk to someone, they should reach out to a counselor, a parent or someone they can trust,” he said.

Parents can also be supportive and look for warning signs such as a person talking about feeling hopeless or having no purpose, increased anxiety or agitation, not getting sleep or feeling withdrawn, to name a few.