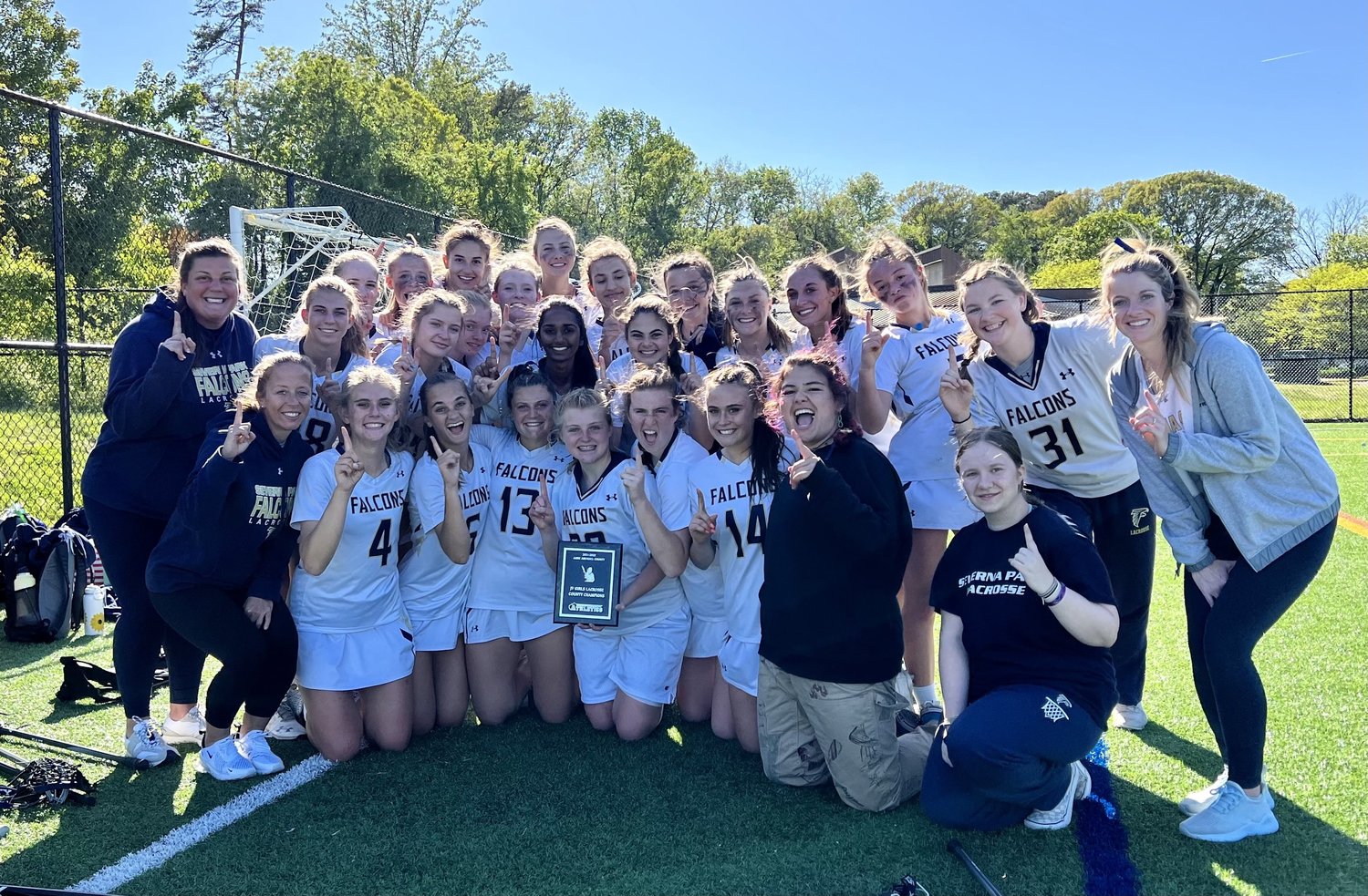 The Falcons JV girls lacrosse team capped a storybook season this spring after going 13-0 and winning their first county championship.

Severna Park opened the season against Glenelg, which head coach Annie Houghton called the toughest opponent of the season. The Falcons won 8-4.

“Our team clicked right from the start,” Houghton said. “Allison Schiavone had an amazing day in the cage and ended with nine huge saves. Ryn Feemster led our defense with three caused turnovers while Ava Zimmerman, Cami Carr and Payton Jeffers had two apiece. Offensively, Erin Hussey made her freshman debut, one for the books, with three goals, two assists and two draw controls. Kate Evans scored two goals that game while Kate Griner, Ava Zimmerman and Payton Jeffers each tallied their first high school goals as well.”

Against Annapolis, Sara Kreis had three goals and an assist while Maya Vernugopal, Noel Stefancik, Kiera Abere and Josie Crockett each scored their first goals of the season. Kaylee Gerber also made her debut in the cage and made her first career save in the Annapolis game.

Good Counsel, a new team added to Severna Park’s schedule this year, led the Falcons 6-5 at the half.

“During halftime, we regrouped and focused on what we needed to change,” Houghton said. “We came out and scored two goals immediately after halftime and held the lead the remainder of the game.”

Hussey and Zimmerman combined for 14 draw controls that game. Defensively, the Falcons caused nine turnovers. Six players scored in the 15-9 win, and eight goals were assisted.

“If there was a record for draws, it would have been broken by Erin Hussey as she had 12 draw controls that game,” Houghton said. “I know Erin is working hard on the draws, but she really does make it look effortless.”

With wins against Chesapeake and Arundel, Severna Park closed out the regular season and advanced to the inaugural JV girls lacrosse county championship on May 9.

“JV championship games were slated to begin during the 2020 season but were postponed due to COVID,” Houghton said. “So, to say we’ve been waiting a long time to compete for a championship is an understatement.”

Houghton said she is proud of the team, not because of the undefeated season but because they played for one another and helped one another improve.

“There was a lot of camaraderie on this team, and they had fun together,” she said. “As a coaching staff, we couldn’t ask for more. Additionally, our team won the SPHS Sportsmanship Award this year for our partnership and support of our unified bocce team. Our girls supported the team by attending games, making posters for their players and cheering them on from the stands.”