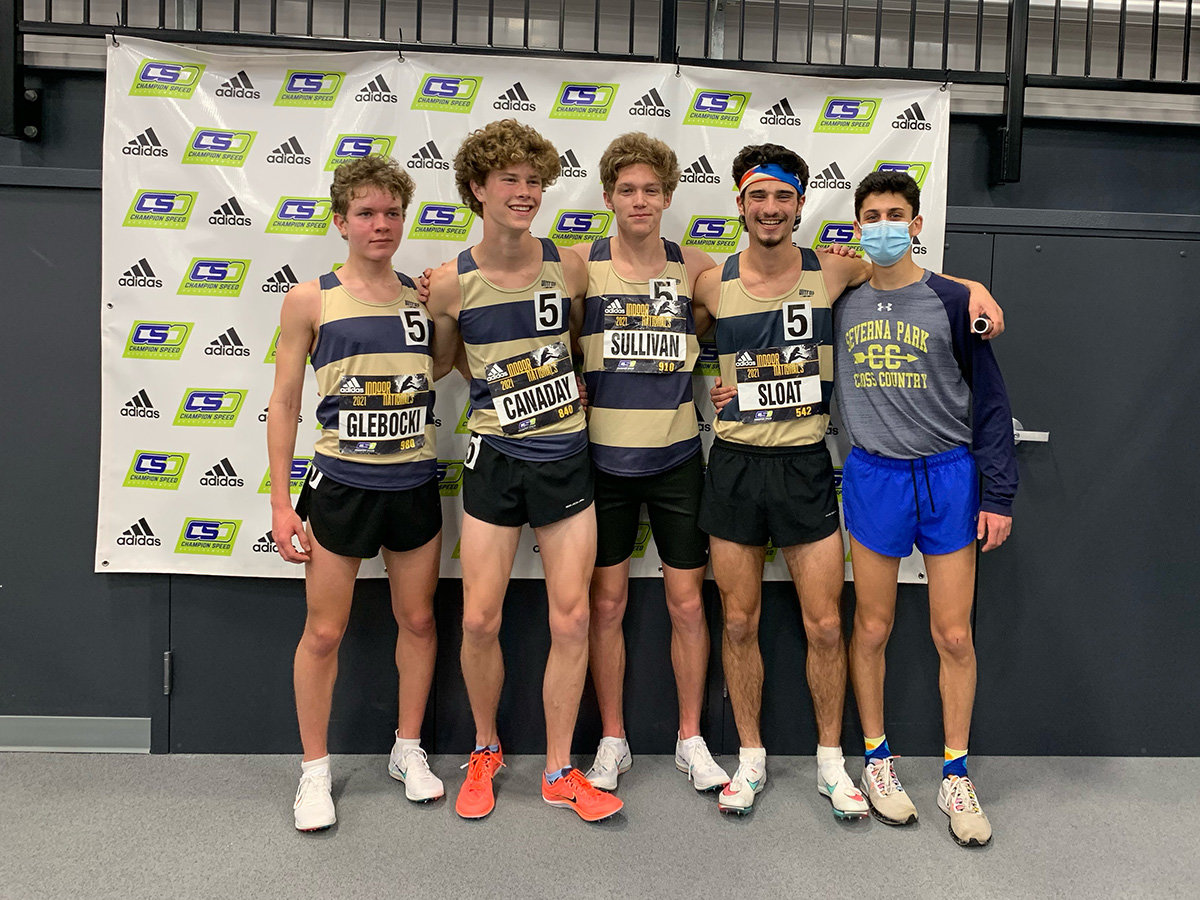 The team of James Glebocki, Tyler Canaday, Eddie Sullivan and Carson Sloat placed fourth in the distance medley championship at the Adidas Indoor Track and Field National Championships in Virginia Beach during the weekend of February 26-28. 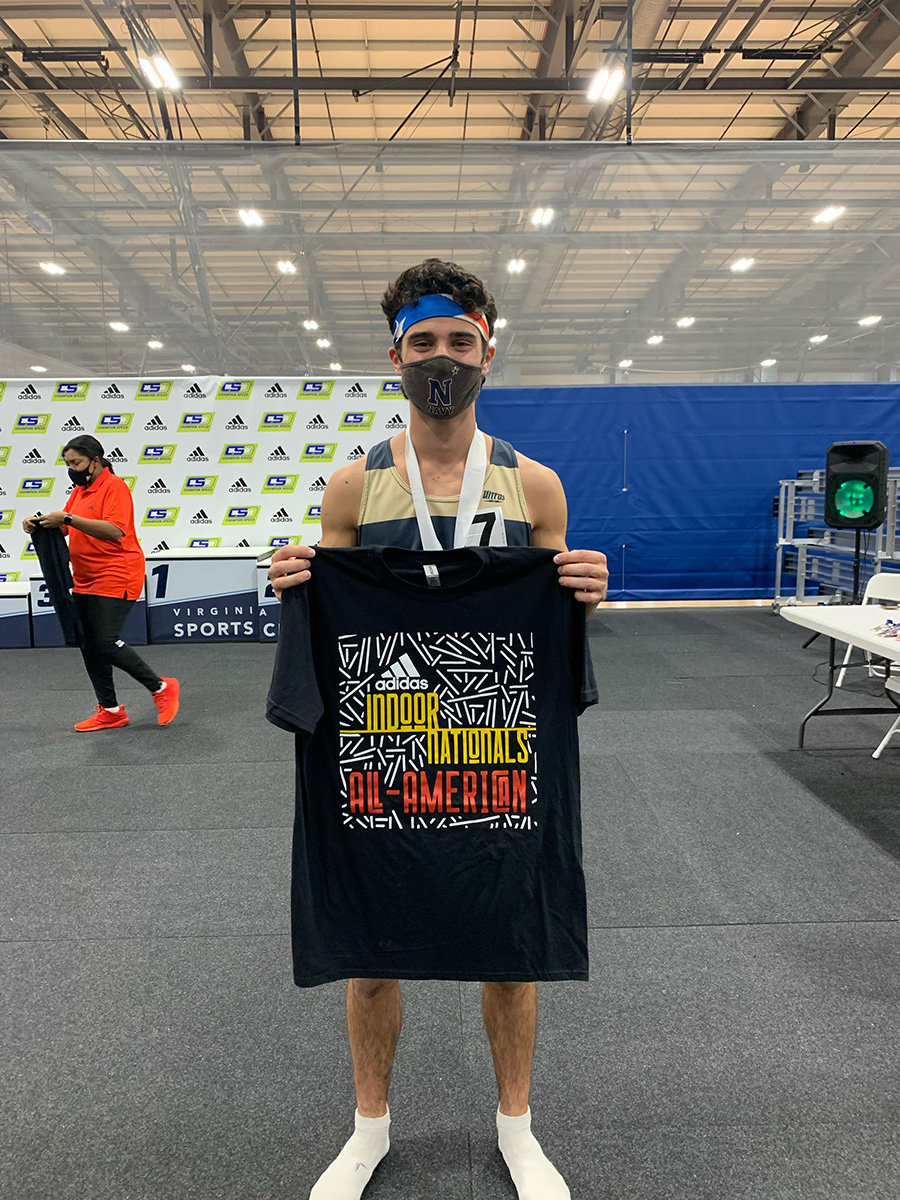 For many high school kids, track and field is the sport they use to stay in shape for their main sports. For Severna Park High School senior Carson Sloat, track is his main sport.

Sloat, a member of the track and field and cross country teams at Severna Park, enjoyed a career weekend at the Adidas Indoor Track and Field National Championships in Virginia Beach, Virginia Beach. At the event, which spanned from February 26-28, Sloat ran in the 800-meter championship, where he finished with a time of 1:54.48 and placed sixth overall.

“I’ve been training really hard for the 800 over the last month or two, so I decided that would be my best go-to,” Sloat said. “All-American is top six, and that’s what I was really going for, so I knew to get that, I needed to run fast and needed to start out fast.”

Racing in the slowest heat of three, Sloat wasn’t sure how the race was going to go without faster competition to really push him. After falling into second place with just over 100 meters to go, he passed his competitors with about 20 meters left to win the heat and earn the All-American bid.

“That’s what got me the All-American spot, sixth place,” Sloat said. “From the slow heat, [that] was huge for me. I didn’t know if I would be able to do that and it was also a two-second [personal record].”

Facing off against some of the best runners in the nation, Sloat held his own and saw his hard work pay off. He also set a new school record with his time.

“I tried to go into the race as confident as possible,” Sloat said. “When you’re racing with any doubt, your body immediately shuts down, that’s what I’ve found. Your mind is so much stronger than your body.”

While Sloat set a new personal best in the 800-meter, it wasn’t the only event he competed in. Sloat was also a member of a team that placed fourth in the distance medley championship and broke another school record, finishing with a time of 10:20.91. He raced alongside teammates Eddie Sullivan, Tyler Canaday and James Glebocki, all juniors at Severna Park.

“We pretty much do all the same workouts, which really helps,” Sloat said. “They push me a lot. They’re always just right on my shoulder in workouts and they’re all huge team camaraderie guys, putting the hard work in together. Having those guys to push me, I push them, it helps a lot. I love having those guys by my side.”

The team-first mentality is something the track and cross country teams at Severna Park stress, and it has allowed them to see success across the board. Pushing each other while having a common goal in mind has become a blueprint for success for runners like Sloat.

“Our whole program is about the team,” Severna Park cross country head coach Joshua Alcombright said. “We is greater than me. That’s something we try to preach throughout our program.”

Sloat credited the team mentality in pushing him to improve on his times and reach the goals he intended. While having a good supporting cast around him helped, he also pointed out one more person that pushed him during the race.

“[For this last meet], my dad was right by the finish line, and he has one of the loudest voices I’ve ever heard,” Sloat said. “At just about any point on the track, if he yelled and I heard him, it was like a little boost.”

While the Adidas championships were a club meet and not a school sanctioned event, it was still big for the Severna Park runners as they gear up for the 2020 spring season.

“They’ve been really dedicated during the whole pandemic,” Alcombright said. “It’s good to be back with the kids. To see them accomplish their goals, it makes me proud, it makes it all worth it.”