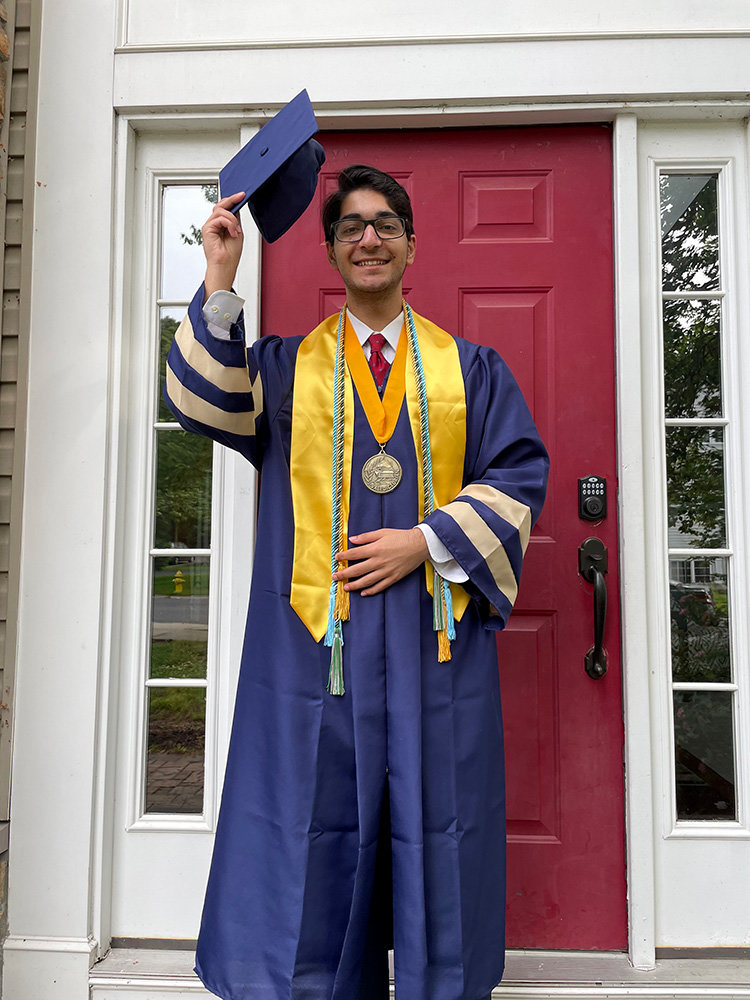 Ryan Khan worked hard to earn the title of valedictorian by taking as many AP courses as possible in his high school career.
Posted Wednesday, June 30, 2021 5:30 pm
By Haley Weisgerber

The class of 2021 walked across the stage at Crofton High School on June 9 and bid farewell to Severna Park High School. Among those students was Ryan Khan, who was named this year’s valedictorian.

Khan moved to the United States from the Middle East when he was in the eighth grade. He lived in Crofton for the summer and started school at Crofton Middle School before transferring to Severna Park Middle School after a few weeks.

While he was living in the Middle East, Khan said he was not considered to be a good student. During his time at Severna Park High School, he began taking Advanced Placement (AP) courses and started to take his education seriously.

“It's humbling to know that I was not a great student there, and then I gradually worked my way up,” said Khan. “I worked hard, I took all AP classes and then I ended up doing well.”

He said that one lesson from the first semester of his freshman English class inspired him along the way. His teacher, Jake Vickery, challenged the students to write about who they are, who they want to be, and who they want to be four years after graduating. Before graduation, Vickery sent Khan an email congratulating him on being named valedictorian.

“He emailed me, and he basically referenced that lesson that he taught us four years ago,” said Khan. “That was great because during those four years, I had that in the back of my mind. I want to thank Mr. Vickery for that.”

Khan was enrolled in four AP courses in his sophomore year, seven courses in his junior year and seven in his senior year. After he realized that he was taking all of the possible AP courses, Khan started asking around to find out about his class rank.

Khan said that aside from his family, his friends in the Middle East were his biggest support system.

“I remember one time, it was late at night and I was struggling to do an assignment and I was procrastinating,” said Khan. “They said, ‘No, you have to keep your rank one.’ They convinced me to go do my assignment.”

This was not the senior year Khan expected to have. He may have missed out on many important traditions and being in the classroom for much of the year, but Khan is making the most of the situation.

“The actual positive thing that came out of this whole distance learning thing was it really challenged our abilities to adapt to something new,” said Khan. “It's going to help us prepare for future challenges and changes in the future.”

He is attending the University of Maryland College Park in the fall to double major in economics and math with a minor in Spanish. He is also considering another minor in astrophysics. After achieving his bachelor’s degree, Khan would like to get a master's in quantitative finance, and then eventually a doctorate degree in economics. In the future, he would love to work on Wall Street, and has even looked into the possibility of working for the Federal Reserve.

A Message From Ryan Khan To The Class Of 2021

Hey everyone! I wanted to leave a small message as thanks for all the wonderful experiences I've had with you over the past four years. I want to start off by congratulating each and every one of you. This is a great opportunity for me to say you’ve made it. You’ve worked long and hard these past four years; sometimes it was easy, most times it was not. But you made it. Congrats! Now, onto bigger and better things! Second, although I would love to mention a few people by name, I probably shouldn’t for obvious privacy reasons. Instead, I want to thank one specific person for all they’ve done for me during the early COVID days. Whether it was sharing TV recommendations, watching movies together or just chatting, I want to sincerely thank you for all the memories I had the pleasure of making with you. You deserve the world. I’m sure you know who you are.

Well, that’s it from me. Enjoy life, make memories and don’t forget about our reunion in a few years!