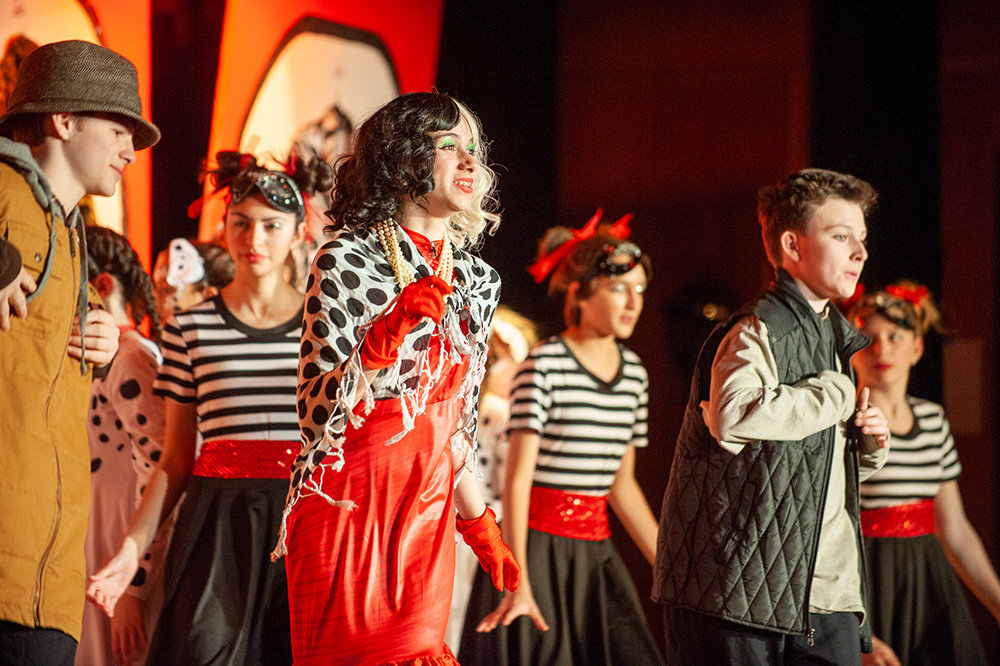 Who let the dogs out? St. John the Evangelist Middle School did, entertaining audiences during the weekend of April 1-3 with its production of Disney’s “101 Dalmatians KIDS.”

The show featured stellar acting, charming characters and beloved musical numbers including “Kanine Krunchies,” “Cruella De Vil” and, of course, “Who Let The Dogs Out.” The enthusiasm from the cast was infectious.

“I always enjoy being able to go onstage with my friends and it was a lot of fun, especially for our families,” said Rowan Layman, who played the soft-spoken yet confident Roger.

Sharing that thought was Morgan Anderson, who played Perdita, one of the puppies’ parents.

“I always look forward to the middle school show,” Morgan said. “With ‘101 Dalmatians,’ there were a lot of really good roles … we all put a lot of hard work into the show.”

Morgan was also thrilled to perform with her best friend since first grade, Alexa LaChapelle, who starred as Cruella De Vil. Alexa previously performed in “Seussical the Musical” with Theater in the Park. With St. John, she has acted in “Go Fish” and a Christmas production. This year’s show at St. John presented a different challenge.

“I’m always the good character, so this is different; kids boo me sometimes,” she said with a laugh, referring to her time spent in character. “It’s also fun because I get to be out of my comfort zone. Cruella is very different from my personality.”

Although smaller in stature, the younger performers — many of them dressed as puppies that foiled the plot of Cruella and her bumbling henchmen — were just as big a presence in the show.

“It was good to be back onstage,” said second-grader Mary Grace Lenares. “We have waited such a long time.”