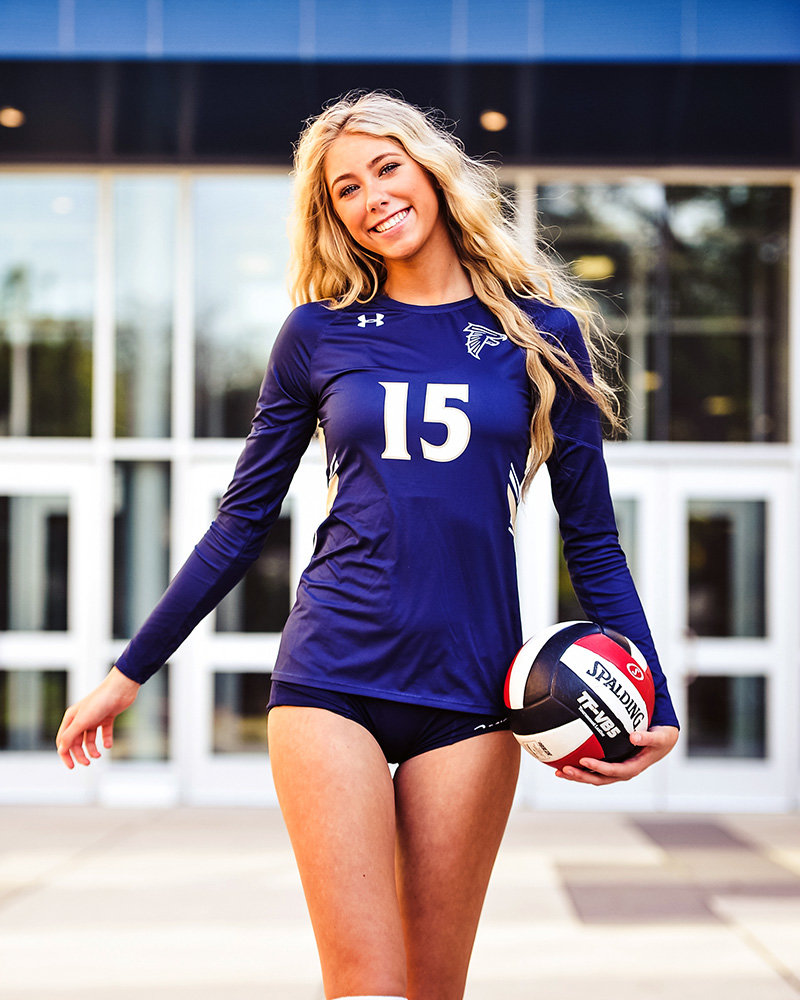 The senior is quick to deflect discussion about her individual accolades, though. Meadows is all about the other players donning Falcons uniforms around her.

Meadows has had plenty of time to hone her leadership skills as she has started at the varsity level for all four years at Severna Park High School.

“We do have freshmen make varsity, so that isn’t rare,” said Tim Dunbar, head coach for the Falcons volleyball team. “However, starting and contributing as a freshman doesn’t happen all that often.”

Dunbar credits a trifecta of characteristics that earned Meadows a starting position since day one: athletic ability, experience and height.

It’s the latter trait that’s hard to miss on the court. The 6-foot-1 inch Meadows gained her height naturally. Her father, Jason, is 6 feet 6 inches tall.

As for experience, Meadows first started with volleyball when she was in fourth grade, and she hasn’t looked back. In addition to sporting number 15 for her school now, Meadows has been playing club volleyball for Bay Area Volleyball Academy since her teenage years began.

Meadows has been on the court for 94 percent of the team’s playing time this season, and it’s a testament to her athleticism that she’s able to maintain endurance without sacrificing production. Meadows’ ability to put up some of the team’s top numbers in kills, aces, blocks and digs this season is indicative of the captain’s holistic grasp of the sport.

“Coach Dunbar has always been there for me since my freshman year and has given me the opportunity to play other positions, which has made me a more versatile player,” Meadows said.

With volleyball playoffs ramping up this month, Meadows pointed to a pair of highlights from the season that she hopes will give her team a confidence boost.

In September, the Falcons downed Maryvale Prep in a five-set match.

“That was a big win for us because they haven’t lost a game in like two years,” Meadows said.

Another building block was in October against defending state champion Arundel. Despite the Falcons losing the match in five sets, Meadows said taking a team of that prestige to the limit was rewarding.

“This has been a pretty good season team wise because we’ve just bonded really well,” Meadows said. “We’ve had a lot of fun so far, and we’re excited to get better.”

The appetite to constantly improve is something her coach has noticed.

“Even after four years, she still is coachable and knows she has room for growth,” Dunbar said. “As a veteran, she understands her role on the team and how she fits into the dynamics, and she takes her leadership responsibilities seriously.”

Meadows started her freshman year as a middle hitter, a position her coach said isn’t easy to feel comfortable in for a lot of players, but she now prefers to play the right side.

Along with Meadows’ versatility, Dunbar also credits her club experience as another factor that gave Meadows a good volleyball IQ and a solid foundation of technique to play at the faster level of varsity.

“Ava is a perceptive and introspective player and is able to make corrections mid-match,” Dunbar said.

As part of her captain duties, Meadows stresses discipline and accountability, and she doesn’t overlook herself in those duties.

That responsibility doesn’t end for Meadows on the court. She is also in the National Honors Society.

“I take my grades pretty seriously,” said Meadows, who hopes to attend a four-year university with the aim of going into business and sales.

Meadows has fielded offers to play volleyball in college, but she’s undecided on what she wants to do. Even if she doesn’t commit to play for a university, Meadows said she’d still like to play club in college.

Meadows credits her father and mother, Jennifer, for her love of being around people and for helping to keep her on track. That’s no easy task as Meadows not only balances school, volleyball and homework, but she also works part-time at The Park Salon & Barber.

For a teenager with a love of driving with friends, traveling and hitting stores, the job helps Meadows keep both her gas tank and pockets full.

With little free time during volleyball season, Meadows recalled how her friends were recently introduced to the joy of the sport she loves. Meadows noted that her friends didn’t look at their phones once while attending her match, which is no small feat for a group of high school students.

“It’s so much more entertaining than people think,” Meadows said. “With volleyball, there’s always something new.”