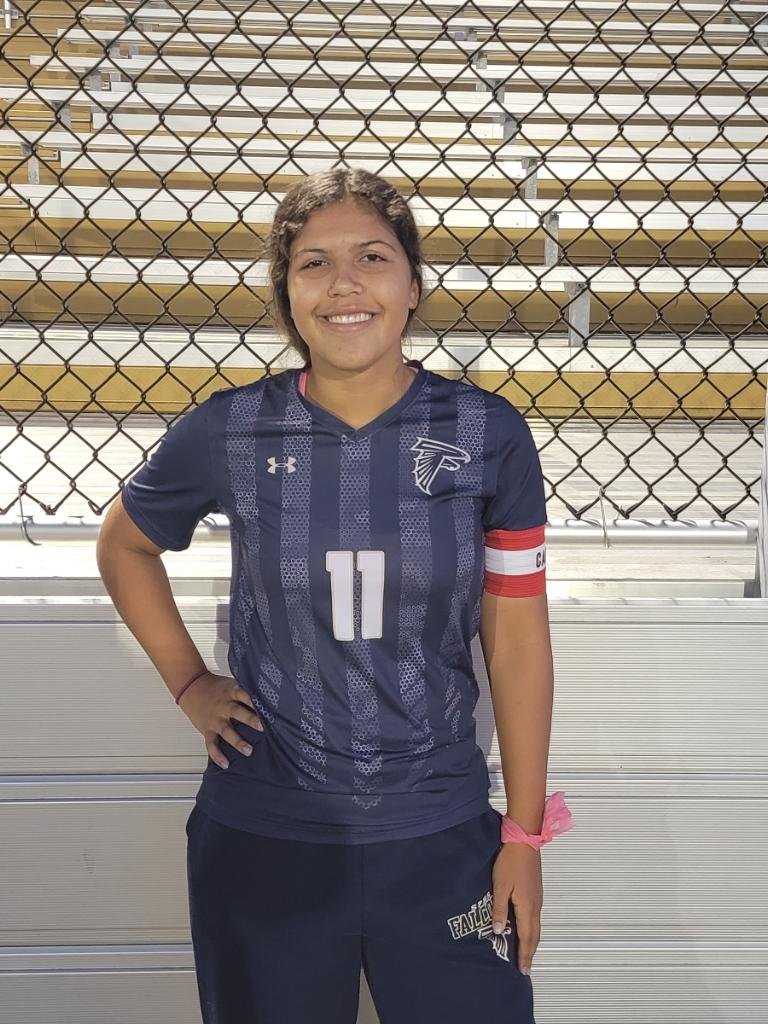 Despite being sidelined by an ACL tear, Joi Fleming has been actively supporting her teammates on and off the field.
Photo by Conor Doherty
Posted Thursday, November 4, 2021 8:27 pm
By Conor Doherty

Standing on the sidelines, Severna Park’s Joi Fleming wishes that she could be out on the pitch, playing alongside her teammates. But the Falcons senior midfielder and team captain suffered a season-ending ACL tear in her left knee on September 30. However, that hasn’t stopped Fleming from supporting her teammates as much as she can during this season.

Despite being relegated to the sidelines, Fleming has tried her best to make her voice heard on the field. “I’ve been trying to be a very vocal hype person, cheer my teammates on,” she stated. “I try to cheer them on, make them feel the energy from the bench and from the sidelines so then they’re playing their best on the field.”

But that wasn’t always the case. Before her injury, Fleming was a quiet teammate, not making herself heard too much during her first three years with the Falcons. “I was not the one who was loud, talking on the field,” she stated. “Other seniors kind of took that role and they did it really well, so I didn’t feel like I had to be loud.”

Even though Fleming wasn’t vocal back then, she still made teammates feel like they could come to her if they had any issues or concerns.

Now that she is a team captain, Fleming knows that she has the support of her teammates just as much as they have her support. She said that it meant a lot to be chosen as a team captain before the season started.

“Knowing that they felt that I would be a good leader for them made me feel good and happy to know that my teammates see me that way,” she explained.

Fleming described herself as a defensive midfielder, not the type of player who scores a lot. For her, that made being named team captain that much more meaningful.

She has shown she isn’t letting her injury stop her both from supporting her team and from trying to play soccer at the collegiate level next fall. She walks up and down the stairs at the Falcons stadium as exercise and there isn’t a noticeable limp when she walks. While she has shown mental toughness getting through this, it wasn’t easy for her knowing her last season as a Falcon was over.

“It was really tough that first week after it happened, especially when I got the confirmation the day before senior night,” she said. “It really was depressing, seeing as this was my last season and I wouldn’t be able to spend it out there playing on the field. But right now, I’m trying to stay positive and reliable for my teammates. For now, I’ll keep bringing the energy and make them feel supported out there on the field.”