Surgeon Moonlights As A Blacksmith 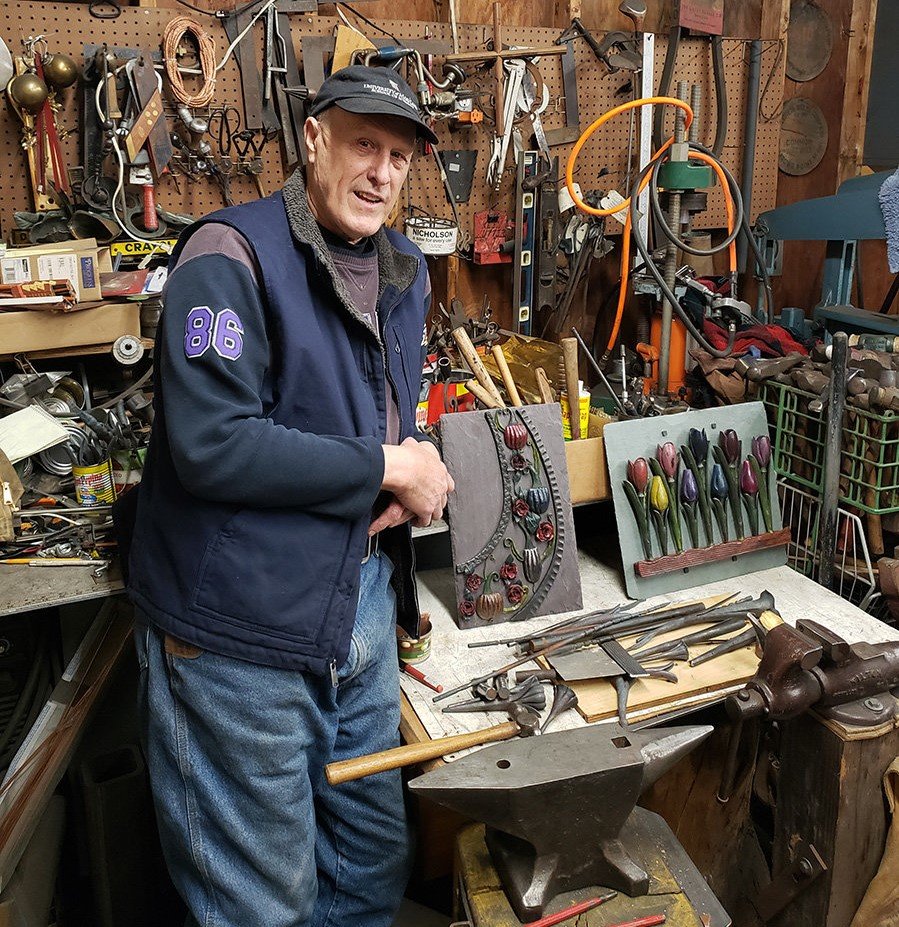 Dr. Bruce Jarrell said that being a surgeon and a blacksmith both require the same technical skills. He works on metal at his Severna Park home.
Photo by Conor Doherty
Posted Monday, April 12, 2021 9:12 am
By Conor Doherty

When people ask Dr. Bruce Jarrell why, as a surgeon, he spends so much of his time blacksmithing, they don’t realize that they are asking the wrong question.

“The question should be, ‘How come you went into surgery?’” Jarrell stated. “It’s because this is what I’ve done my whole life, working with metal and wood. This is second nature to me.”

According to Jarrell, president of the University of Maryland, Baltimore, he has been working with metal since he was about 10 years old. Growing up on a farm with a small canning factory on the Eastern Shore, he worked on every piece of equipment on the farm, learning along the way how to make new machines and repair old ones.

Jarrell sees being a surgeon and a blacksmith as two halves of the same coin. “Surgery is a technical art as is metalworking, involving hand-eye coordination, being able to work on the fly and coming up with new solutions if something doesn’t work,” he explained. “With metalworking, you’ve got something that you want to do, you have a vision of what you want to make and then you have to get the material to do what you want it to do, and if that doesn’t happen, you have to come up with other solutions.”

Of course, the main difference between the two is that if a mistake occurs while metalworking, the piece can just be thrown away. “Because of that, there exists a margin of safety with surgery that you don’t necessarily have in metalworking, besides safety for me,” Jarrell said.

For Jarrell, metalworking isn’t about making pieces to sell for profit; it’s about learning new techniques of metalworking. “Every one of them is an exercise where there is a new method in it,” he stated.

Jarrell uses the structures of flowers and other plants as inspiration for new pieces. Strewn on his workbench in March were several practice pieces of flowers with varying differences in the number of sides to each piece’s stem.

“If you want to get closer to nature, you got to be able to do these odd numbers, three, five, seven, etc.,” he explained.

“You don’t think of yourself as a machine,” responded Jarrell when asked why he became a doctor instead of an engineer. “Your body is one of the most interesting, complicated, not understood machines. It’s a remarkable machine. You think of it as medical; I think of it as engineering. If you asked why I would do stuff like this (metalworking), it’s my engineering passion, of putting things together, and I think that is human nature for a lot of people.”