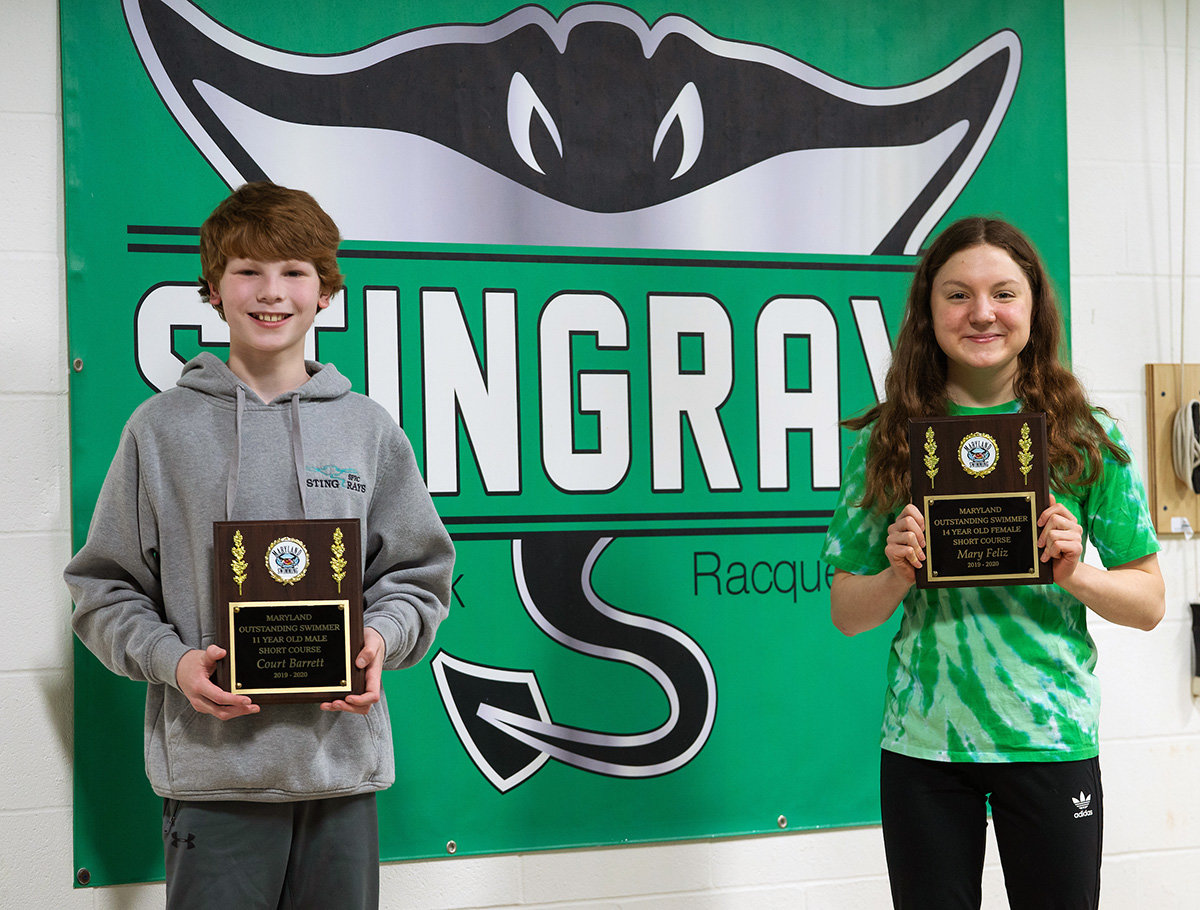 Despite an unusual swim season due to the COVID-19 pandemic, Severna Park Stingrays veteran swimmers Court Barrett, 12, and Mary Feliz, 15, earned Maryland Swimming’s Outstanding Swimmer award for the 2020 season. The performance-based award recognizes Maryland’s most well-rounded young swimmers who record the fastest swim times across multiple events, and it is presented to the top point-scoring swimmer by gender and age group per season.

Stingrays head coach Jim Hutcheson said he was not surprised the two earned the award, as Barret and Feliz have been dominating the sport for years and continue to improve and evolve their skills to compete with top swimmers in the state.

“Court has been a top swimmer since he joined our club four years ago, and Mary is our team leader,” Hutcheson said. “At practice, Mary is the first one in the pool and the last one out, and she demonstrates true leadership and team spirit. At the same time, Court challenges himself by practicing with the club’s senior training group where swimmers are sometimes two years older and physically stronger.”

Over the past year, Barrett and Feliz have both worked hard to expand their race repertoire, adding more and different strokes to their skillset. According to Hutcheson, both swimmers “swim and think strategically and tactically” in order to remain at the forefront of their age groups and become more well-rounded swimmers.

Barrett, a seventh-grade student at Severn School, has been a focused and competitive swimmer for years, and has a long-term goal of swimming at a major university. Currently, he has the University of Texas at Austin in his sights. Additionally, Barrett is encouraged and mentored by prior United States (U.S.) Olympic swimmers and hopes to qualify one day to compete at the Olympic trials. In the near-term, however, he plans to improve his swimming and compete at national meets.

Feliz also has long-term goals in competitive swimming. As the third of four kids to swim with the Stingrays, Feliz hopes to follow in the footsteps of her older brothers and swim at a military service academy, specifically the U.S. Naval Academy. According to Hutcheson, “Mary and her family have a passion for national service,” and she would like to follow that passion into college. “Her hard work, discipline, determination, and grind will get her there,” Hutcheson noted.

Following their stellar performance last season, Barrett, Feliz, and their team are looking forward to getting back in the pool and competing in the 2021 season.