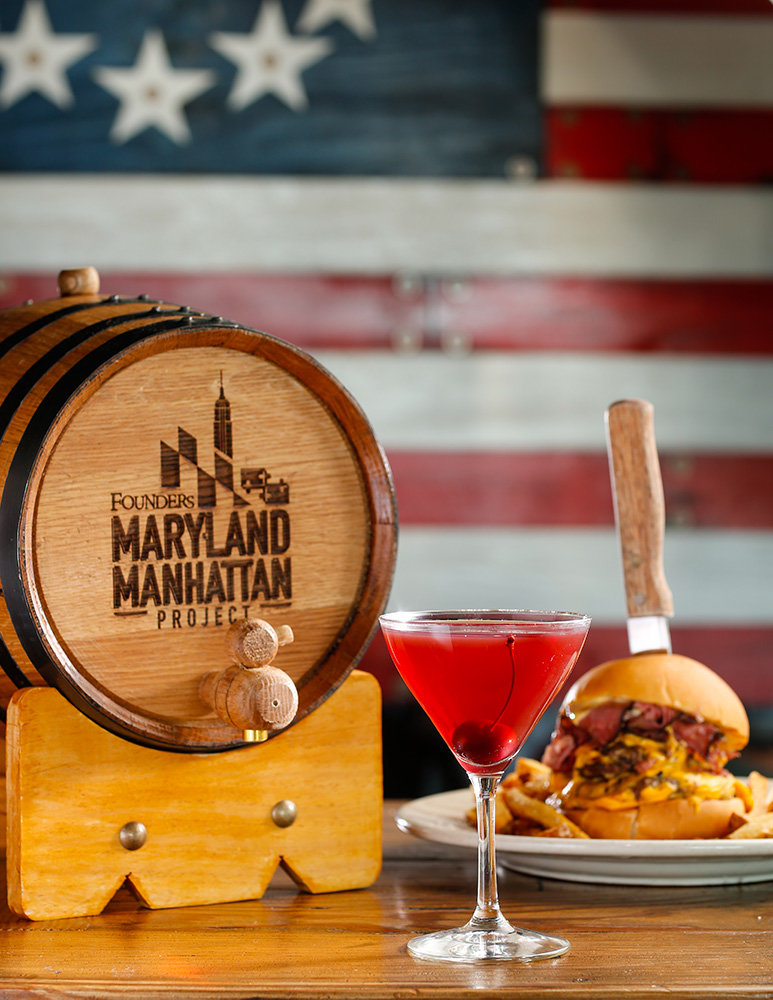 The Bunker Hill, pictured in the background, is staked with a knife. The entrée features two half-pound Angus burgers with American cheese and Founders’ seasoned corned beef brisket piled high on top, all served on a homemade sweet roll and smothered in a special sauce.
Photo Provided 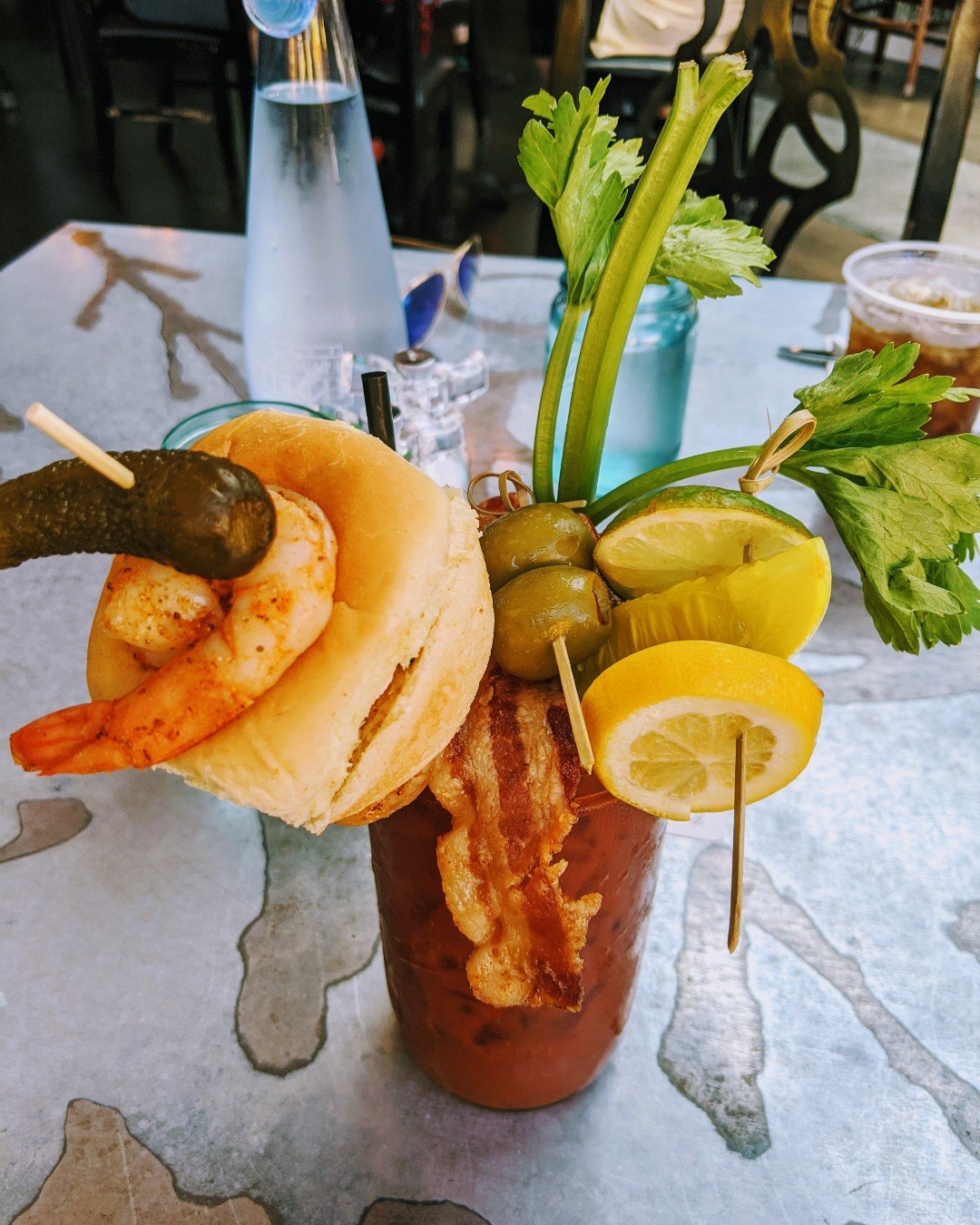 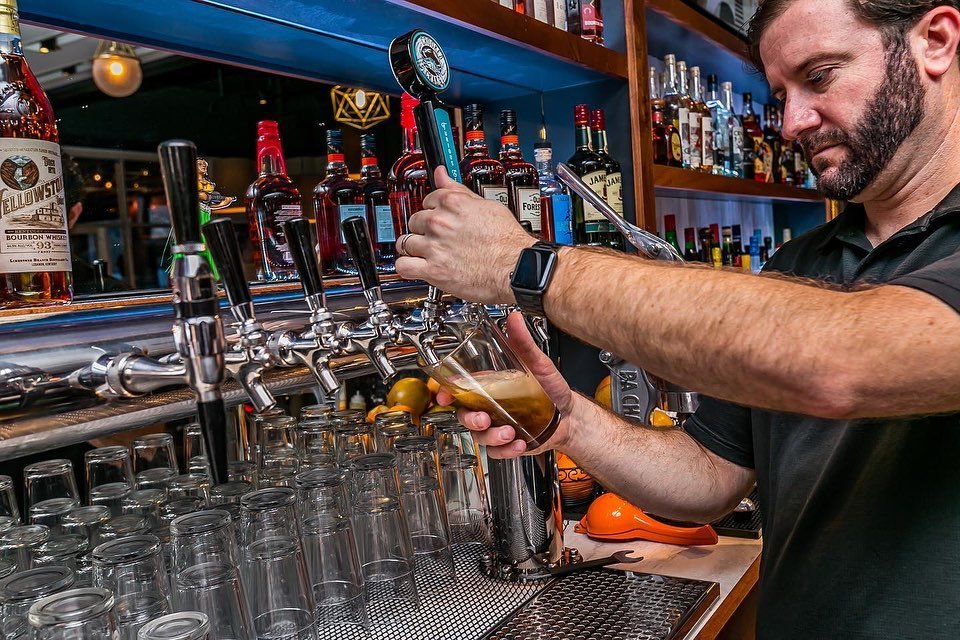 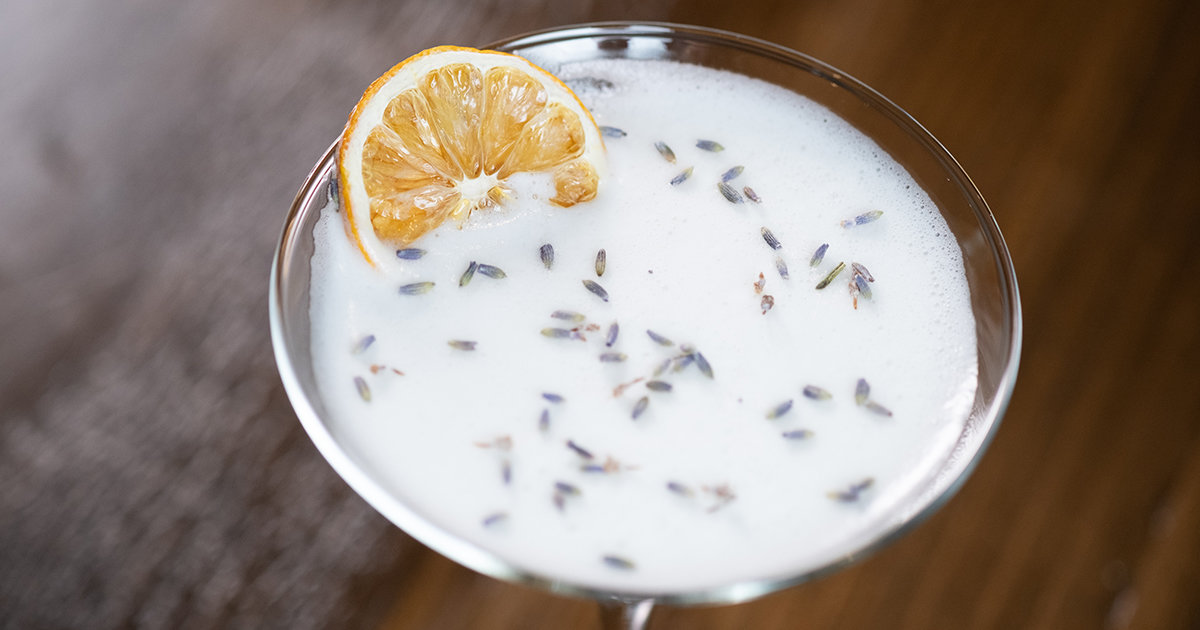 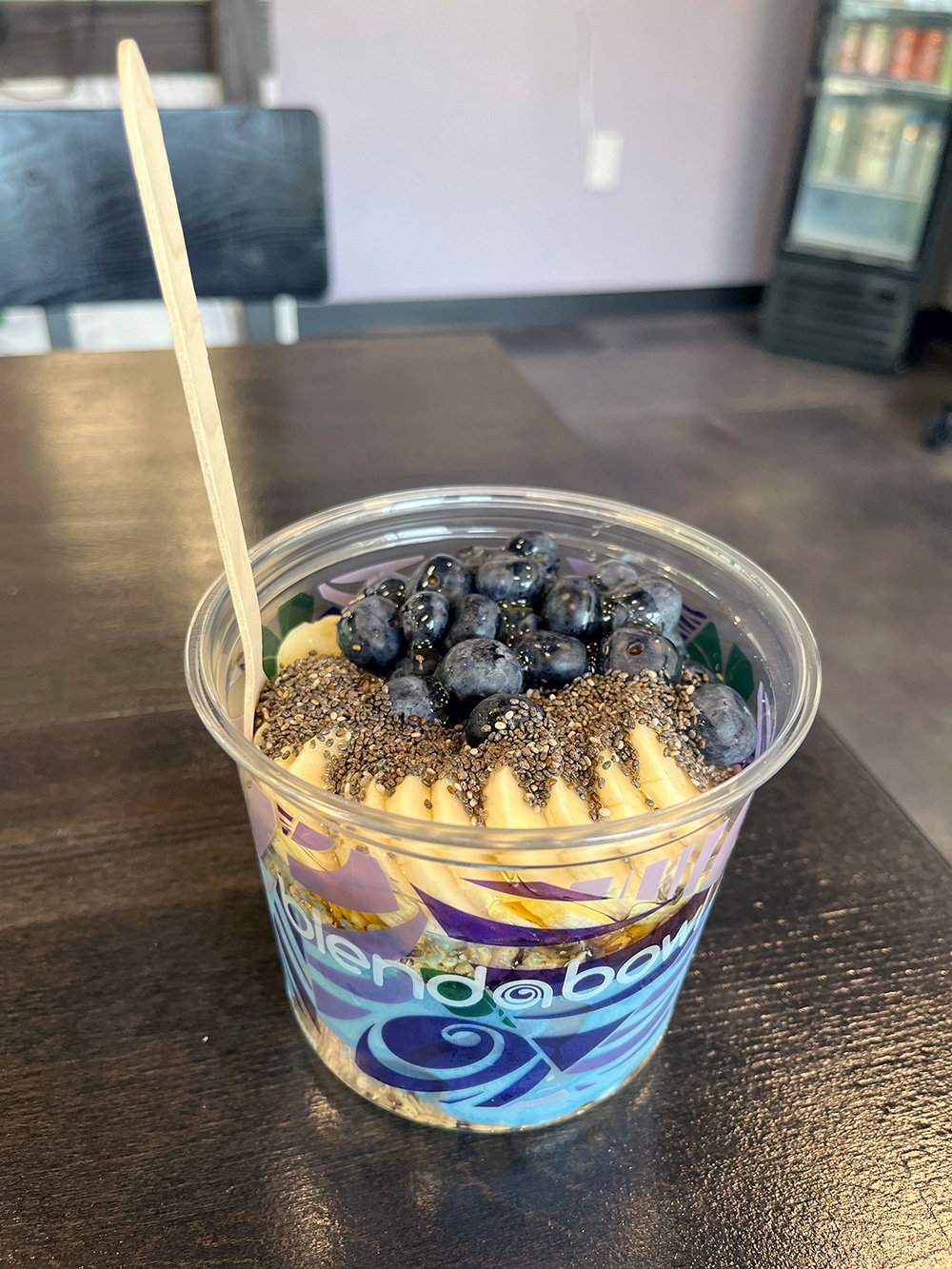 The Blue Crush includes spirulina, a blue-green algae that was used by the Aztecs and is known for its antioxidant and anti-inflammatory properties.
Photo by Zach Sparks 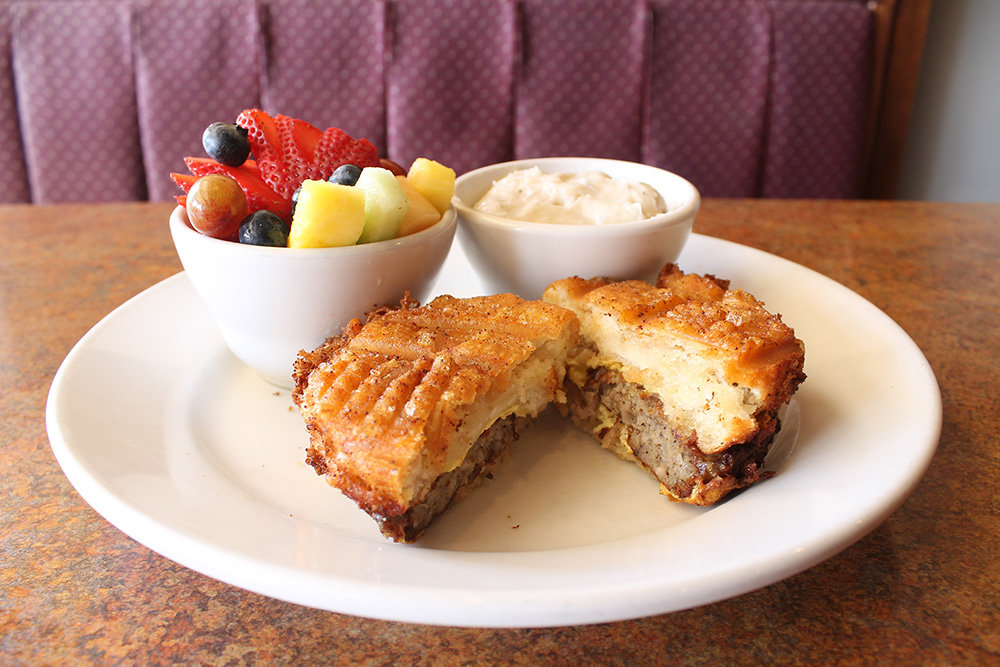 Severna Park and the neighboring communities are home to an array of locally owned restaurants, which means foodies can try several dishes and drinks that they won’t find at their average chain restaurant.

Named after a Revolutionary War battle, the Bunker Hill features two half-pound Angus burgers with American cheese and Founders’ seasoned corned beef brisket piled high on top, all served on a homemade sweet roll and smothered in a special sauce. The burger is so big that it’s staked with a knife.

“This historical aspect is a big part of Founders’ identity and brand, and one of the many menu items that have fun historical play,” said Janet Sumner, who owns Founders along with her husband, Steve. “Our food gets back to the basics — principles the founding fathers used, freshest ingredients grown closest to you, slow cooked and made fresh to order.”

As for the historical significance, the British defeated the U.S. forces on the Massachusetts battlefield on June 17, 1775. Despite their loss, the inexperienced colonial forces inflicted significant casualties against the enemy, and the battle provided them with an important confidence boost during the Siege of Boston, according to Smithsonian Magazine. Badly depleted, the besieged British abandoned plans to seize another high point near the city and ultimately evacuated Boston.

At Blendabowl, the Blue Crush is marketed to anyone who desires a toxin flush or muscle endurance, and for good reason. One of several all-natural blends on the menu, the Blue Crush includes spirulina, a blue-green algae that was used by the Aztecs and is known for its antioxidant and anti-inflammatory properties. But this blend isn’t just spirulina; it also has pineapple, banana and unsweetened almond milk, along with a choice of two of these toppings: coconut shavings, chia seeds, almonds, bee pollen, cacao nibs, hemp hearts, honey, hazelnut spread or almond butter.

Warning, the Blue Crush is not recommended for those who are pregnant, nursing or have an autoimmune deficiency.

This dish combines grilled rib-eye, chicken, shrimp, Mexican sausage, and jalapeño poppers on top of melted cheese and chipotle sauce — served with a side of rice, beans, lettuce, guacamole and sour cream. What sets it apart? Two things. It includes cactus and it has a unique presentation.

It’s served on a molcajete, which is kind of like a bowl, but the Mi Pueblo II staff describes it as a “lava rock.” Warning, this meal is served hot.

OK, maybe this seems like breaking the rules to list a whole portion of the menu, but that’s the unique part. In addition to beer, patrons at The Social will find cocktails on tap.

Of the cocktails, two of the most intriguing, according to managers, are the walnut old-fashioned and the Sunny Delight, which is a blend of vodka, blood orange, rosemary syrup and club soda.

The talented mixologists at Level have created several spring cocktails including The Red Queen, made using tequila, lime juice and demerara syrup, with red wine floated on top.

Season aside, locals will appreciate The Bourbonapolis, a combination of Woodford Reserve, lemon juice, black tea syrup and a blackberry/balsamic shrub.

OTHER ITEMS TO TRY

These menu items may seem more common, but they each have something that sets them apart.

An original creation from a Garry’s Grill chef, the Breakfast Bomb combines a sausage patty, apple-wood smoked bacon, scrambled eggs and American cheese stuffed in a buttermilk biscuit, battered and fried, served with country gravy and hash browns or a choice of other sides.

Pizza at a sports bar might not sound like a unique item, but this entry is all about the ingredients. JB’s uses fresh house-made dough to create 12- and 16-inch varieties of cheese, pepperoni, meat lover, Mediterranean veggie, buffalo chicken, Hawaiian, margherita, sausage, and barbecue chicken pizzas.