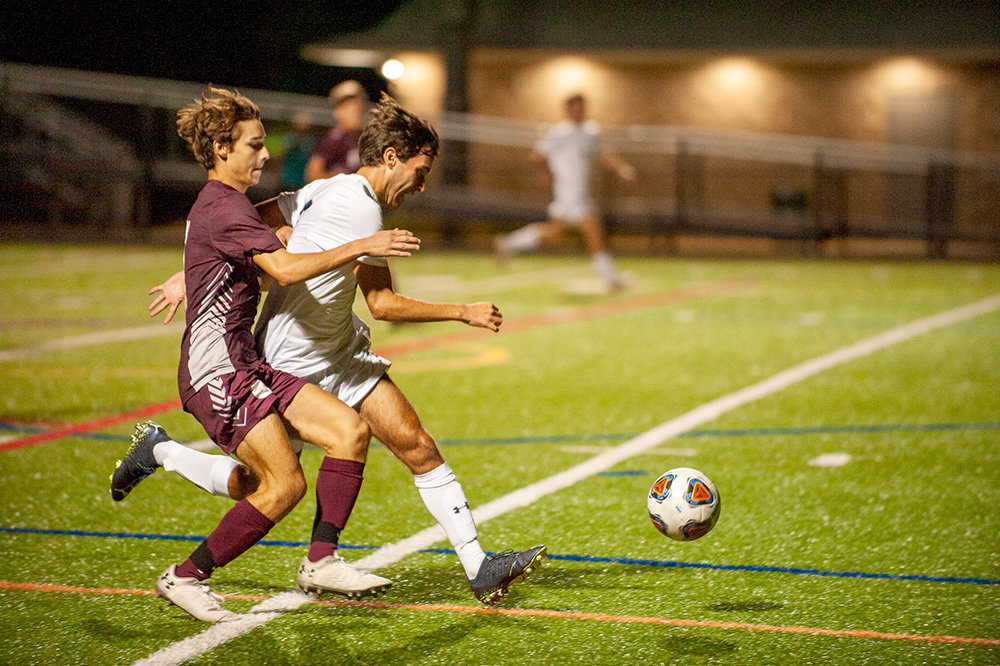 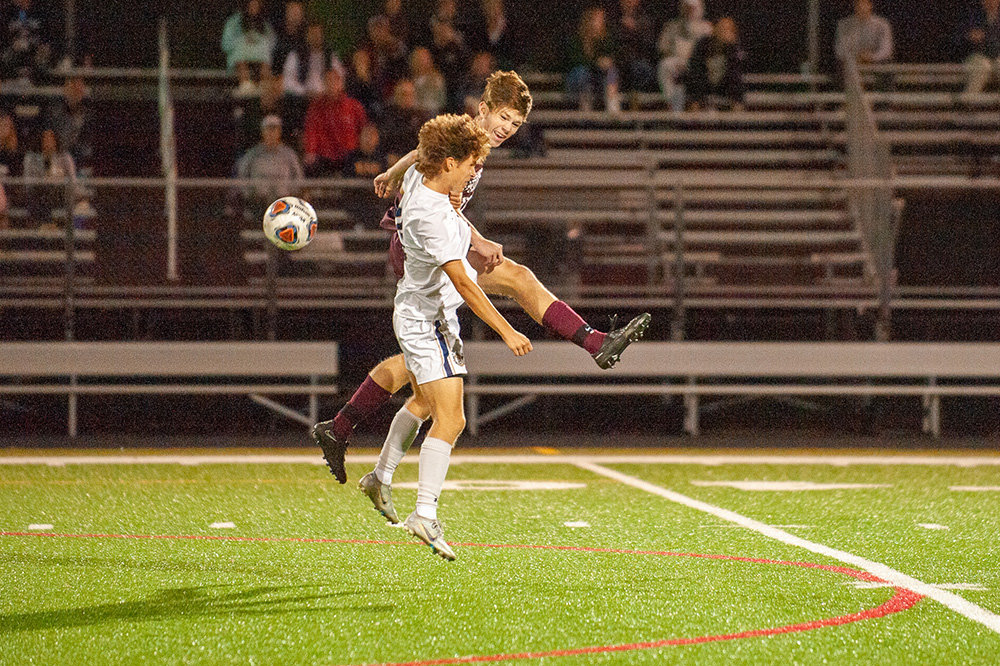 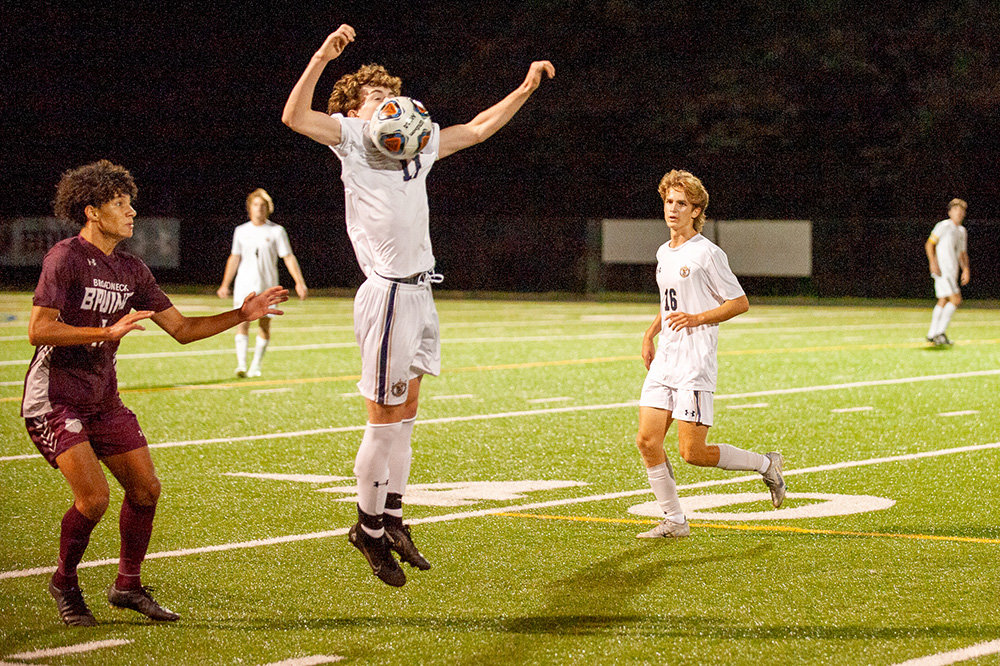 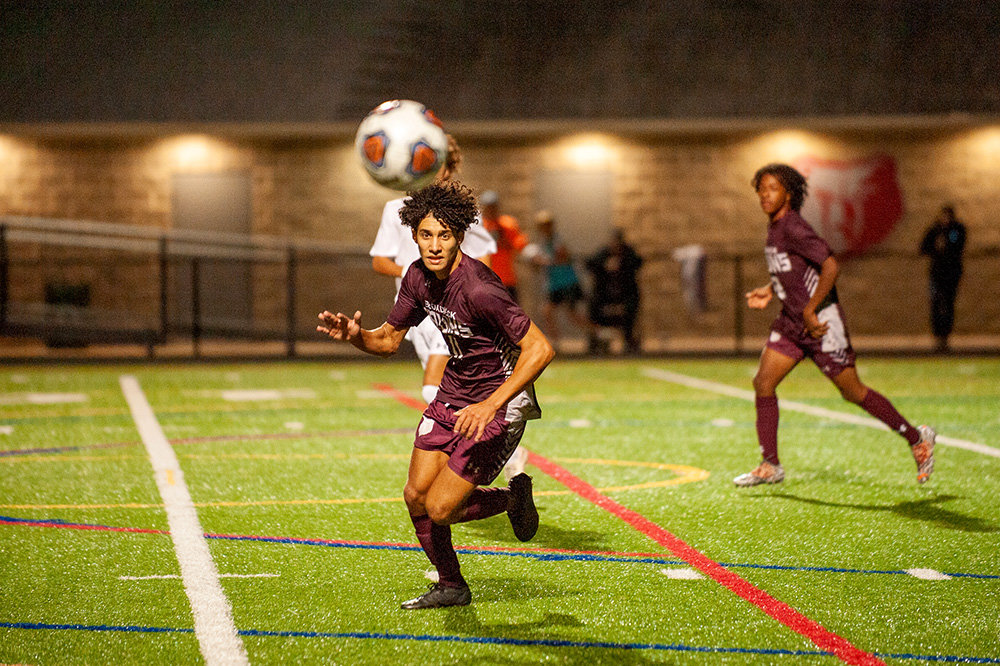 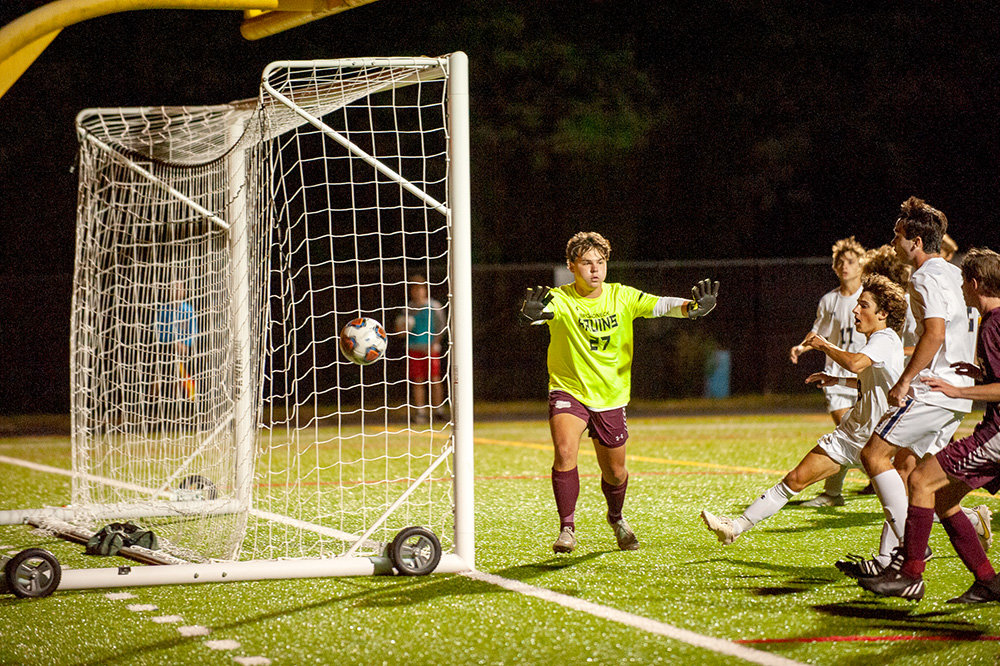 Matt Tettemer had seven saves for Broadneck. On this play, he watched the Falcons’ shot go wide left.
Photos by Zach Sparks 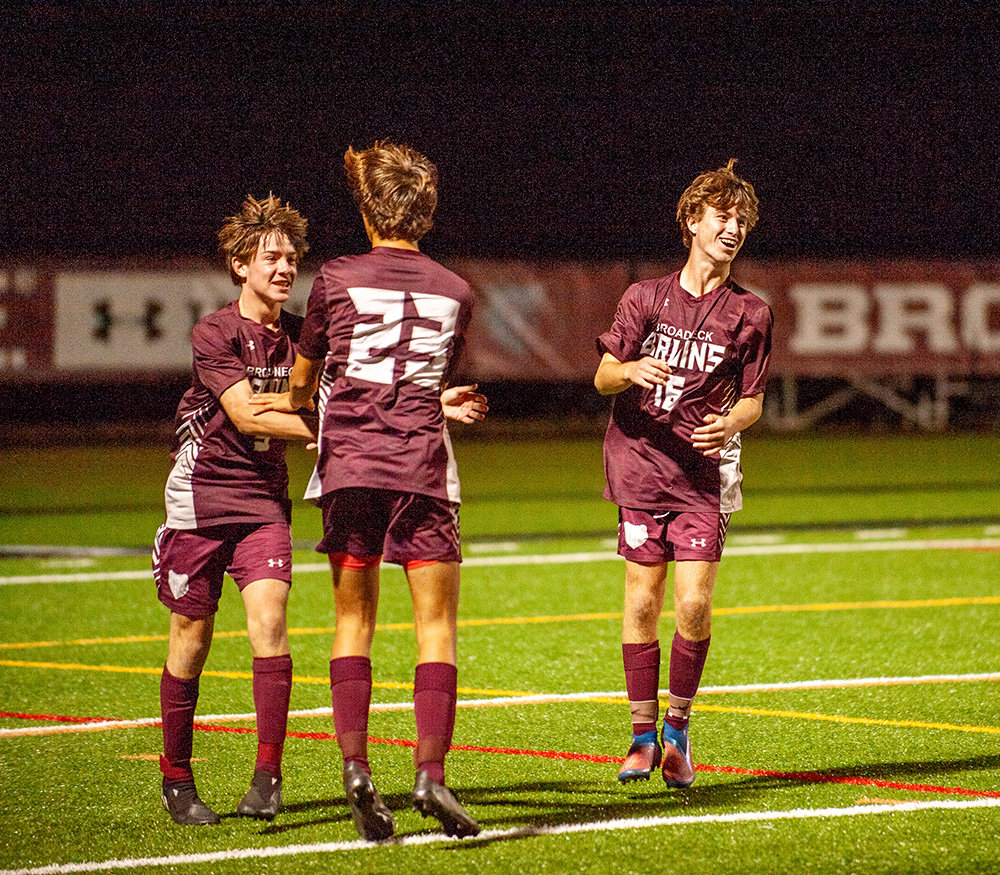 The Bruins celebrated after Harlan Welsh scored his second goal of the game just before halftime.
Photos by Zach Sparks 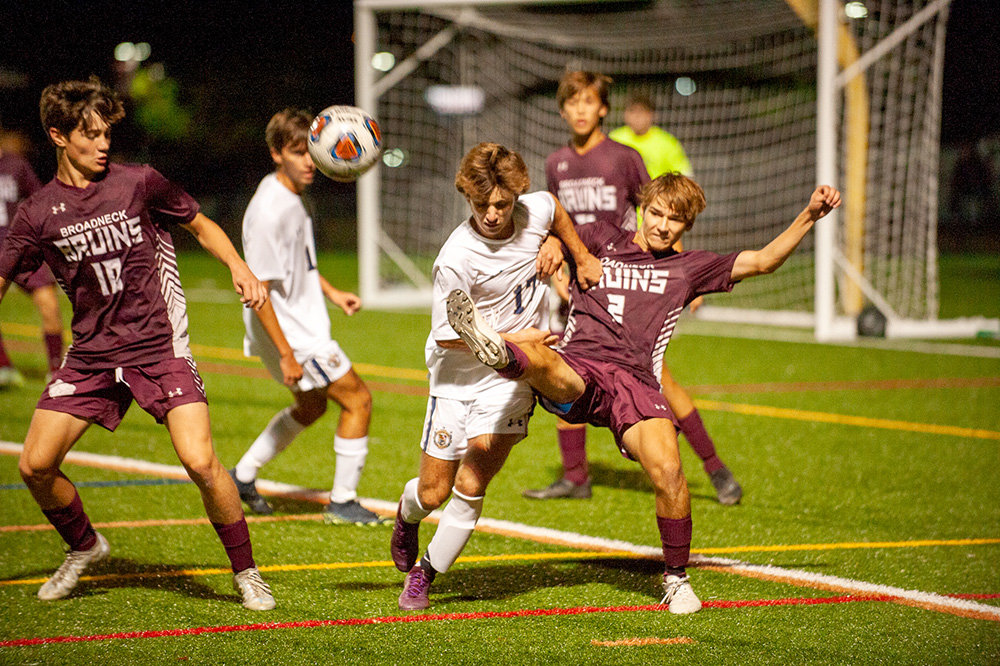 Patrick Robillard kicked the ball away from the Falcons, just before he was shoved.
Photos by Zach Sparks
Previous Next
Posted Friday, October 7, 2022 3:03 pm
By Zach Sparks l zach@severnaparkvoice.com

The previously undefeated Falcons boys soccer team traveled to Broadneck on October 29, hoping to get their eighth win of the season. Instead, the Bruins improved to 8-1 after getting two set-piece goals from Harlan Welsh, seven saves from Matt Tettemer and hustle from players throughout the lineup.

“I’m really proud of the way we gutted it out,” said Broadneck head coach Sean Tettemer. “It definitely was not pretty, but we pride ourselves this year on winning the first ball and being tough and being gritty, and that’s exactly what we did tonight. Our guys deserve a lot of credit for grinding that game out because Severna Park’s just fantastic.”

Welsh scored the first goal on a throw-in about two minutes into the game.

“I think it was just kind of right place, right time,” Welsh said after the game. “The first one kind of fell to me at the middle of the box, and it’s just training at that point, hitting it home.”

Severna Park came into the contest with four shutouts this season, so the Bruins knew goals would be hard-earned. The first half of play was physical, as both teams battled for possession. Just before halftime, Broadneck was able to get a scoring opportunity on a corner. Again, Welsh came up big for the Bruins, putting his team up 2-0.

“It was a good cross on both of them, and I was able to finish it,” Welsh said.

Severna Park never relented. With about 11 minutes remaining in the second half, Jeffery Chukwu scored for the Falcons to cut the deficit in half.

Matt Tettemer did his part to keep Severna Park from scoring again. He made a few diving saves and, at one point, charged out of the box, sidestepping his way through a group of Falcons to gather a loose ball.

“Our goalie, Matt, made a lot of clutch saves,” Welsh said. “At the end, he drew that penalty that put the game away. He had a great performance.”

That penalty had the Falcons fuming after they lost their last chance for a comeback.

Despite the loss, Severna Park sits near the top of the standings with upcoming games against South River, Old Mill and Arundel. Severna Park head coach Ryan Parisi was approached after the game for comment on his team’s performance this season, but he declined.

Coach Sean Tettemer had plenty to say. His team will try to keep growing as they face Arundel, Southern and South River.

“I know what our strengths are,” he said. “I know what we still need to do to improve, even if we are trying to play a tough style of soccer. I’d like to see us develop more into a possession team. That may or may not happen, but we’re going to keep grinding and trying to keep getting better every day and night.

“They deserve a lot of credit for this win right now,” he said of his players. “Severna Park is a great team, and we are still trying to find ourselves and we keep stepping up. I’m so proud of their effort and I’m so proud to work with them each day. They’re really a great group of guys.”