With Shutout Of Severna Park, Broadneck Girls Are Region Champs 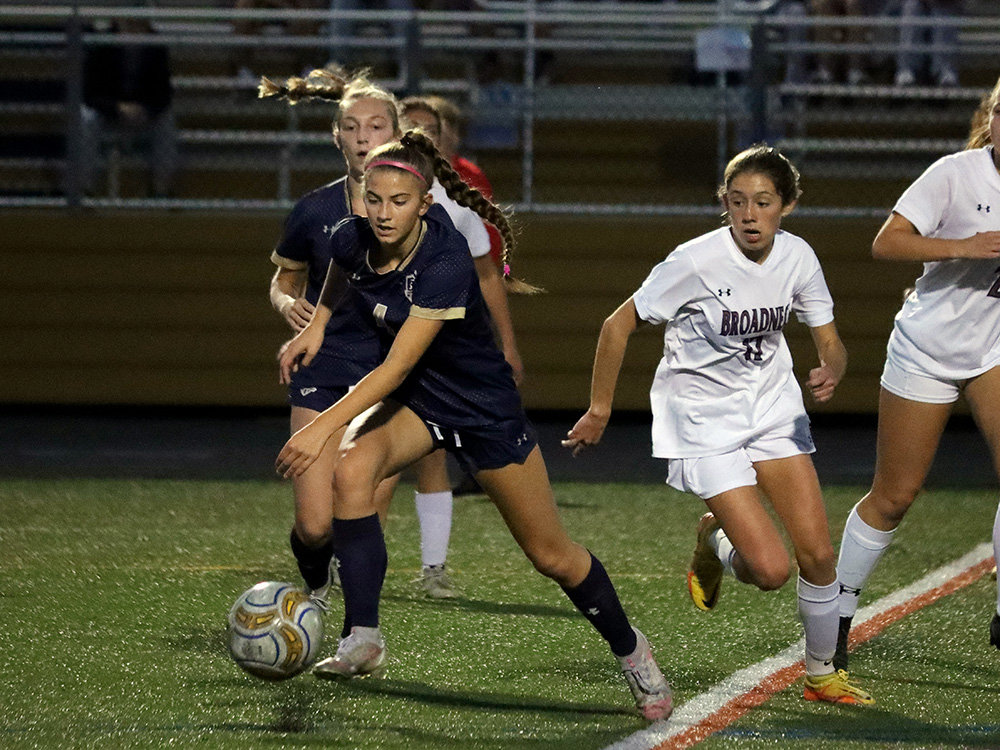 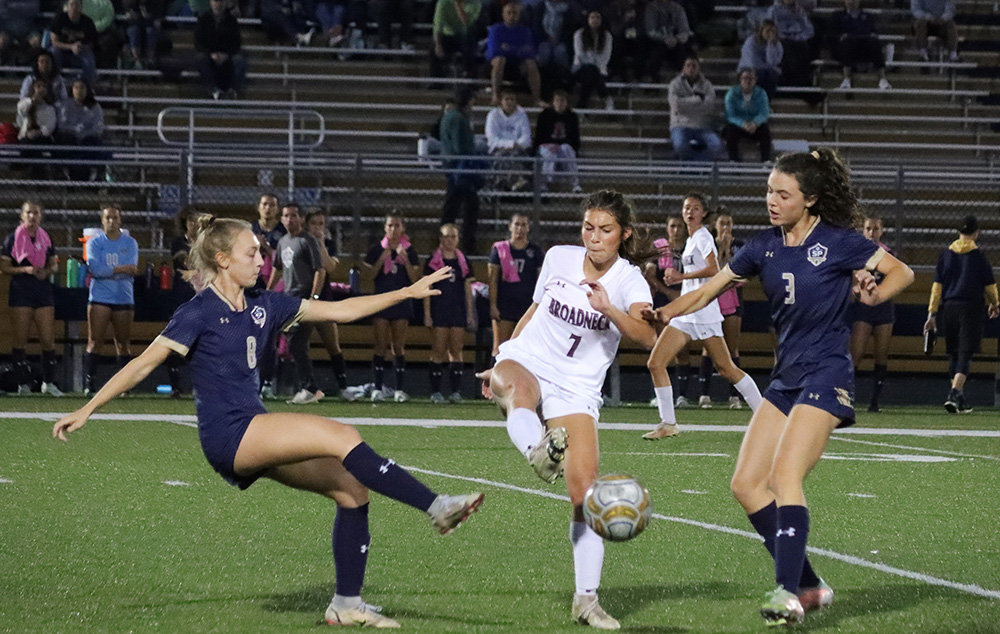 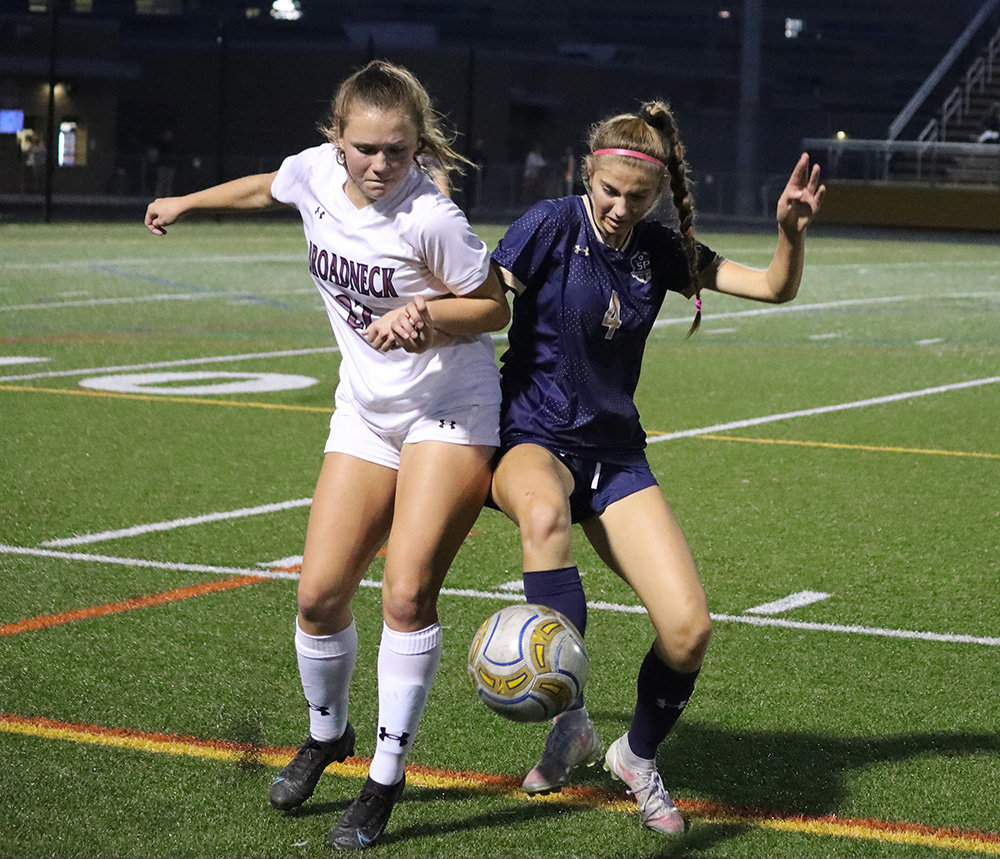 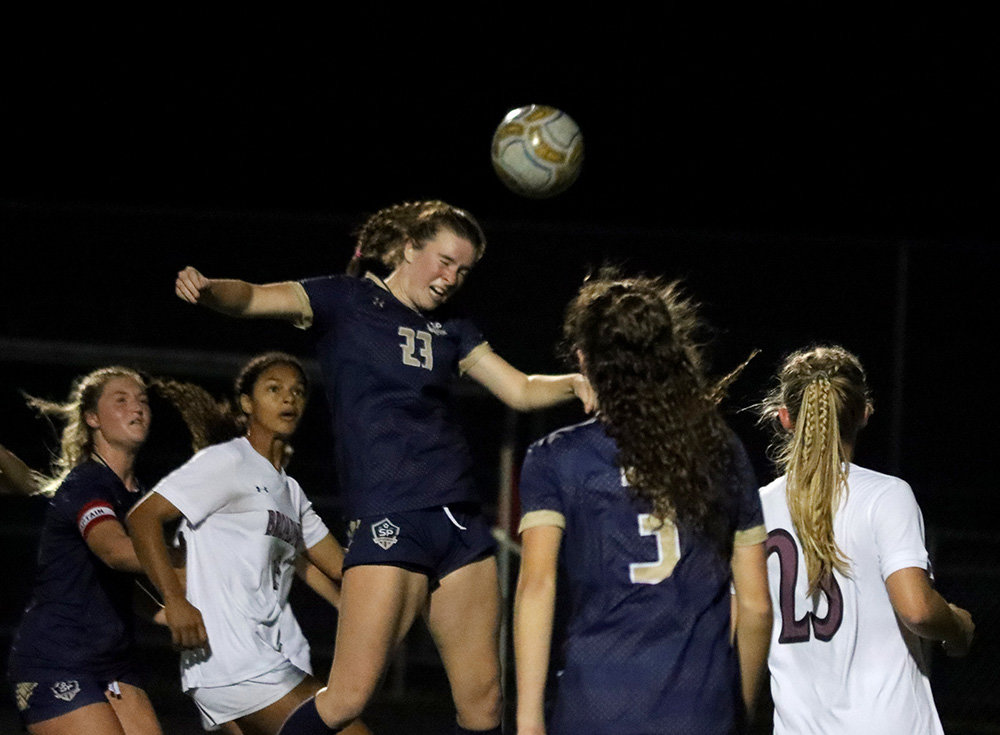 Ryn Feemster jumped in the air on this header.
Photos by Dennis McGinley 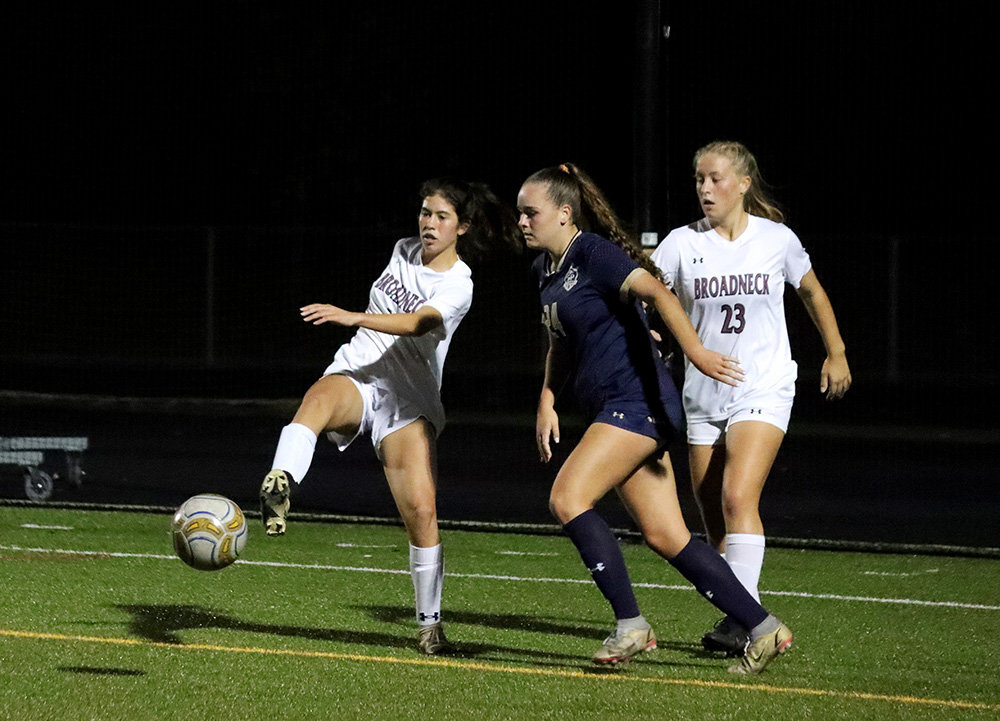 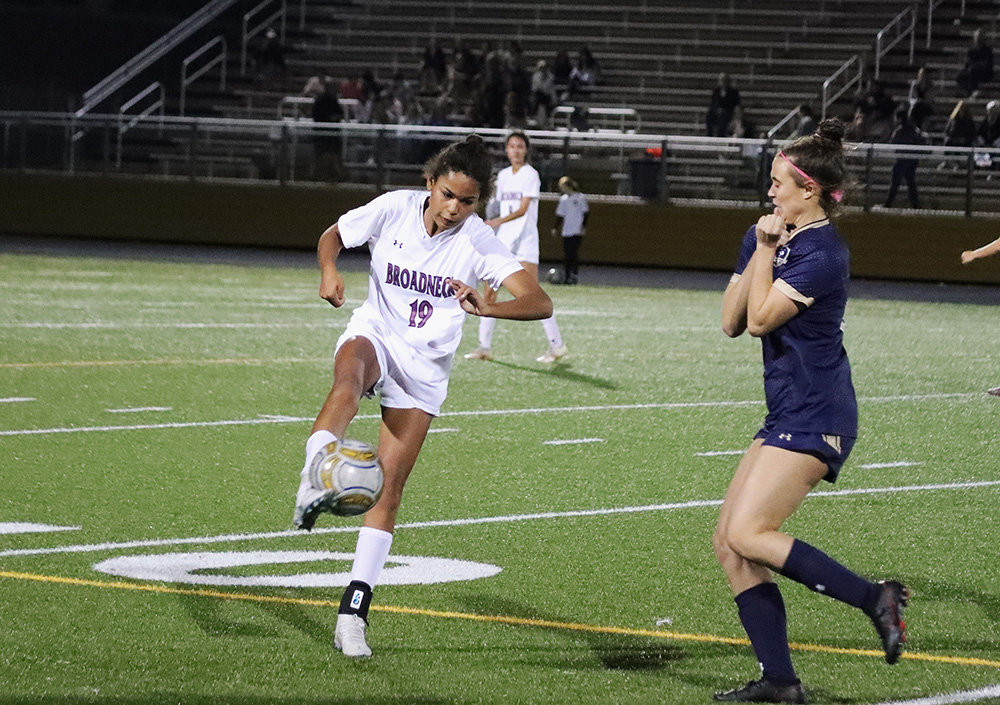 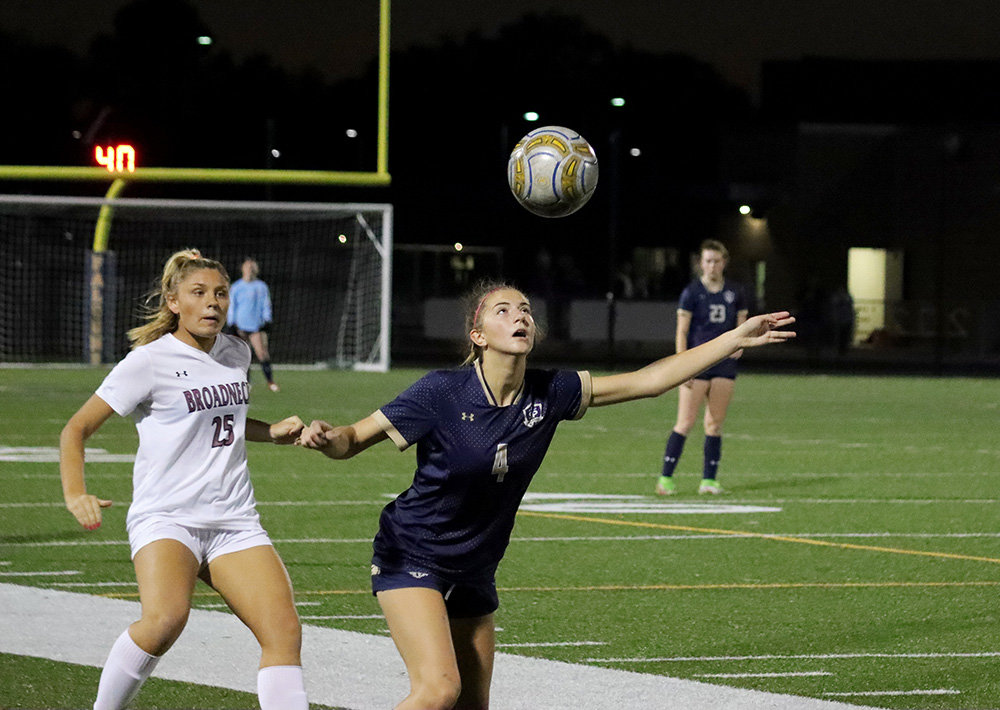 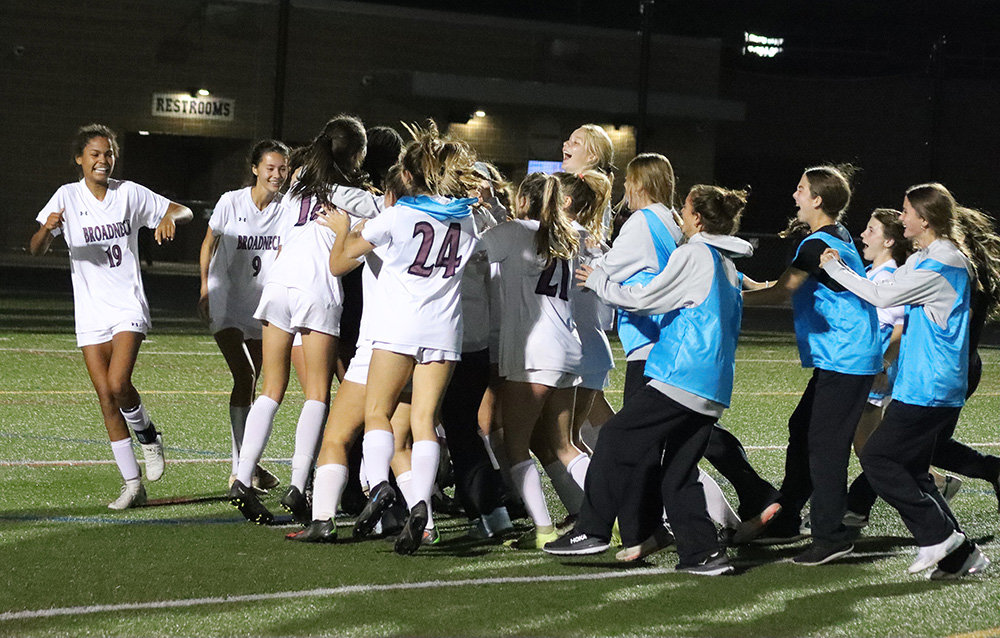 The Broadneck girls soccer team celebrated after defeating Severna Park 1-0 to win the region championship on November 1.
Photos by Dennis McGinley
Previous Next
Posted Thursday, November 3, 2022 11:57 am
By Dennis McGinley

In a highly anticipated rematch between two perennially strong programs, Broadneck girls soccer defeated Severna Park 1-0 to win the region championship on November 1. The Bruins advanced to the state quarterfinals where they will meet county rival Arundel Friday night at Broadneck High School.

Severna Park and Broadneck had battled to a scoreless tie in their regular season meeting, so it was no surprise that this game was tight throughout. Sadie Wilkinson's penalty kick with six minutes remaining in the first half was the difference, as Broadneck withstood a furious second-half barrage by the host Falcons.

The first half was played largely between the 18-yard penalty boxes, with just a few scoring chances. From about 25 yards out, Broadneck's Maddie Capps hit a shot that went just over the crossbar early in the half while the Falcons’ biggest threat was a shot by Francesca Dunoyer that forced Bruins keeper Kyleigh Bland into a diving stop. After a handball in the penalty box against the Falcons, Broadneck forward Sadie Wilkinson calmly stepped up and buried the shot.

The second half was a different story, with Severna Park maintaining possession in the Bruins half and creating several scoring chances. Broadneck, having played many close games throughout the season, relied on a defense led by senior Lilly Kelley, junior Lily Trout and freshman Ellie McGilvray, all of whom remained composed in the face of constant pressure. Kaitlyn Young ran onto a dangerous through ball and looked poised to challenge Bland before teammate Natalie Crooks swept the ball out of danger. Just minutes later, Falcons midfielder Hanna Verreault sent a shot inches over the crossbar. Severna Park left back Emerson Scott put the Bruins back line under constant pressure with pinpoint long balls into space and one of those balls led to a cross by Young that went untouched.

With about eight minutes remaining, Falcons forward Kasey Thompson found a loose ball in the box, but her attempt was just wide of the left post. Two minutes later, forward Sydney Holmes found herself one on one with Bland. The Bruins keeper smothered the attempt to preserve the lead. As the final whistle blew, the Bruins engulfed Bland and celebrated their victory with a sense of relief.